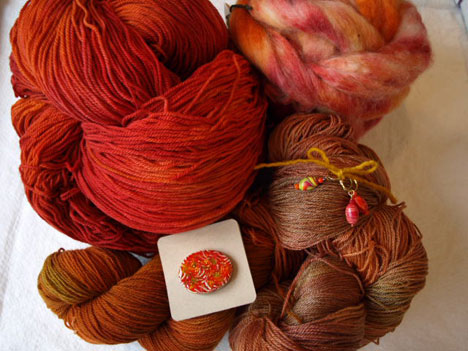 before i talk about anything else, here’s the news we’re all waiting for: the lucky winner of this glorious basket of briar rose yarns and goodies goes to emily!

once again, from the bottom of my heart, thank you, THANK YOU to everyone who participated in this year’s booster campaign for claudia’s ride for MS. and a special thanks to chris at briar rose fibers for providing this delicious incentive to the cause.

what a weekend, whew.
friday feels like a week ago, really. after i wrote my last post, i did indeed head outside to stretch my legs and shake off some of the friday ansty-pants that some of us are prone to.

i decided that since i wanted to spray the next day, i should collect all the produce that was ready for picking and that way, i could let the spray and fertilizer dissipate for a couple of days before i pick again (though it is an organic product made from plant roots, it’s a good idea not to eat it directly, heh) 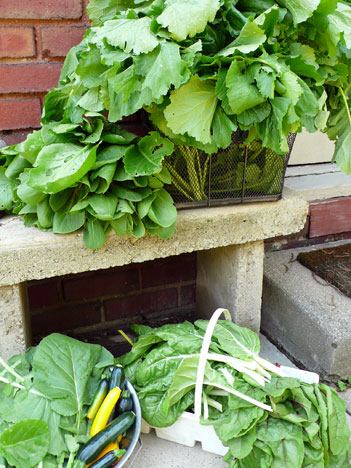 uh, yeah, there were a few things to gather out there. i pulled up all of the rapini—i estimate about 4-5 pounds from just a 10-foot row (have i mentioned how gratifyingly prolific rapini is??)
then i picked some chard, some zen greens, and quite a bit of bok choy. i also took some more squash in because the plants are so loaded with small ones that i thought it would be a good idea to thin them out. i want a few squash to grow bigger so i can have freezer amounts. 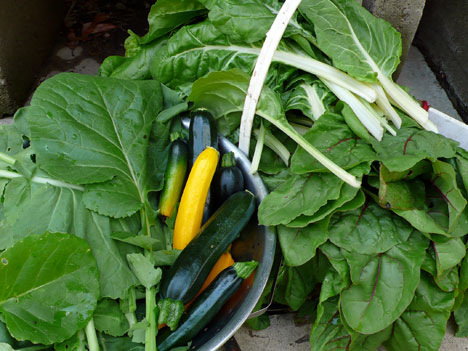 i spent the next couple of hours cleaning and blanching everything, then packing it in bags for the freezer. i ended up with four heavy bags of rapini, two chard, and two of cubed squash, plus a HUGE bag of bok choy and another of fresh chard to eat. 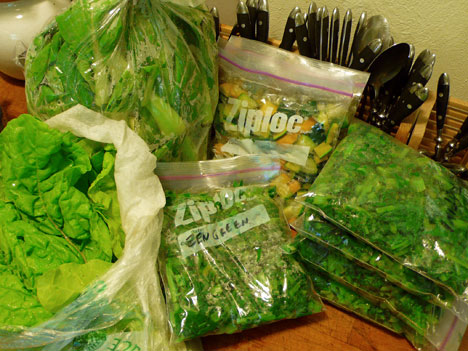 and that’s just the first picking really . . . i think we have enough rapini—i’m not going to plant more. it was good to know that before i headed out to reseed on saturday. i planted more chard instead, since that’s something we like enough to eat every week—we almost can’t have too much of it. the chard i saved out for eating this week is a european variety called erbette, which is a leafy chard that has a buttery, delicate texture and flavor and i very good eating. mmm

yesterday i got the aphid situation under control out there, applied some seaweed fertilizer, and reseeded the areas where i pulled up plants.

i worked at my desk for a little while in the afternoon until david asked me to go out for a bike ride, which was really excellent—perfect weather for a very fast, hard ride to clear the head. nice. when we came back, i made a quick stir-fry 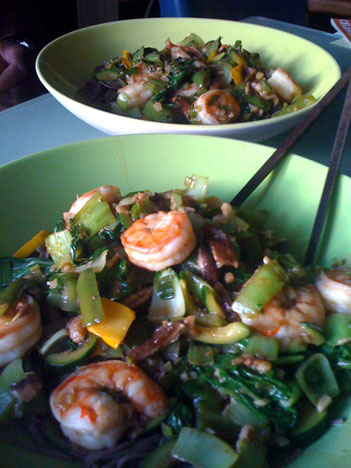 with the bok choy, squash, and peppers from the garden along with shitake mushrooms, shrimp, ginger, etc over soba noodles. that hit the spot.

i know—i haven’t mentioned knitting at all yet, but i’m getting there. 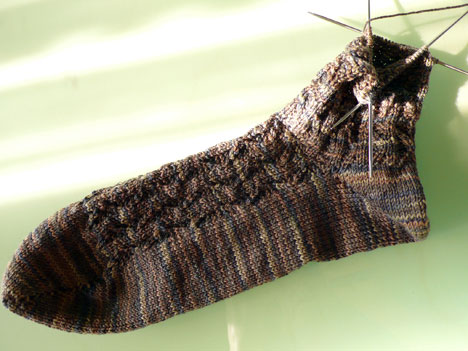 i’m making good headway on my dark regatta sock and the pattern is working out well—i think we’ve got it nailed. barbara is enjoying her test knit and even worked her first short-row toe and heel without a hitch (THANK YOU barbara!)

i admit, i’m not getting as much knitting accomplished as i wanted this weekend (for lots of good reasons) but i think i still have time to finish a scarf, at least.

this morning i was supposed to be up bright and early (however, i actually roused myself just in the nick of time, heh) to head out with my spinning class to the woolfest at lake metroparks farmpark in kirtland, OH. this event takes place each year at a working farm which is run by the lake county metroparks commission. when we purchased fleeces at the wooster show in may, jamie from wooly knob fiber mill mentioned that he could have our fleeces done if we’d pick them up at the festival—a road trip was born. 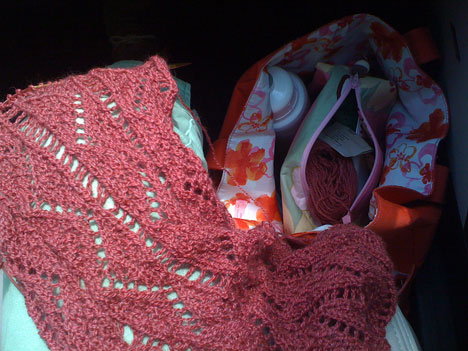 on the way up i worked on pompa and added several repeats to the length; i tried to pick it up again on the way back but opted instead to rest and talk. sometimes, you gotta . . . 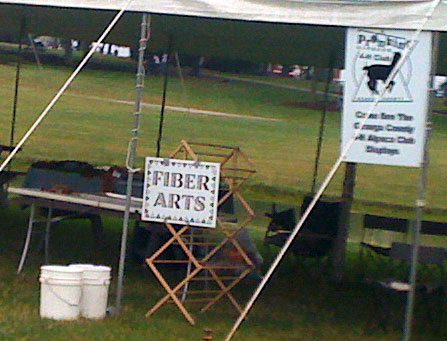 we arrived at the park around 10:30 am or so, just a little ahead of a rain shower. the grounds are beautiful there; just past the gate we found ourselves walking through gardens and exhibits featuring park projects. all the way to the main barn where the fiber show was exhibited, we were able to stop and see sheep, alpacas, and lamas. 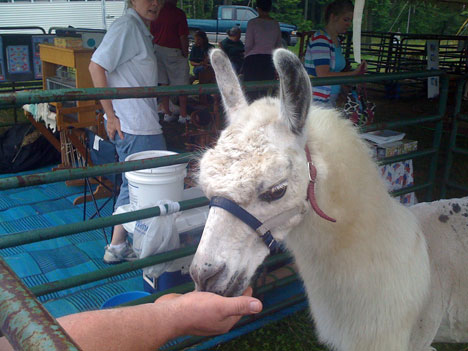 once inside, the main arena was a-buzz with vendors and attendees, many more than in previous years that i’d gone 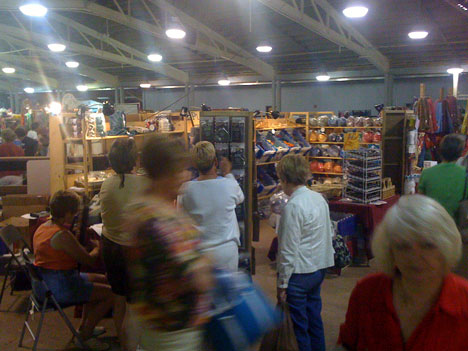 the photos aren’t as great as they could be, but they’re passable; i used my iPhone camera for this trip because it’s so easy to slip inside my bag and use on the road.
we met up with some of our favorite vendors 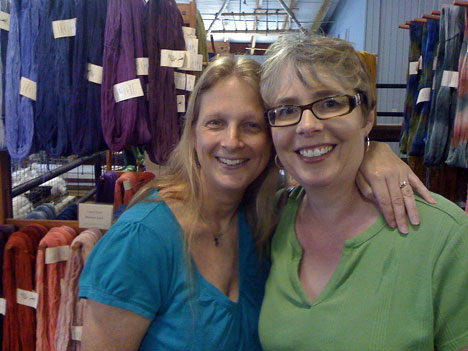 linda bought some of catherine’s classic merino sport to knit up an ondule sweater. linda seems to have done a wonderful job of hiding from the camera all day, so anne marie takes her place in this picture. 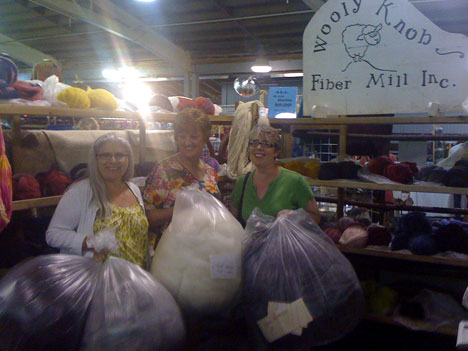 we picked up our fiber from wooly knob—scary, isn’t it?? actually, the fiber susan (left) is holding is ALL hers, but the other two bags are two fleeces that are getting split amongst the rest of us, so not too bad. anne marie and i are splitting a blend of brown finn that is perfectly delectable. our stunning, blue-ribbon white coopworth fleece (below, right) which we had blended with some nylon to spin sock yarn turned out very well—we’ll be splitting that one six ways (it’s about ten pound i think). 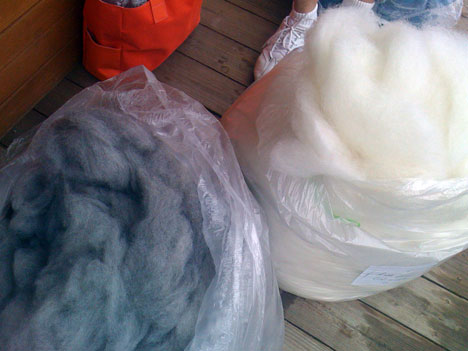 and yet, i was coveting susan’s gray BFL (left) anyway. this was our second choice for the sock fleece and we waffled over it for some time, but decided on the white one in the end. whereby susan snapped up the gray anyway. you know—to go with the dark brown shetland fleece she bought a day earlier, hahaha. 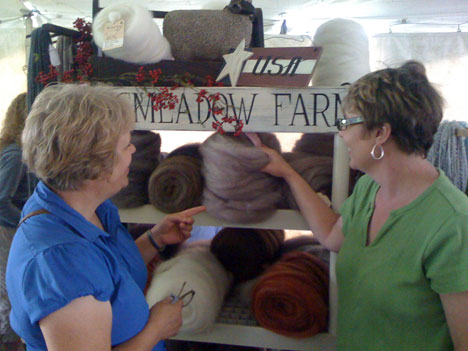 we discovered a wonderful new-to-us fiber producer from western NY state at the longmeadow farm booth (sorry, there does not appear to be a website). sandy has some seriously beautiful fiber blends available in gorgeous colors and almost all of us succumbed. linda bought a stunning intense rose blend, while barbara opted for ocean blues, and susan for greens.

anne marie and i resisted—she’s on a fiber diet and my workspace can’t take any more until the construction is over. plus, there’s always a next time . . . in fact, sandy will be at the finger lakes fiber show in hemlock, NY in september.

we definitely took some time to watch the animals today, too 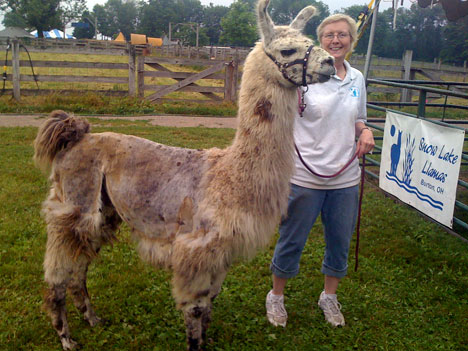 i thought this partially-shorn lama looked really interesting (ok, i thought he had a special, showy haircut, but no—just not done). 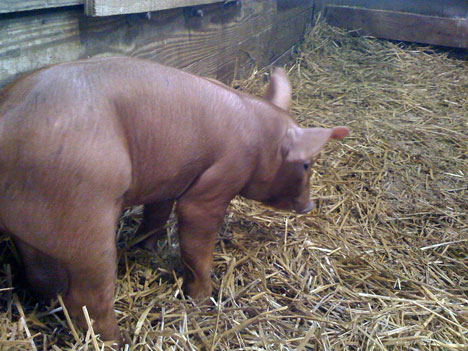 and for me, no good fair is complete without pigs—i just love ’em.
we visited the sheep too and were completely smitten with this little finn lamb—about the size of a terrier—just adorable (hand added for scale). 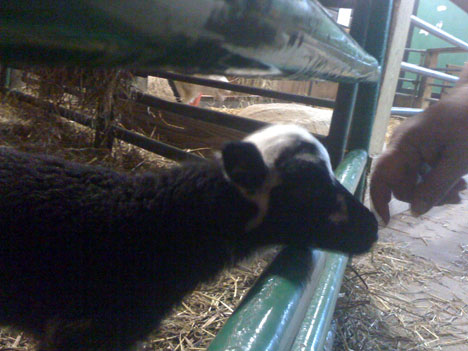 but its sibling was the one that really stole the show for me, giving mama a little hoof love 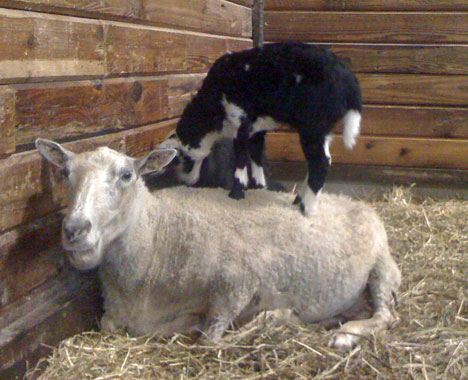 in the middle of the afternoon, we headed back back to the car via the horse-drawn trolly, trying to figure, i think, how the heck we were going to spin up all that fiber. 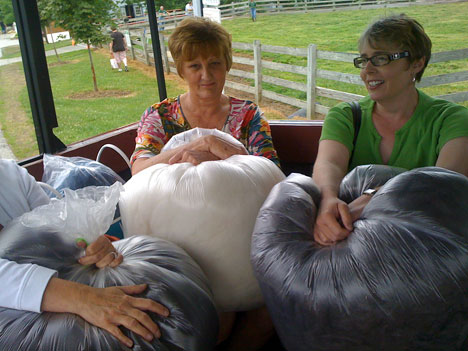 good thing it doesn’t go bad . . .
at the end, the horses did a little posing for the camera, just like the nice lady asked them to 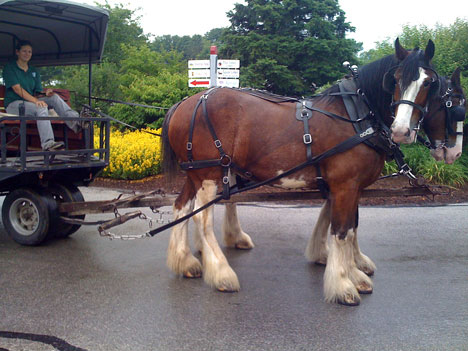 how could i not take a picture of that?
well, it’s late now, this post is WAY overdue, and i’ve got knitting to do—i’m going to toddle off and see if i cna stay awake to put some more inches on my scarf.
see you in a couple of days.