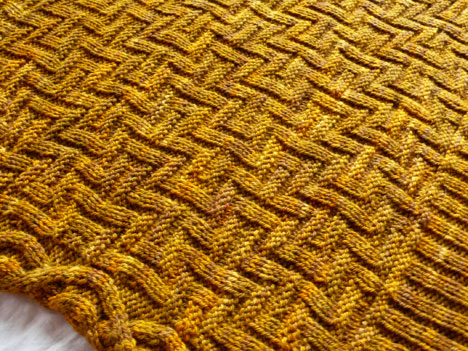 mmm, gold.
we have some inside and out—the black eyed susans have bloomed just in time to celebrate my new FO. these are one of david’s favorites. 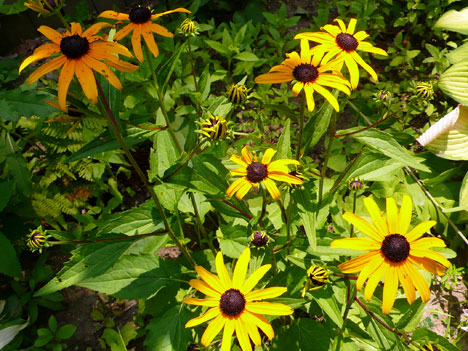 finally we had some rain yesterday. not an all-nighter, but on and off for a few hours anyway. enough to perk things up outside for a bit (but we could use a lot more). from my spot on the bench near the back door, the morning air was still a little crisp and smelled of damp earth—that was nice. 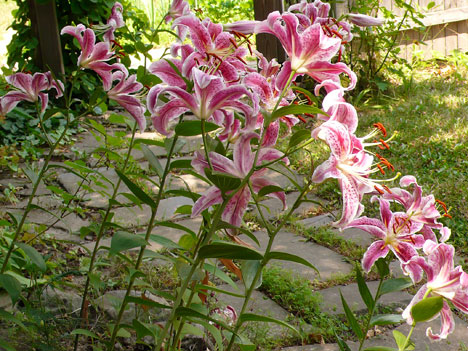 well, of course it rained—yesterday was blocking day. it wouldn’t be right to get the whole living room floor covered with wet wool and then let it dry in just a few hours, now, would it? 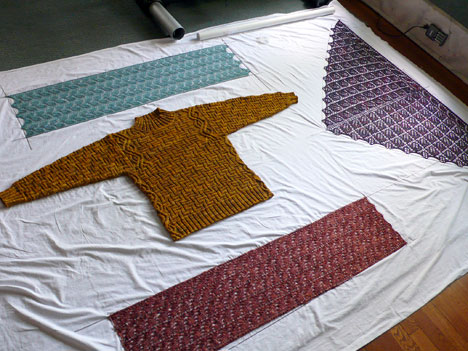 my friend debby came over to visit and we blocked a few of her things. i’d stayed up til the wee hours sunday to finish sewing my sweater in a one-night hiatus from the bee thing (which i made up for in class on monday). i washed it yesterday morning, using the hand wash cycle of the machine—the way we handle all our woolens.

i laid it out on the porch because the morning was breezy, warm, and dry. i gave it a bit of shaping but not much—it came out of the washer pretty much the size it was supposed to be everywhere. 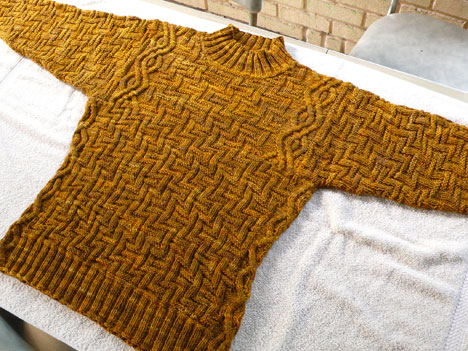 after my class left at 6pm though, the air had turned chilly and damp with rain, so i moved it inside where it could dry better. this morning i got a few nicer shots 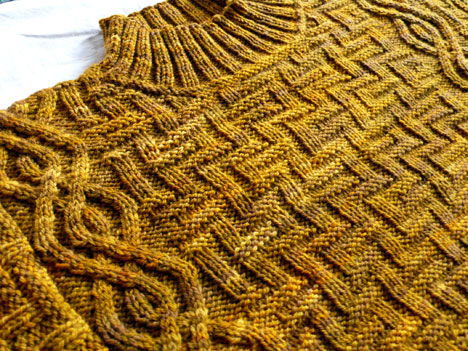 i know some people expected that the texture would flatten and disappear when washed (and that’s a valid concern), but i think it stands up very nicely to blocking (the quality of the yarn and gauge affect this too, of course).
and the fabric—wow—this is one of the most comfortable fabrics i’ve knit lately. 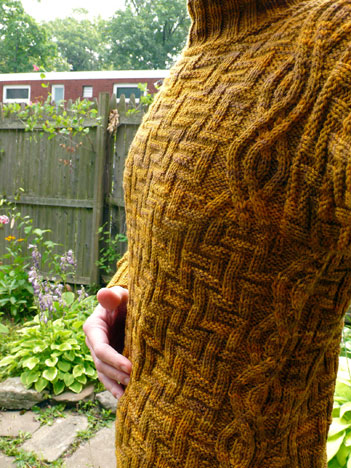 truthfully, it’s still an eensty-weentsy bit damp inside so i’m wearing it a bit gingerly (and my head is cut off because i tend to grimace when i take my own modeling shots, heh—not attractive) 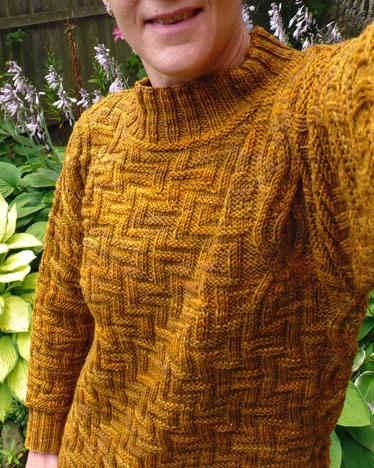 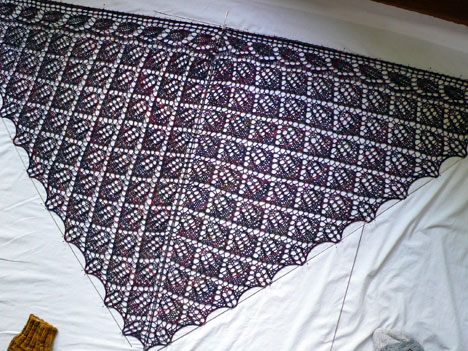 it’s a beautiful dark-wine-and-midnight-blue colorway; a gift from chris when debby contributed a square to a charity afghan last year. 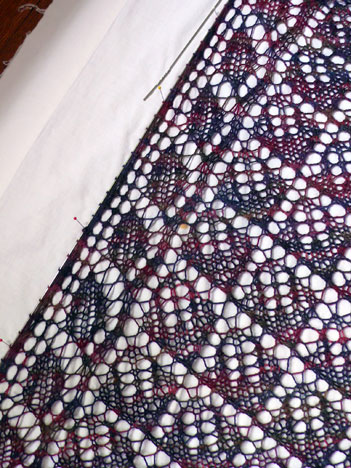 then she had an elm row scarf she just finished in louet mooi, colorway aqua 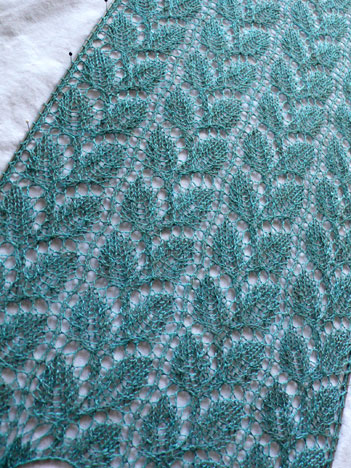 i just love the sheen of the silk and the halo of naturally colored brown bison fiber that rises from this yarn. beautiful . . .

and we also blocked a rivolo scarf, knit up in woolen rabbit harmony sock yarn, colorway moroccan spice (i think). 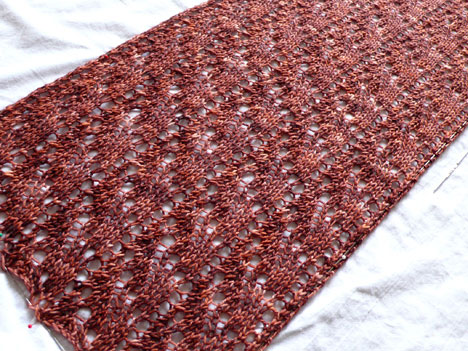 it was such a nice afternoon; we spent hours just pinning and chatting—or not—then knit until the rest of the gang arrived for class. i worked on the Bee Thing (that’s its new, temporary blog name) and got another repeat finished. i sent everyone home with a bag of greens, squash, peppers, and beets, then david and i sat down to a nice supper of leftovers for ourselves.

after dinner i did desk work for for just a little while, then spent the better part of the evening working some more on the secret project. 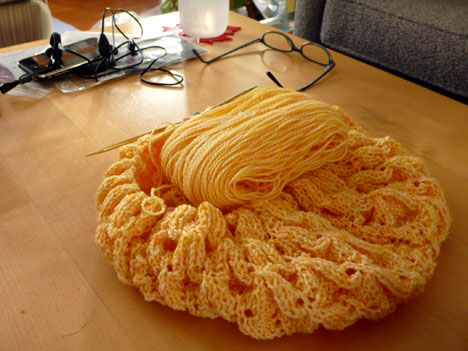 you can see it’s grown a lot, right?? i’m almost done with the first section and i’m looking forward to the next one—that’s my favorite pattern in this project.

well, i took a break from writing my sweater pattern to do the blog, but now it’s time for me to get back to work. see you next time . . . and maybe between now and then we’ll have a little treat. 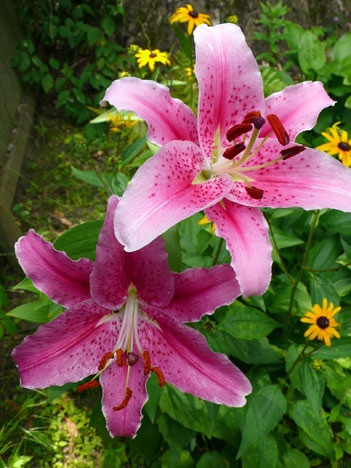 31 thoughts on “another quickie; now with blocking prøn”