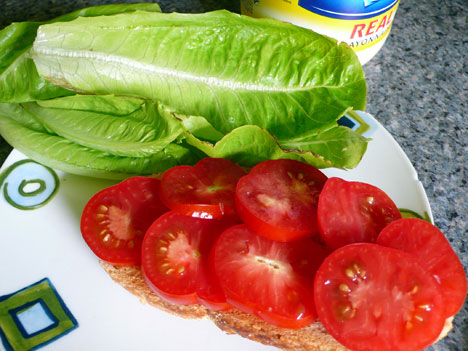 no new flowers today but here’s a taste of what i’ve been eating for lunch every day this week. mm-mmm—nothing like it. i can’t get enough.

we’ve had several days of heavy rain in a row, following several weeks of extremely dry weather. such a relief—not that it’s been hot, but the dryness really gets into my skin after a while.

the other day david came into the house from the yard, sat down, pulled his pad of paper in front of him, and said (very seriously): anne, we need to talk about the tomato plants

after choking down a giggle i said yeah, they’re awfully big.”
just as a reference, i give you this: 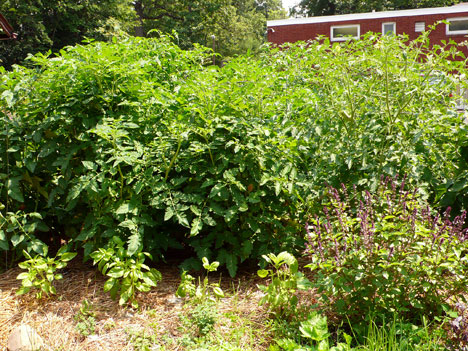 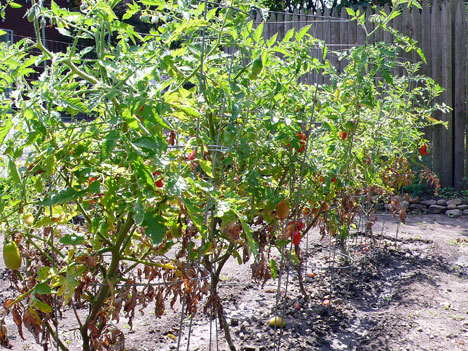 since it started raining, they’ve grown visibly, if you can believe that’s even possible. there are a couple that, when the vines are completely extended, measure at least 12 feet in height. yikes.
plus, the weight of the water is pulling down the vines and they are now crawling all over the peppers and the ground. so it’s getting to be a mess out there. 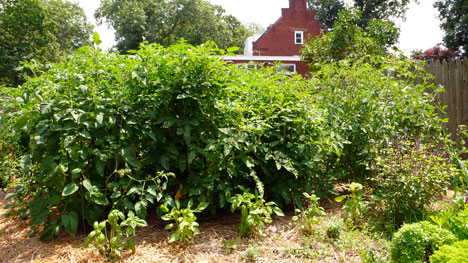 (buildings are same size as always)

david: you are not going to be able to penetrate the vines to pick when the tomatoes start ripening
me: oh, i think i can squeeze in—i might have to crawl, though . . .
david (looks at the ceiling): i don’t think it’s possible. is there any reason why we can’t lop them off along the tops? you might lose some, but—
me (shrieking): NO. (calmer) well, at least, i don’t think so. i never heard of anyone doing it
david: did you ever know anyone who had to?
me: no
(long silence—david is really good at waiting me out)
david: i underestimated how big they could get; i should have used much bigger cages to support them
me: we-ell, i really don’t think anyone could have predicted what’s happening out there. i guess i could call cooperative extension and ask an agent.
or ask the blog . . .

so i’m asking: does anybody know if it’s ok to prune tomato plants at the top?

most days i i find it’s a good strategy to go out and look for what’s ripe and remain in total denial about the overall picture.
and what’s ripe has been so yummy—correcting the soil not only gave a growth boost to the whole thing but made it all taste a lot better, too. 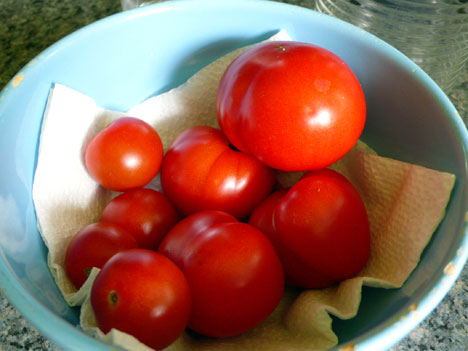 i’m picking a few of these every day now—they are ripening later than usual but it’s been truly chilly most of july. in fact we are about to break a record in NE ohio for the coolest july weather. still, not too shabby on produce—the fridge is full and i’m giving it away to everyone i know. 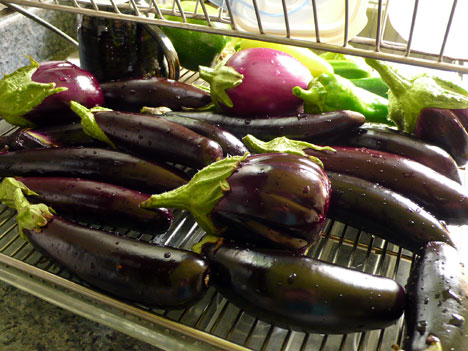 the other night i went out and picked all the eggplant that was hanging low near the ground—the plants are really loaded with fruit and i figured taking these in would lighten the stress and help the rest grow a little bigger. we’ve been eating eggplant for the last couple of weeks, but this was more than we can use at once.

so i cut them in chunks, tossed with olive oil, and roasted on cookie sheets til golden. once they were cooled i put them in ziplocs for the freezer. i’ve done this with excess eggplant for the last two years and it is an awesome way to save it for later—they taste really good cooked in pasta sauce, curry, or a mid-winter batch of ratatouille.

tomorrow it’ll be time to pick greens again but i think a couple of the spinners may want to take some home, and then there are more knitters coming on monday . . . 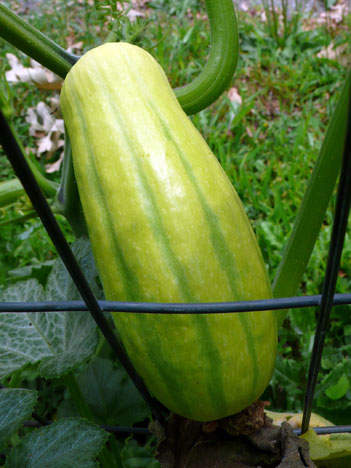 the winter squash is coming along nicely too—i planted a seed mix so it’s a surprise what types we’ll end up with. i know we have at least one acorn squash and whatever this is (possibly muscat de provence?). the plants are growing right through the fence out onto the back street; every week or so i go around and re-lay the vines where they won’t get damaged from car tires.

i bet you think i’m running on about the garden because i haven’t been knitting. well, yes and no.
i HAVE been knitting a LOT, but . . . all the progress is on big projects where it doesn’t show much (at least, not to me) 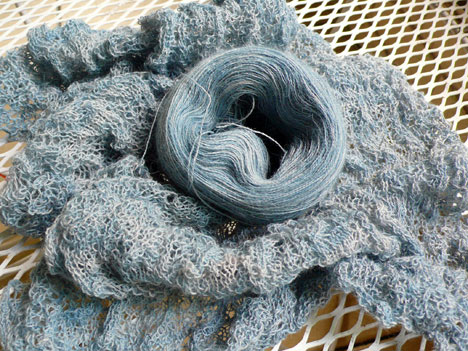 every night i add at least one repeat to nightingale and it’s finally looking a lot longer.
not quite long enough to say it’s almost done (i haven’t measured, but i can tell it’s not there yet).
i’m contemplating leaving it be until i go away next week; this piece is at the point where it would make excellent plane knitting—i know the body pattern by heart though i still need the chart for the edging (but it’s a small chart, easily totable).

and i’d rather finish off the bee thing before i go—that would save a lot of hassle, since it needs to be blocked before the gifting deadline. if i finish it by next weekend, i could block it before i go. then, david could ship it to its final destination just before he leaves so as to be there when it arrives (very cryptic, i know, since i haven’t explained our august travel plans yet—more on that next week).

i’m well into my second ball of yarn and a little ways into the swarm pattern of the middle section (see the wittle bees?). this is my favorite pattern to knit in this piece (i dunno why).
i have hit that point though, where the rows are starting to feel long and i can only complete about four per hour. i keep thinking i’m less than halfway through, so why does it feel so big, so soon? 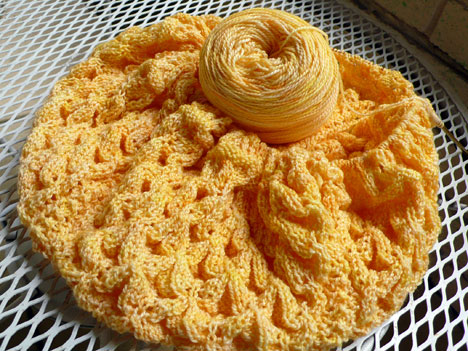 probably the biggest reason it feels like it’s slowing down is that i’m not knitting on it enough. and when i do, it’s late. so if i put down nightingale for just one week and motor on the bee thing, maybe i can make it.

i’ve also been thinking a lot these last two days about my travel knitting (besides nightingale). i’ve swatched for a new big project in a yummy yarn that i might take along (not sure yet) 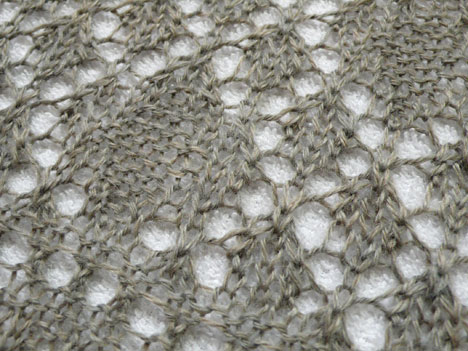 but i’m feeling a need to get some small projects on the needles for traveling and socializing. i’m jonesing for a sock project (it’s only been a week, but i miss them!) so i’ll definitely pack the two nate mates that need to be finished. and i have mitts on the brain—fall is just around the corner. a neckwarmer also makes a nice travel project, hmmm.

i had to go through my stash today to find a few things to send my niece who requested a yarn gift for her birthday. and it really got me in the mood for knitting fall accessories . . .

ok, now, i’ve got a bee thing singing my name in the other room; i’m going to answer the call. 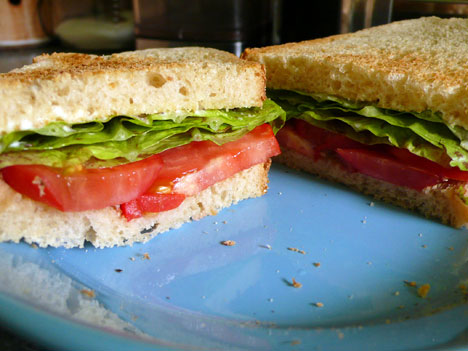 40 thoughts on “knitting, but not much happening”