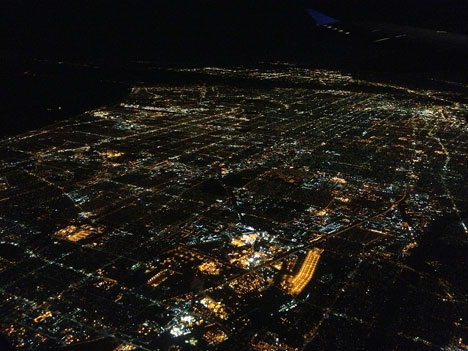 hi everyone; boy did i miss you! and what a week it’s been; i barely know where to begin. i feel like it’s been weeks since we visited; i’ve flown across the country with barely a whisper about the last weekend of my trip—but hey, i took a picture . . . that’s the view of LA as as my east-bound plane took off last sunday at midnight.

i had lots of knitting planned for my flight home, but i barely touched it after all—i cavalierly packed only my shawl project and a sock to knit on the plane and as soon as i settled in to work, i hit a snag with the way i had set up my hem chart, so i had to put that aside. 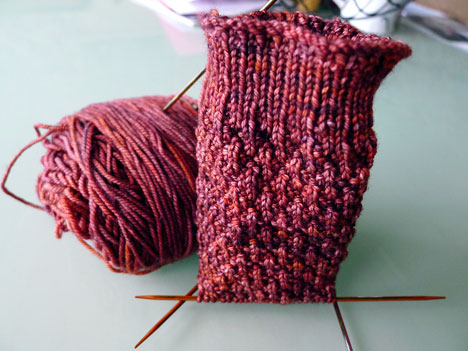 i had put several inches on my sign of four sock while eating dinner and hanging out with cookie A earlier in the evening. so i took that out in an attempt to extend the roll i was on with it. but the plane was too dark (as usual, i was the only passenger with my reading light on, haha) and my eyes were too tired, so the knitting was slow. i knit for a while, but fell fell into fitful dozing somewhere over the far midwest. 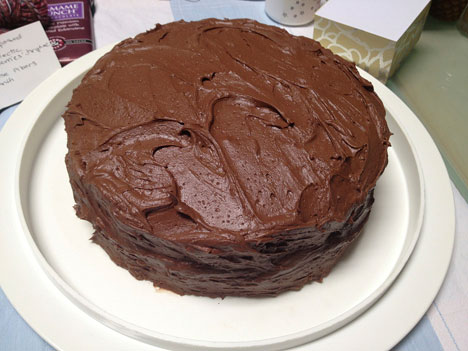 it’s always good to come home to david, but it was especially nice that at the end of this trip, a chocolate-frosted butter cake was awaiting my return—we had a birthday to celebrate. one day after the fact, but in this case, better late than never. 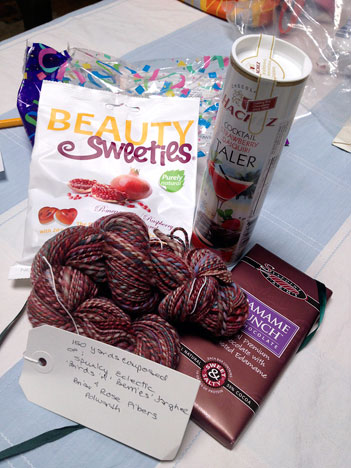 there were several lovely gifts to open as well, including this goodie package from our good friend phoebe, who is a long-time blog reader and test knitter, but most importantly a wonderful friend. each year she sends me a skein of handspun and some goodies; it’s so sweet! BTW phoebe, erica ogled that skein of yarn the whole time she was here this week!

i had a funny card from kim 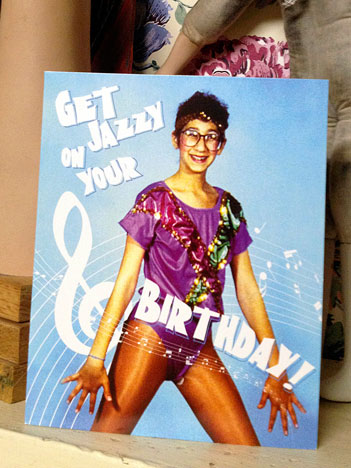 which makes ME laugh every time i see it because i can hear her laughing so hard; she really gets a kick out of jazzy girl, here (i sure hope this isn’t one of our readers; do you ever wonder about that when you look at these vintage cards?).

after a good, three-hour nap and a shower, it was time for monday knitting class, which i always look forward to. we missed two sessions this month, so i was very ready to knit and listen all the news and knitting woes.

while i waited for them to arrive, i unpacked another item which arrived that day—a box of citrus fruit picked by sam, which i’d mailed home from kim’s house. 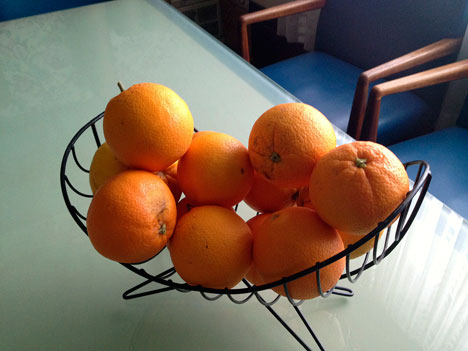 omg, the grapefruits are so sweet we are eating them like oranges. i arranged a bunch in the fruit basket and sat down to eat some while i contemplated the scene outside. 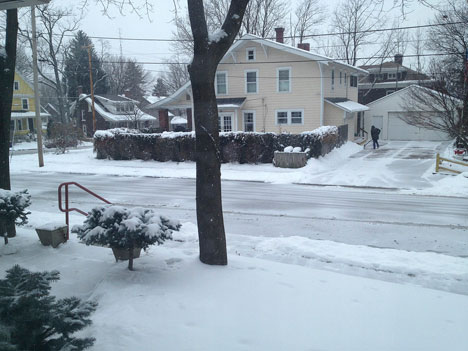 ugh! SO not in california any more . . .
the whole first part of the week was like this, in fact; cold, snowy, windy, brrr. not quite nasty enough to cancel class, but not nice enough to keep our dinner plans for afterward either.

debby brought one of her famously delicious chocolate cream pie—a big piece of this was definitely in order. i had pie for dinner and cake for dessert on my birthday—that’s just about a perfect celebration, wouldn’t you say?

once everyone left i realized that david had gone upstairs to conk out—he’d been working triple time all week, poor fella, and was exhausted. between the debut of our bare naked wools and preparing for the first 2013 BNK club shipment, he was buried and desperately in need of downtime. 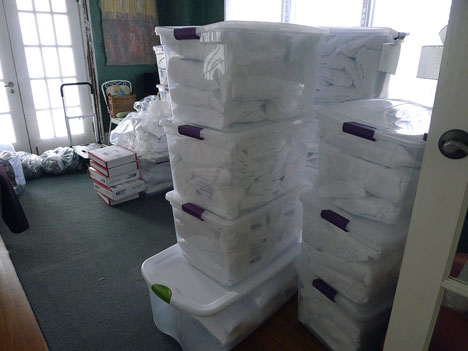 our place has been a veritable beehive all week—all hands have been on deck for packing duty to get yarn order out and club packages put together.

erica is beside herself with excitement, haha; when she finally arrived on wednesday, she had her computer set up within moments and was snooping into everything; of course i was excited to show her all of it too. it’s been quite a while since she she was here last. by friday, she had taken over the blog and well, if you read the last post, you know the rest.

we had an extremely intense three days of working here; we still didn’t get to everything on our punchlist, but i’m planning to be up her way in a few weeks to knock out the rest of it. 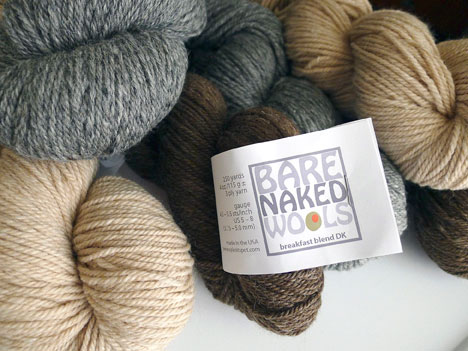 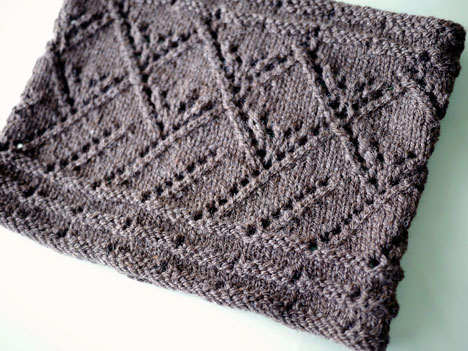 it’s really no wonder; the yarn is luscious and the DK is so snuggly for the weather we’re having right now. and if that wasn’t enough, it practically knits itself. 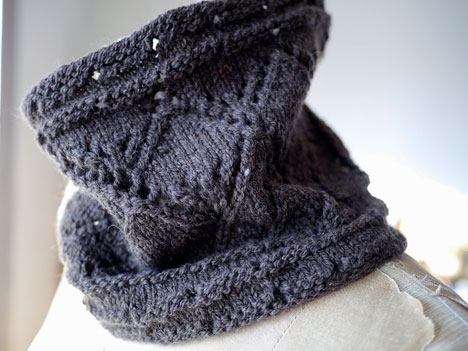 because we didn’t have anything knit up in the new burnt toast colorway, i cast on friday morning while erica and i were working for a peu de pluie cowl. she looked at me like i was crazy—”oh, just what you need—another project!!” (i was gonna knit the hat too, but agreed to let her ask someone else to do that). 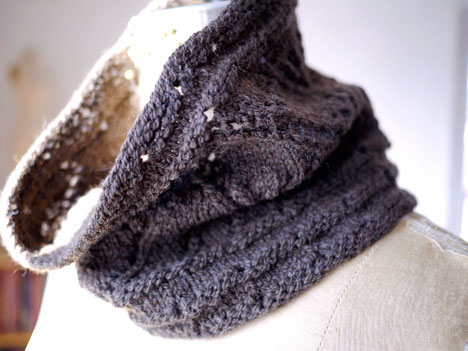 sigh, look at that drape. and yet, it’s a cozy fabric, dense enough to shut out that nasty winter wind.

i knit a few rounds that morning, but had to rip back because i didn’t read the pattern first. most of it i knit while we watched a movie that night—seriously. i think invested all of three hours and about half a skein of yarn in this project. 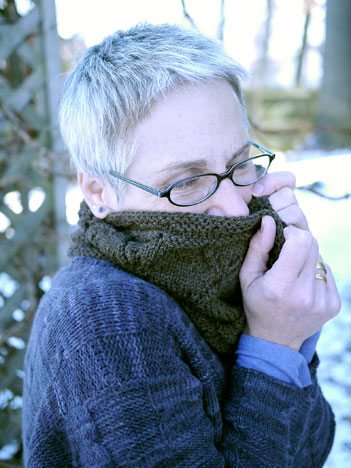 by the time erica left on saturday afternoon, it was washed, blocked, dry and photographed (thanks to the heat vent in our office).

i used a size 4.5 mm needle because i thought i’d like a more relaxed favor, but erica says she would prefer a stiffer fabric that stands up more and if that’s the case with you, then stick to the size and gauge stated in the pattern.

this pattern isn’t supposed to be available for another month, but because it is so perfect for the BNW breakfast blend (AKA BNWBB) i’m thinking of asking the clubbies if i could do a switch and release this pattern next weekend and the sky ladder pattern for march. because as it happens, our next BNW yarn offering coming forth in march will be a match made in heaven for the sky ladder package.

that’s right—there will be a whole new yarn added to our collection next month; can you stand it??
it’s actually on the premises as we speak, but we are holding it back so our bare naked club members can be the first to see, feel, and knit with it.

in the meantime, ultra top-secret knitting has commenced. 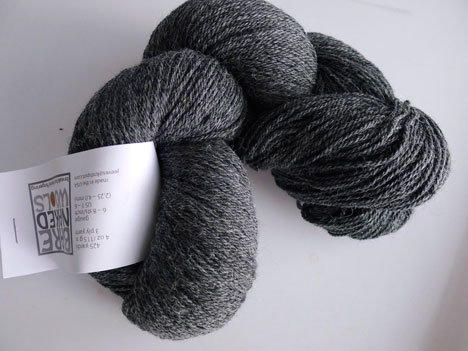 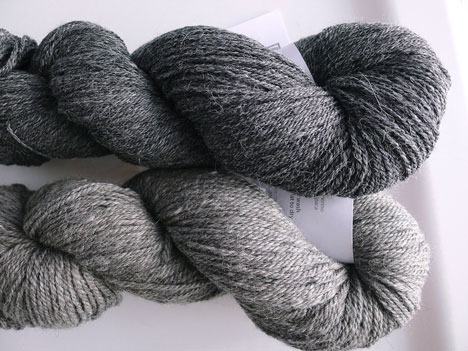 what should i do with my leftover burnt toast?? my cowl used just a tad more than half a skein; i still have nearly two ounces left (about 115-120 yards). hmmm, i don’t really want fingerless mitts . . . maybe i need to knit another cowl? i’ll let it talk to me while i work on the infinity scarf . . .

thursday is valentine’s day and our neighbor bret has created a dandy of a valentine this year to celebrate. we have a special feature post cooked up that we needed to photograph before erica left town. so yesterday, we donned hats, scarves, and warm coats to brave the cold and get our day shots done. 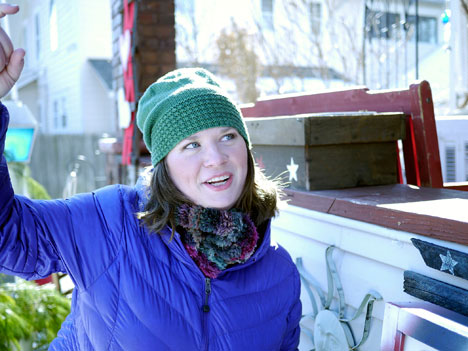 halfway through, bret came running out his front door to see who the heck was sneaking around in his bushes. when he saw it was us, he burst out laughing; he had been all set to start shouting. here’s erica in her slöfock cap, explaining to bret how we were trying to get a shot of ourselves near his newest prop. 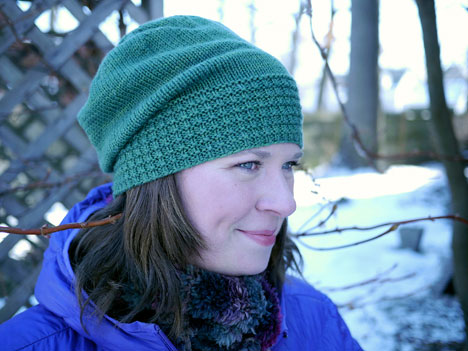 and here’s a closeup in my back yard—the hat is knit up in shalimar yarns breathless DK, colorway emerald isle. she’s all set for st. patrick’s day now.

now she’s gone home and we are getting back to normal—only for a bit though; i’m hitting the road again next sunday, so i need to get the first BNK book chapter done as well as plenty of other work this week.

i will try to get back to blog in a couple of days, hopefully with some nice progress on that infinity scarf. and i think we’ll have some sort of pattern release before the end of the week as well, though as i said earlier, it’s a little up in the air which pattern it will be.

i’m going right now to beg the club’s leniency with my petition; wish me luck!

11 thoughts on “beyond exciting”