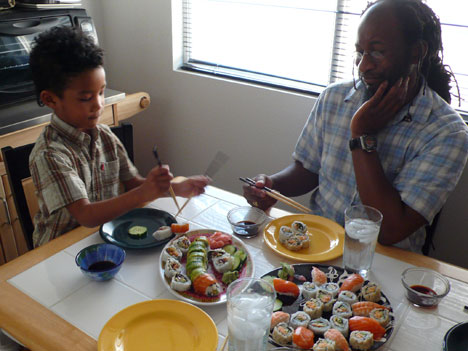 i don’t know what i’d do if i had to go nine months without eating sushi. pregnant women do it all the time now, but nan, for one, was quite ready by the other night to have a nice sushi dinner once again (and we readily agreed, mmm).

you can tell when a new mom is getting her energy back—all sorts of things she wasn’t interested before are suddenly appealing. 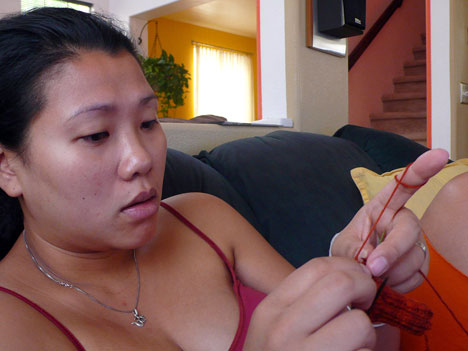 nan learned to knit back in grade school, but was completely uninterested in continuing it into her teens and adulthood. she grew up wearing handknit socks from grandma, which she says she didn’t appreciate as a youngster, but later loved quite a lot.

we emailed a bit about getting her back on the needles and when she saw amad’s socks materialize so quickly, decided she’d give it a go (yay, nan). yesterday, while the baby slept (and slept—he’s very good at it!), we got her started.

actually, she remembered quite a lot about making stitches and reading her fabric—i didn’t have to show her too much in the way of technique at all. she’s trying to learn the sock pattern by formula so as not to have to deal with the written instructions. that makes things a little harder, but in the end it will be helpful to her in making any size of basic socks.

we started with tiny socks, using the oh, baby pattern as a guide, so she could work through all the steps quickly and make a duplicate one to reinforce the pattern. by early evening the first one was complete 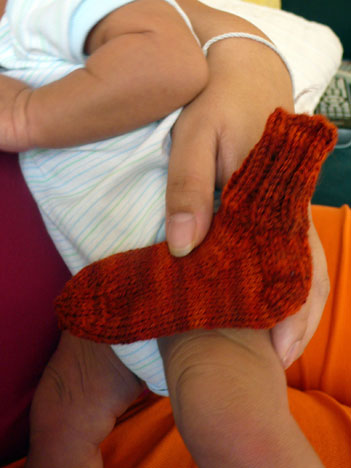 (i know it looks huge, but we are talking about whitfield feet).
it looks beautiful, right? nan is using the leftover grandma’s blessing from the nate socks i knit at summit. 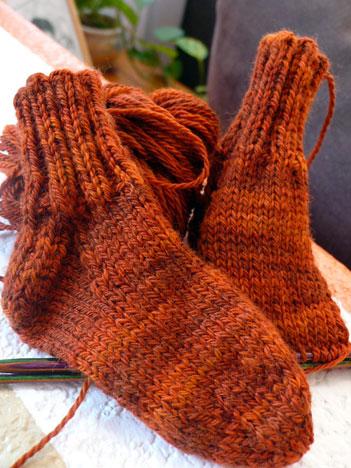 by the time we headed for bed last night, the second sock was almost done; the toe had to wait til morning—she was a bit too bleary-eyed to finish it up and we all know it’s better to just walk away at that point . . .

right now, she’s downstairs starting another pair, hee-hee. i think we have a reclaimed knitter in the family, now.

while nan knitted yesterday, i sat nearby working away on the glitter socks and another important task 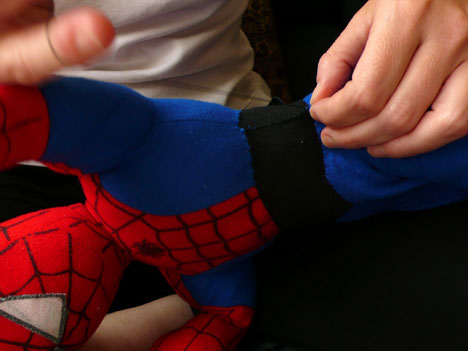 spiderman had sprung a leak in several different important areas of his body and needed some mending. this gave us a chance to take out my emergency sewing kit once again (another favorite of amad’s, along with the knit kit) 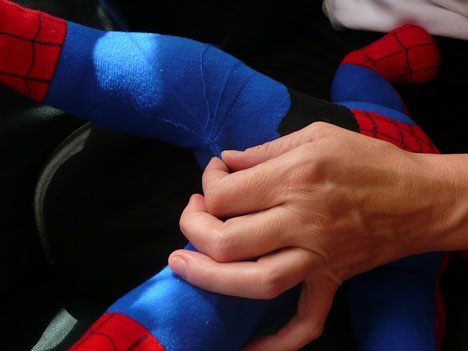 he has a good eye for photos, i think—once he remembers to hold the camera really still, he’s able to capture some very fine shots of his favorite things 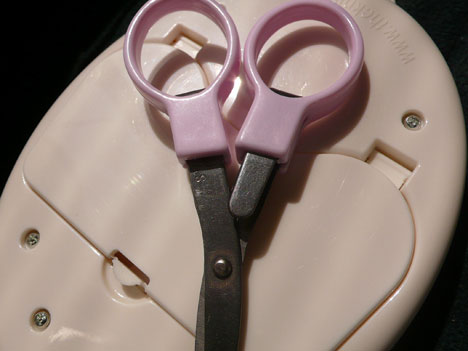 oh that reminds him . . . the scissors are here and the yarn is nearby (attached to my sock). 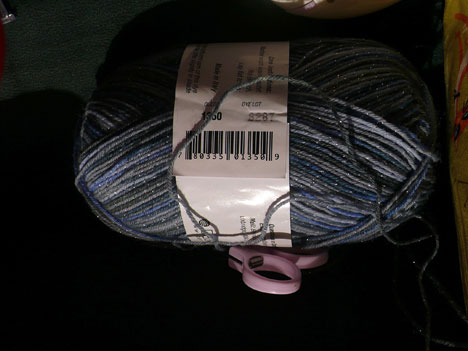 maybe it just needs a little cutting? they move awfully fast when they get a bad idea, don’t they? oh well, not much lost—the yarn was quickly reattached and progress moved forward. soon we had a second new pair of socks off the needles 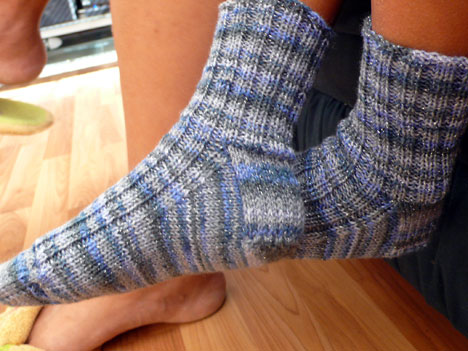 with this pair, we went with a classic 2 x 2 rib as a counterpoint to the glitter—i knit these a little bigger and a little longer than the first pair in the hopes that he won’t outgrow them by next week, heh. 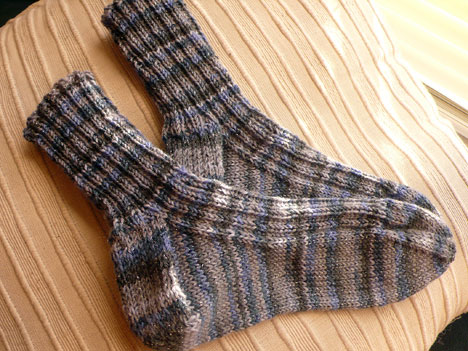 the yarn is a lot scratchier than the handspun, but not terrible enough to pass up the allure of tinsel. the yarn creates a sort of “galaxy” effect—it’s not bad-looking at all. 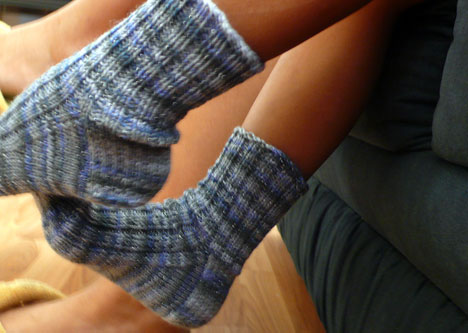 for the next pair to go on the needles, amad picked a skein of blue (what other color is there?) cascade heritage sock, which i had not knit with before (though i have often admired it in the yarn shop and in classes). 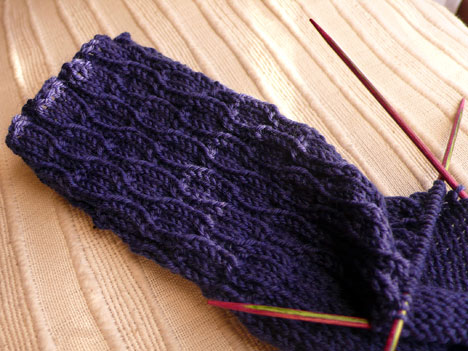 wow, i really like this yarn; it’s a pleasure to knit with—it feels good in my hands and makes a nice, soft fabric that feels sturdy at the same time. the 4-ply yarn will resist pilling and wear well, due to the nylon content. and it’s a very reasonable deal at about $12-$13 per skein with enough yardage for a couple of pairs of kid’s socks or one adult pair. 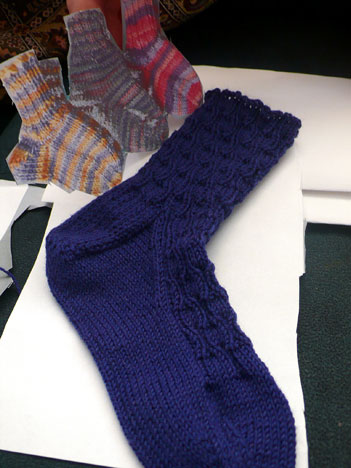 plus, it comes in an extensive array of solid and handpaint colors (amad chose the marine colorway for his socks).

i decided on the tesserae pattern for this pair—he liked the texture and the stitch count works well for a smaller sock. now we have one sock done and one to go before i leave on wednesday morning.

of course, i’ve gotten practically no other knitting done since we got on the sock kick here, but that’s ok—i think i can finish my sleeve on the way home, heh. and some things are just too important to let work get in the way . . . 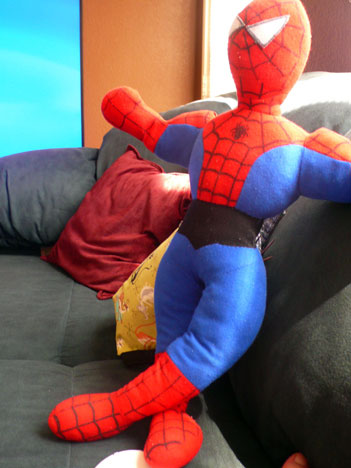