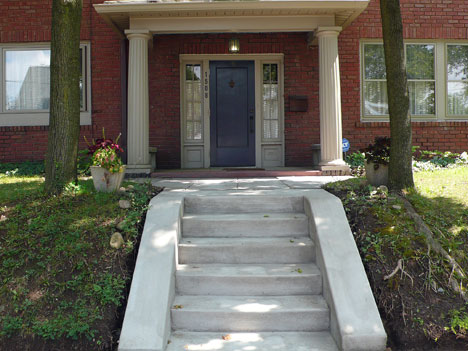 well, here we are, back in ohio.
i forgot all about the new steps until beckie pulled up in front of them last night (thank you again beckie for picking us up from the airport!), but ooohh, what a great sight to come home to.

i ran up and down a couple of times after admiring them from the sidewalk, then marveled at the evenness of the landing and the nice pattern they used in laying the concrete. so much better than what was here before . . . 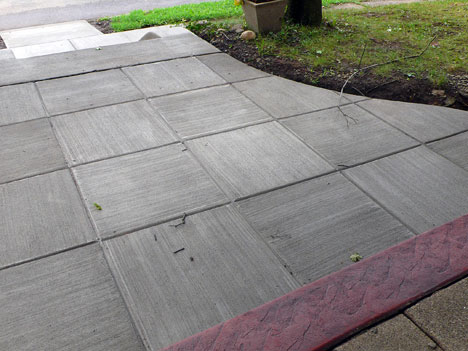 ok, so maybe i was a little punch-drunk after being in a plane all day, hehe.
it feels like months since i’ve been here . . . not in a bad way, but still, it was sooo-o-o-o good to sleep in my own bed last night.

this morning came all too soon and when i opened my eyes, i knew the moment of truth had come—time to go out and face the mess of an untended garden. since it was too early for my repaired computer to arrive, i didn’t have any good excuses to avoid getting to work. 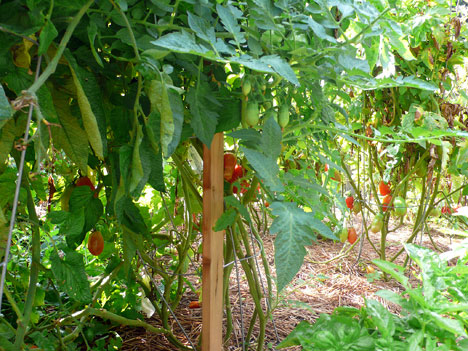 not that it was ignored by any means—beckie, anne c., and a few others were extremely generous in coming over to pick stuff while we were away and beckie even cooked up some big batches of tomatoes from what she picked (bless her). but anyone who has a vegetable patch knows that all sorts of pesty infestations and overgrowth can run rampant if a gardener turns her back for even a little while. 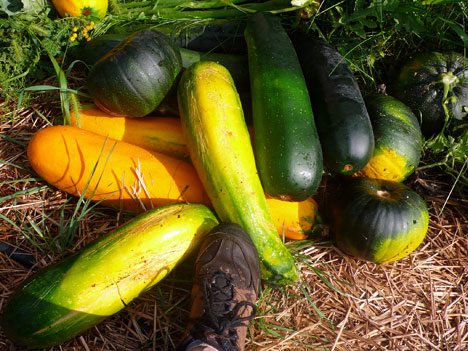 hahaha, i laughed out loud at the neat pile of 2-foot-long squash in the corner (foot added for scale) and then got to work adding a few more that were still attached to the vines.

other than a few sick tomato plants (normal for this time of year in our humid environment, i think), everything looked healthy and was loaded with produce.

david cooked and froze twelve quarts of tomatoes before he left home—way to go david—and beckie cooked up about twelve more that she refuses to keep and insists she doesn’t have room for.
i discovered that david also spread a big batch of tomatoes to ripen on the porch table, which were more than ready now. 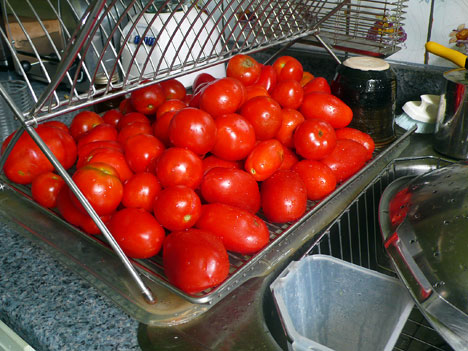 these i washed up to cook this afternoon; maybe it’s time to think about making paste since we have so many quarts of puree already. 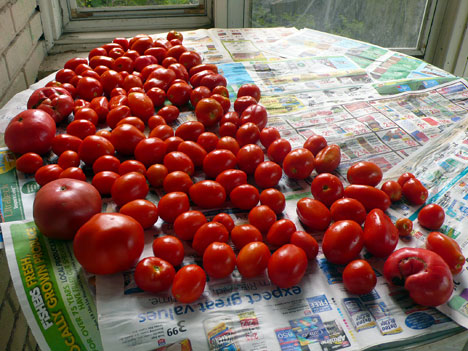 now the porch table was free to spread out today’s pickings—it’s all about the rotation system this time of year.
meanwhile, we have an abundance of cherry tomatoes too 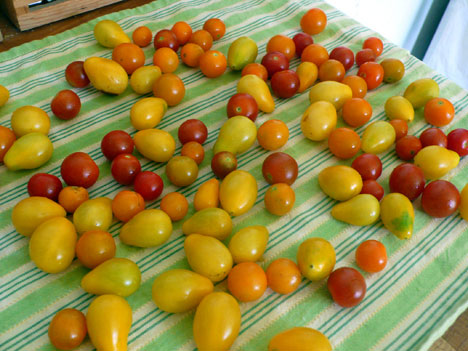 while i have the oven on to make paste, i’ll dry these as well (click here to see how it’s done). the dried tomatoes are much more compact to store and add an amazingly flavorful punch to stews, sauces, curries, and chili.

and while i’m doing that, i may as well roast up all that eggplant to freeze for winter, too
(my goodness—who’da thunk all that would come out of just six plants?). if i wait, the pile will just get bigger.

i have to admit, it’s a little overwhelming, heh. just writing about it makes me feel exhausted. maybe a nap first, eh?

and for sure, i won’t do anything with the greens til tomorrow or the next day. 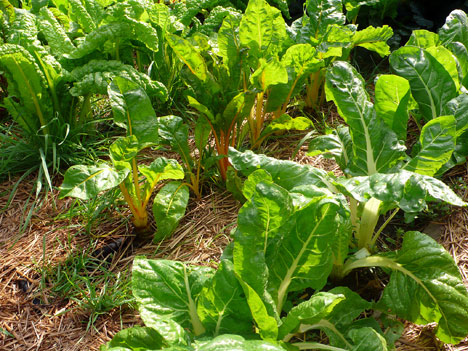 anyway, let’s talk about knitting—that’s really what we’re here for.
by the time we left vegas, believe it or not, i didn’t have much left in the way of projects to knit on the plane.

while i was oregon, i knit two mates for the nate socks i knit in july. then i knit three pair of boy socks in las vegas. and i started another sock that i’m keeping under wraps, at least for now (plus, i have to figure out the next part, so that project is stalled).

between the two places, i also finished both sleeves for my gray maze sweater. 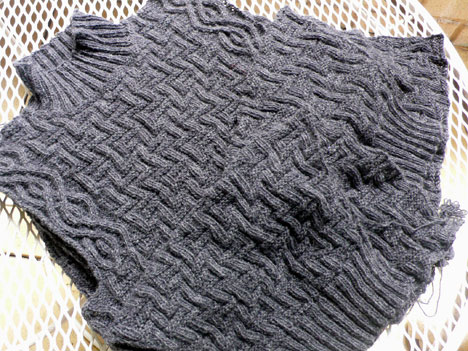 they just need to be sewn in and the garment washed to block it. i’ll finally have the new charcoal gray sweater i started—what—three or four years ago?? the cool thing is, it’s still exactly what i want for the in-between seasons. light fabric, neutral color; it will go with lots of things.

i have a little blue lace cardigan in the same yarn, that i wore a lot at sock summit, so i know it’s a good weight for chilly days that aren’t truly cold.

by our last day, what i had left in my unfinished knitting queue was a brand-new project that i didn’t start yet (before i left home, i so thought i’d have the time and inclination to start something new, HAHAHA!) and the nightingale stole.

the choice then, was clear—i was not going to start a brand-new project while traveling. period. (ok, maybe if it was a sock—but it’s not). 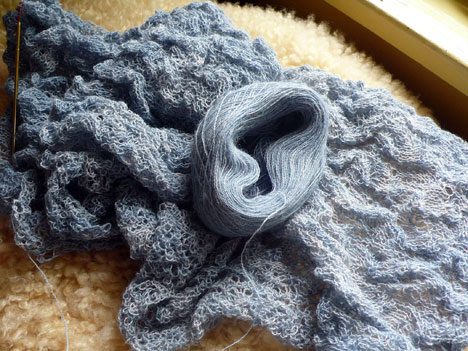 with a total of about nine hours of sitting time ahead, i took out my trusty nightingale stole and got to work. it’s truly an easy pattern for me at this point, though i still need to have the chart handy for the edging, since i work on it only in fits and starts.

anyway, i think i added about another foot to the length yesterday and feeling very sure i was getting close to being finished. so this morning while i was taking pictures, i measured it.

not even close.
dang. it just doesn’t grow, you know?
i am alternately afraid of two things: A) i will dutifully knit to the estimated length and it will double in size when i block it, thus making it far too long or B) i will work until i’m just a hair shy of slitting my throat, and stop, no matter how short it is of the estimated knitting length. i’ll be completely fine with that until i’m definitely NOT ok with it and wonder what’s wrong with me that i could not have stuck with the silly thing just a little longer so as to have a piece i love. 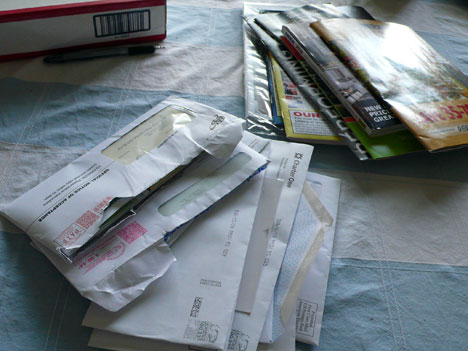 maybe i should take care of this mail.
and processing all those tomatoes is starting to look really good to me, too . . .