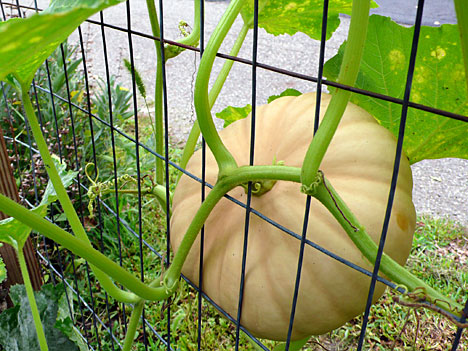 even before i left town, there was a whiff of fall in the air now and then at night; not just the scent of an overly-cool summer, but the true aroma of leaves melding with ground, woodsmoke, and a sharp edge to the breeze here and there. this thelma sanders winter squash is looking almost ready to pick. though the stem hasn’t dried yet, i may have to cut it down to prevent it from hurting itself as it hangs there, heh. this might make a yummy soup with the leeks and celeriac i have growing, which should be ready soon to dig up and use.
the large acorn squash i’d left it in the garden to harden was gone when i got back, so hopefully it was done and tasted good . . .

i heard it was warm and humid while i was away, but since i’ve been home, the weather makes me think of nothing but the arrival of fall—under an overcast, grayish sky, the garden is fading at the top level, while moulding in its bottom layers. it’s chilly in that way that promises to get chillier (if you know what i mean) and the days are very noticeably shorter now.

and this morning, a sure sign that autumn is almost here 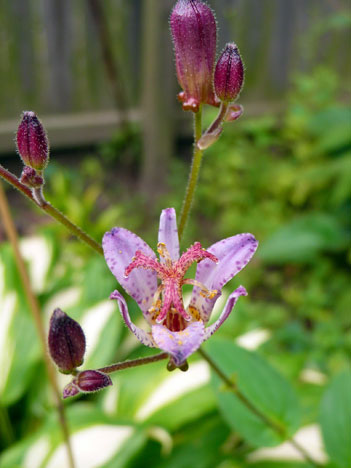 toad lilies blooming—the last of our summer flowers. not as plentiful this year; like all the lilies in the back bed, they are making a sparse showing, though they have spread over time and in other years have been quite plentiful. i’m not sure if they’ve been choked out by other things or if we need to amend the soil back there or if it’s just an off year for them. must investigate. 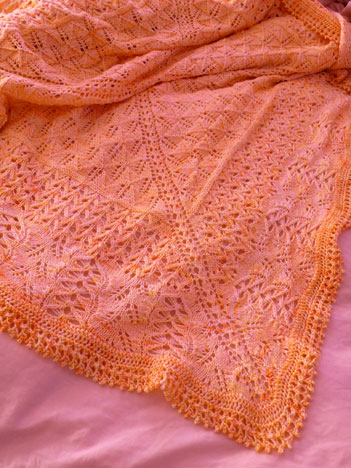 as you know, sunday is the day that my spinning class convenes and we had a happy, noisy reunion this morning after a two-week break (way too long!).

anne marie brought a skein of her finished coopworth yarn for our inspection and a couple of books with sweaters marked as possible project to knit with it. 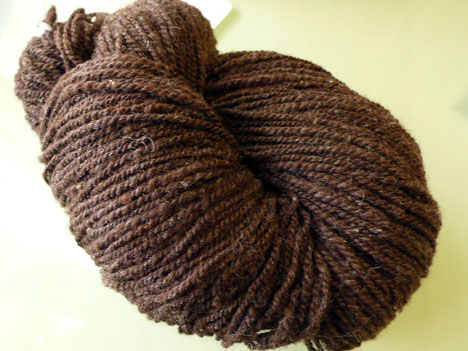 she ended up with about 1800 yards of this squishy worsted weight yarn, so she’s considering a cabled cardigan, slight oversized. one possibility is from the old knitting from the british isles book; she’s had that one earmarked for years (i confess i have those tags in a lot of my old books too). the other is from a fine fleece by lisa lloyd.
we’ll keep you updated on her final pick (watch, she’ll probably have it all knit up by next week). 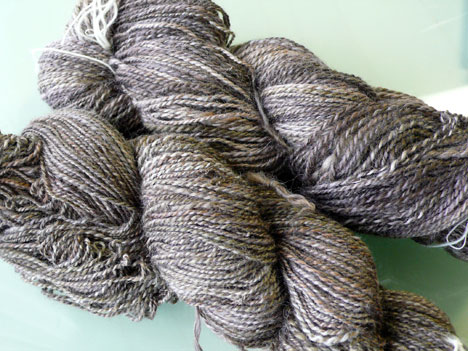 i was ready to start a new project, but hadn’t given it any forethought, so i was frantically digging through the fiber stash when anne marie arrived this morning, hahaha. i promptly dragged her upstairs to help me pick something from the stacked boxes in my workroom, which being stacked and largely unavailable visually, hold many forgotten secrets.

sure enough, we found a treasure that was perfect 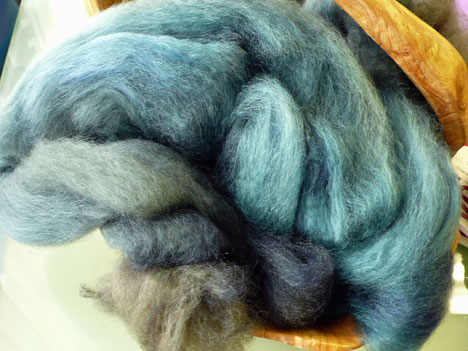 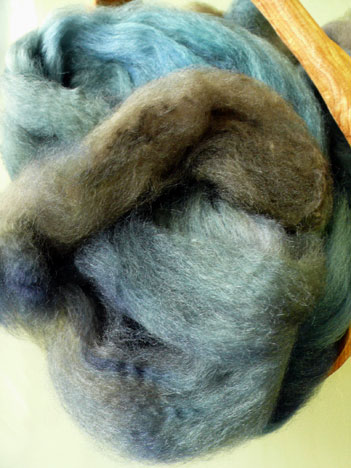 an extraordinary treat i purchased from carolina homespun at rhinebeck a few years ago and was “saving for something special”. well, what’s more special that being reunited with my spinning pals on an early-fall sunday morning??

just what i wanted.
i loosed the top just slightly before spinning and got started—i haven’t spun anything with silk in a very long while so i was looking forward to this 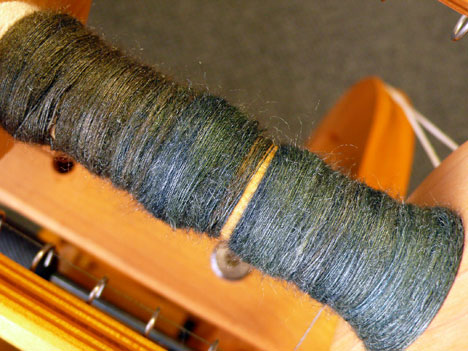 and i wasn’t at all disappointed—in fact, it’s even better than i dreamed it would be. i’m spinning as fine a 2-ply as i can because i’d like to knit a butternut scarf for myself. the original butternut made its way back to abby, who spun the yarn for it, and i miss having a sample for myself (but this yarn could become something completely different by the time i get finished with it).

i was in heaven most of the two hours as we spun and talked about everything that’s happened to us over the last three weeks (it seemed soo long a time!).

before i left, you might remember that i started sampling some finn fiber that anne marie and i purchased the the wooster show in may. and i fully intended to get into a big spinning project with that upon my return . . . 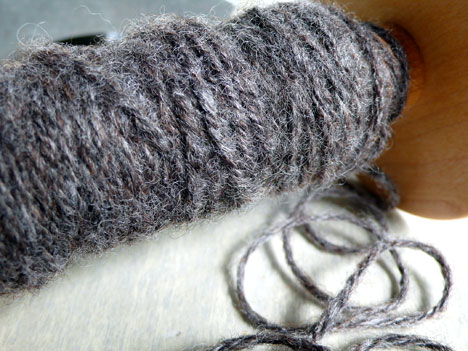 but i need to do some more sampling before i go forward. the 3-ply yarn i ended up with after my first attempt is soft and fluffy, but also an awful lot more fuzzy than i really want for a sweater—and not in a good way. finn is short and fine; there’s too much fiber sticking out of the yarn here, IMHO. i’d like something smoother, both for better stitch definition and less tendency to pill. i’ll keep working on the samples in-between spinning my cashmere/silk, with the hope that i’ll arrive at one i like in order to commence with that project.

over the last few days, my knitting time has been seriously impeded due to catching up on paperwork i could not do while on the road. yesterday by 8 pm i had all the bookkeeping squared away, bills paid, and ads made for the upcoming month (BIG chunk of work, there . . .). i even read and attended to all 768 emails that landed in inbox between leaving las vegas and now. 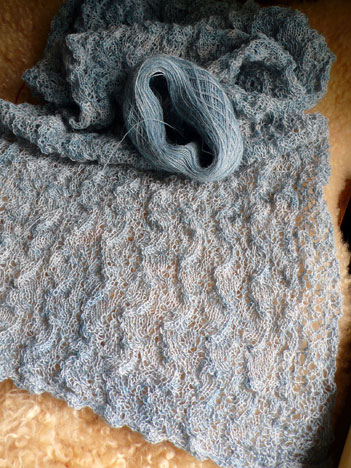 i still managed some late-night knitting and have added four more repeats to the nightingale stole, though no new projects have made their way onto the needles (and i actually have one or two all set to go, arggh—but i’m being responsible, heh).

my yarn cake is noticeably caving which makes me veddy, veddy happy—it means that no matter how slow it feels like i’m knitting, i am getting closer to finishing and blocking.

today, i think i’ll use my afternoon to cook a big skillet of curry (i can’t seem to get enough fresh veggies into my system, no matter what i do; just sayin’), then get one of those new projects on the needles (if for no other reason than to have something new to show you this week!). later tonight, i’ll work a little more on the nightingale while we watch TV (even there we are furiously playing catch-up).

and with that, i think i will retire to my quiet house to do just that.