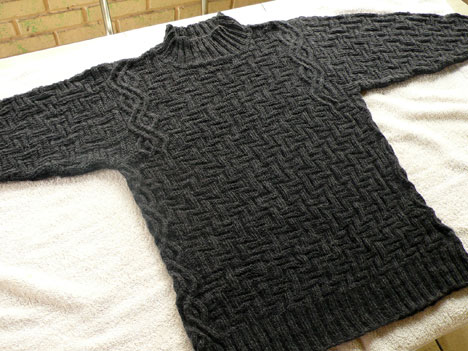 with just a little paperwork that HAD to be attended to this morning, by 10:30, i was able to tell myself enough—it was all caught up enough that the rest of the day could be spent knitting (there is all of next week to work, honey).

i finished up the seaming on the gray maze sweater and washed it to block—it’s drying on the porch now. 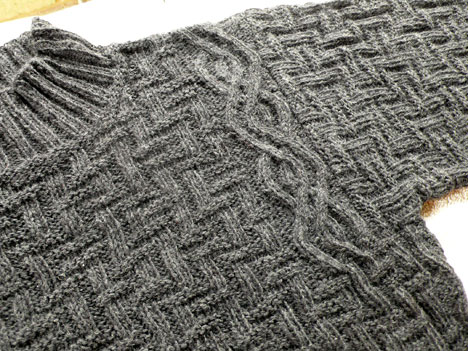 who says that stitch patterns don’t pop in dark yarn?? i just love this one—i’ve been wanting a charcoal gray sweater for years now and finally i’ve finished one. this will get tons of use—it’s light as a feather so it will work for several seasons of the year (i’m one of those people that wears sweaters from september to mid-june).

once i was done there, i sat down with the next piece that was nearing completion and by 2pm 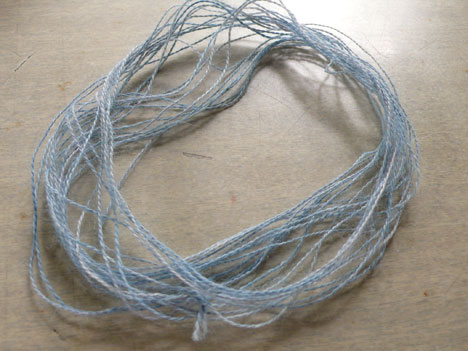 my blue yarn cake was down to its last strands. after tucking in a few ends and measuring it up, i put it on to soak for a while while i checked email, talked to my friend vanessa for a bit, and did few things around the house (not like cleaning or anything, heh).

BTW, i just discovered that all of a sudden, all the comments are going into moderation before being emailed to me. i’ll look into why, but if you don’t see your comment right away, i’m still trying to figure it out . . . and it will appear as soon as i remember to look for it (which i haven’t had to do before so it’s not on my schedule exactly).

anyway, after an hour or so, i rinsed the stole and got to work stretching and pinning it out. 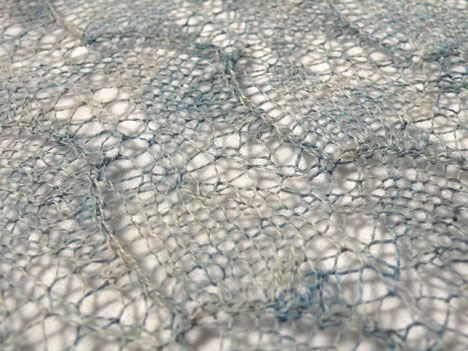 pretty! this is the superfine alpaca lace yarn called holding from a verb for keeping warm in colorway nightingale (not shown on the site, but very close to colorway dusk). 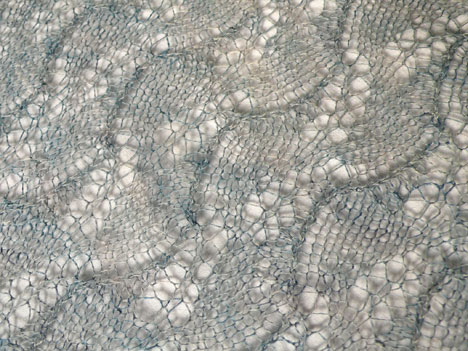 i know . . . you want to see that edging pinned out right?? i hear ya—i’ve been waiting months to see it myself; the thought of it has kept me knitting into the wee hours every night this week.

because it took me so long to knit (my fault and no one else’s; i’ve allowed myself too much distraction this summer), the pattern has actually been ready for some time—it’s all set to go except for some nice modeling shots, which we’ll take care of as soon as the stole is dry. 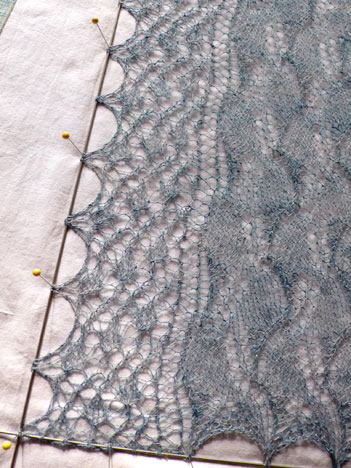 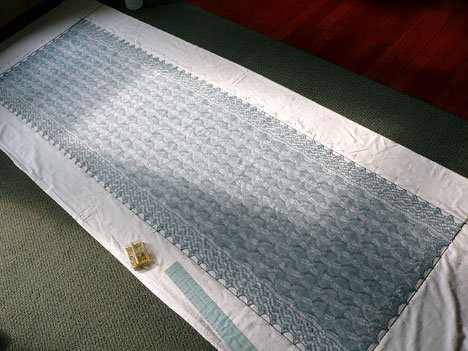 it blocked out to a more generous size than i anticipated—not a lot, but nice, since i ran out of yarn before i finished the number of repeats i predicted i’d need. all’s well that ends well though; turns out that the 1085 yards i had was just right for the size i was aiming for. now that’s the right way to end a friday.

ok, that’s enough now; can’t spend the rest of my mental health day on the computer . . . if i leave now, i’d still have at least 6 more to knit hours before i need to hit the sack. yay.