3 years ago, if asked about handspinning, i would say, “who the heck would want to spin their own yarn?” that is, if i could stop laughing long enough to say it. i had just moved from NYC, where the just the thought of finding space for a spinning wheel in my apartment would have quelled any such musings. i did NOT need another “hobby”; i felt i barely had enough time to knit as much as i wanted. plus, it seemed . . . so . . . mindless.
DON’T THROW THINGS YET!!
just hold the horses and read on.

so when, in my new home, right in the middle of a class in my new LYS, the carol m. and annette s. began badgering me to learn handspinning, they were slapped with a sneer and a sarcastic quip, and sent packing. i certainly did NOT want to take up spinning; they weren’t going to catch me donning a dirndle and bonnet, nooo sirree. uh-uh. NOT.

they weedled and cajoled throughout the 6-week design class i was teaching.
“how come you don’t spin?” they asked.
“cuz there are yarn mills where i come from?” i guessed.
“i just can’t believe YOU, of all people don’t want to spin.” they exclaimed.
“i need something else to do, like i need a hole in the head,” i snapped.
“you were born for this,” they emphasized.
“go jump in a lake,” i said.
“but you’re going to love it!” they whined.
“i doubt it; i’m very hard-hearted”, i said coldly.
“you don’t even know what you’re missing . . .” they waved as they drove off to some Fiberfest or guild thing.
“i’ll get over it”, i muttered.
“we’re gonna teach you whether you want to or not,” they threatened.
“just try it,” i dared.
“we’ll start next wednesday,” they said.
“oh, no we won’t,” i laughed.
“oh yes we will!” they laughed back.
“that’s what YOU think!” i laughed harder.
“that’s what we KNOW” they roared.
“uh-uh” i taunted.
“uh-huh” they sang primly.
you get the picture. totally infantile. resorting to peer pressure (snort); what did they think, that i had never been there? HUH. we bickered some more. and then i knitted with some handspun.

oh, but not about the dirndle and bonnet (i have a reputation to protect; i belong on what not to wear because i’m a slob, not because i dress like one of the little women). but about the spinning: i did it. that is, i let them do it to me.

and i fell right in with the lot of them; i am SUCH an addict. i did it for the sake of knitting. with handspun. i love it (they said so!). i was born to do it (they told me!) and now, i can’t stop (“HAHAHAHA,” they are laughing, “gotcha!”). darn.
before long, i had gone from owning a simple ashford traveller wheel to buying this: 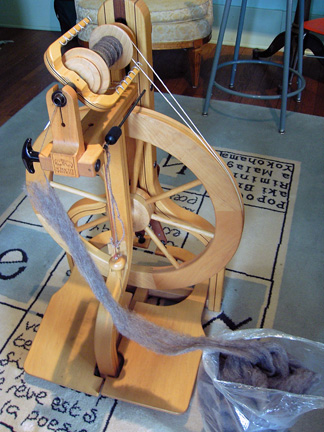 i love this wheel. there are no words to say how much i do.
it is in my top-five-best-things-i-ever-bought book. every time i use it, i thank the lady i bought it from.

as it happens, and completely unbeknownst to me when planning our move, we have landed in a region rich with fiber producers of all kinds. our state is the largest producer of alpaca. there are numerous wool and miscellaneous fiber producers as well, and several wool mills in-state. it is a fiberholic’s heaven here. uh-oh.
this is SO not fair; fiber here is a) plentiful, b) cheap, c) and more often than not, very, VERY nice. oh groan. check it out: 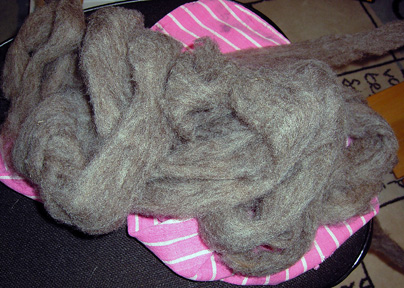 mmmm, soft. this is baby spice; more about this one later.

have i mentioned my yarn stash recently? ok, it’s pretty big. i know i said i would talk about stash soon, and then proceeded NOT to talk about it. i am trying to work out what i will say to make myself seem less shamefully greedy.

and it’s just dawning on me that spinning has contributed to the problem. as in, maybe doubling the stash in a few short years.
i don’t do anything halfway, trust me.
when i spin, i make hundreds of yards of yarn in a sitting. that’s a lotta yarn. and it’s all in my stash, waiting to be knit (yeah, right, as soon as i finish spinning my fiber stash). yes, we’ll talk about that another day.

right now i am working on the last of this: 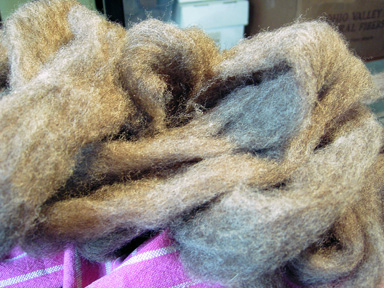 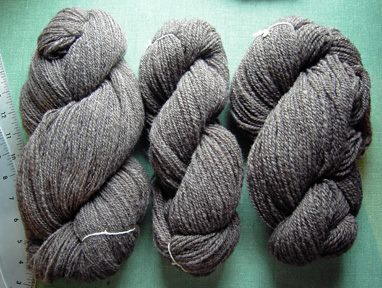 oh stop! i don’t feel that bad! and i’m sure steve is like, “you GO girl!” plus, i am not just hoarding it; i am putting it to good use: 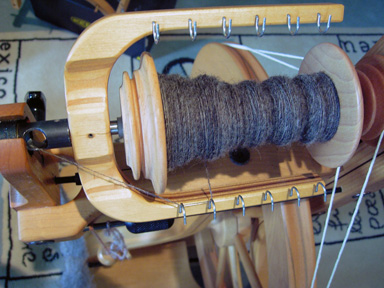 i’m almost done with baby spice. i think i will end up with enough for a shawl; at least i hope so. of course, i need another one of those, well, like i need a hole in the head. hurray for holes in the head!

6 thoughts on “wheel of fortune”