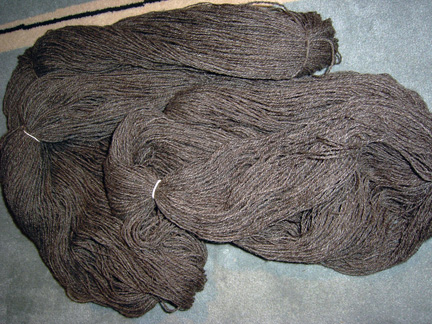 while i was at it this week, i also spun some sock yarn to get ready for the ManSock marathon.
it’s a blend from a local producer, of fiber from her motley herd of icelandic cross sheep, a lama, and some mohair goats (yeah, it’s tough stuff!). she makes all different blends (or not) from this assortment of fiber and sometimes dyes all or part of it. then she brings it to our guild meetings and we all buy some even though none of us need ANY more fiber. here we have a brown blend with some bright green and white streaks (i call it the Andes Mints colorway). it’s definitely not the softest stuff at all, but it is tough and makes strong socks. 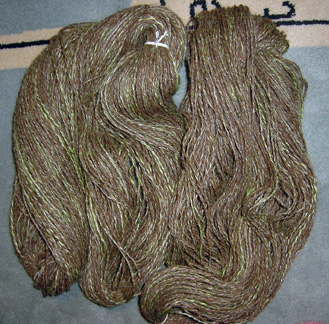 after my last post i got a couple of notes fom knitters who would consider learning to spin if it they had any time left from their knitting, which most of us do not. it got me thinking about time, because everyone always asks me how i find the time to do all this stuff. i realized this: spinning has actually made me knit MORE than i did before, even though i have less time away from my job!

for instance, i used to HATE and LOATHE sock knitting; i was definitely more a sweater knitter and did not often indulge in knitting ANY small projects. but, my husband adores handknit socks. trust me, i did not miraculously become a happy sock knitter because he fell in love with the fit of handknit socks. in fact, i resented it.

when it happened, i drearily thought, “oh, yay, just my luck.” for me, sock knitting was a tedious, endless chore. i knit socks ONLY because my beloved brother had a sworn allegiance to them. i had dutifully knit him several pair for christmas each year, with long bouts of non-sock knitting in between. and now this; a boyfriend who had to have it, too.

soon i was staying up night before anniversaries trying to get the darn things done in time. the reason i suffered along with cold feet and never took to them? i would rather have slit my throat than spend my precious time making myself socks. the problem: i really didn’t like most of the commercial sock yarns i found. they were limp, lame, and they wore out quickly (this was WAY before self-striping and koigu yarns were available).

then i started spinning. right away, it became obvious that i naturally tended to spin fine. even now, it takes more concentration for me to spin thicker yarn. anyway, i would spin up a bunch of something and want to knit with it right away, but not start a sweater or anything. by this time, david was wearing handknit socks almost exclusively and urging me to do the same, to cure my problem with coldness.

so, i tried some handspun for a pair, and in about an hour, my whole outlook on socks had changed; handspun had transformed sock knitting from bore to brilliant! i tried another and another. now our sock drawers hold lots of these:

(obviously, i am not one of those people who HAVE to have socks that match exactly . . . funny that it isn’t one of my many compulsions; i just SO don’t care if the two socks are the same. but, they do have to belong to each other. hey, that sums up how i feel about marriage and friendship too . . .)

i saw that socks could the perfect way to try new fiber and yarn; a few ounces of fiber is all it takes to make yarn for a pair, and we needed lots of socks, but were not fussy. i quickly realized that i could try more different fibers if i stuck with buying sock quantities; i could spin it, wash it and knit with it. then i’d take notes and decide if it was worthy of sweater knitting. this would also be a good way to use hand dyed experiments, very small leftovers, etc. 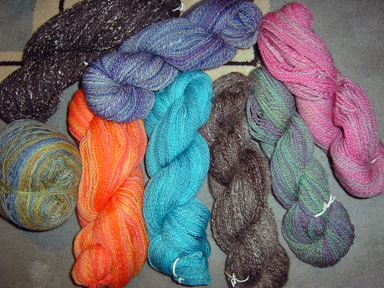 well, that was the theory anyway. so why do i now have BOXES of fiber hanging around? how did that happen?

now, i realize that i could just have easily picked hats to talk about; my small-project knitting has expanded in every direction due to having ready access to handspun.

bags, mittens, hats, scarves and all sorts of other items i hadn’t knit in years, suddenly became much more interesting as forms on which to play with hand-dyed colors and handspun textures. and i began producing that stuff in quantity. now, whoever would NOT want to do that!