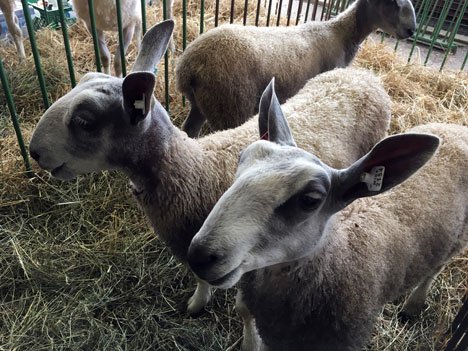 well, i have lots of photos from the fiber festival that i think you’ll enjoy, so i’m going to hold off one more day on delving into the scarf project in favor of adorable animals and the like. 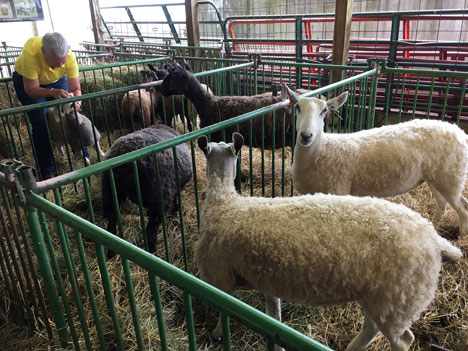 saturday dawned dreary and ugly but i was excited to get to the fairgrounds and open up for the day! i love the sheep and wools shows because there is so much to see and do and so many different kinds of knitters and spinners about. 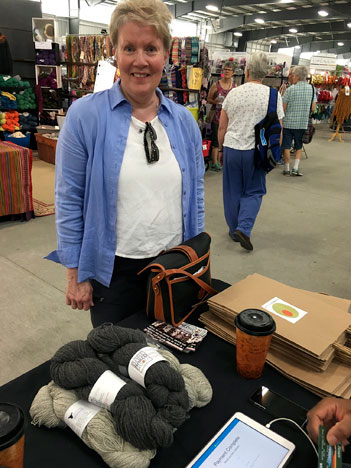 sally was the first visitor of the day to our booth, which was smart because she wanted a sweater quantity of kent DK in mussel shell. sally just finished knitting herself an illas ciés pullover in ginny sport, but it was too warm to wear it that day. 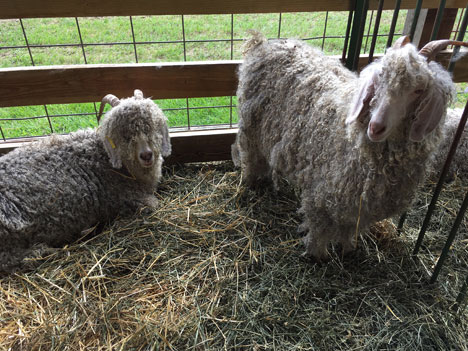 our friend cherie arrived right at 9 am to help us out for the day and once we were settled and in a groove, i took the opportunity to run over to the mohair show to see if i could find some fleeces for making our chebris and cabécou yarns.

just a couple of days earlier, carrie from our mill let me know that she was using the last of our silver fleeces that she had on hand (thank you everyone for your poivre, sel gris, carbon, and dragée love!). i told her i could look and see if anything was available while i was at the show. 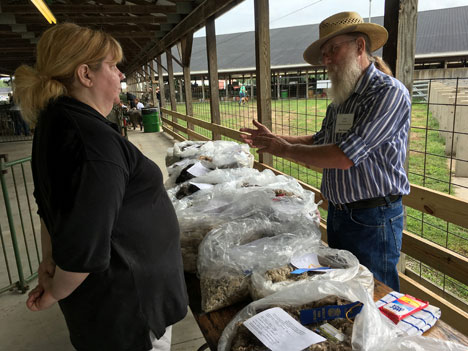 i was fortunate to arrive just as the mohair fleece judging was getting underway; what a great opportunity. there i was with all the goat farmers in their rugged jeans and boots, wearing my little cream salt & pepper top and matching amalfi coast skirt, hee-hee—the picture of summer and just begging to be splattered by an ornery, four-footed passerby. but i didn’t, for once, end up a mess.

instead i learned an incredible amount about what makes a great fleece; the judge is particularly interested in colored fleeces, so we all got a real education on that alone. i was not very confident about being the purchaser that day—i know something about nice wool, but i am not an expert like our mill owners are and i was buying for them in this case; yikes!

my strategy usually consists of sticking to ribbon winners if i can—i figure you can’t go wrong with a winner, right? 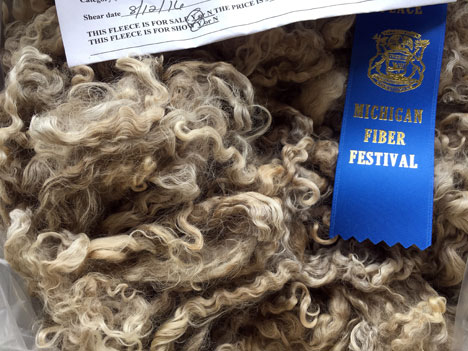 but after hearing the judge speak for an hour about fleece characteristics in minute detail, i was armed with knowledge. also, the director of the goat show took me under her wing and introduced me to the fine producer who snagged that there blue ribbon as well as several others. 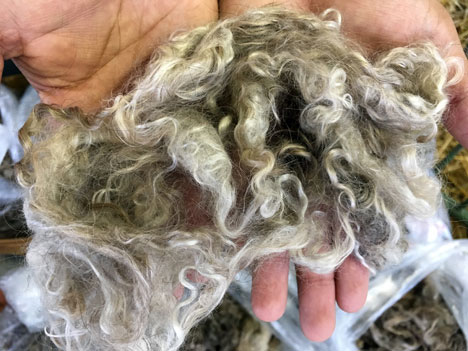 turns out they are overloaded with fleeces that they can’t seem to move; not only that, they know our other producer john and have purchased goats from him in the past—which means that at least some of their genetics are the same as what we already spin with (by now i was pinching myself to make sure i wasn’t dreaming and texting furiously back and forth with carrie).

you have to understand—we have at times spent days and weeks on the phone and internet searching for a supplier of colored fiber to tide us over til the next shearing. and here were eric and gabe with a whole herd of brown and silver goats. and they live just over the state line from us in western PA. what a coup! 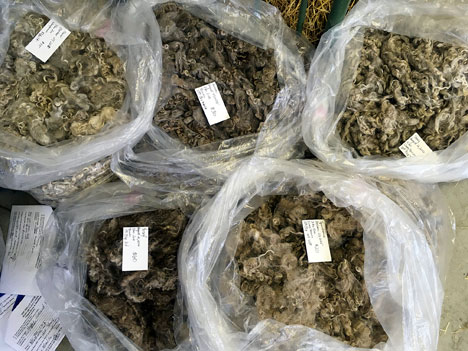 i think i saw gabe do an actual double take when i asked how much per pound if i bought all the colored fleeces he had in his stall, haha.

as it turned out, i decided to leave some of the fleeces with him until carrie and robbie could assess the five or six that i purchased—i prefer to let them decide what they like and to deal with the farm directly. that said, it looks like we are about to expand the range of warm brown tones in our mohair lines. YAY! 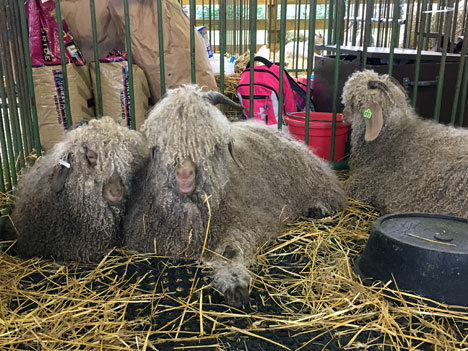 friends, meet your (mohair) makers. yes, these are the very goats; just look at those locks . . . 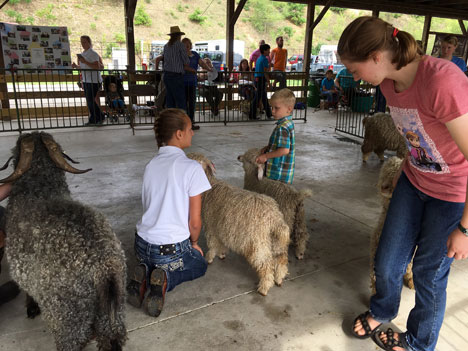 on the way out, i saw a family who had fleeces in the judging i just attended—aren’t they adorable. i am especially smitten with the little, little boy and his little, little goat—he can’t be more than five years old and i bet he’s even younger—they should win a prize just because they’re SO darn cute! 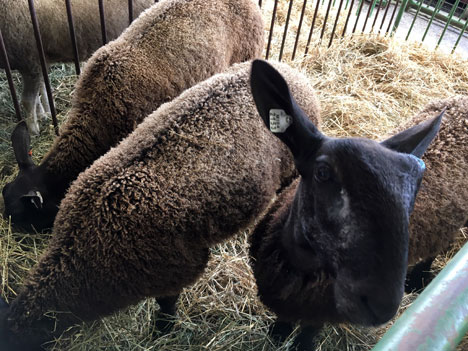 can’t help it; i love the sheep too!

back in the booth, cherie and david were rocking it, chatting up knitters and being helpful in every way. the early afternoon was incredibly busy and were just hitting our stride when the fire marshall announced that tornadoes were touching down within a radius too close for comfort. everyone was asked to leave the building and head for the basement under the grandstands—yikes!

we were allowed to stay in our building but we all had to go into the bathrooms for safety. yes, ALL of us in the bathrooms. first it was for 15 minutes and then that stretched into 45 somehow. after that we were allowed to wander out into the main space again, but the giant overhead door of the building was kept closed to keep out the lashing torrents of rain. hoo boy.

that pretty much killed our afternoon; we sat and knitted and waited for the storm to pass and after about three hours, it did. by then though, most of the fairgoers had gone home . . . and soon it was time for us to do the same. 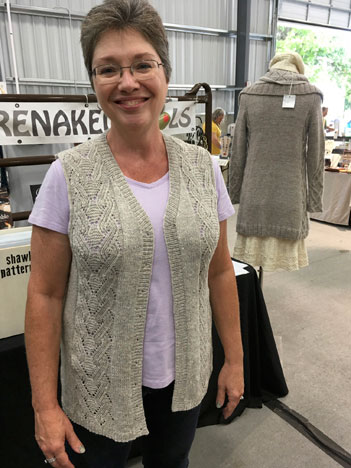 sunday was really relaxed—foot traffic was a bit slower (i think a lot of people still dont’ know that this building is filled with booths to shop in). that said, it gave us a chance to walk around the show, visit with friends, and do a little shopping of our own. 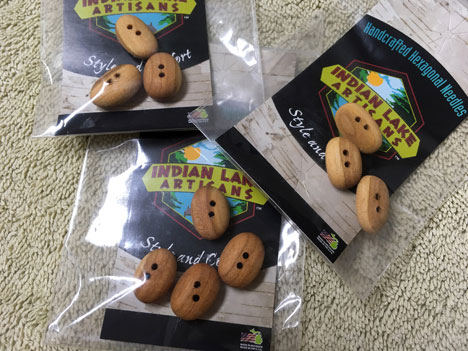 and i actually made some purchases, like these handmade cherry buttons from our friend mark at indian lake artisans; he makes them from scraps cut from his yarn bowls. these are only available in their show booth, so it’s a treat to be able to buy some and there were just enough of these for a sweater. 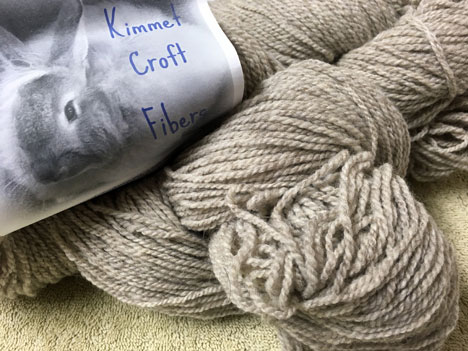 across the way at kimmet croft fibers, i succumbed to a couple of skeins of unbelievably soft angora/merino blend in a pretty natural shade. janice also dyes some of her yarns and offers beautiful kits for the patterns published in “poems of color”. she’s a really sweet person and we enjoyed being neighbors all weekend. 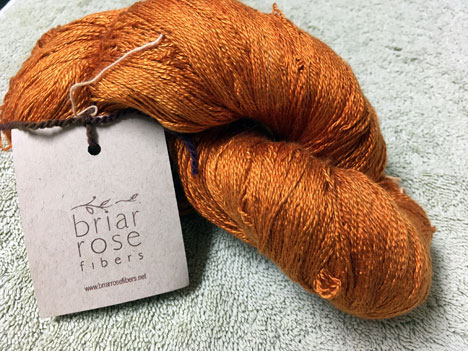 in my travels through the barns that afternoon i again fell victim to yarn—yes again! my friend chris at briar rose fibers had some lovely silk yarn which i just had to buy; isn’t it a wonderful color? it’ll make a beautiful gift or a shawlette for me. and i wanted to lick up something for my mom to knit with, as she SO enjoyed a recent project that she knit with briar rose abundance (i’ll show you that in a sec). 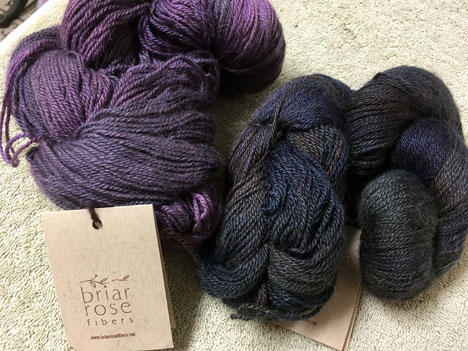 several years ago when my mom had a knee replacement surgery, chris sent her a large bundle of abundance to knit an hourglass throw during her recovery. unfortunately, the surgery and anesthesia really knocked her for a loop in terms of concentration and it was quite a while before she felt like knitting again. 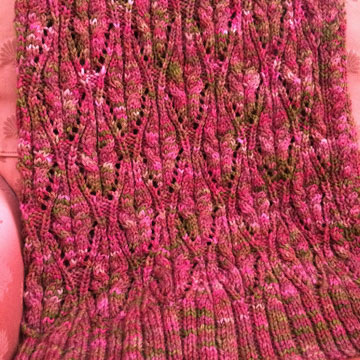 she also had a couple of WIPs to work on for grandchildren, so she put off starting to complete those projects. it was just this past spring that she finally cast on, but once she did, she knit that blanket really quickly. isn’t it pretty? when we go to visit her in a couple of weeks i’ll help her block it. she was concerned because it seems small, but a nice bath will fix that. 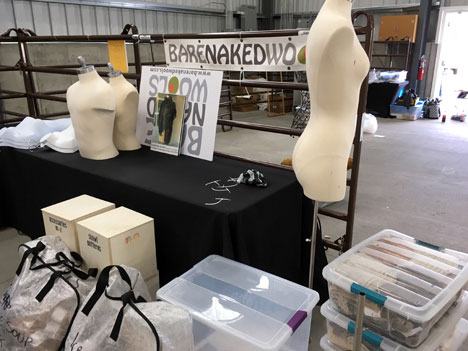 oh, i sidetracked myself there for a minute, sorry! all good things must come to an end and before we knew it we were breaking down the booth and packing up to head home. it’s a little like taking down the christmas tree after a wonderful holiday season, but it has to be done. 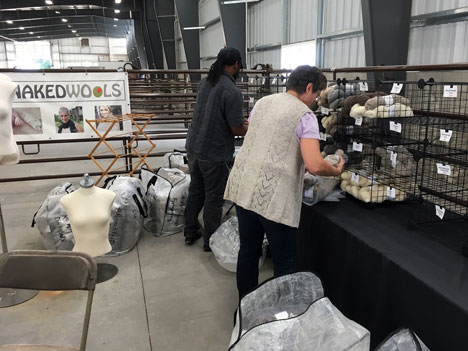 my tonic is to save a treat for the very end—the purchase of kettle corn to take home; i’m a secret addict. which is why you don’t see a photo . . . and can i just say? the michigan fiber festival has the best kettle corn i’ve tasted so far. not that i can be considered an expert by any means; i haven’t tried that many. but of the ones i’ve tried, this one is the best.

the trip home was good—no rain, no traffic, and just my honey by my side. late as it was when we got in, we unpacked the truck so as not to have to do it in the morning. it’s better that way. 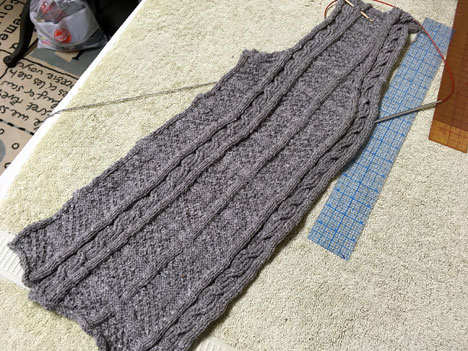 because i drove the first half, i didn’t get to knit in the truck, so i was determined to knit for a while before head to bed. i finished up the armhole section of my sweater front to the shoulder 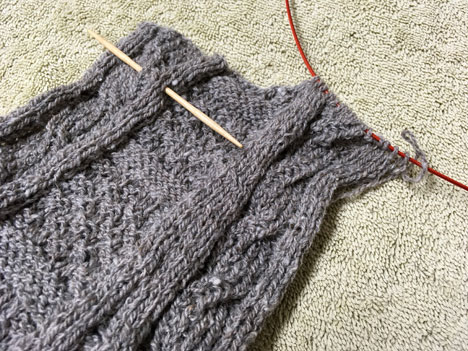 stopping just short of the shaped neckband. i had hoped to finish that up last night but ended up tackling a much bigger chore and didn’t get to knit at all. 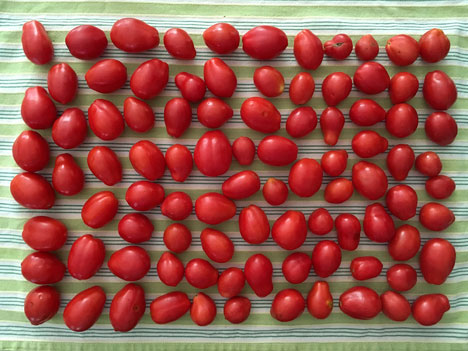 yes, monday morning came like a runaway train and i bet you can imagine what awaited me in the garden after a few days away.

we had a lot of everything, even a good bowlful of green beans. seriously, this wasn’t even from looking very deep—although i did make sure to clear out as many tomatoes as i could find because i don’t like the smell when they rot.

it took me over an hour just to wash and prep them all for cooking; this is a (not very good) panoramic photo of my kitchen when the last one was rinsed—as you can see, not much countertop space to spare! 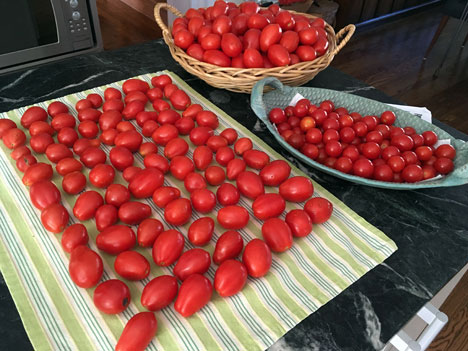 i set aside the romas and cherry tomatoes to develop a little more ripeness; these i will roast in a day or two.

last night i focused on cooking the ones that were cracked or developing soft spot; i cooked some on top of the stove and roasted some in the oven. 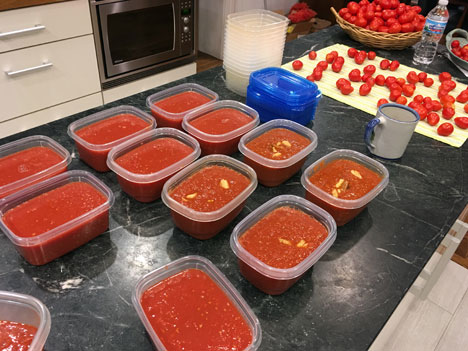 by the end of the night i had another dozen cartons of puree for the freezer, plus a batch of juice (i’ve been freezing tomato juice; it’s SO good!).

i’ve still got a large number of more solid tomatoes that need to be cooked as well as the romas and cherries, but everything is under control for the moment. i would have liked to get to some of them today but i am also behind with my desk work so i buckled down to that all day instead.

thank goodness there is knitting to look forward to—and that’s where i’m heading now. i’m in need of a comfy seat and some relaxation with my favorite sport.