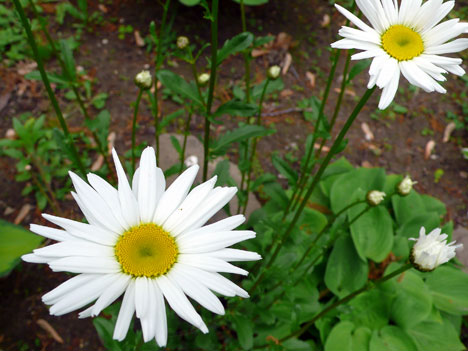 after some beautiful festival weather, we are back to overcast chilly days. but this happy-faced daisy plant decided to grace us with something to smile about. neither of us remembers planting it so it must be a gift “dropped off” by a bird or squirrel. at any rate, it landed in a good spot in our back yard hosta bed so we will keep it, thank you very much.

but overcast and chilly isn’t all bad . . . it’s good weather for working outdoors and i got all the vegetable plants we have in the ground. 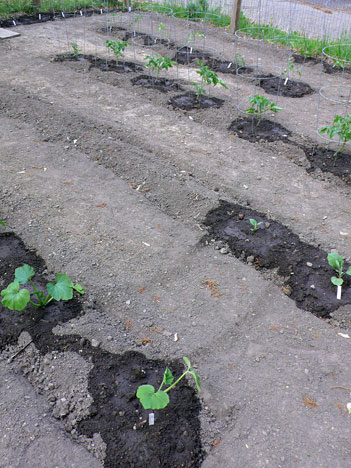 the bare spots await some plants that have not arrived yet (fingers rapping the desktop) from the organic grower in california (supposedly, they’ve had a lot of overcast weather too, and are shipping late). i hope they come soon; most of those are eggplant starts and they need time to grow.

but it’s good . . . the new garden setup is working out pretty well (i still wish i had more room for greens—i may have to see if i can wheedle david to dig up another patch somewhere). there is plenty of room for all the tomatoes, peppers, eggplant, herbs, and squash i wanted. i would love to have space to grow spinach and lettuces (omg, that sounded an awful lot like “i’d like to have space for just a few more balls of yarn . . .”). 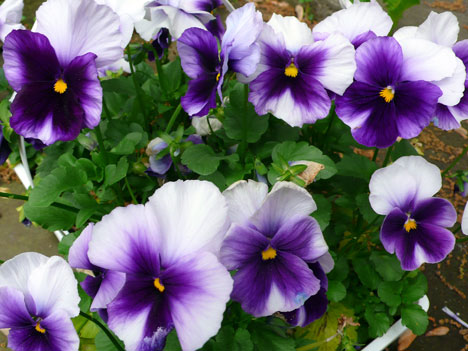 (linda, i’m embarrassed to say these are not in the ground yet, but i plan to put them around the base of my little bay tree when i bring it outside this week. they still look happy though, right??)

we were quite torn about taking out the raised beds . . they’ve worked fairly-well for us for five years, producing nice growth, but our planting space was severely limited, we felt. we couldn’t put enough room between plants and wondered if the roots were able to go down far enough (the natural clay and stone-filled soil beneath the beds was like solid rock). hopefully everything will grow well in the new arrangement (in-ground planting). 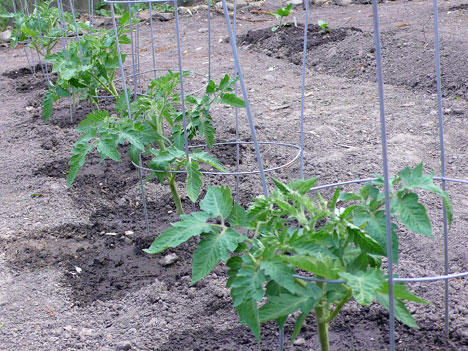 i hope they will like it this way. these tomatoes are so gorgeous, aren’t they? there are buds already on them . . . 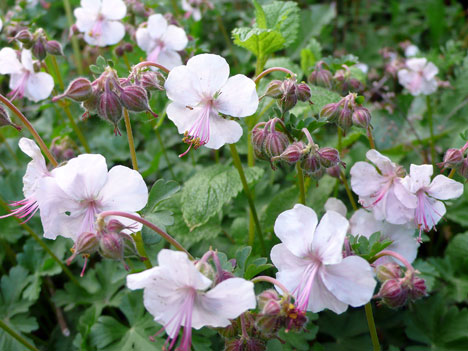 these are my favorite cranesbill (i have many . . they are cheap, cheerful, and they grow anywhere, every year—what’s not to like?). i love the buds on those whitish-pink ones. the geranium sanguinaria should be along soon—those are red—and my other favorite.

ok, what about the knitting, you ask?
that’s been happening too. i’m working on a big piece that has to remain secret for a while, but making progress on the many socks i also started (even though i said i was happy working on one at a time, and would not get myself into a sock glut again. sigh.)

i’m working away on the second shifty sock and manon has completed a test knit which is looking very handsome on her hubby. the pattern is all set to go—i just need david to take a few photos. i’m aiming to release this one tonight. 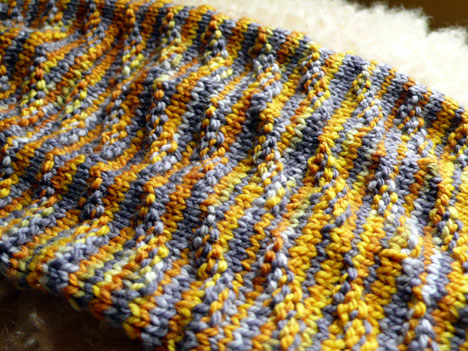 it’s positively an invasion of them. i wanted to start the second matching one, but decided instead you’d rather see the sock knitted in the alternate colorway, wooly bear 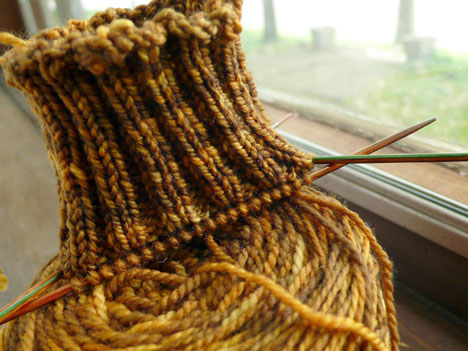 (ooops, if you look out the window you can see my still-empty planters on the front stoop)
anyway, i’m doing this one in my size; it’s a more tonal mix of warm, rich, blendy colors, just like a real wooly bear would be. i know. you can’t see anything yet. but i have class today so i promise you will see some creepies tomorrow.

adam has the kits for this sock up for pre-ordering, and actually the pattern is done, too. as soon as this newest version is knit and we get some photos. we’ll be all set.

(i’m sensing a theme here of being behind on knitting and photos, hmmm. the thing is, i’m NOT. you should see how much knitting and patterning i’ve been doing. oh yeah, you can’t see that . . hehe.)

and then there are the diamanti—i tell you, it’s a new revelation every day with this pattern.
first i am lovin’, lovin’ the bamboo blend yarn—what was i thinking ignoring it so long (and i know david will like it too).
then, there is the experiment with the stitch motif—here’s my latest progress 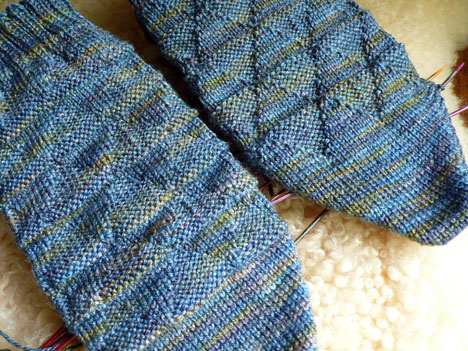 i have both socks now past the heel. i knit them in the same pattern on the same needles with the same yarn. the only difference is that i flipped the stitch motif on the sock #2 (above, right), sensing that i might like it better (which i do). it looks much crisper and has more knit/purl contrast.

here’s what’s weird: i fully expected that if i looked at the socks from the reverse direction, the opposite would be true—that i would appreciate sock #1 more. after all, in the other direction, the knit/purl motif of sock of #1 will be the same as sock #2 (knits point UP, purls pointing down) 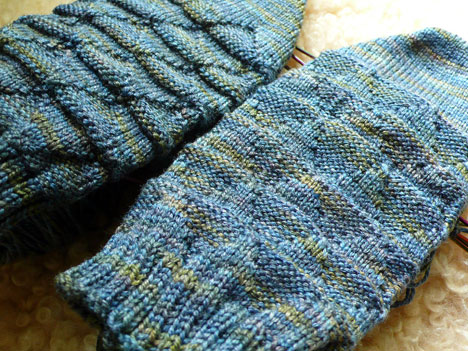 why then, when i flip them, does sock #2 still look lots crisper (and yes, better—i know it’s just a matter of taste, but bear with me) than sock #1??

i know that logically there is an answer to this . . . it is because of the way the knits and purls stack up . . . that is, they are not really identical when flipped. but—wow.
are you saying wow?? (i bet you are)
it’s a big visual difference, right?

and an interesting thing to ponder. let’s face it, david is NOT going to care which way the purls point, up or down. he likely won’t even notice that the two socks are different, and even if he did, he wouldn’t consider it worthy of actual comment.

but for us, it’s fascinating, right? we could probably get a several hours conversation out of this (oh yeah, i already am). i mean, considering that for top-down socks we are usually knitting motifs that will ultimately be viewed upside down, this is something to keep in mind.

ok, maybe it’s not such a big deal. good thing i have distractions 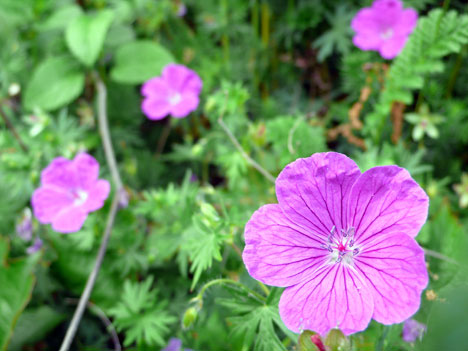 23 thoughts on “a cheerful volunteer”