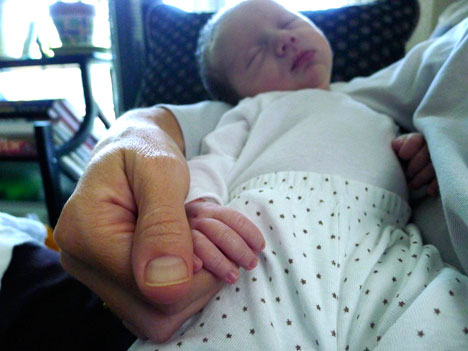 sorry i’ve been away for so many days—we went to detroit this weekend to meet baby knitspot and while i thought i’d have time to sneak in a blog post over the weekend .  . . well, anyone with kids in the house knows how that goes, haha. no matter how many people are on hand to help, everyone’s attention is caught up doing baby things and nothing else.

much as i would have liked to write a blog post though, it was nice to get away from our desks for a couple of days before my teaching travel dates begin later this week (more on that later!).

anne marie and i finished up the september book chapter for FIFC by early friday afternoon, with the idea that david and i would head out knowing things were in good shape for it’s release on monday—who needs stress when you’re going away for the weekend?

i spent the rest of the afternoon packing and baking a peach pie to bring along. we pulled it out of the oven, made a nest of towels in the back of the car to place it, and headed for the highway—i didn’t even stop for photos, sorry.

haha, and then it taunted us all the way to detroit, filling the car with warm peachy, spicy, brown sugary vapors. what was i thinking?? 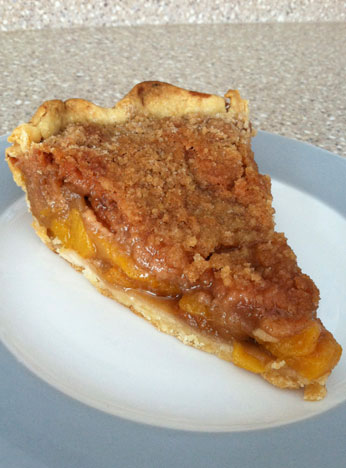 but it was worth it when we arrived and it was still warm; erica couldn’t have been happier to see it. she texted me a picture of this last lone slice, which i think was her breakfast yesterday. 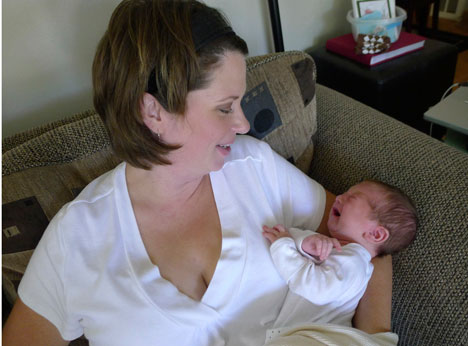 well, maybe one other thing makes her happier than peach pie. don’t they look healthy and beautiful? 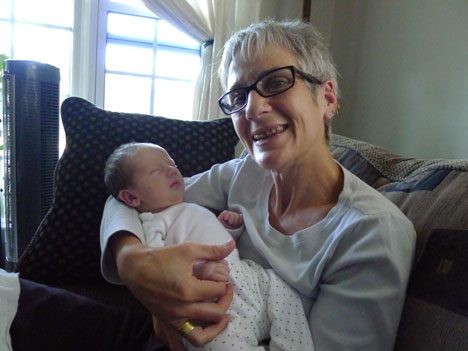 i got to hold the baby!!
and he didn’t scream his head off, haha. actually, babies like me pretty well; i think it’s the eyeglasses.

the rest of the weekend was sort of a blur really; we just spent our time there visiting quietly, having a couple of nice meals at home, and watching movies. i went for a long run on saturday and a long walk on sunday—the neighborhoods around there are some of my favorite to explore. 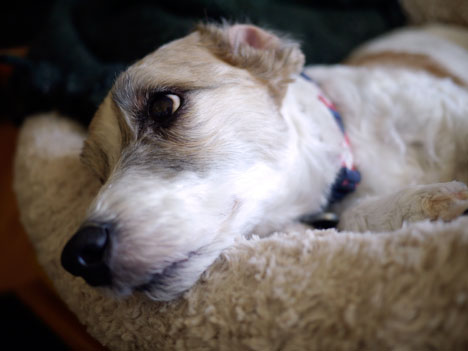 buddy is slowly adjusting to this complete overhaul of the life he once knew, but we can all tell he’s feeling a little neglected. i had promised to take him for a couple of long walks when i arrived and we did go out both days for as long as he could stand it (he gets bored much more easily than i do; is there something in that to be concerned about?). 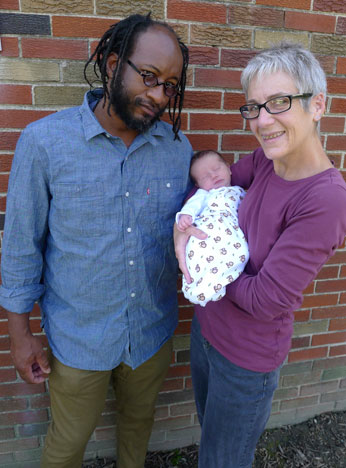 before we left for home we got in one last shot with uncle david. we had already taken the opportunity earlier to photograph padraig’s first modeling gig, the results of which will be revealed next week.

i would post it this week, but we have that slot filled—that’s right, the caïssa sweater release is slated for my travel day on thursday, YAY. i know many of you are anxious to get your hands on that pattern and i think you’re going to like what we’ve come up with for the release day.

i hardly got any knitting done over the weekend; not really sure why. i mean, we certainly sat around enough, but it seemed that there was always something happening, too. i started a hazeline shawlette, just for the fun of it in this september’s club yarn (SPOILER alert on that second link). i figure, hazeline makes for excellent travel knitting and maybe by the time i return from my east coast trip, i’ll have a nice finished shawlette to keep or give away.

so i worked on that a bit in the car and while we chatted. i also worked on a lot of stuff you can’t see yet, like swatches in yarns for the 2013 barenaked club (we are finalizing our yarn picks now) and sample knits for the current FIFC club.

in an effort to travel light, i did not bring my bloch ness sweater or my wasp and rose shawl, but as soon as i got home, i got back to work—i really missed them! 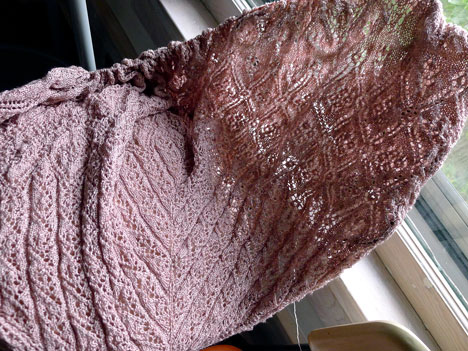 i worked on the shawl sunday evening while i chatted with my mom and got a few more rows done—just four or five left to go, woo-hoo. they are very long now, topping 500 sts and i gotta say, the knitting at this point tends to put me to sleep—my fault, not the shawl’s; i don’t get enough rest at night and the knitting is so soothing it lulls me into a twilight zone, haha.

i’m starting to get concerned that i won’t have this off the needles before i leave on thursday. 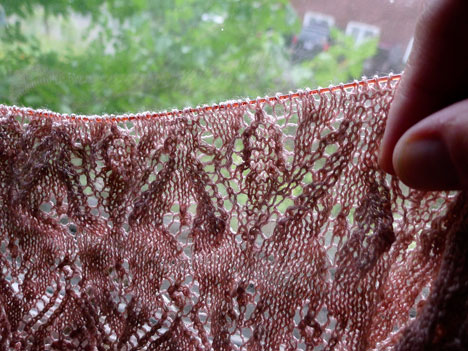 i am far enough along in the hem that the wasps can now be seen in full—a whole row of them along the edge, with their noses buried in rosebuds.

here’s another shot with them against a dark background 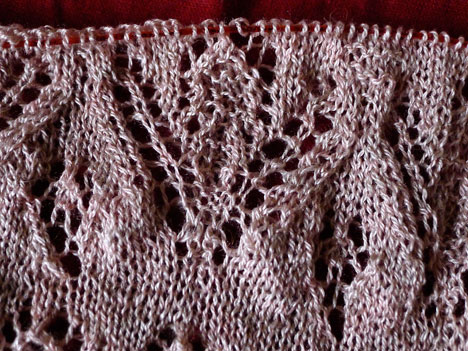 when they are stretched and blocked, they will elongate and look even more waspy, with a narrow and longer bee-hind.

all that’s left of that project is a garter-based scalloping pattern along the edge and i am well into that now. i’m going to try for a finish this evening; i have kniting class at 6:30, so there iwll be a couple of good hours of work time at least tonight.

and you know what? it might be nice to bring this shawl to maryland unblocked—i’m teaching the finishing series twice on this trip and it would be great example of a larger piece for the class to work on together.

that’s right; i’ll be teaching the finishing series at shalimar yarns this friday, september 21st and again on saturday, september 23rd at fibre space in alexandria, where i will also be teaching an advanced lace project class on sunday, featuring the twig and leaf shawl.

the next weekend i will be teaching in southern maryland at crazy 4 ewe, where we kick off the weekend of classes with a trunk show/lecture on friday night, followed by two days of classes in lace knitting, blocking, and yarn voyage.

i’ll stay with my nephew james and niece diana during the time between events; they are buying and moving into their first house, so i’m hoping i can be of some help next week as well as using the time to get some work of my own done. 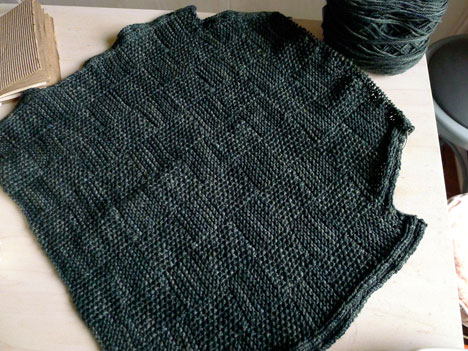 yesterday in class i worked on the back of the bloch ness sweater. once that shaping begins, it really moves along quickly as the rows get shorter and shorter. i should be able to finish this up tonight and maybe steam block it in the morning. then i will know if those seamlines will flatten out as i hope they will. if not—YIKES; i’ll have to rework the design. 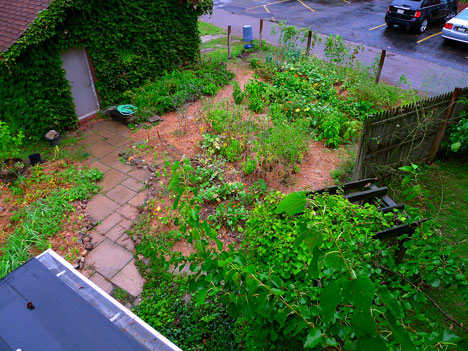 we’re having a nice, all-day soaking rain here—we really need it. the garden is dying back, but there is still plenty good that the rain will do. we are quite behind in our rainfall for the year and we need to catch up. 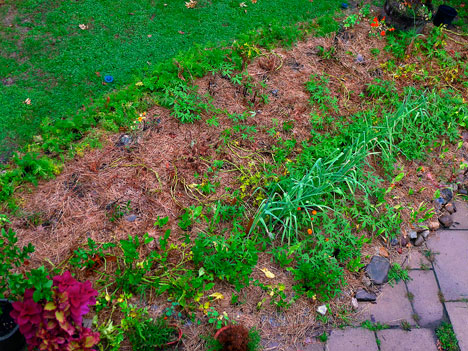 my potato vines have died back, leaving a swath of naked straw between he carrots (far left) and the sweet potato vines (which are starting to die back a little too). we’ve been digging up a few here and there to eat, but soon, we’ll have to get all of them out.

i wish i was going to be home more in the next few weeks; i’m anxious to cook with these fall treats. ah well, the nice thing about root vegetables is that they hold very well—even after the frosts begin. last year, we left everything in the ground all winter and dug them up as needed; it was a really space saver for us. of course, we never had a hard freeze either.

we’ll see what happens as we go; we don’t have to move on this yet. it can wait til my travels are done. 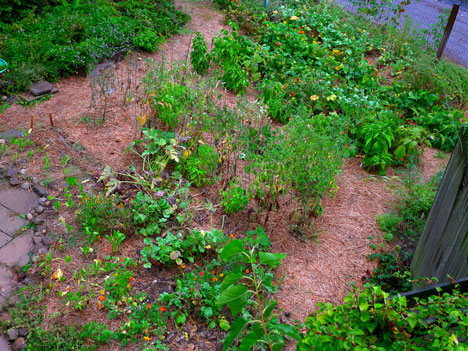 the rest of the garden is dying back slowly and while the squash is done, i’m still picking eggplant, peppers, tomatoes, and—of all thing—green beans. can you believe that? the ones i planted along the back fence just won’t quit. i tried ignoring them, thinking they’d get all overgrown and then die, but when i got home sunday afternoon, they looked so beautiful hanging there i couldn’t resist and i ended up with a tidy basket of long slender string beans for the fridge. just what we needed, haha.

i have got to find a good use for fresh green beans . . . maybe an interesting casserole?? (besides the obvious classic, that is). hmm.

what i’m really hoping is that the chard will make a comeback, now that the weather has cooled and some of the surrounding big plants have died back. i could really get into some nice fresh greens about now. ours sorta got stalled in july and have not recovered yet (though they are not dead or dying; just sitting there, being small). 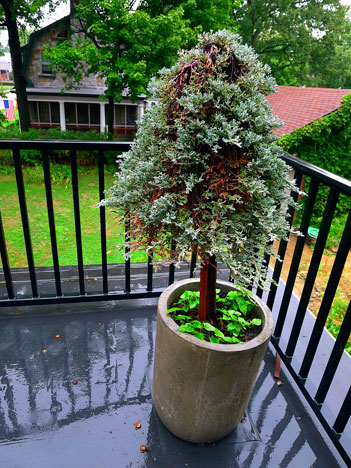 the potted plants love the rain.

ok, then, i’m done for today—that’s all she wrote. i’ve got to move on to pattern work and photo editing, but as promised, we will be back thursday with a big release, yay!