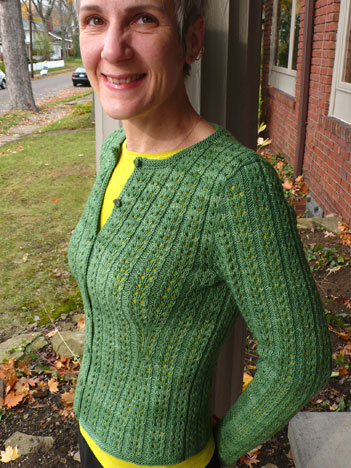 sprössling is done and i love it. it’s exactly what i’ve been picturing in my mind while i worked on it this last month or so. i’m happy with the fit, the color and the length (i made mine a little shorter for a lighter, summery look, but the pattern is written an inch longer). 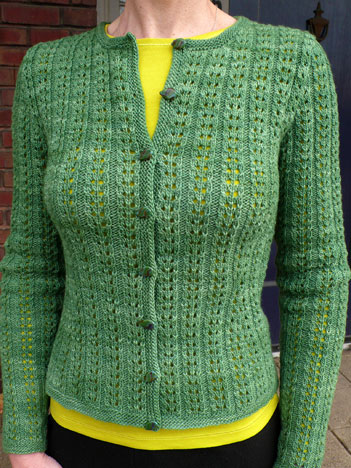 as you can see, it is quite fitted and at the same time, feels very comfortable (it’s a handknit, so that makes sense). this is what i love about sweaters vs. jackets—you can get a very fitted look in a completely flexible structure, so that moving about, it acts like a second skin instead of a straight jacket. 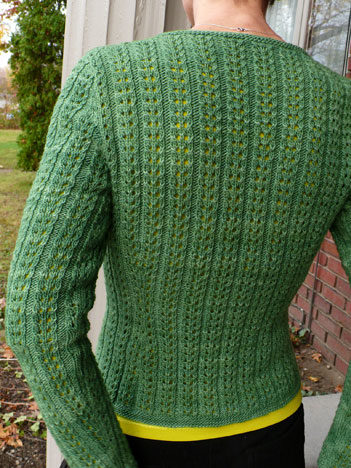 the flexibility allows it to conform to all the areas of one’s torso without bunching the way a stiffer, reinforced fabric would. 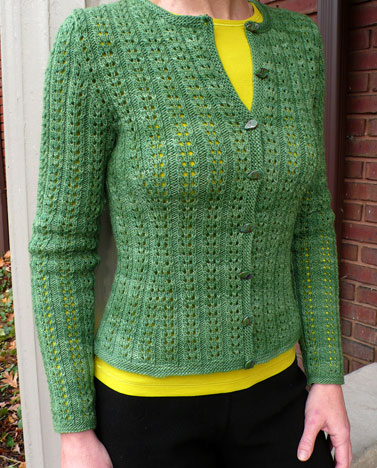 i wouldn’t want every sweater to fit this way, but i love that this one does; i needed a little piece like this in my wardrobe for variety and to wear with less bulky clothes.

it maybe could have used one more button, but i’m leaving that alone for now to see how this arrangement works out over a few wearings. if it begins to pull or sag between buttons, i’ll add one more. 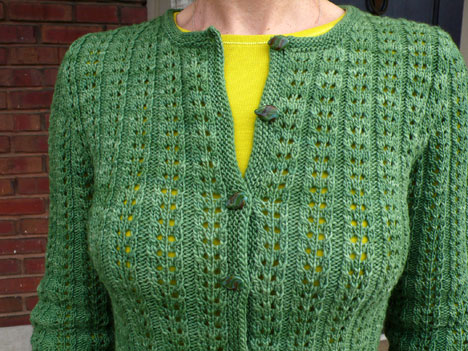 for now, i think it’s fine. the pattern is written to be an inch longer, so i allowed for a ninth button there.
i spent most of yesterday writing up the pattern and submitted it for tech editing last night, yay.

now tana will work her magic and ronni will work hers and the test knitters will work theirs and hopefully, we’ll have it ready to publish by the first of the year (maybe sooner, who knows?) 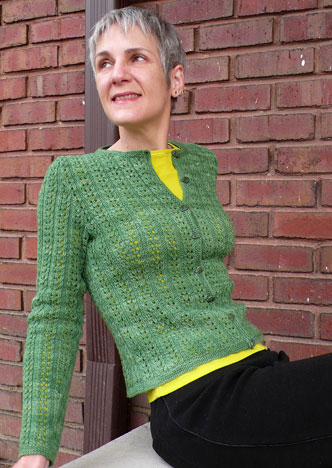 and the array of colors is mind-blowing—i used fern green for mine, but i’m drooling over that dark ginger rust. or how about that american beauty?? i can totally see sprössling knit up in that; it’d be adorable (and so flattering). 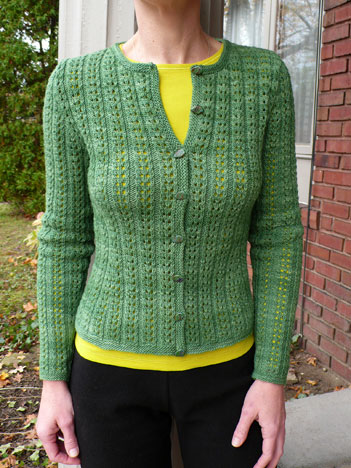 ok, i’m putting a stop to the yarnsex now—my heart is starting to race.

on another note, my title implies that something, somewhere, has gone terribly wrong. it’s not that bad and you might even have seen it coming—a correction needed to be made, which i was in denial about. you remember the other day when i was worrying about my henley?

well, after showing it to anne marie on sunday, who offered a very reserved (i.e., doubtful) response to the size, then talking to tana last night, and wearing sprössling for a couple of hours yesterday, AND having knit more than half a sleeve, i realized that my fears about the cabled fabric were most likely on target—it was going to feel tighter than i really want. 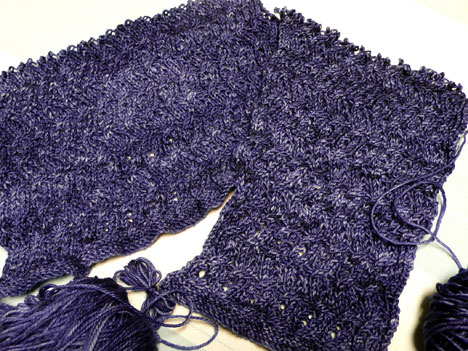 though the size was similar to sprössling, the fabric is firmer and has more elasticity—it might fit, but it’d probably feel like a corset instead of the soft, slightly-loose and comfy shirt i want.

i was foolish to keep knitting in the hopes that somehow, it wouldn’t be true—DUH.
(to be fair, in conversations with david i’ve discovered that the capacity for denial extends to other artisan crafts as well—it’s not just us.)

so late last night, after i mailed the last bit of pattern off to tana, and dawdled by talking on the phone with my nephew for an hour, and running the numbers again through my software to calculate a new pattern, i rose from my chair, sucked it up, pulled the pieces off the needles, and trudged upstairs for a conference with the ball winder.

and just like the last time i had to do this, once i got started, it wasn’t so bad at all. in fact, i was soon delighted that i could undo everything in just a few minutes with the ball winder and not get any yarn tangled (this approach does not work with every yarn; it’s possible to make a real mess of it).
i’m a glass-half-full lemonade maker; what can i say? 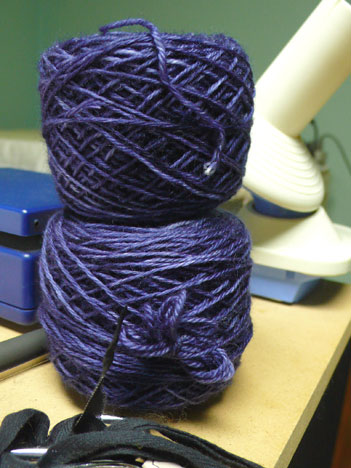 my sweater pieces were reduced back to usable yarn in no time. reknitting that front piece is kinda hard to take, but i’m actually sorta glad about that too.
i originally went with side-seam shaping on the henley because i thought it would work best with the cabled fabric. but after working with the (easily-shaped) cable more and seeing sprössling on, i was diggin’ the offset shaping so much that i regretted not using it on the henley. half-toying with ripping it back for that reason alone, i was almost relieved to have a practical reason to do so.

a few minutes after finishing the ugly job, i was casting on for a new sleeve with more stitches while we watched guest of cindy sherman by paul h-o, co-creator of gallery beat. 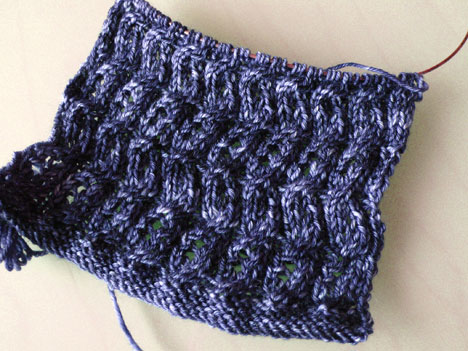 all’s well that ends well, as the great man said.