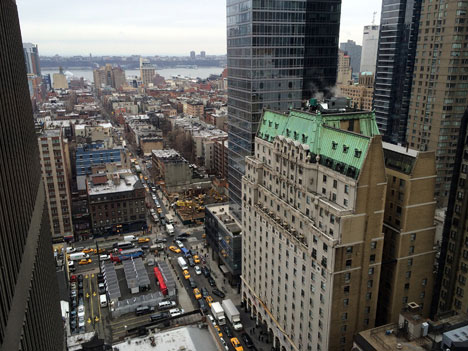 hello gang! oh heavens i cannot believe how quickly the last couple of weeks have flown by—what a blur. but here i am in NYC (actually, brooklyn at the moment but more about that later), winding down from an exciting weekend at vogue knitting live!

the photo above was the view from my hotel room looking out to the hudson river last thursday, when i arrived; isn’t that fantastic? i got in very early—before 9 am, having taken the first flight from home. once in the for i immediately passed out and had a good long nap to get ready for the weekend—sleep has been sorely lacking in my life lately, hehe.

once rejuvenated though, i immediately set out on walkabout to explore the city i love so well. being right in the heart of the theater district was new for me—i never live in this neighborhood or even stayed overnight there before. 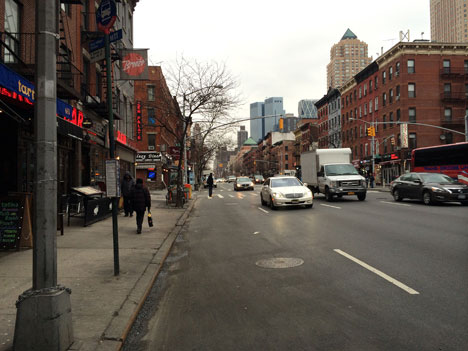 the last time i did a big walking tour for the blog, it was in the downtown direction along the river, so this time, i headed uptown, taking 9th avenue. 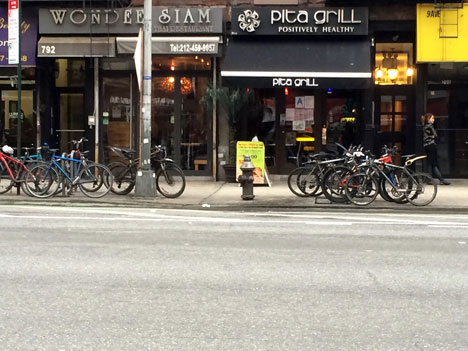 you wouldn’t think that so much could change in the short time since i was here last, but wow, this city does NOT stand still. one thing i’ve noticed on every one of my recent trips is the increased use of bicycles to get around. you never used to see bikes piled up like this in the past; it’s fantastic. i imagine that more activity around the bike parking areas is also a deterrent to the theft that used to plague cycling commuters. 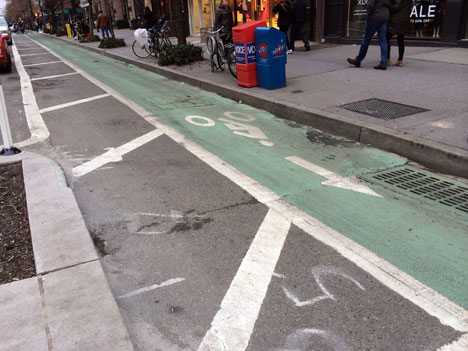 and the trend toward biking has been helped along by the city-wide provisions to make cycling on city streets a safer affair for everyone. with dedicated bike lanes, cyclists have a bit more protection from traffic and there is reduced distraction for motorists as well. it would be so nice if we had these everywhere!

anyway, walking to the upper west side, i noticed several new constructions projects going up between familiar buildings as well as a new location of my favorite department store. i didn’t go in that day because i wanted to be outside as much as possible, but maybe i’ll duck in if i have a chance tomorrow.

next i wandered the streets near lincoln center and just above, looking at the the old brownstones and snapping photos of my friend kim’s favorite places, texting her teasers now and then. we SO enjoyed our last trip here together; i hope we can do that again soon.

i must have hit it just right for christmas tree discard day, haha; on one block i counted something like 25 trees. it’s not every day that you are treated to fresh balsam scent on the sidewalks of NYC. finally, i came out on columbus avenue, just at one of the entrances to central park.

i love this park—and i feel that it is so misunderstood by people who have never been there. first of all, central park is HUGE—so big that once you are inside, you can completely forget that a hectic, overcrowded city lays beyond its borders. the winding paths, the beautiful plantings, the open meadows take you away from all that. central park is often depicted on television and in books as a dark, sinister place where something bad is guaranteed to happen to anyone foolish enough to enter. but actually, it is just the opposite. it was developed and maintained as a place where city residents and visitors could enjoy passing time in a pastoral setting, far from urban stresses.

i know that for myself, i always appreciated the opportunities i had to traverse the park in my daily travels from one place to another; having those moments inside the quiet setting, walking tree-lined pathways was a valuable respite from the hustle bustle of midtown errands and meetings.

the park is made of many charming areas with separate identities—from the lake and boathouse to the bandshell and poet’s walk—even its own zoo—there is something for everyone. statuary, small architecture, and lovely seating abound. if you ever have a chance to visit, it’s really not to be missed; plan for at least a half day visit, maybe before or after one of the big museums which are situated on all sides of the park. 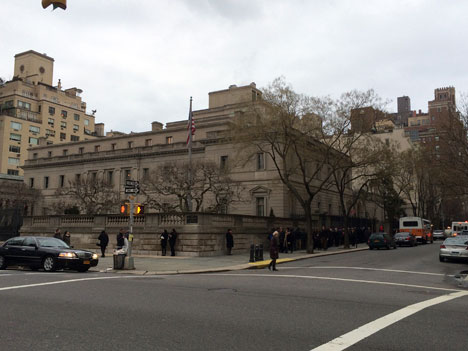 i could have spent a couple more hours in the park, but decided to save the upper areas for sightseeing during my morning run the next day. i popped out on 5th avenue just across from the frick, where the line was around the block to see the dutch masters show, which included a few vergers, i believe.

by now it was growing dark and i realized i’d been walking for at least four hours—time really does fly when i’m having fun. i was also beginning to feel hungry and decided to head back toward the west side to find some good eats. 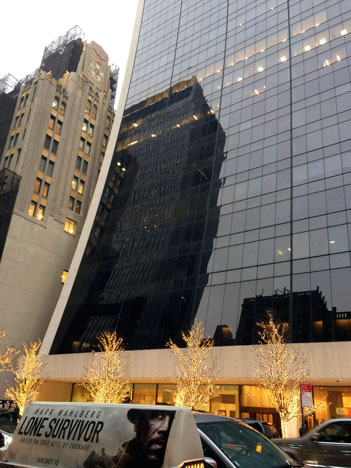 heading across 57th street in midtown, i was hit with a blast form the past—one of the buildings that david and i worked in about a decade ago, when we were creating graphics presentations for a consulting firm. 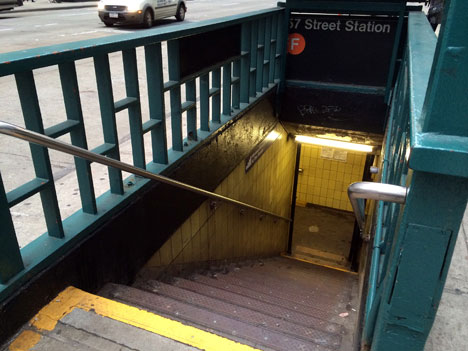 and right after that, our old subway station, where we caught the train back to brooklyn each afternoon. sigh. of course i texted him this photo right away.

back on 9th avenue, i took a tip from yelp and stopped in at pure thai cookhouse for a (very) late lunch. omg it was delicious; maybe even more so because i was ravenously hungry.  i highly recommend it for a quick meal. 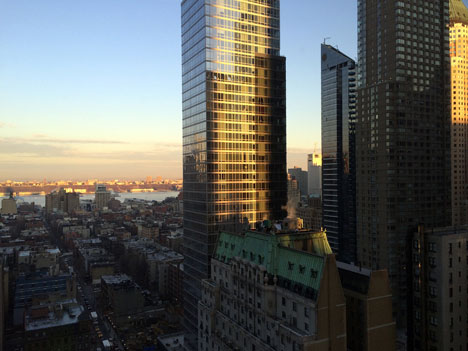 the rest of the weekend was a bit f a blur—from sunrise the next day until last evening, i was almost entirely consumed with teaching at the event. i got up early to catch a run or some gym time each day, in order to keep my wits about me, but there was very little time to get online or socialize. i did get a chance to visit and have dinner with kirsten kapur, gale zucker, and bev from trillium yarns; we had several hours to talk shop and enjoy each other’s company.

last night after the show was over, i traveled out to brooklyn to stay with my dear friend nancy; over knoshes and homemade soup, we talked the night away with cathy and it was the perfect end to the weekend. 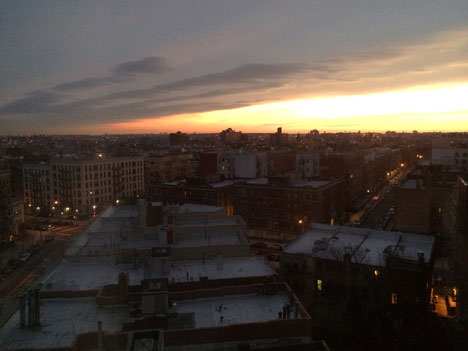 after a fantastic night’s sleep, i woke up to an orange-and-blue striped horizon, just beyond the expanse of brooklyn rooftops outside my window—how great is this?? i’m telling you, i felt like the luckiest knitter on earth.

i grabbed my knitting and joined nancy for a cup of coffee and a little chat before we both settled in to work for a bit. and now, it’s time for me to head out and enjoy the day—the sun is out, the air is as warm as it’s going to be for some days ahead; i think a nice long run is in order!

i will be back in a few days when i’ve returned home with some updated knitting and all that. in the meantime, we have our special edition, limited run, bay leaf and lime kit to be released tonight at midnight—a pretty triangle shawl pattern plus an exclusive colorway of yarn hollow superior. 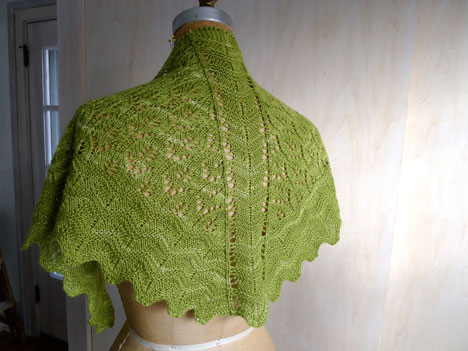