packing for my trip the other day, i was really glad i’d decided to fly on the airline that allows me to take two bags—i had to devote one entire suitcase to wedding paraphernalia alone! 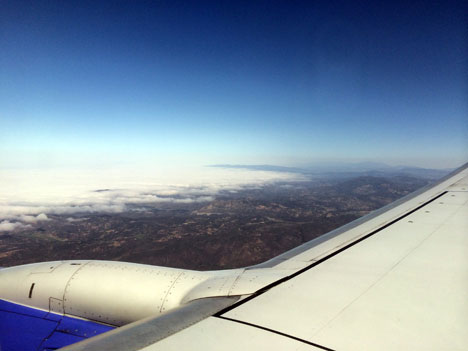 most of my plane ride took place in complete darkness, as i was flying from east to west, but as we landed, the sky was a beautiful sapphire blue—until we got below that thick marine layer hugging the coast.

i got tons of knitting done, completing the sweater back i had going and working a bit on a secret project as well. i’ll show you all of that in a weekend post.

below clouds, it was chilly, windy, and rainy; not as warm as i’d hoped it would be, but better than home, where it was blizzarding once again. 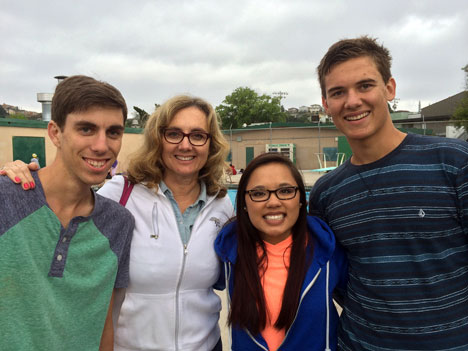 but sunny smiles all around from my west coast “family”. the afternoon was filled with errands and another trip to the airport; then it was time to head out to sam’s swim meet. 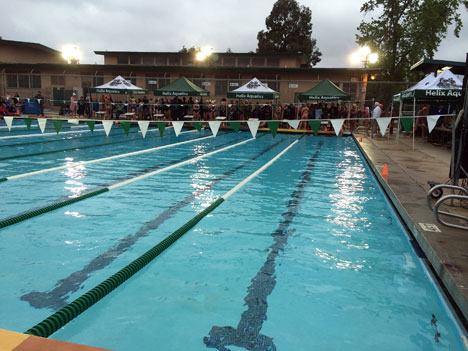 which was held outdoors unfortunately; the day became increasingly damp and chilly as it wore on. afterward, we all piled into the car and headed posthaste to a warm middle eastern eatery, mmm.

this morning i was up early for a nice long run, during which the sun actually came out for a while and i came home with ever-so-slight tan lines—to be developed further during the next ten days.

we had a lot of errands on the agenda for the rest of the day and naturally with so many last minute things to take care of, there were a few SNAFUs as well. by 9:30, kim was literally buzzing around the house putting out fires.

but before we headed out, i insisted she take a break to catch her breath and enjoy a little indulgence from her knitting compadres. 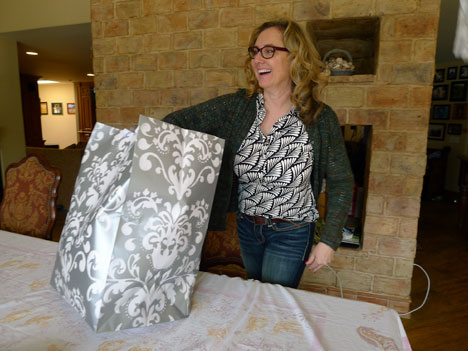 you see, i not only traveled to help celebrate the marriage of our dear friend kim; i was carrying precious cargo as well. david and i, along with about thirty of kim’s dearest internet friends have been hatching a secret gift project for a couple of months and finally the day has arrived to present it. 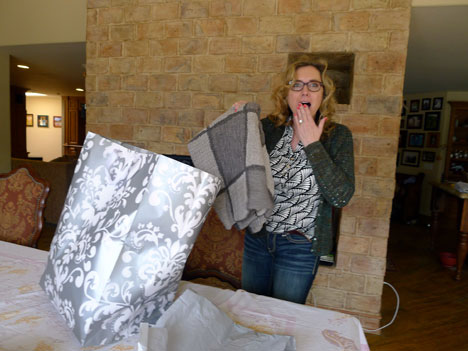 well, to say she was surprised would be the understatement of the year. you can see the complete story in the youTube video that her daughter xanning made, posted on the knitspot channel. 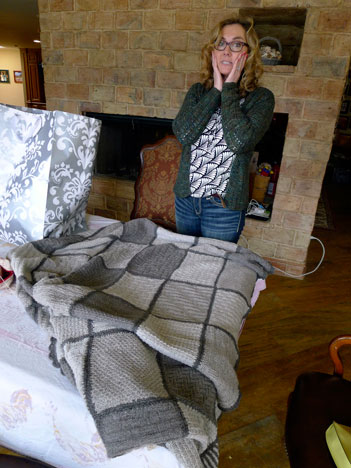 and the fact that thirty knitters who love to chat could keep such a wonderful secret from her was the best part i think. her genuine and unadulterated surprise was a real treat to witness; it made us all feel great. 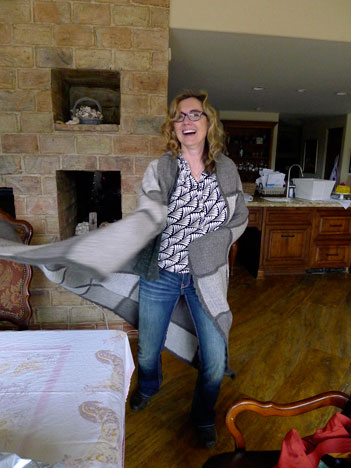 isn’t she fab?? this is why we love her and love doing things for her; kim’s joy for life is so completely contagious. it’s hard not to smile and laugh when i’m spending time with her. 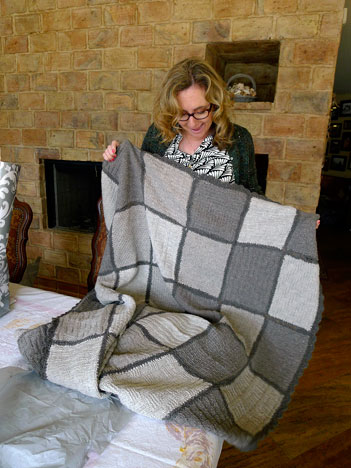 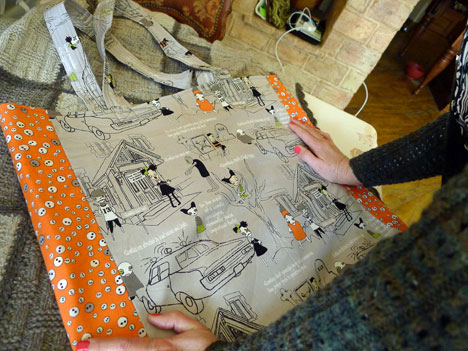 from fabrics printed with a zombie theme, inside and out; SO much fun and kim just loved that 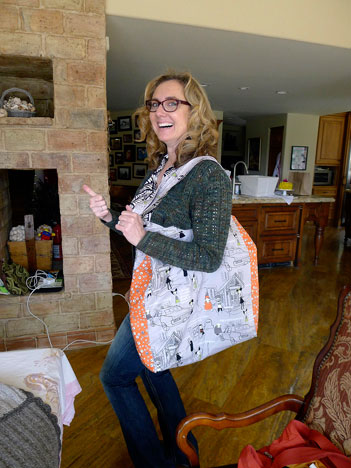 the last item in the bag was a special project made by the two newest knitters in the bunch. sarah, who actually learned to knit a bit too late to contribute a blanket square, wanted very much to make something to give to kim.

barb suggested that she and david could knit some blocks to make a pillow. 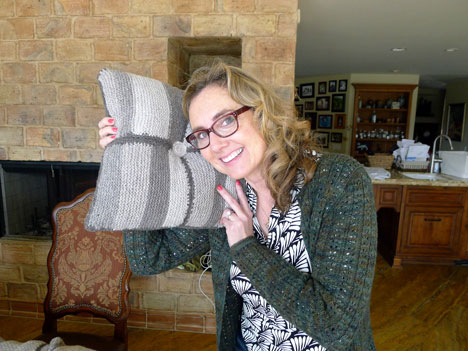 ao with barb’s help, they did just that and it turned out so cute! 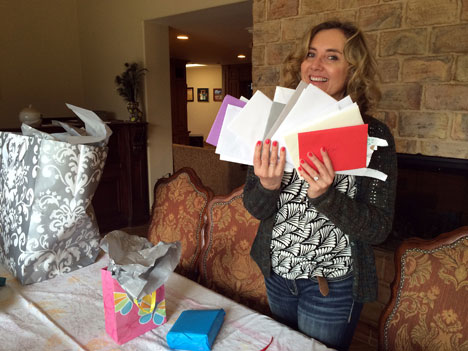 each knitter also sent along a card which kim is reading as i write this; she is just so touched.

i know it was a huge effort for everyone involved to keep the whole thing a secret, but i promise it was completely worth it. thank you so much to all who contributed!

we would have loved to spend the rest of the day curled up on the sofa painting our toes and watching movies while alternately admiring this beautiful gift, but realistically, there was a lot of running around to do. another trip to the airport and some errands 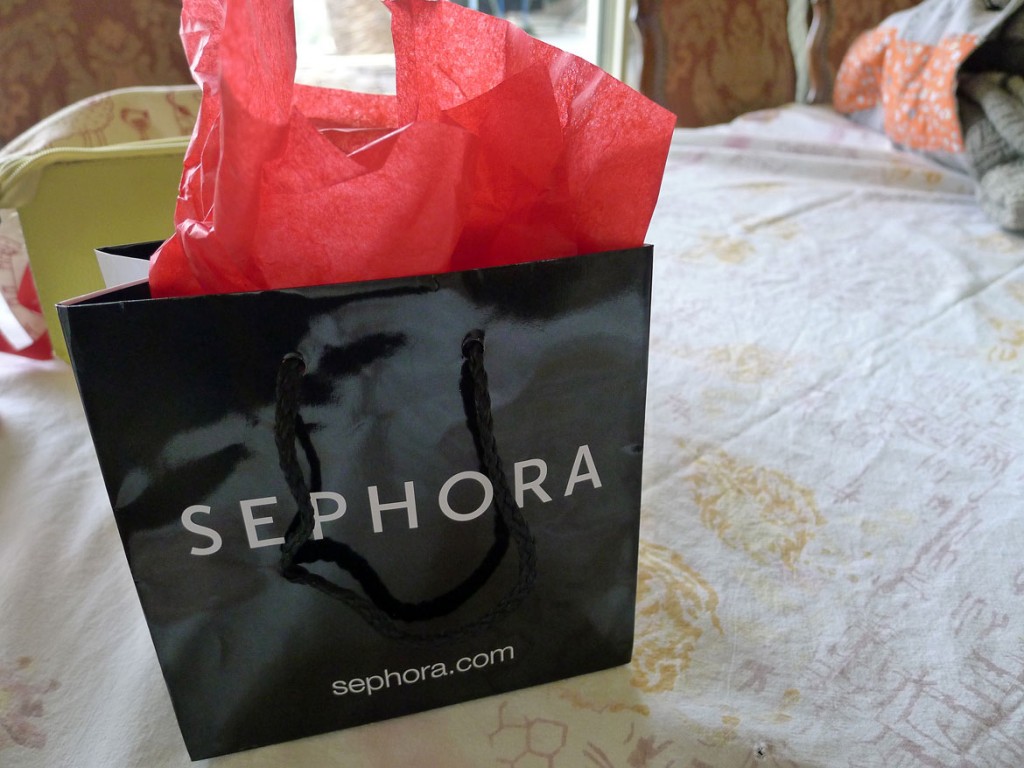 she had to stop at sephora, so i picked up some fresh spring lip color while i was waiting 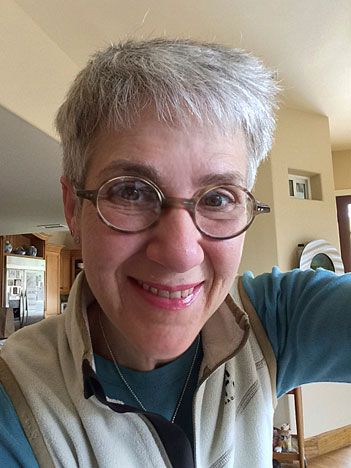 to go with my dress, haha. far be it from me to just stand around wasting time. 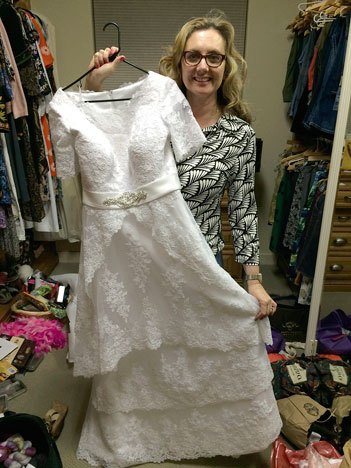 later on, while kim packed for her honeymoon trip to paris, i steamed her dress.

we are all set for tomorrow morning; we have to leave the house by 7:30 . . . AM. so i think this is probably a good time to sign off; i’ll be back later in the weekend with a wedding update and lots of party photos.

in the meantime, erica will be filling in on friday with a blog about something new. have a wonderful weekend; see you on sunday!

27 thoughts on “gifts beyond compare”