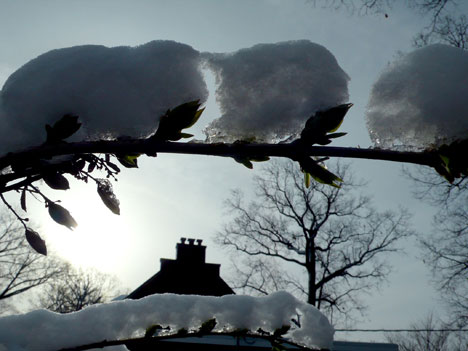 ok, mother nature, we know you love a good joke, but is this really necessary?

although. the sky is an incredible shade of blue this morning—just like every other WARM day this week. except it’s 28 degrees. and that’s after it warmed up a bit. 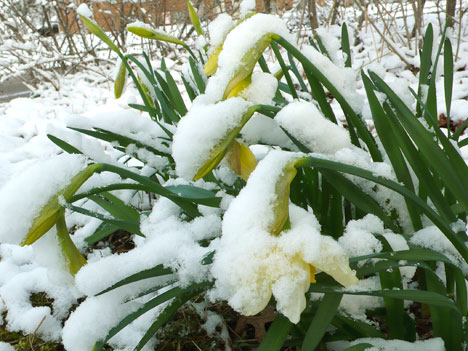 they popped fully open yesterday afternoon and by last night an icy draft of weather had kicked in to punish them. (they’ll recover; this has happened every year since we’ve planted them and they always survive mightily).

i had no idea it was going to snow—i don’t keep up with the news as well as i should. it was raining all last evening while i was focused on my knitting and barely aware of anything beyond my needles. then i got up to stretch around
11 pm and saw this outside the door 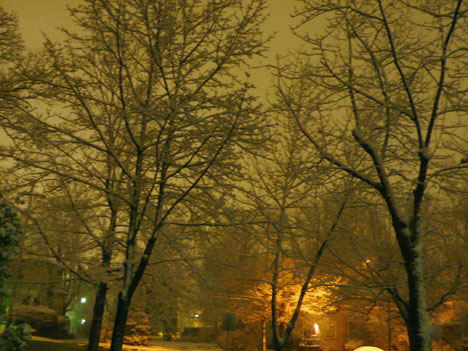 a scene much more suited to december than to the season we’re in right now. but then, that’s ohio for ya . . .

it’s not much but i don’t like the way it’s clinging in an icy coat on every single bud—the hydrangeas just started coming to life and they don’t care for this sort of thing. we missed having them last year because a similar storm at this same time burned the buds.

the lilac will be ok, i’m sure (thanks for the great tips everyone, about how to rejuvenate them; we’re going to try that)

it’s a good thing i have knitting to cuddle up with and distract me.

i haven’t fixed the beret yet because i wanted to finish up my last pine and ivy and after that, i felt like doing some easy knitting. i had plenty of less challenging knitting on the needles to play with. 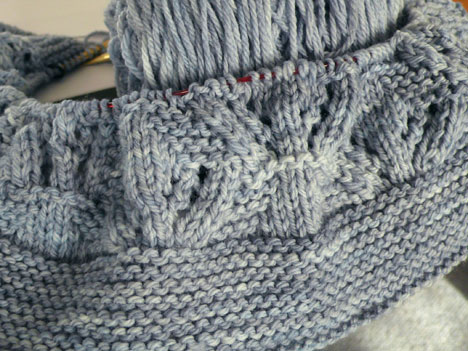 the first baby blanket is on its way, after i ripped back and reknit the border on a smaller needle (i meant to start the first time on the smaller needle and i forgot). this is such an easy and soothing project—doubly so because i’m knitting with this soft, delicious classic merino sport from knitting notions. i’m enjoying how the pattern looks like little cradles rocking. i keep stopping to admire the perfect blue colorway, but i can’t help but note the irony—winter sky indeed.

i got this far while we watched a rather bad movie about coco chanel—the story was a bit choppy and not well written, but i will always be entertained by great costuming and satisfied to watch scene after scene of sewing and millinery work (it was really good for that).

i seriously think someone should create a fiber network, where we could tune in an just watch hands at work in all manner of needle arts. channels devoted to the production of knitting, sewing, millinery, beading, spinning, and the like, with and without words. even factory work and manufacturing of materials—it would be fascinating and very calming.

if i had the time and skills, i’d do it myself—i can see the whole thing in my mind. but sadly, i’m lacking that way. . . . all i have is a very active imagination. which i really shouldn’t share so readily; it can make me sound crazy.

anyway, i was feeling kind of chilly and achy last night (i’d got into a new yoga pose the day before that left me feeling a little sore; it was one of those one-legged ones that i usually can’t do—i have awful balance—and i was so stunned to be doing it that i stayed there to see how long i could actually hold it and now i’m sorry, haha. i’m not in pain; just feeling muscles that i didn’t even realize could get sore. i dunno why i didn’t think to just. stop.).

so i needed something cheery to brighten and warm up my evening and i went back to work on swatching with my neon STR mediumweight (rare gem colorway, scored by my friend gail). 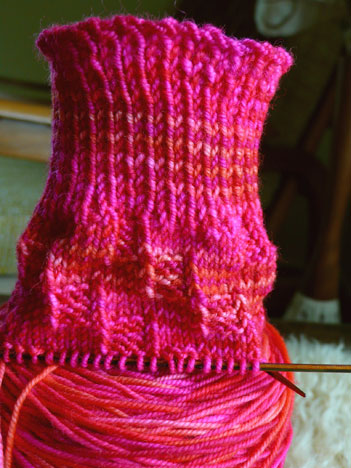 and i finally hit on something i like a lot. the pattern progresses with the spiral of the colorway, while bending and squeezing a bit for an optical effect. i’ve had this motif earmarked for a couple of years, but never found a yarn i liked it in. this tight-twist yarn does the trick; its stiffness and spring accentuate the pattern and the bendy turns it takes.

working on it last night was like having a little fire in my hands; i enjoyed it so much i forgot about working on anything else. it doesn’t look like i spent all evening on, but it took hours to get this far—mostly due to my own mental sluggishness. first, i knit a couple of swatches before i started because i just had to be sure, you know? then i started and knit some and decided the cuff should be different, so i ripped back and restarted. then i realized i’d meant to make the pattern travel in the opposite direction, but i’d forgotten, so i needed to go back yet again (just partway this time). now it’s good.

and because i’m still enjoying everything about it after all that, i know i’m on the right track.

once i was set on the right course with that sock, i went upstairs to watch late-night TV with david and took up my fearless fibers sock again. 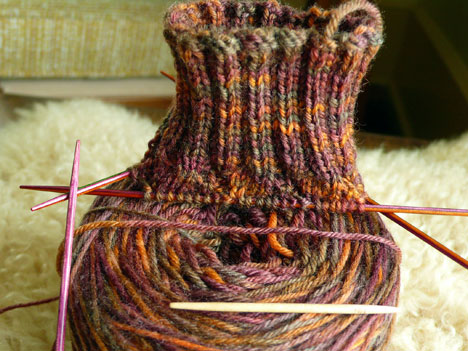 i just adore deb’s MCN luxury; it’s so smooth to knit with and feels yummy going through my fingers. the fabric is lovely; i can’t wait to test drive it underfoot. and the color is truly sublime, with soft transitions and little glints of light.

i know i said something in the beginning of march about taking a break from socks but obviously, i was talking out my back pocket—who am i kidding? not having new socks underway is like not breathing; i just can’t do it. and i like both of these so much. one is very loud and cheery and fast to knit. the other is soft and sophisticated and sensual. i love them both.

i’ll get back to the beret project this evening and maybe work on the blanket a little more, while i try to stay warm and hope for a thaw.

right now, it’s time for a little of the hair of the dog that bit me—as bad as the prospect sounds at the moment, a session on the exercise bike and a little after-yoga to stretch should warm up these stiff hip muscles and set me right as rain. or snow.

have a good weekend wherever you are. 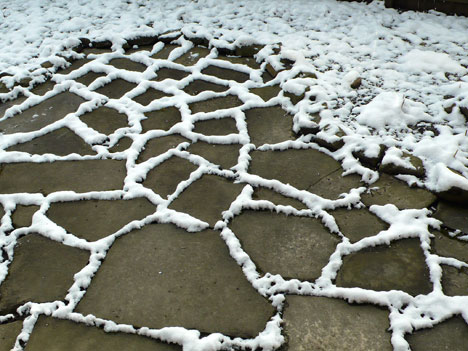