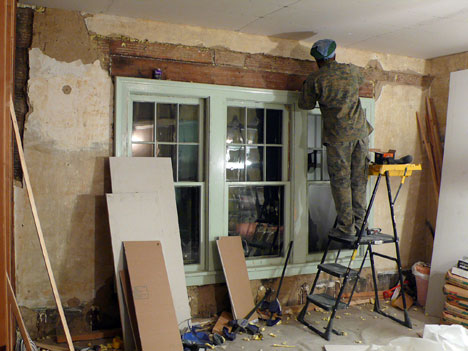 captain, it appears we have achieved a ceiling for the unit in question.

if you’ve been reading this blog for a while, you probably know that some part of our house is always under construction. 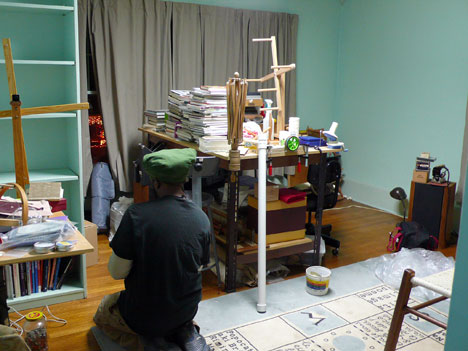 in december, we emptied the studio i’d been using for the last six years 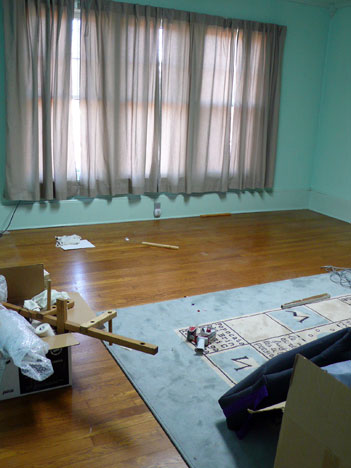 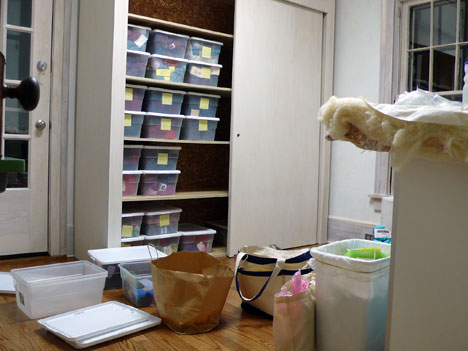 demo took a while; one wall that had three layers of old wallboard and the rest had multiple layers of wallpaper and “faux finishes”. plus, he had to “button up” the old areas of plaster he wanted to restore to secure them. 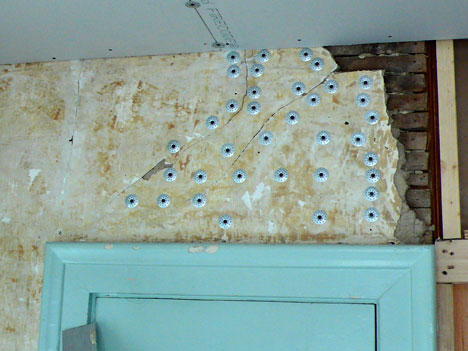 then he found a leak in the roof once the dropped ceiling was removed; while he waited for the roofer to fix it, he completely rewired the room and fixed a bad vent pipe situation that was going on. 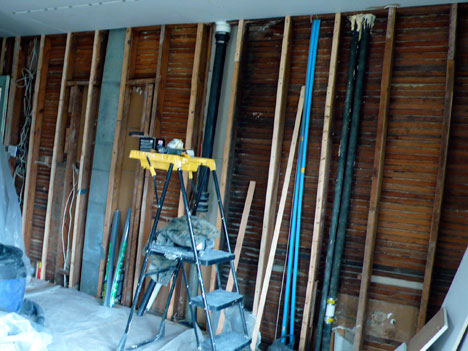 the room has been completely sealed off during all this to keep the rest of the house free from grit and i haven’t traversed the triple-plastic-sheeted doorway or ventured through plastic-lined tunnel to see the progress; i mean, what progress and what would i have to add to it, right??

i just pay the roofer and the credit card bill—that’s my job.
at the end of our work day on friday, david casually mentioned he was making a trek to home depot.

two hours later, he drove up in a big rental truck with a load of over-sized wallboard, about a dozen bags of plaster, all sorts of other stuff, and—the icing on the cake if you love DIY—a wallboard lift.

you know what that means? 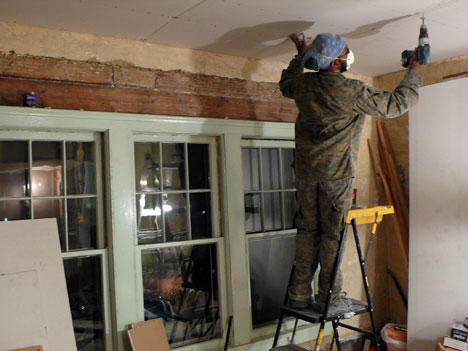 we are getting walls and a ceiling. yay.
now that we are rid of the old dropped ceiling, the new one one could be placed back in the original position (about a foot higher) which will improve the lighting angles immensely.

it was a noisy weekend, full of the whining sound of screws going through wallboard, but worth it. i think the next step is plastering, which will bring the room out of the dark and into the light (pssst, my personal stash is sealed inside that closet, like a time capsule). 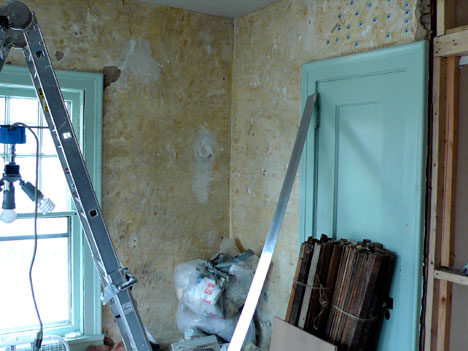 david likes to restore the old plaster whenever possible (i just love that scraped surface; i wish we could keep it that way), and this is possible for three walls, but one whole wall needs to be replaced as well as the ceiling, so he’ll do new plaster over the wallboard he’s installing (as in all the other rooms he’s done).

i tried not to let the incessant noise get to me—i know there’s no way around it and that some day, this house will be a light-filled sanctuary of clean and quiet (at least, that’s what i tell myself). but the whining drill does wear on one after a bit . . .
so as much as possible, i plugged in my headphones this weekend and escaped into my knitting and my book (i didn’t think this book would be so engrossing, but it is). 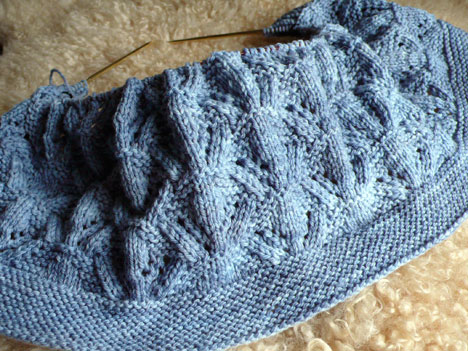 i got a couple more repeats done on the knitting notions baby blanket. it looks so neat and crisp, i can’t get over it. the yarn is super soft so i didn’t expect such great stitch definition and clean edges. the fabric has the merest amount of stiffness, which i’m glad for, because that means there’s room to grow in the blocking without losing the texture. 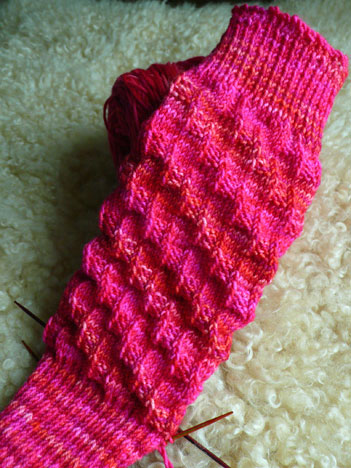 i also got lots done on my neon STR sock; working with heavier sock yarn is so gratifying and the colorway is sheer joy (a rare gem). i wrote the pattern for a normal leg length, but after weighing my yarn, i decided to add a repeat for my own pair. it’s nice if heavy socks are higher than my boots to keep the wind out. i hope i won’t end up paying for this later . . .

i love the texture and what it does to the overall fabric. mmm.

part of the weekend was spent working on patterns, bookkeeping, and meeting with the tax accountant (they’re done, yay!). i think i’m honing in on a new design for the beret, which i hope to begin working on that tonight. and i have a new shawl design brewing that is keeping me preoccupied . . .

in the meantime, i also got some inches added on to the other new sock, a cabled affair in fearless fibers MCN luxury in colorway sublime. 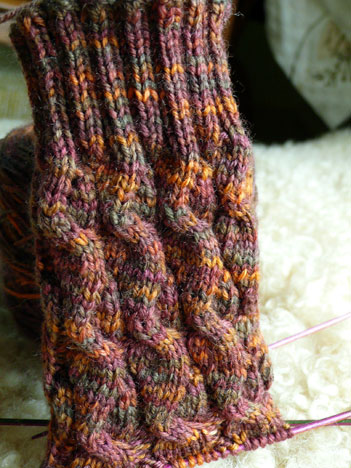 it’s a completely different sock knitting experience and a nice change of pace from the heavier, brighter sock—soothing. this cable has a bit of lace to lighten it up—i tried to get a photo, but i’m not sure if you can really see the full texture.

it’ll be easier to see once i can put it on my foot.

i gotta get going soon, but before i do, i want to mention a change in my schedule for the philly trip . . . i will now be teaching at loop both days of that weekend (april 10-11). we are adding a day of saturday lace classes to the loop lineup; please visit craig’s site to read more information about them and to register; it promises to be a really fun weekend!

tomorrow, i’ll be guest blogging at craig’s blog—i’ll let you know where to look . . .