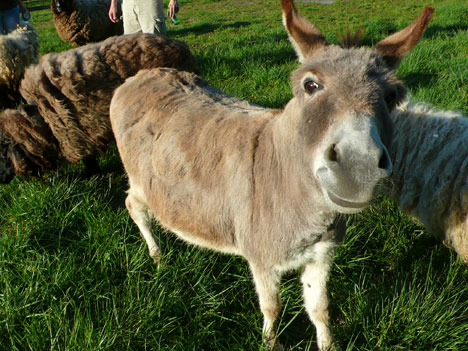 so yeah, we went to maryland sheep and wool this weekend sorta last minute, not really to go to the show, per se, but with a secret mission to accomplish in the area. i didn’t want to tell you about it til it was all done and decorated, fearing that i might jinx it.

so fairly early on friday morning (for us, anyway), we piled into the car with just a few overnight things and headed off. it was a spectacular day for a trip; after a chilly week, the sun shone bright and the air was very warm. we plugged in a good book and settled in for a nice drive.

david did the favor of driving the whole route and i knit almost all the way through my second movie night sock in STR lightweight (paula mae colorway, soon to be available). 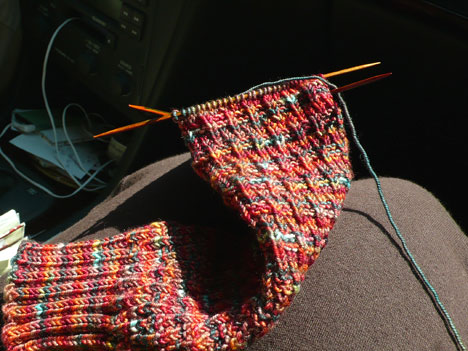 i brought several sock projects along, in fact, and good thing too; i got all the way to the toe on this one in the car and ran out of yarn just before the end. i should have made my leg section a little shorter (four rows on each leg would have done it, darn!), but i’m a gambler. i have some leftovers from another STR sock that will probably do, but if anyone out there has a little paula mae left over to swap, i’d be all ears.

anyway . . . back to the original story

last year i went to MDS&W, spent all day in norm hall’s booth and fell in love with a spinning wheel that, with much regret and knowing full-well that for the time being, norm is not taking orders for new wheels, i walked away from in the end. afterward, i felt like a donkey for not buying it when i had the chance, but we really needed new front steps and i thought that just maybe, a day would come when i was in a better position to purchase one. then i started saving my pennies (and whatever else i could spare).

fast forward to april 2010, when i was at sock camp and happened to open my email early on sunday morning. two frantic messages from vanessa and kim were in my box, telling me to hurry up and go to the ravelry spinners swap board—someone was selling a norm hall tradewinds wheel.
the very one!

so i hurried over, PM’d the seller, begging and pleading, bonnie, and secured the sale. a win-win for both of us, just like that—sometimes, waiting for the right moment really works out. we tossed around several ideas for how i should pick up the wheel and after talking it over with david, he thought the best plan would be to go to maryland to meet bonnie and drive it home.

we got there mid-afternoon and met up with bonnie and her husband; the wheel is a real beauty, just wait til you see it. bonnie and her husband are fiber folks to the core and we had a nice hour or so of chatting with them while i spun a bit and got introduced to my new friend. after that, we sealed the deal, packed the wheel away in the car, and set off for eleganza yarns (you remember i went there to teach in february?). we were to meet up with erica and head out to kristi and paul’s place for an evening get-together. i met erica at sock camp and now were meeting at kristi’s—isn’t it a small world? 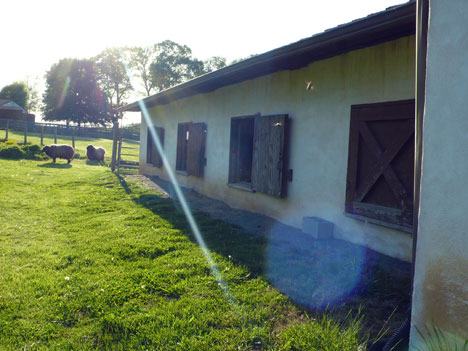 kristi and paul have a wonderful little farm outside of frederick, with two of every sort of animal. it was a gorgeous, golden evening, the kind you remember as having a quintessential summertime feeling. the grill was heating up, people were making their way up the drive, drinks were cooling on ice and chips were poured. we chatted in the kitchen for a bit and then headed out to visit the corral. 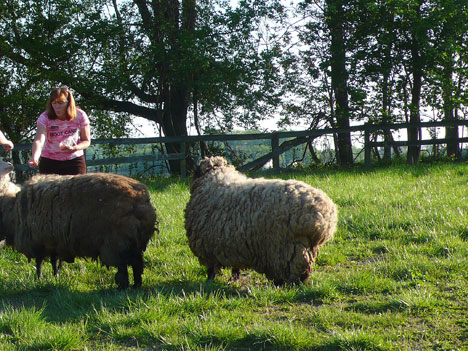 kristi is a favorite, obviously, since she’s usually packing some carrots or something the sheep love. but actually, lara was a big hit with them too—they were glued to her side there for a bit. seems they like beer as well as carrots . . . 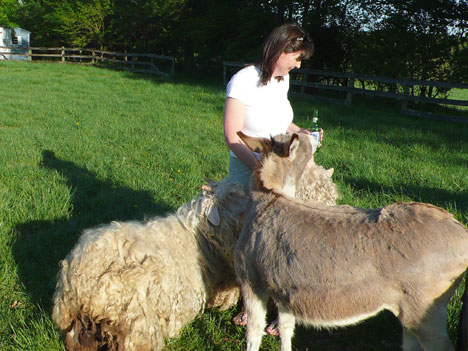 the donkey is my personal favorite, but the sheep are pretty cute, too. one of them is a rare breed that i can’t remember the name of (kristi told me three times at least, but ah well, i can’t recall it).

the barn is really cool; looks like david gave it a careful inspection—we both love this type of building, with wide open spaces and lots of interesting light. 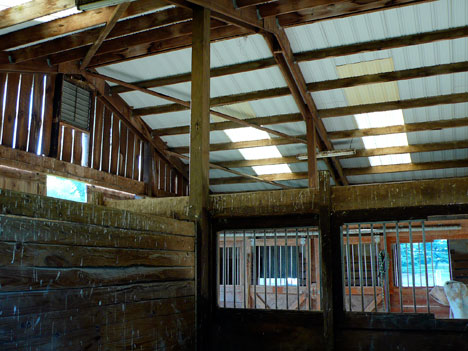 the stalls were just beautiful. this would make a fantastic workshop space, don’t you think?

we couldn’t stay into the evening, as we had a date to meet up with our nephew james for dinner and an overnight stay. so we said our goodbyes as the sun began to set and headed down to columbia. we had some pretty good pizza for dinner and a great night’s rest and the next morning, we headed for the fair. 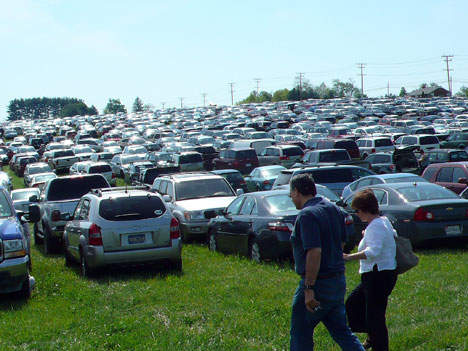 it was another stunning day—the first truly hot day of the year for us (it tends to be a bit cooler in ohio). traffic was backed up pretty far from the fairgrounds—it was going to be very crowded (not like last year, when we drove right in). 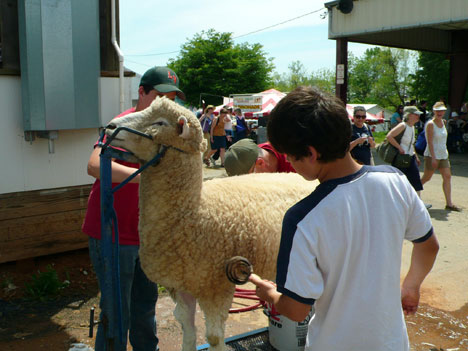 sure enough. wow. we got into the fairgrounds and walked around the outside booths for a while, then headed to the big building. it’s a bit overwhelming to see so many fiber fans in one place. we walked the aisle, agog, literally. then we saw a familiar face 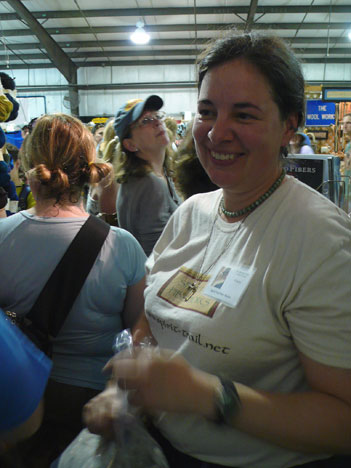 it was jennifer from spirit trail fiberworks. her booth was packed—and with good reason . . . she has gorgeous yarn and fiber, lovely samples, and she’s so committed; who could resist? 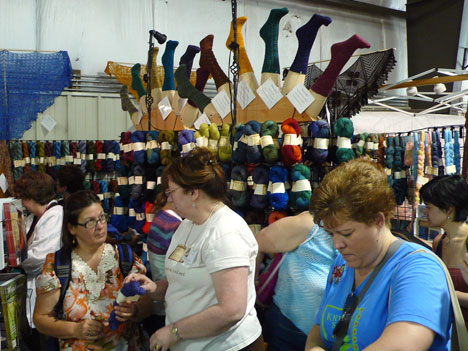 i love the newest addition to her booth, the sock display arching over the top—it’s brilliant. 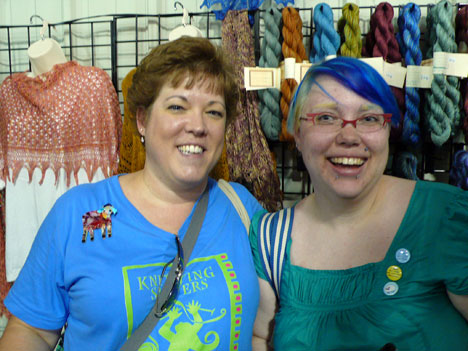 not to mention her fans—these two fun ladies (i know you told me but i can’t remember your names now!!) and i were happily trapped in the back of the booth for a while, resulting in way more shopping than any of us thought possible in such a small space. in addition to incredible hand-dyed yarns, jennifer specializes in rare breed spinning fibers and always has a tempting selection of things for those that are looking for something different. in fact, she sent me home with a bag of north ronaldsay fiber in natural gray/blue to spin on my new wheel. 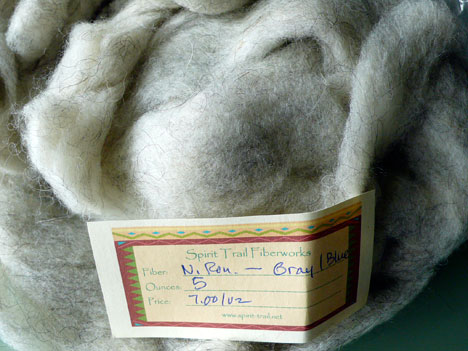 we’ve been trying to get together to look at her yarns for a while and i was really glad to have the chance at the show. her booth is always busy, no matter what show she does, so we just dove into the fray and got started. jennifer works with a number of yarn bases in all weights, each one more lovely than the last. she sent me away piled high with samples 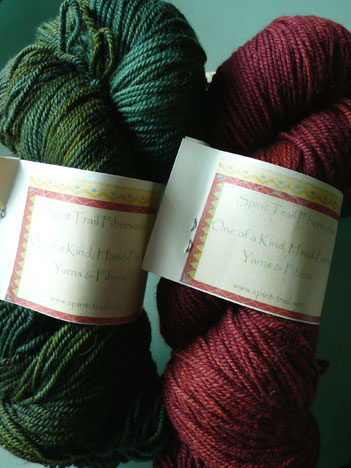 in colorways green velvet and rosewood.

one of these yarns will become a sweater design i’ve been contemplating—i’ve been searching for a yarn with just the right twist and bounce and i’m pretty sure one of these is it. it’ll be a challenge to settle on a colorway; i see lots of swatching in my future . . . 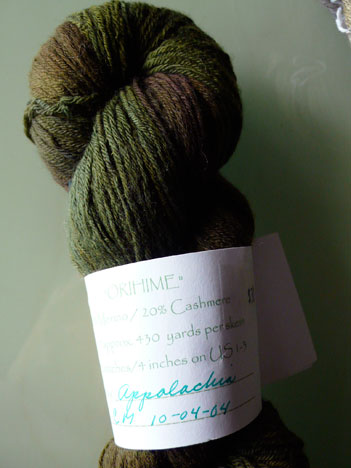 this is another one not listed on her site yet—orihime, a 4-ply merino/cashmere blend, in colorway appalachia. 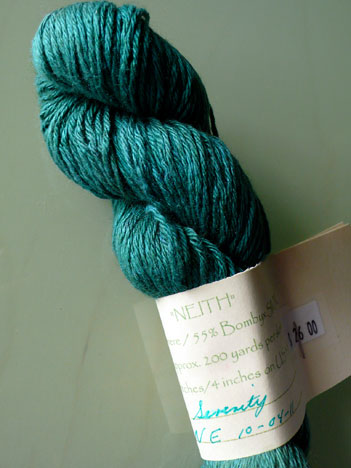 and finally, neith—a 4-ply cashmere/bombyx silk blend in an impossibly beautiful sea blue/green colorway called serenity. holy cow; i was overheating just from the excitement of it all.
there was much, much more and some day i will explore it all, but this is plenty to keep my brain busy for a bit. thank you, jennifer!

after bidding our adieus to the spirit trail staff, we wandered a bit further, appreciating rugs, yarns, and fibers on all sides, mostly from a distance—it was nearly impossible to get into most of the booths at this point.

still, i had a couple of specific things i wanted to look for. i found the carolina homespun booth and my friend morgaine and dove into the far reaches of a bin on the floor of the back corner, soon finding what i wanted. 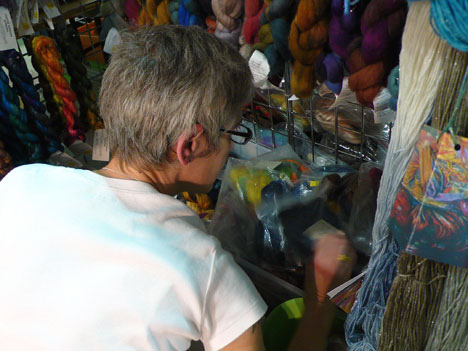 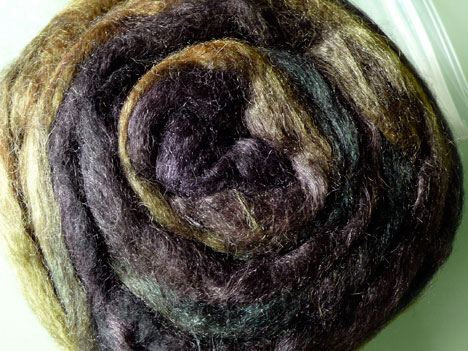 i purchased one of these at rhinebeck, having just spun up a similar packet in the evergreen colorway, which eventually became a pine and ivy shawl. and well, you might remember that my yarn supply for that piece was a nailbiter all the way to the end, fraught with chills and adventure.

much as i enjoyed that little caper, i may not wish to repeat it in the future and with that in mind, i vowed to secure another packet of the fiber so as to have plenty of supply for my next handspun shawl. no sense tempting fate twice . . . 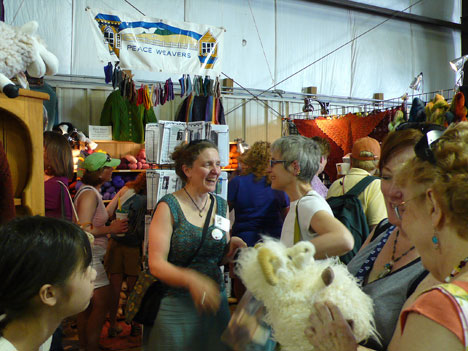 a little further down we came across the peace weavers booth and stopped to say hello to melissa. i think you can get a sense from this photo just how crowded the place was—and we were in the big barn.

we headed outside in search of water or something cooling and found ourselves right in the thick of the food aisle at lunchtime. fortunately, there were a couple of stalls with short lines 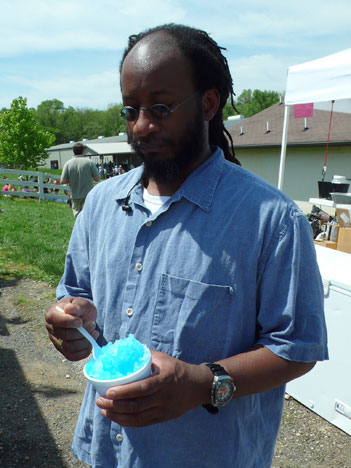 including one that sold sno-cones, a favorite of david’s. i had never actually tasted one, so i took a chance and tried it. maybe it was the blue color, but i didn’t care for it—kinda chemical tasting—all the more for him, right?

we mosied toward the smaller buildings and made to enter a couple of them, but honestly, they were so jammed it made me clammy just to think about it. i wanted to look up a few more people, but wondered if i’d even get close to talking to them. at this point the sun was high and it was very hot; we were starting to be concerned about the wheel we’d left in the car and decided maybe we should head home. 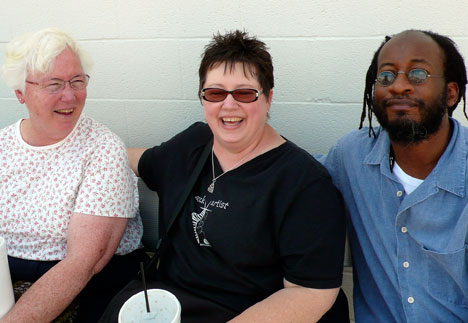 we saw a few more friends as we ambled toward the parking lot, including kathy, from kansas city. i see kathy at nearly every fiber event i attend and i’m awed by her willingness to travel.

i really appreciated the air-conditioning in our car for the trip home; i think we were halfway there before i felt dry again. we finished our book (which made us laugh a lot; it’s funny) and enjoyed the nearly-empty roads on saturday afternoon.

we got in with plenty of time left in the evening for setting up the new wheel. a little cleaning, a few adjustments, a new driveband for spinning in double drive and i was set to go. this morning, i got up early to photograph it so you can appreciate the fine details and accomplished workmanship of this precision instrument

each part is just enough of a presence to do its job and not more. 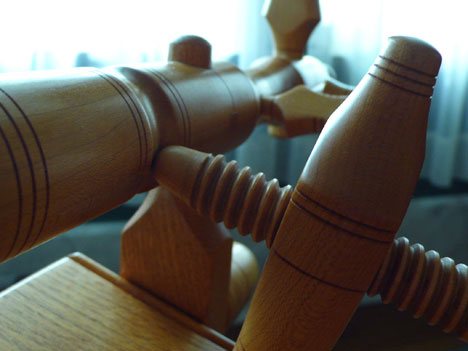 each piece fits exactly into the next, but as softly and effortlessly as possible. 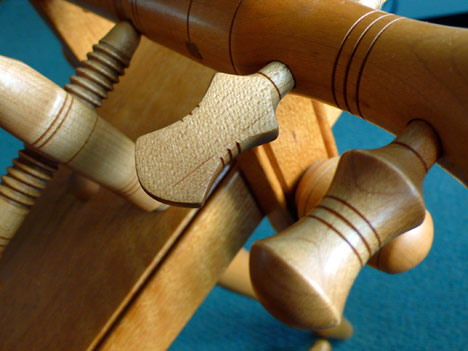 i love the simple whimsy in the shapes of the parts—they remind me of chess pieces. 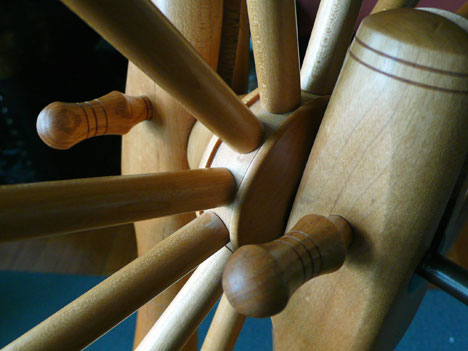 while i appreciate wheels with ornate turnings, my favorite motifs are simple and abstract 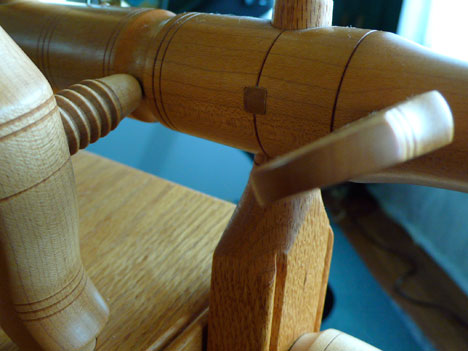 these repeating carved lines, punctuated here and there by a square or round peg, seem just right to my sensibility; almost musical, in an appalachian way. 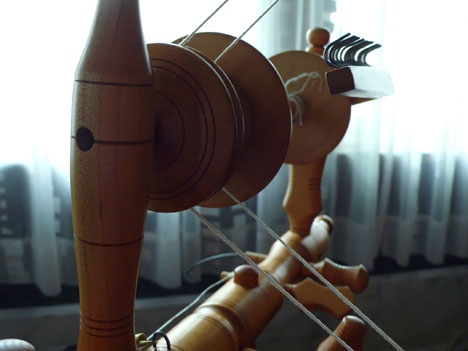 and don’t even get me started on the satiny, hand-rubbed finish. sublime is about the only word that comes close to describing it. 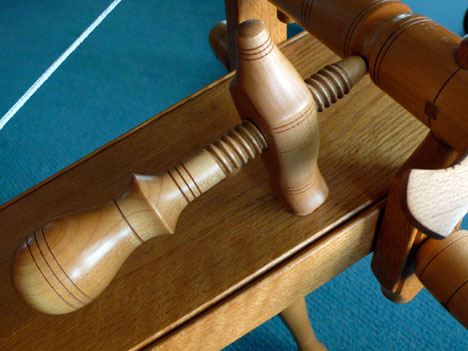 sigh. i love my new wheel.
will keep you updated on our adventures together . . .

61 thoughts on “things work out just as they should”