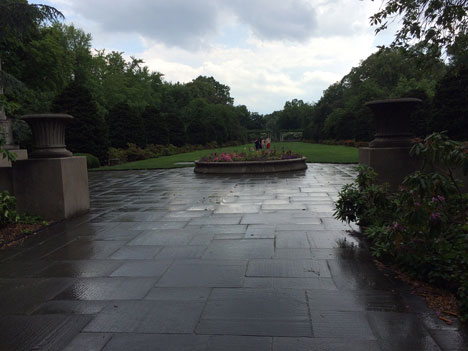 and out again. for tuesday there were predictions of thunderstorms and rain all day, so i took a rest from running and worked instead. when no bad weather had materialized and it looked like the sun was out for good, i headed out for a late afternoon exploratory walk.

naturally it poured.
maybe i was ten or fifteen minutes away—just far enough not to see a familiar haven—and the skies opened up. luckily i was up on eastern parkway, where there are walking lanes with deep tree cover; i was able to stay mostly dry as i scampered back toward home. 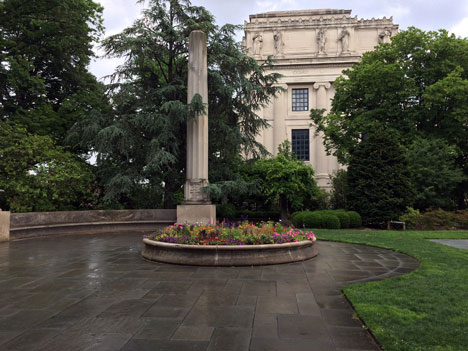 i was almost there when the storm passed and the sky began to brighten. i found myself at the gate of the brooklyn botanic garden and noticed that the ticket windows were closed—it was the free day. so i turned in, determined to make something of my walk after all. 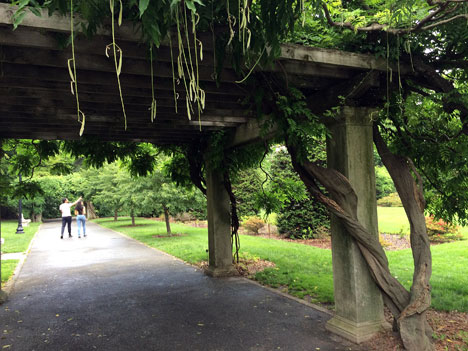 the botanic garden runs alongside and then far behind the brooklyn museum, kind of wrapping it with a luxurious swathes of woods, gardens, and quiet space, much the way central park surrounds the metropolitan museum in manhattan.

in fact, without saying that “brooklyn has everything that manhattan has”, well, it kinda does—and MORE. i mean that in the very best way; brooklyn has standout cultural centers, parks, museums, and libraries, as well as neighborhoods of incomparable variety—but in its own vitally unique and separate way. to make use of another possibly tired phrase about brooklyn—it’s for the people.

all the while manhattan is doing its thing, brooklyn is across the river doing its thing; only brighter, more inclusive, and very creatively. for instance, as soon as i pass through the osborne garden—the most formal space on the property—i get much more a feeling that the whole garden environment is mine to explore as close and deep as i want. 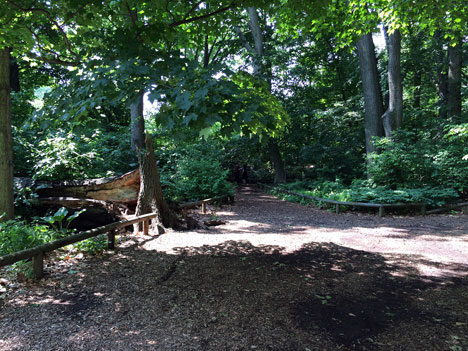 i walked through a gate into the woods and suddenly, i was in the thick of it—paths so narrow in some places that two people can’t pass. the density of the woods is like something you’d experience near a lake upstate and the quiet . . . totally refreshing.

back out on the main walkway again, the sun was out in full, the day was suddenly bright and sparkling with a  rain wash. i stroll by flower beds and a water garden and notice that a lot of people are heading to the rose garden. then i remember that it’s june and you know what blooms in june . . . 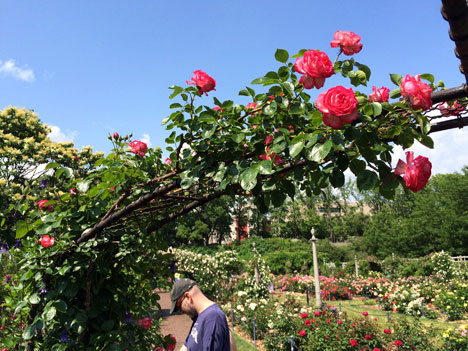 oh boy, it was like fireworks in the daytime; i don’t think i’ve ever seen so many roses (and no wonder my allergies have been kicking up all week, haha).

the pictures don’t at all do it justice, but let’s just say that more IS more in this case. it’s almost too much of a good thing . . . i wonder how many jillion roses there are in there? 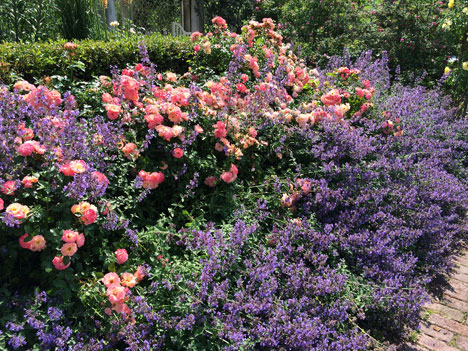 this was my favorite spot in the rose garden—just crazy wild color and form. 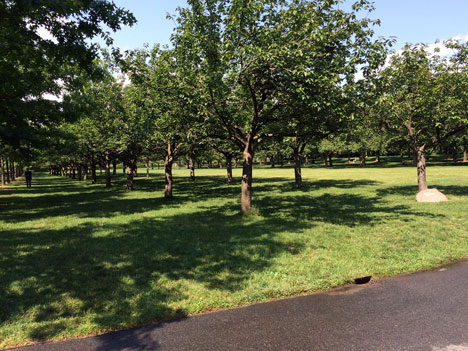 by contrast, the cherry esplanade around the corner is the essence of order and calm; just the perfect counterpoint and a sight for sore eyes. long allays to walk between the trees with benches each side. i was surprised to see how many visitors had stretched out to doze on a bench, succumbing to the heady mix of sun, steamy air, and pollen overload. i thought it was really cool that they felt so comfortable sleeping in a public garden.

next i walked for a while without taking any detours from the path, although there were plentiful opportunities to get into the rock garden, the japanese garden, and multiple wooded areas (see gardens within the garden).

suddenly my eye was captured by this handsome piece and the first thought that flashed into my mind was, wow—they have a louise nevelson that they can keep outside? well of course it wasn’t; who the heck would keep one of those outside??

but can you guess what it is? 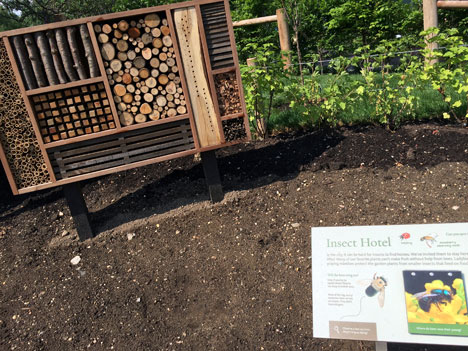 i just love it! maybe one day when david finishes the house, he’ll make one for our yard. this would actually be a great thing to have in our community garden . . . 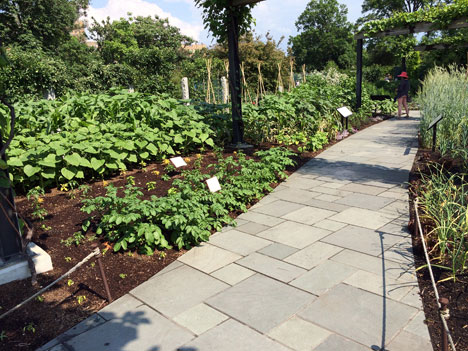 and just a little further on, my favorite part of the garden began—the herb garden and food-bearing plant display. this is a small demonstration space that has just about everything from scallions to sweet corn. it’s bigger than our garden at home, but similar—a little bit of space devoted to almost everything we like to eat. 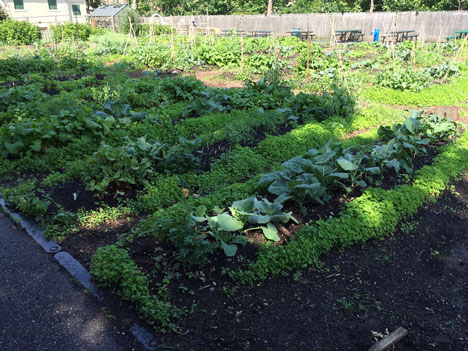 further on, i came to the much bigger children’s garden, where kids from ages 2 to 17 can plant their own crops and care for them through harvest under the guidance of garden instructors.

BBG also offers a gardening apprenticeship for teens that requires an application, interview, and acceptance process, where young adults can learn urban gardening. 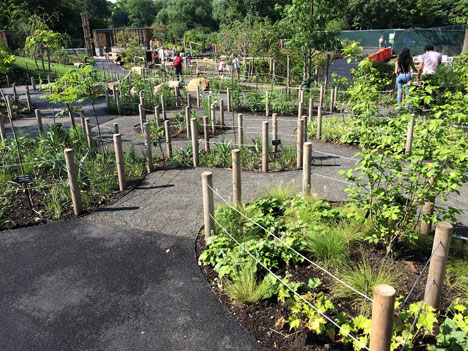 at the very back of the property is a discovery garden, with exploratory stations and plants sized for tiny tots, with easy access for strollers. 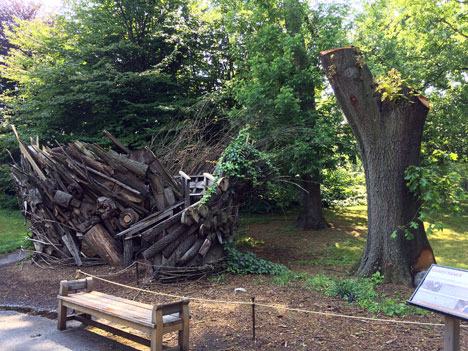 in order to turn myself back toward where is entered the grounds, i took a loop through the woods and came upon this fascinating structure. clearly the two are related, but how? 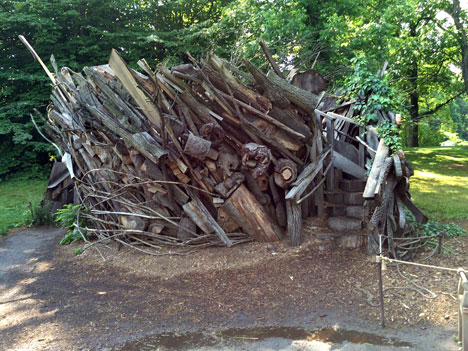 like many areas hit hard by hurricane sandy a few years ago, brooklyn was left with detritus to clean up.

moving the remains of huge trees is both dangerous and expensive in a city environment, so throughout NYC and its boroughs, creative solutions were employed to deal with the fallout. and with so many artists at hand, some really good results came out of that effort.

i took a little tour while i was there to admire the inside as well as the outside—so cool. 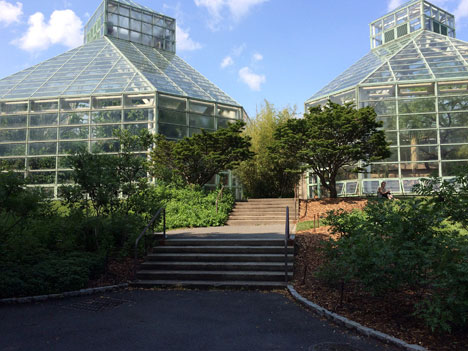 the walk back to the entrance took me past the big glass house and conservatory that runs along the washington avenue side of the property. not as big as the one at the NY botanic garden, but more intimate and easier to digest as a whole structure with the eyes. 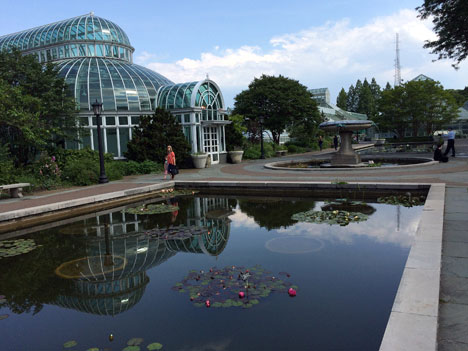 the courtyard in front is also gorgeous, distinguished by its central fountain and long lily ponds; another quiet haven in which to grab a bench for reading, eating lunch, or having a quiet conversation. 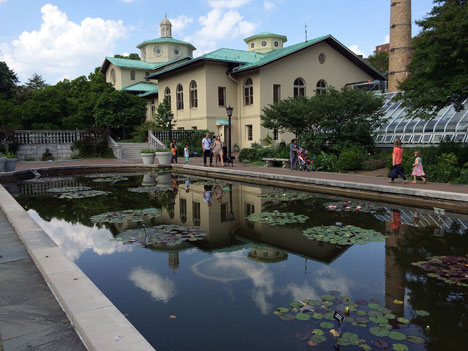 the courtyard leads to the administration and library building. i didn’t go in but one day, i’d like to. 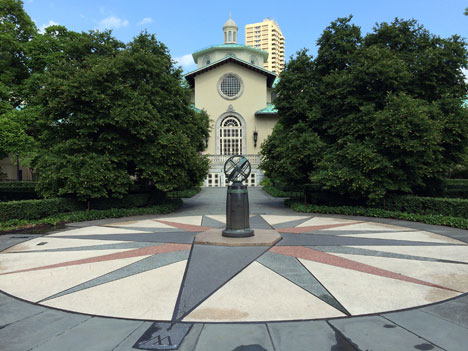 out front of that is the magnolia plaza, graced at the center with a sun dial/mandala/compass of inlaid stone. it is stunningly beautiful.

ok, i was on overload at this point and just relaying it all is making my head spin again. i’m realizing that botanic gardens are for me, like museums—doing a whole one in a day is a lot to digest. better to take them bit by bit.

i suppose this is my own fault—during all the years i had access to these world-class resources, i trained myself to make short, frequent visits of more intense looking. one of the things i loved about living in the city was the ability to do just that. 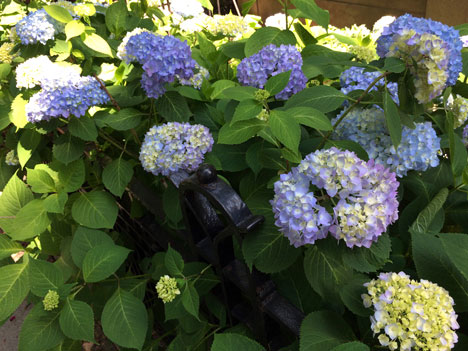 back out on the street i saw my first full hydrangea blooms of the year in a tiny brownstone garden—gorgeous.

on a quest to secure some ice cream (the day had grown awfully warm), i also saw an old favorite of mine and david’s 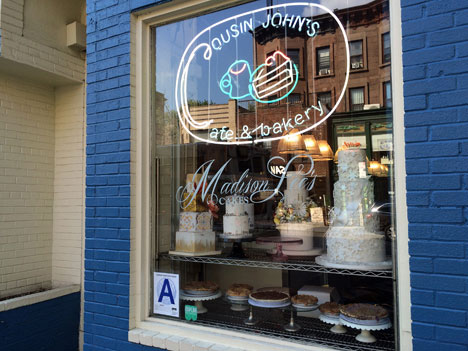 we used to stop after long bike rides to take home big slices of their amazing chocolate mousse cake—divine. boy those were the days, when i could downing of those without a second thought, heh.

speaking of the street, i need to get out and grab a few apples form the farmer’s market so i’m going to stop now; will be back in a couple of days with some knitting and more . . .

ps: will tell about the new yarn blend on tuesday. so far, only one person has come close.