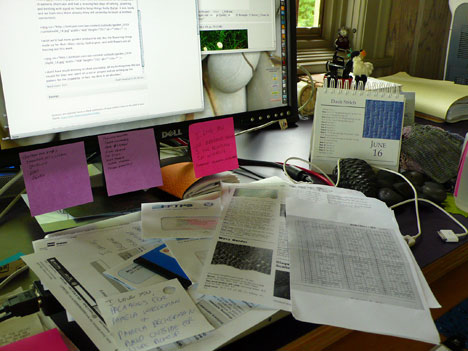 though i’ve spent a lot of time over the past few days getting on top of a bunch of patterns i needed to write, there has been some knitting and general wool activity in the house, too—i can only take so many hours of running numbers in my head before it breaks, heh.

i have several secret projects going and two of them have priority status this week, so most of my knitting time is devoted to getting those done and dusted. however, i still need some variety, so once in a while i take a break to put a few rounds onto the cheery rosebud baby blanket, because it always improves my mood. 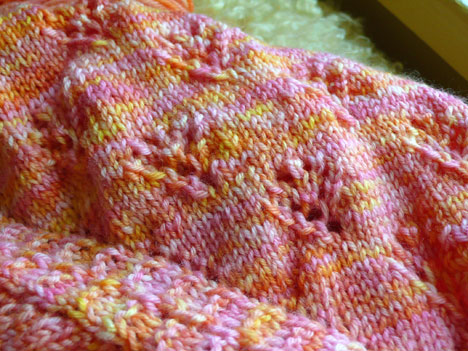 all those pink, yellow, and orange colors are the perfect pick-me-up, while completing the rosebuds one repeat at a time never fails to delight me
(i know you know what i mean). 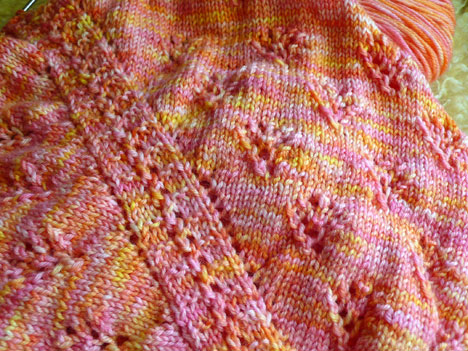 the yarn is perfect for a baby project—soft fearless fibers MCN luxury, a machine wash merino/cashmere/nylon yarn that is as practical as it is luscious. i’m knitting with the chastity colorway and karolyn will knit a sample in the meadow colorway as soon as i have the pattern ready for her (later this week i’ll be free to put that together, yay).

it feels like i haven’t invested a whole lotta time in this project for the past week; nevertheless, it appears to be growing. 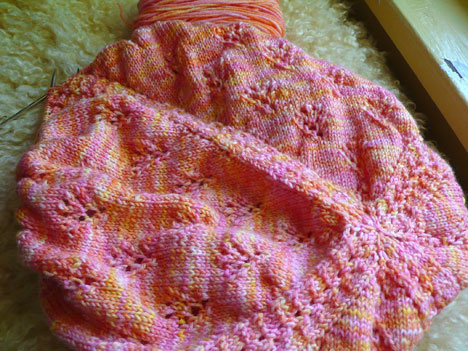 i’ve completed my first repeat of the larger roses and i’m almost finished with my first skein of yarn—it goes a looooong way, especially at the beginning of a square like this. soon, the project will begin eating yarn at a much faster rate, just like a real baby, haha. 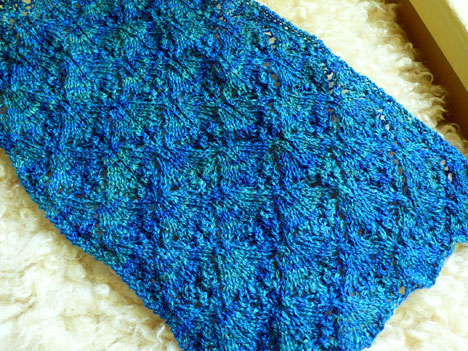 my scarf is growing, too—i took it along to a couple of appointments at the end of last week and knit in the car while david ran a few errands (it folds up plenty small enough to fit in my purse so i don’t look like a bag lady when i arrive at the chiropractor’s, haha). it’s about half finished. isn’t the yarn beautiful? it’s enchanted knoll farms 50/50 merino/silk laceweight in colorway queen mermaid (looks like there isn’t any in her shop right now, but hopefully, soon).

when i got back from my trips last week, there was one big task i wanted to take care of when i unpacked—something that i’ve been meaning to organize for months. i knew it would take some time, so i kept putting it off . . . and suddenly, i realized how stupid it was to continue doing that.

my personal closet has become completely overrun with finished knits—folded shawls and scarves took up precious space where linens and off-season blankets need to live. plus, i was starting to avoid wearing my favorites, for fear of disturbing the alarmingly tall piles of woolens in there—how ridiculous is that? and yet, i need everything to be within reach so i can put together the trunk shows i take with me in my travels.

when david renovated the back half of my work room last winter, he put in a big new cedar closet for storing fiber and installed a narrow dresser in there, which i could use for organizing finished work.

then he filled it with miscellaneous bags of fiber which i now needed to move in order to actually use it.

this is the task i was avoiding . . . but i was determined after this last trip to tackle it, so i cleared those drawers, unpacked my bag 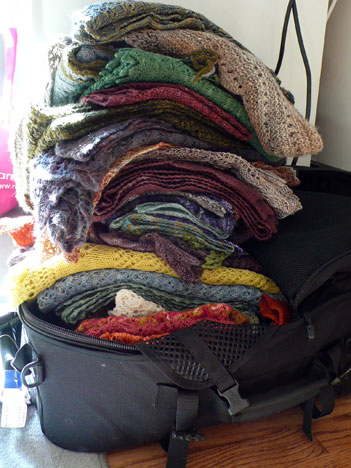 and brought in all the samples from my bedroom closet. i found new homes for the bags of fiber (who am i kidding? you and i both know it’s all just a big rotation process: A) spin the wool and put it in the yarn closet; B) condense other fiber into the empty space left by that wool; C) install handknits where the fiber used to be—you know the drill). 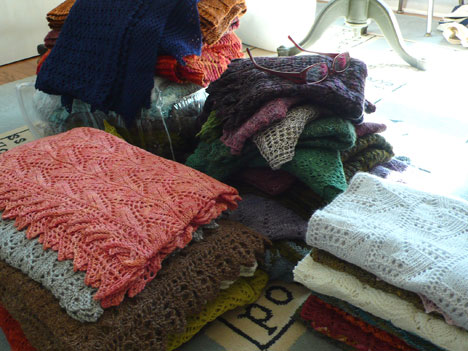 anyway . . . i sorted everything into piles according to type—scarves, accessories, triangles, rectangles, faroese. i plucked a few favorites for personal use and put those back in my closet. i’m a person who sticks mostly to old favorites or things made of special yarn i consider precious in some way, like handspun or gifted yarn. 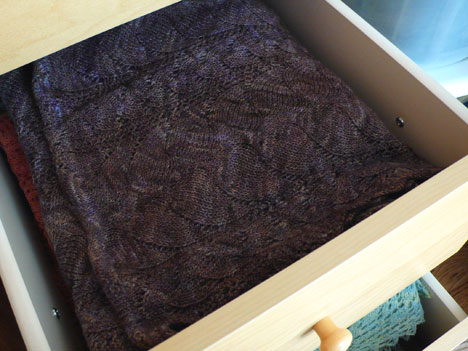 then i tucked them into the dresser drawers accordingly 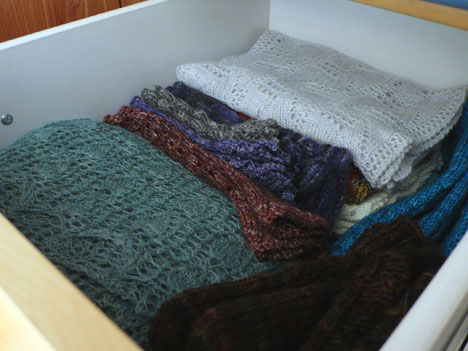 where i’ll be able to find things easily, without wrinkling or having to refold what i don’t need for any given trip.

(one of these days, i need to do a big washing and reblocking of them, but i shudder to think what that would entail . . .)

and here’s proof that i’m getting a little smarter with age—i even left one drawer empty for future finished objects. eventually i will have to rotate again, but not for a while . . .

i felt completely virtuous after completing this job—for all of five minutes. i’ve just gotten back another big box of old samples from a LYS that i’ll need to sort and find homes for (but hopefully, i can actually get rid of some of those). for now, i’m thinking on it.

here’s something funny that happened at TNNA, but i have to back up a bit to sock camp in april to tell it.
remember the suessian creatures we made at camp?

while not exactly attached to my purple back hatch-a-batch in any lasting way, i still couldn’t bear to toss it out at the end of camp. i was in a real quandary about what to do with it (i was determined NOT to take it on the plane—i have enough stuff to circle around at home).

sooo—and please don’t judge me for this—i left it on a nice bench outside a yarn shop in seattle, thinking that some small child might find it a fun reward for being good while mommy shopped. 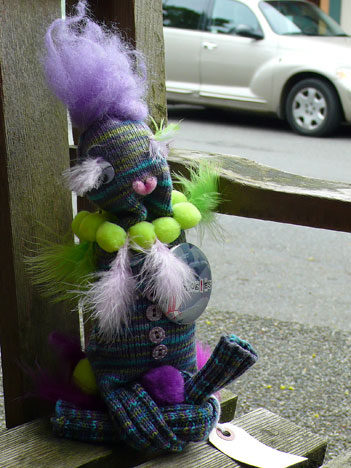 later, someone wrote and told me that indeed it was found and brought into the shop. yay.
then at TNNA, i ran into a group of shop employees and one of them told me the creature was in residence there for a bit and has since moved on to what i think is maybe an antique shop? (sorry, the details escape me now) 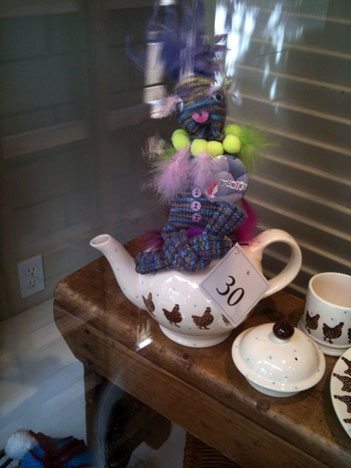 after discussing it a bit, we decided that yes, every once in a while it should be placed back out where some interested person will pick it up and take it on to its next perch. in this way it will migrate as all birdish creatures ought to.

but there were added treasures (as if yarn for three sweaters isn’t enough!)—jen also included a few sample skeins of yarns we didn’t talk about in her booth at maryland (blame it on the heat and wool fumes). 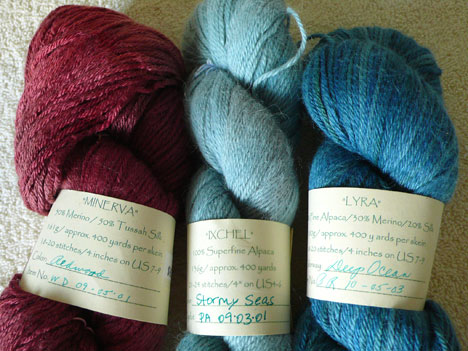 that’s it—she just has too many gorgeous yarns.
i’m not thinking of heavier knitting projects at the moment, but these weightier yarns will be lovely for fall knitting, so it’s good to have them on hand when the mood strikes me to get started on something for september.

ok, now, it’s time for me to get back to work on my patterns. it’s raining, so there won’t be any bike riding outdoors, but it would be good to do some yoga and weights today. if i get done early enough, i can finish one of the secret projects. and THEN, i’ll treat myself to knitting whatever i want when i go to knit at debby’s this evening, haha. 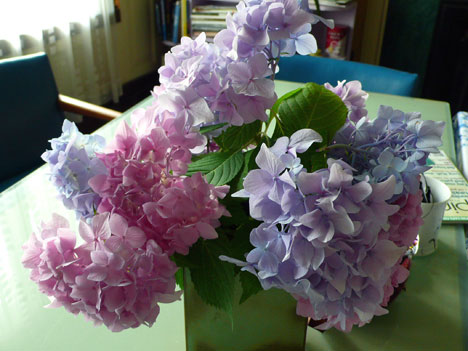 26 thoughts on “putting things away”