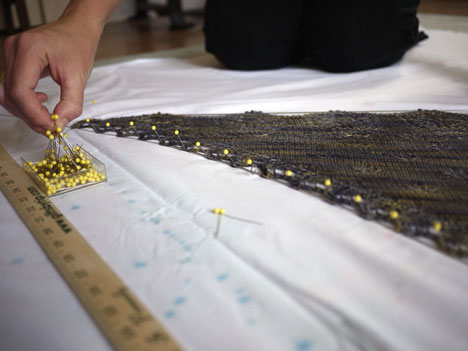 on wednesday, david made his blocking film and he’s editing it now; it was lots of fun to do and he’s planning to have it ready for the pattern release when i get back from london (pattern is with the test knitters and proofreader now; we should be ready to roll it out a day or so after i return). 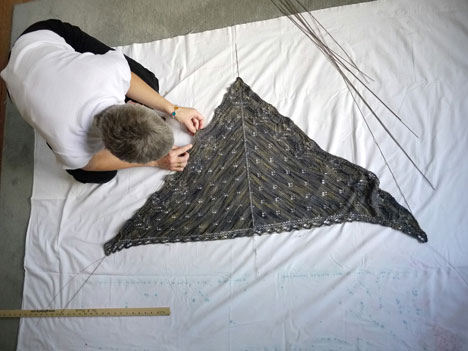 in the meantime, i have finished blocking shots to kick off the weekend

i’ll admit now that i was a little worried about whether i would really like luciole, when it was done—i just thought maybe it was a bit too literally buggy, you know? 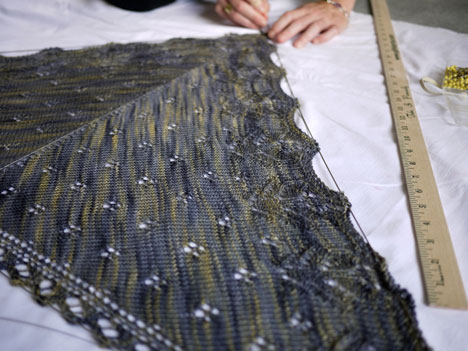 but i’m relieved to say emphatically that i do love it, because i adored working with the spirit trail merino/silk penelope yarn (colorway, falcon’s eye) and had so much fun knitting and designing it (and talking it over with everyone here, haha). it’d be a shame if i felt ambivalent after it was done. 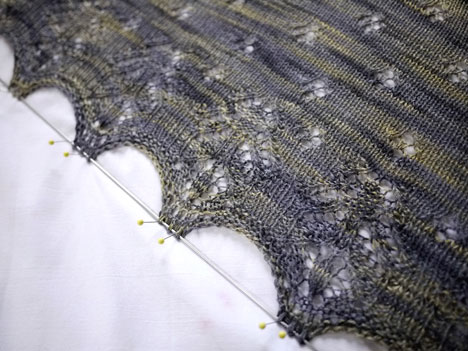 but i don’t—it’s wonderful and mysterious. the shapes in the hem, a scattering of stars over the body, and movement of the colors across the fabric is fantastic, conveying perfectly the feeling of darkest night, lit up by flashing fireflies 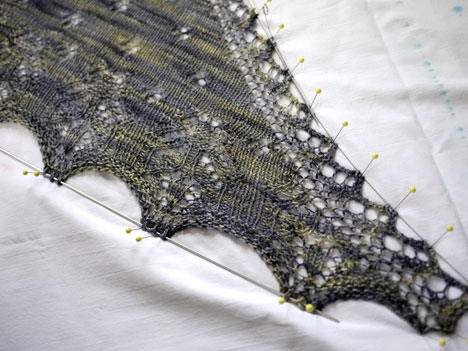 and that open, lacy edging makes a pretty row of wings along the top to complete the picture. 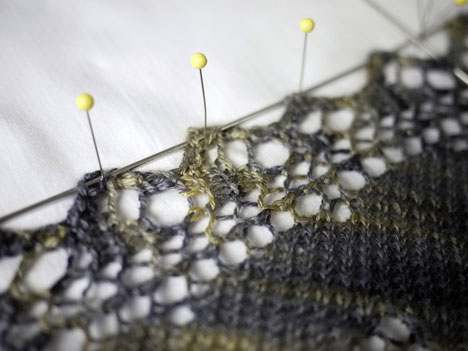 the point is always a bit of a surprise when i block it out—i’m never quite sure what it’s going to look like, with its mitered pattern, and this time, it’s extra special, sort of a conjoined insect form that looks like the queen of all fireflies. 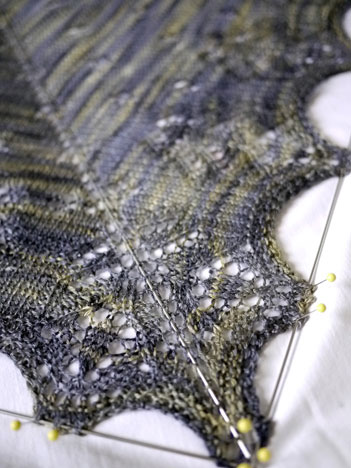 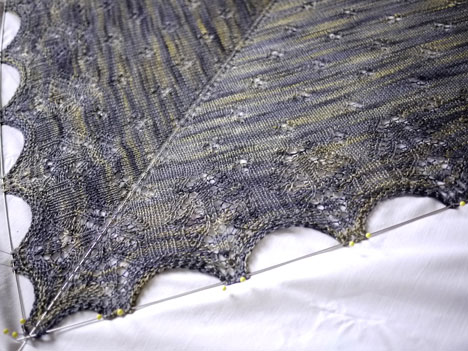 the whole hem is actually quite surprising for me. even though i swatched it several times, imagining the effect of a bunch of them in my mind, there’s no substitute for seeing the real-life aggregation of multiple repeating motifs like this. 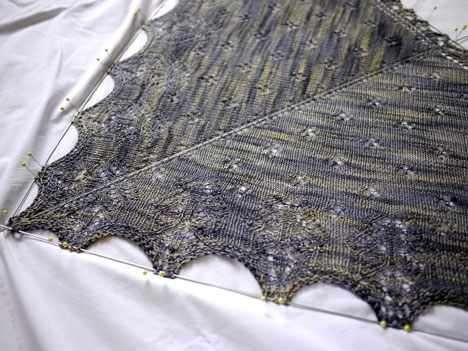 it’s actually very dramatic, the sculpted effect amplified by the sheen of bombyx silk to the point where the yarn appears as polished metal in places. 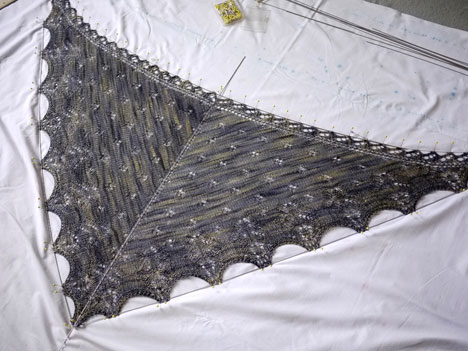 of course, in another colorway, like oranges or pale blues, it will be completely different—all citrus and sunshine or ghostly ethereal. and i like either interpretation very much as well.

so yesterday i unpinned it in the morning and took some nice shots on the mannequin.
my initial reaction was confirmed—i like it even more on the figure. 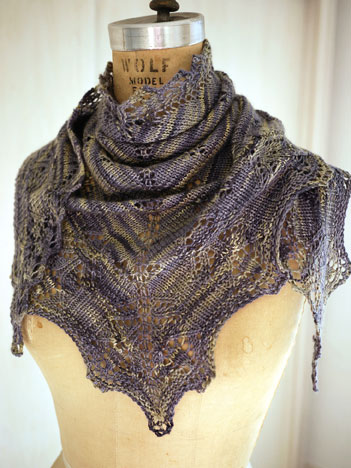 just look at the way those colors move with the undulations in the patterns, without in any way obscuring the stitches or overpowering the lace. 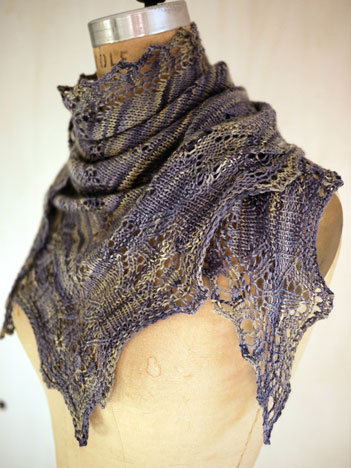 and lacy it is, too—lovely shafts of light fall through the edgings and around the scallops to show off all the pretty holes and curves. 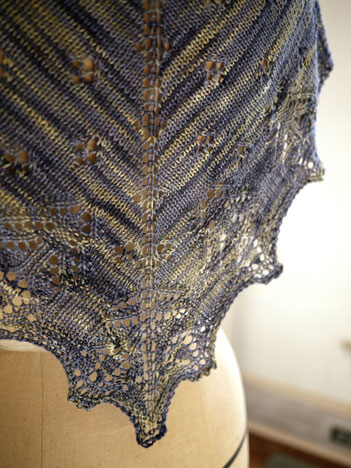 the details stand out, but they don’t say “I’M A BUG SHAWL” 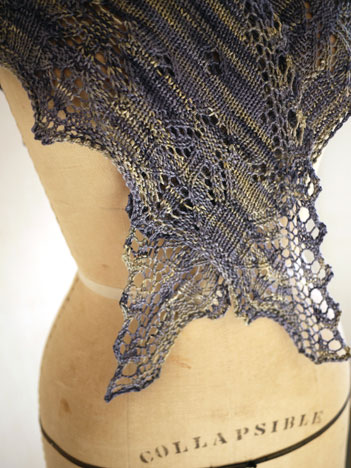 one note: this was my prototype and i wanted to use the yarn to its very limit, so i added a few rows of garter and eyelet at the far edge. but i took those out when i wrote the pattern to allow for some wiggle room (i like to keep the yardage requirement within 25-50 yards of the skein’s limit). 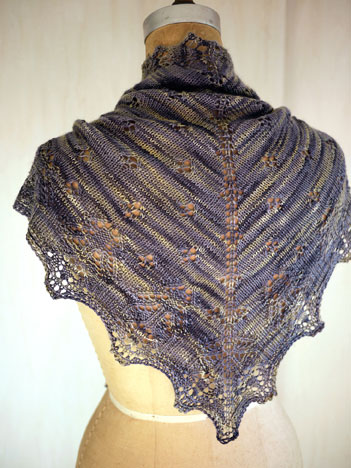 i’ve been on a bit of an mission this year to explore the very victorian idea of wearing one’s interests on one’s sleeve by incorporating examples of a favorite obssession in one’s clothing and home decor, sometimes in an almost shameless over-the-top scale. 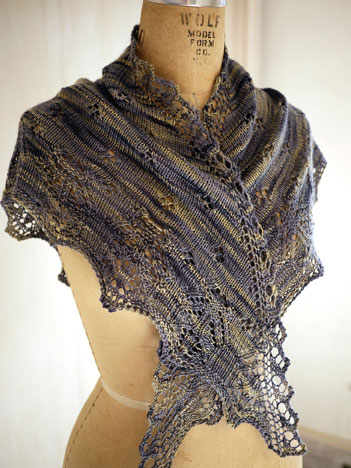 they were very fond of hats covered in fruits, fauna, flowers, feathers, and insects, printed fabrics and wallpaper depicting all manner of plant life, and household objects that followed suit. 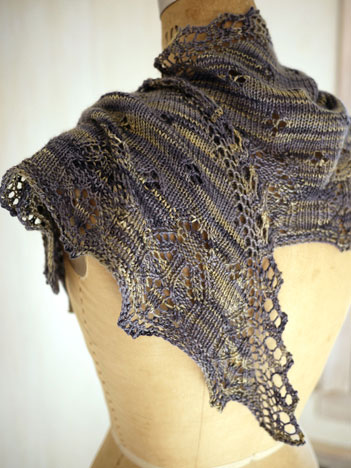 i love the idea of pushing the limits of what we can accept as truly and universally pretty, while still keeping it on this side of being limited to a theme.

anyway, i hope you like it as much as i do—an orangey one is underway as well and will be in my travel bag when i leave for london on monday.

i’ll have at least one more post before i go and i’ll “bank another couple for david to put up in my absence (if he adds his own comments, so much the better!). and i’ll try as hard as i can to blog from the road—we finally got my iPad set up for blogging, but i’m not sure yet what sort of internet access i’ll have. 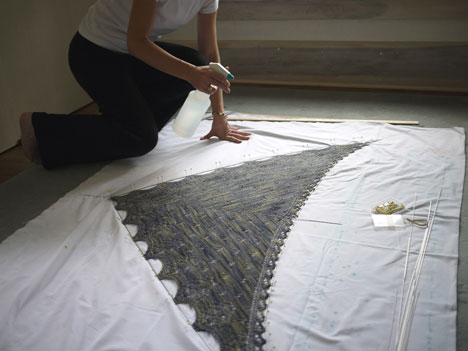 happy weekend—see you next time