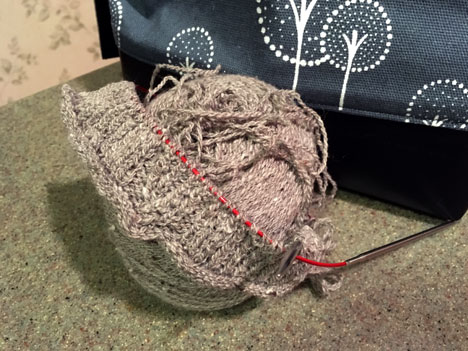 hello, did you wonder where i had disappeared to? it’s been a month filled with travel and just a few days at home so far—i hardly recognize dear david after being away so much! 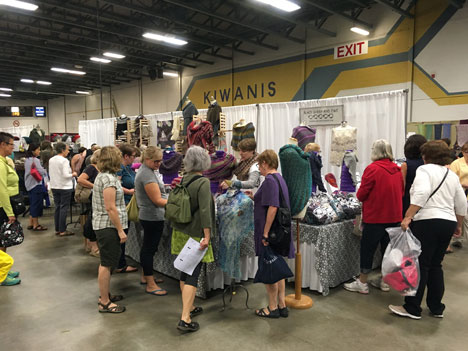 almost as soon as we got back from visiting my family over labor day, i took off again for waterloo, ON to speak at knitter’s fair and teach at shall we knit? on the way i knit on the last piece of my dock and cabin sweater—the remaining sleeve—which i had started on my last day in albany, but hadn’t worked on much in the days i was at home that week. 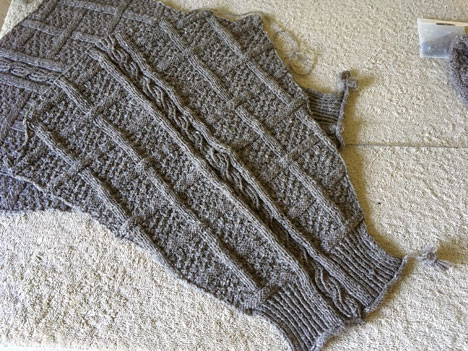 by the time i got off the plane i was just a few rows away from binding off and would finish it up that night, once i was settled in my room after dinner. woo-HOO; this sweater is big and somewhat slow going (for me), having been interrupted numerous times in all sorts of ways. i am thrilled to have the pieces done and ready to begin seaming (more on that later).

i was last at knitter’s fair about five years ago and the event, now in a new venue and with more participants, has grown even better than it was back then. this is an indoor retail show—no animals—with shops and indie producers making up the vendor list. 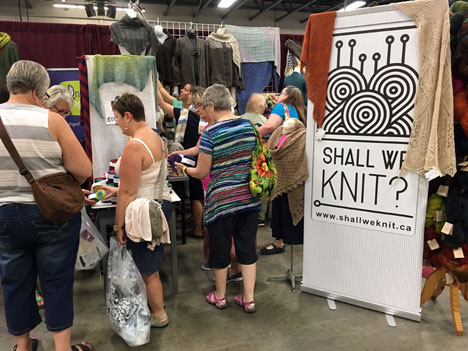 the shall we knit? booth was packed with yarny goodness and even had a feature corner for our bare naked wools yarns, some of which which karen carries in her shop.

for the fair, she brought in a trunk show of additional yarns that she doesn’t normally have on hand and showed them alongside some beautiful sample knits (i especially love that caïssa sweater in stone soup DK, clasped with a jūl closure (upper right of photo); i might need one of those myself.

i think the doors opened at 9 am or so and by the time i got there at 11, the aisles and booths were thronged with fiber enthusiasts. i was to give a talk at 1 pm, but needed to do some yarn research for the lace scarf book, so i took a walk around the floor to see who was there and i found plenty of familiar faces. 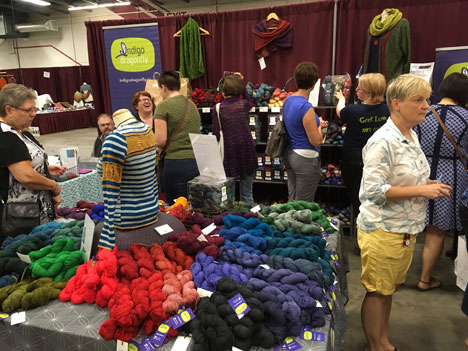 like our friend kim of indigodragonfly with her gorgeous skeins of hand-dyed yarn, yum . . . i may have found a skein there that i couldn’t leave behind . . . 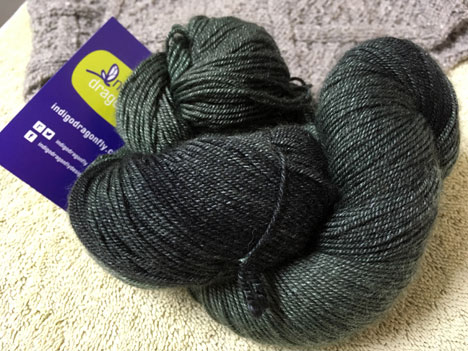 it’s chameleon sock; i couldn’t resist this iridescent, muddy gray/green/black with the color name we are all just living in idris elba‘s world (wow, you got that color name so right) everyone on hand agreed that i should not, could not leave it behind—it is SO me. kim knows me too, too well, right down to the fact that i’m a luther fan. that skein was lying in wait for me . . . 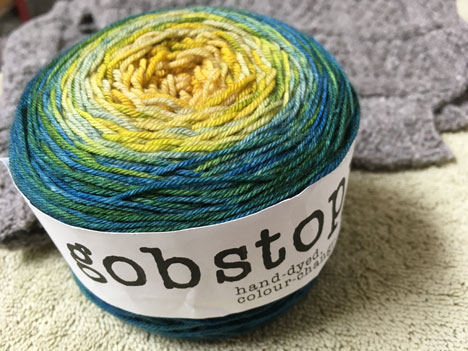 and then quite, quite unintentionally, probably because my wallet was already open and it was so close by, i also grabbed up a gobstopper just because. just because i love it to bits, that is, with its wheat and corn colored center, rimmed with perfect blue greens—a quintessential autumn palette of non-autumnal colors; exactly what i wanted without knowing it. 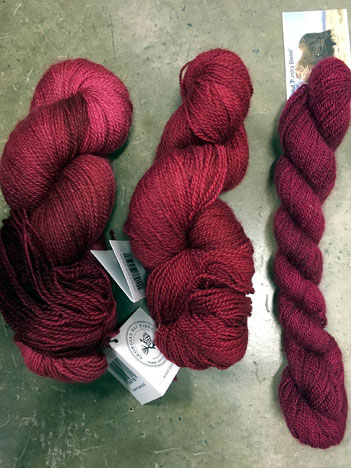 what i was really supposed to be doing was looking for a red yarn for the lace scarf book. oh and i found a few. the two on the left are from georgian bay fibre co; they have the softest ever BFL yarn. i am dying to make something with one of these skeins soon, just so i can wash it and feel it’s flannelly bloom afterward. and the skein on the far right is a quiviut/angora blend; i can’t remember the vendor’s name just this second but it’s delish and on its way to a sample knitter to become a scarf. 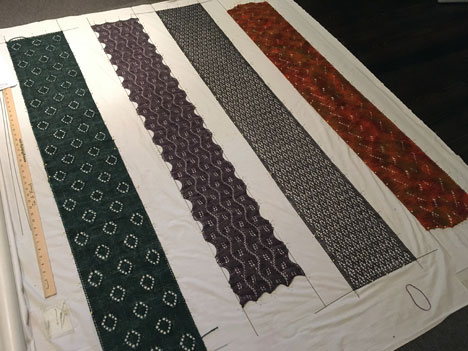 before leaving home, i had washed and blocked the scarf samples that had not been previously stretched. i was only home for three days that week, so i did two batches on two different evenings and got them all squared away. all i needed was to decide on the last skein of yarn and i thought a red would fit the bill. 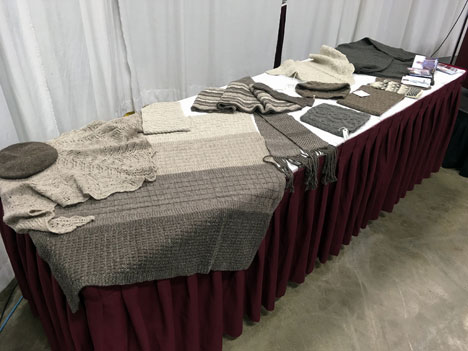 with those shopping errands complete and several red options under my arm, i headed for the speakers area to set up my trunk show and get ready for my talk. 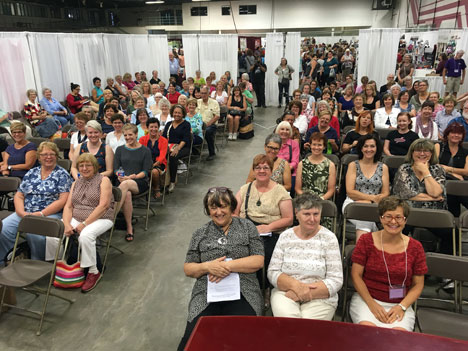 i was a little nervous, but as the seats filled up and i saw the high percentage of smiley, welcoming faces, i relaxed and enjoyed the event. as with every other visit i’ve made to the kitchener-waterloo area and talks with their guild members, this one was a delight. thank you to everyone who took time away from an exciting shopping day to sit and listen to me! 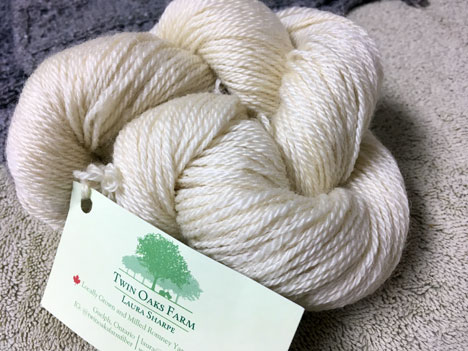 after the talk i took one more spin around the show to let the adrenaline drain away and this time, i found a tiny booth with some seriously gorgeous romney wool yarn that i could not keep my hands off of. look at the gleam on this skein! i don’t even know what i’ll make with it, but i can’t wait to find out, haha.

the next day was filled with classes at shall we knit?. first, yarn voyage in the morning, which is always such a treat to teach. i think most times, the students love it too; there is so much to know about everyone’s favorite subject—yarn! 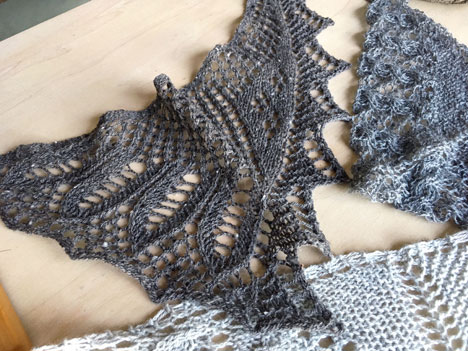 then in the afternoon, we had a shawl project class for edmonia. a more relaxing and low key class, we worked our way through the pattern for a tiny doll-sized version of the piece, practicing all the stitch patterns and construction techniques. another good day—but i was so engrossed in my work all day that i never took a photo, not even of karen’s adorable destination shop. sorry . . .

the next day i was heading home; i had a lot to do in the few days i would be there before my next trip the following friday. i love my stack of finished pieces; so satisfying! 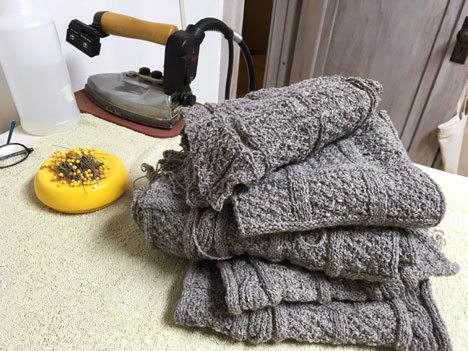 at home, my main priority was finalizing the september pairings club chapter (spoiler alert in that link!), but one evening i took a little break to block the two front pieces so i could graft the little yoke that runs around to the back.

once joined, i was now able to pick up all around the front edges for the button bands and neck finish. before i started though, i checked to make sure that the yoke would fit into the back piece, once it was blocked. 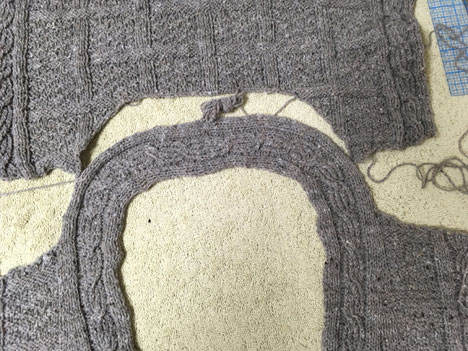 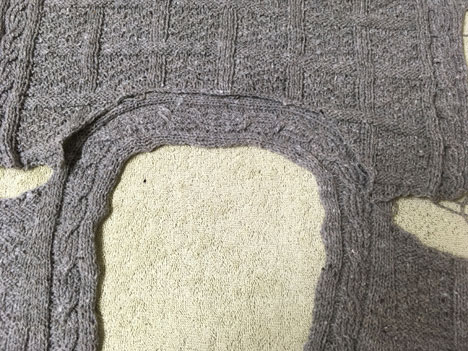 the geometry (? not sure if that’s the right word) was a bit of guesswork, but it looks like once the back is blocked it will fit correctly. 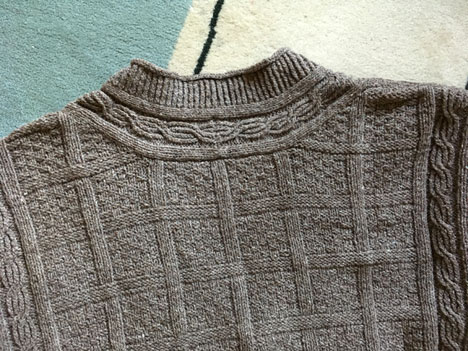 for reference, this is what the original looks like in back.

i have the old inspiration garment spread out on my workroom floor because i find myself continuously checking details as i near completion. 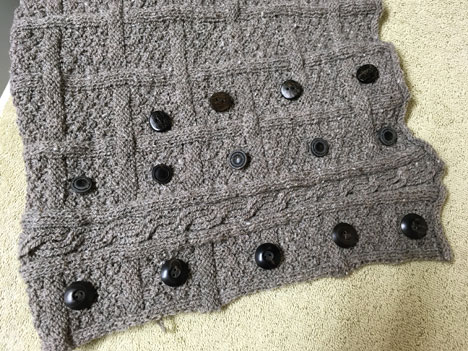 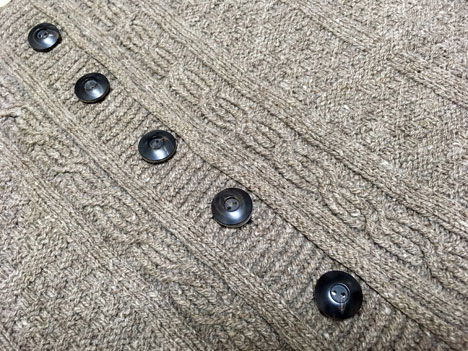 the old sweater has one-inch buttons like these (from our shop) but when i lay them out on the fabric, they seem more dominant than i would like in the dark color. 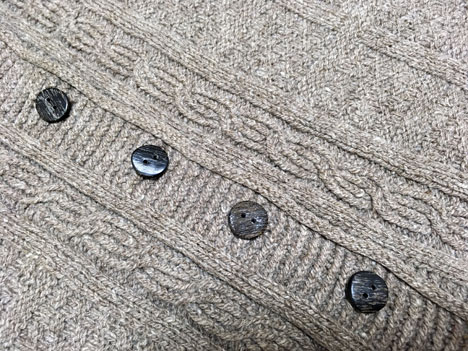 these buffalo horn ones are nice; little smaller, streaked with shading, and textured, they are certainly in keeping with the yarn. 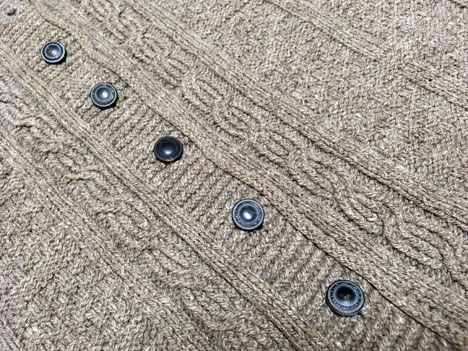 but then i also have these, which i purchased at churchmouse yarns some years ago during a teaching trip. they have a buffed surface with some vintage style cutwork and a shank at the back. i’ve been trying to find the right project for them for some time because i just love the look.

after consulting with mister style (that would be david) he agreed that these are the ones. the nice thing about using these buttons is that i can work a simple eyelet buttonhole to fit them, which is my preference; the larger ones would require a one-row button “slot”. not difficult to work but sometimes hard to get the right fit and i was running out of patience for this part of the project, haha. 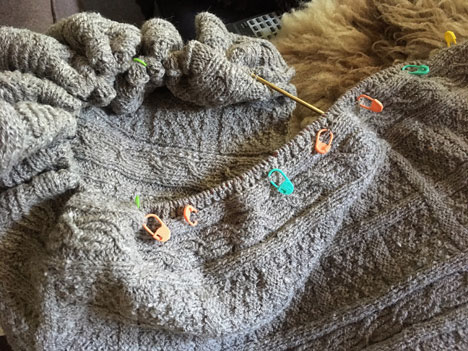 so, i am now happily working through the neck and button bands; after a false start where i hadn’t picked up enough stitches (the bands were puckering), i think i’ve got the right proportion now. the rows are very long and worked in twisted rib, so it’s a little slow going, but i’m making progress and have completed the buttonhole row. 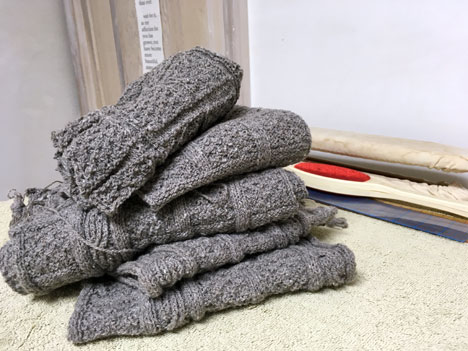 today i will block the back and sleeves to be ready for the final seaming steps, hopefully later tonight. soon you will see a finished cardigan.

in the meantime, i’ll be working along on the project i started while still in waterloo—had to keep moving through my queue. this one is going a LOT faster than the previous two sweaters; so fast that i can hardly believe it. more on that next time, along with photos and news of further travels.

now, i must attend to that blocking i mentioned.

10 thoughts on “an event-full month”