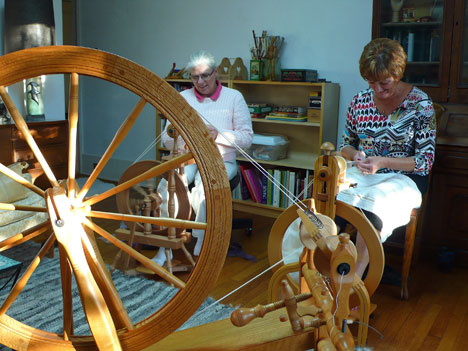 this week, we had spinning class on thursday night instead of today to accommodate susan’s work schedule. we decided to try out my new study, since i wanted to spin on my big norm hall wheel, which is rather awkward to cart up and down our steep stairs. 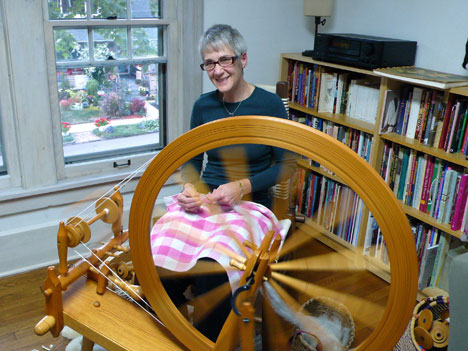 the whole thing was so much fun and the room so pleasant to work in that we’ll almost certainly to make it a permanent change. there isn’t enough room for a bigger group, but i think at the current headcount, things work well for spinning. and the light up there . . . well. (it was sunset and the windows face westward through the treetops—need i say more?) 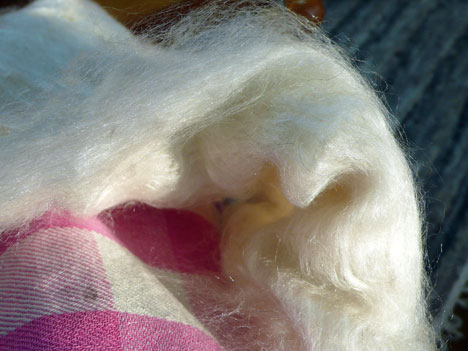 i took out this beautiful hand carded batt of silvery silk/merino/cashmere and possum that was a gift from tabi at serecin silkworks. i had the complete pleasure of meeting and getting to know tabi during my wonderful trip to waterloo, ontario in june and have been patiently (but eagerly) awaiting the day i could dive into it. 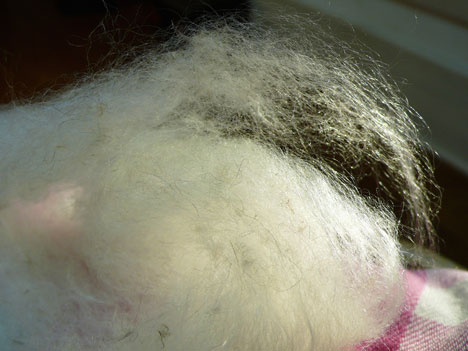 i love that the fiber is not pure white, but a blend of whites, with some gray and fawn colored fiber in it, too, which gives it some texture and interest for spinning. the fiber is smooth to draft and very evenly carded, so the short and long fibers carry each other nicely—i didn’t have to keep adjusting my drafting fingers to accommodate runs of one or the other.

i’m spinning a very fine singles to make a 2-ply lace yarn. obviously, it’ll be while before this batch is all spun up; i have two batts and after a couple hours of spinning, just three or four “bumps” on my bobbin (granted, there was a lot of chatter in those two hours as well).

what i should really do, is get out some of the white cormo i have in my stash and start spinning a super-bulky yarn for david’s christmas sweater on my schacht wheel. (i’m thinking that this year i could knit the sweater he asked for last year (but he asked way too late for me to spin the yarn and knit it). it would be wise to start now, but will i do it?

speaking of my schacht wheel, now that it’s empty for the moment, barb had a chance to try it out; she’s thinking of buying one, but has been hesitating (we all told her to just do it; she’s such a good spinner, she should have a great wheel). but she had to see for herself. 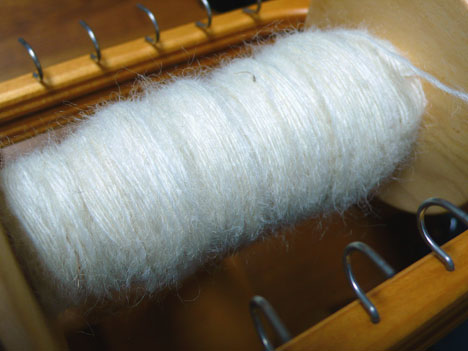 she brought over this batch of sock fiber that we had custom blended last year at wooly knob fiber mill. we all got together and bought this dazzling grand prize coopworth fleece at the wooster fiber show, then had it processed and blended with some nylon fiber into a sock blend. each of us ended up with about a pound of spinning fiber, enough for a couple pair of socks. we all love the idea of handspun sock yarn but we wanted to see if adding the nylon will make them wear better.

seeing her spin it up reminded me of another project i intended to get done by late november and haven’t started yet. i always give david a stack of socks for our anniversary and this year being our tenth, i wanted to knit up something special—such as handspun coopworth socks. heh.
i better bust a move if i’m going to make it.
oh yeah, and i better locate my sock mojo, wherever that might be.

after those guys left for the evening (BTW, barb is definitely getting a new wheel, hehe), i settled into getting some knitting done.
wait, let me back up a bit—on thursday afternoon, i finished up my leafprints shawlette and put it on to soak. it threaded up on the wires in no time and was soon stretched and drying. 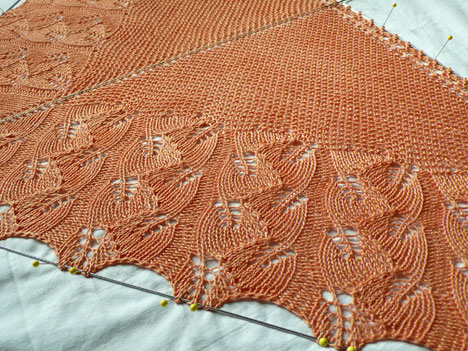 i’m so much more pleased with it than i expected to be—as i knit it, i kept thinking this was WAY too easy a project to be truly beautiful. but i adore the shadowing produced by the stitch pattern as it moves back and forth down the hem. it makes a beautiful brocade effect which, for some, reason, elevates the experience of looking at it. 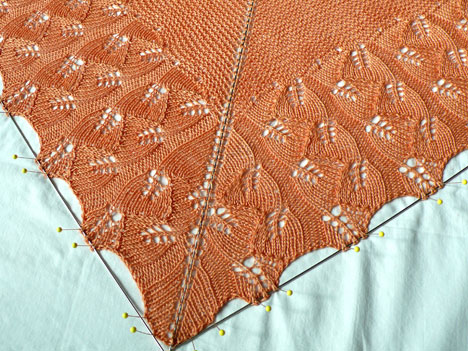 and i love, LOVE the points at the ends and center back—before blocking, i was concerned that the asymmetry there would look clunky instead of interesting, but it turns out to be my favorite part, beautifully organic. 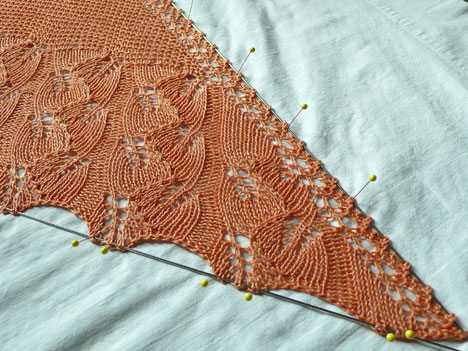 in fact the whole hem has such precise, exquisite texture—it’s hard to believe it wasn’t produced by nature. i think of all the shawls i’ve knit, this one reminds me most of an actual butterfly—both the shape and the way their wings have that sharply-defined veining along the borders. 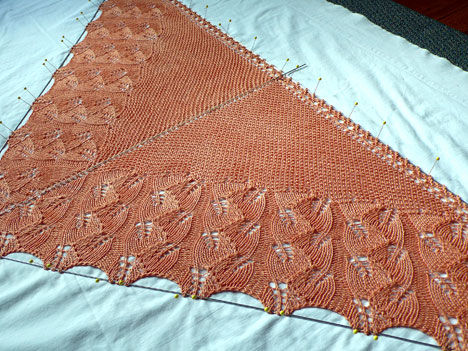 and of course it goes without saying that the yarn—kollage creamy—goes a long way to enhancing the effect. i’ve been drooling over it as i knit and praising it all along, but the real test comes when you block it—it’s not wool, after all; what would it be like once it’s been wet? would it stiffen up and be unpleasant? or go limp, shapeless, and lifeless? and what does milk do when washed? 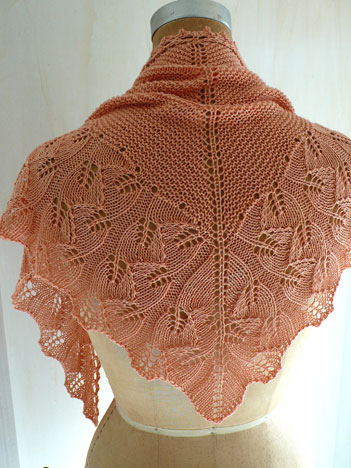 turns out, there’s absolutely nothing to fear there—it just gets better and better with each step of the process. feast your eyes on those beautiful scallops and that stitch definition 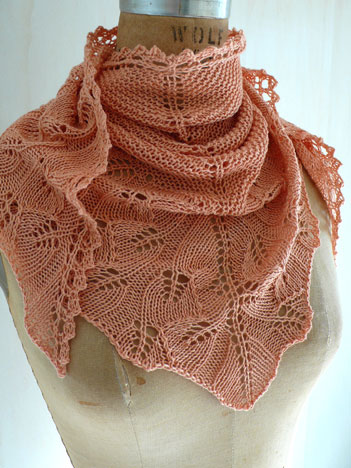 i will totally be knitting with this yarn again. 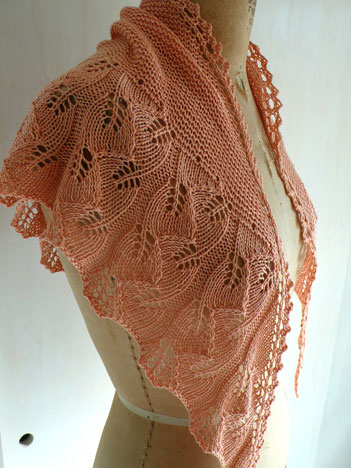 this pattern will be published by kollage in their spring collection and will not be available in my shop, but we’ll be sure to let you know where you can find one—(i’m hoping they will make it available by download). 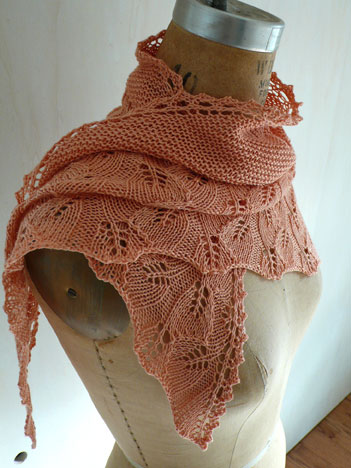 ok, i’m smitten with it so i’m going to show a couple more photos because i can’t help myself 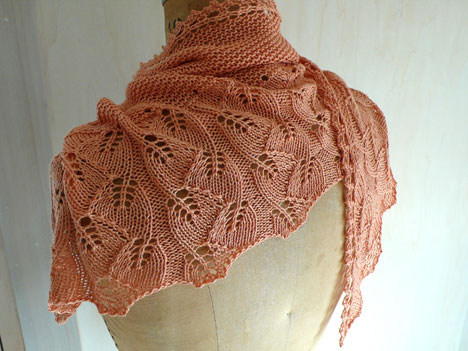 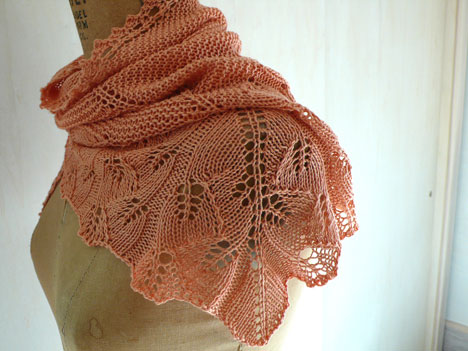 there has been other knitting too—once the shawlette was off the needles, i wasn’t going to take a break or anything—i have catching up to do. 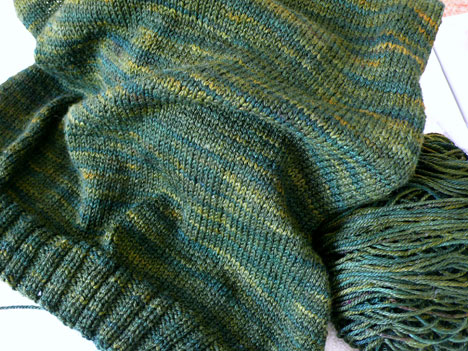 i finished up the back of my bel air sweater last night, but i was too tired to block it (i’ve spent horrifying number of hours at the computer this weekend, editing photos). i’m looking forward to doing that today, so i can put the shoulders together and get the collar on. after that i just need to sew in the sleeves and side seams and it’s done. woo-hoo, a new fall sweater. i do need to decide on buttons and admittedly, i’ve been putting it off or forgetting and now, i wish i hadn’t. i may have to order something, which means waiting. i didn’t plan this part very well . . .

with just the sweater on the needles and a small secret project going, i turned my attention last night to deciding on an accessory for the little helebores beret. after thinking over all my choices and visualizing how each one would look, i settled on the wristlets. i’ve never offered wristlets and i think it will be a fresh addition to the shop. i could really picture what i wanted—a frill of lace sticking out from the sleeve of a coat or draping prettily over the wrist. 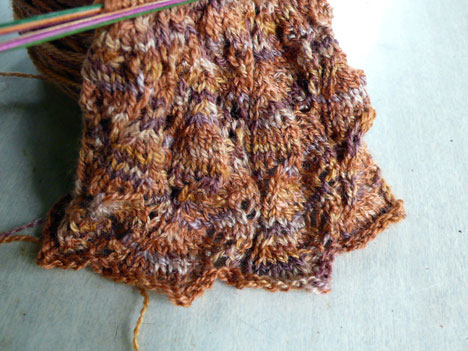 plus, they are turning out so well—just what i had in mind, so far.
i love the points at the bottom. 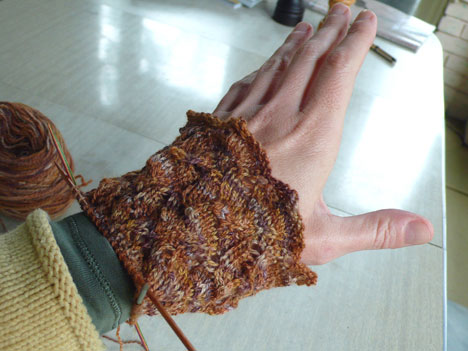 i know that to you, they don’t look anything now like they will once they’re blocked, but i can picture them. if i have enough yarn, i might add a little “hand” inside the cuff to keep them in place, but i dunno if i’ll have enough (i do want the set to be a one-skein project). 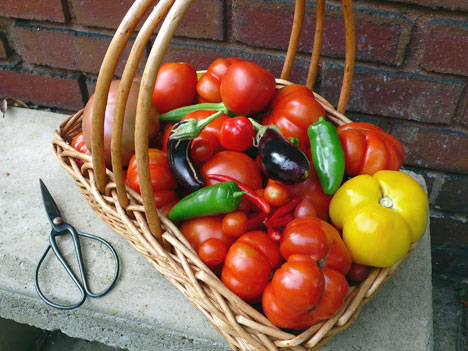 the tomato plants that were on a break last week are suddenly offering up a big basket of ripe beauties every day or two—so i see cooking in my immediate future. plus, i never got my bookkeeping done yesterday, so that is another item i have to take care of.

i’ll end here with a couple of sweet pieces of mail we got yesterday. first a card from our little buddy in las vegas—amad had his sixth birthday in july and just started first grade—looks like he’s all psyched up over the writing thing. 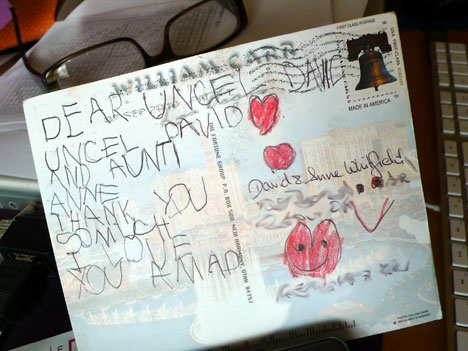 i think it’s REALLY nice when we get thank you notes from the kids; i always appreciate that their parents take the time to teach this skill. i save every one.

and then from miss babs, a beautiful skein of her yasmin merino/silk lace yarn 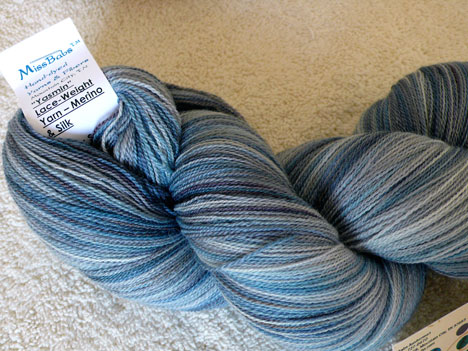 this one is part of her “day at” series—an ongoing style that is generally one of a kind colorways. this colorway is called A Day at™ the HMS Squirrel Shipwreck. babs says that most of the shipwreck colorways have been blue based. Really very fun and will create a random knit.

ok, that’s it for today—see you next time.

30 thoughts on “taking the new room for a spin”