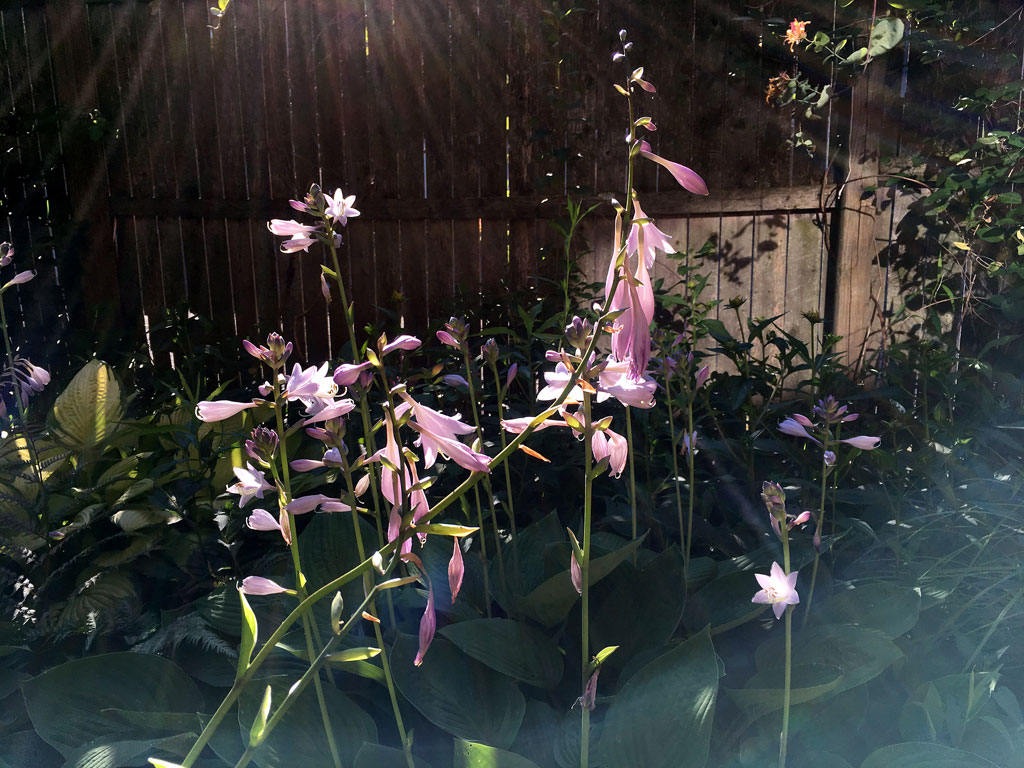 those of you who’ve been following this blog for years and years are quite familiar with my ongoing investigations of our yard, as well as our evolution as gardeners.

i’m always touched by how many readers ask about our garden; while i try not to be repetitive in sharing it, gardening is a discipline where regularity—at least of the right things—is required for success. believe me, we’ve tried a more spontaneous method and ended up with, well, spontaneous results, to put it as nicely as possible . . . 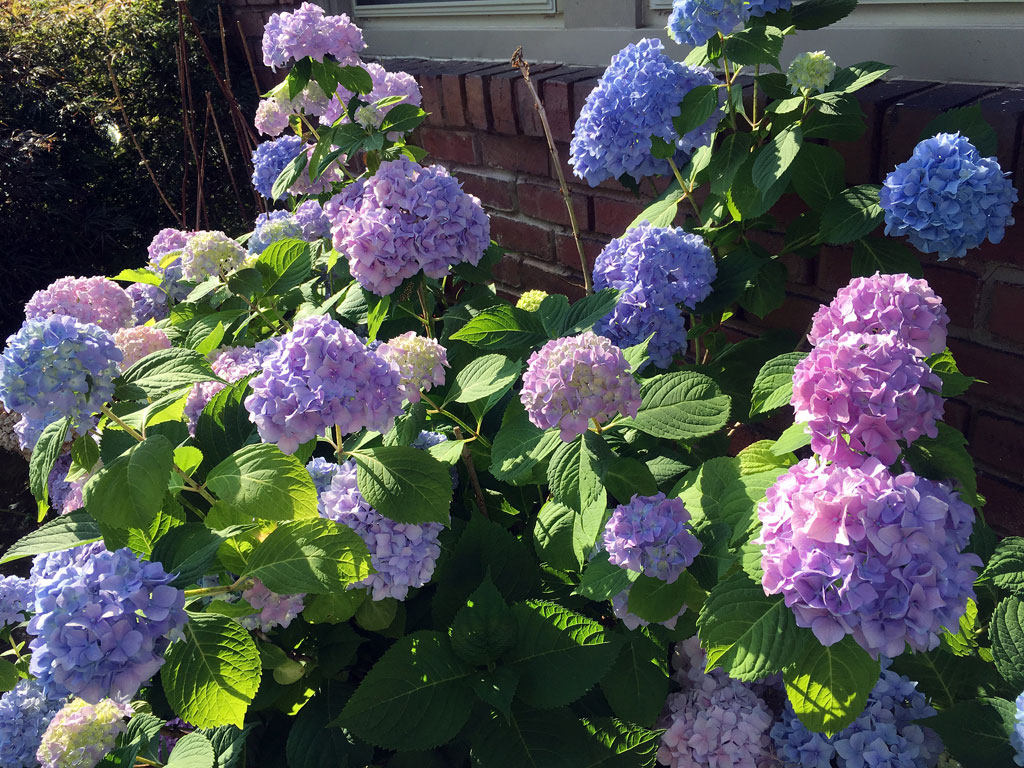 this year has been funny in some ways, especially during the spring. our flowers have been mostly spectacular, from the tulips through these gorgeous hydrangeas, though our daffodils were almost nonexistent. 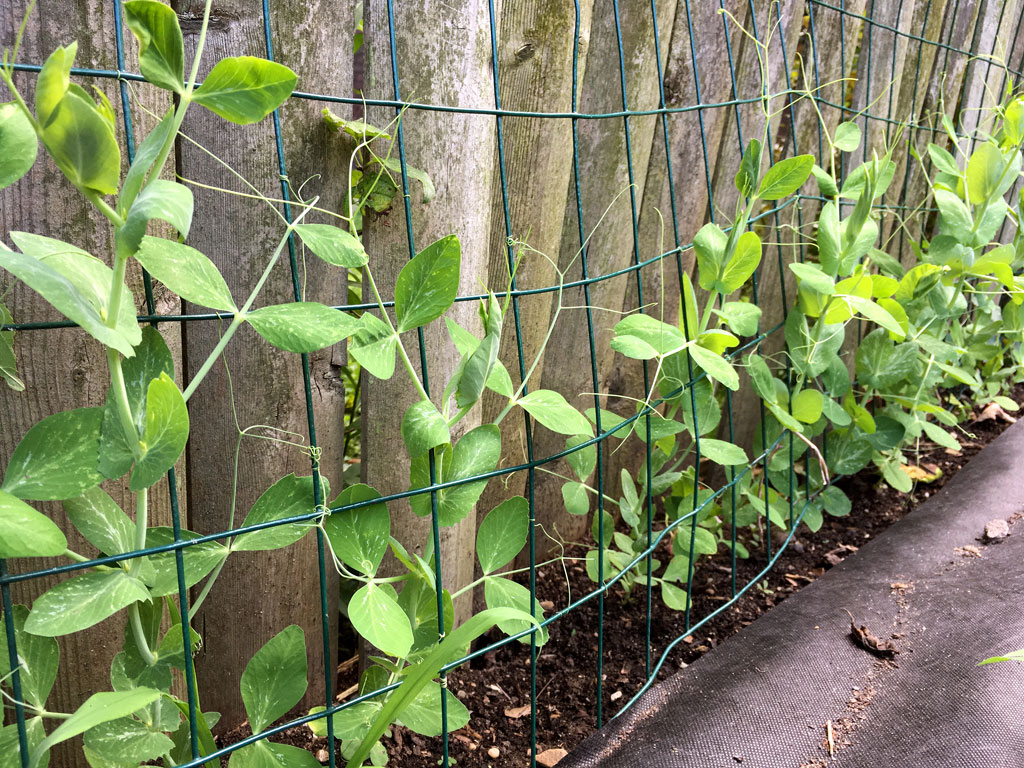 despite the erratic events in the rest of our life throughout the spring, david managed to get the earth turned and the planting mounds ready on time and all the plants went into the ground mostly on time. 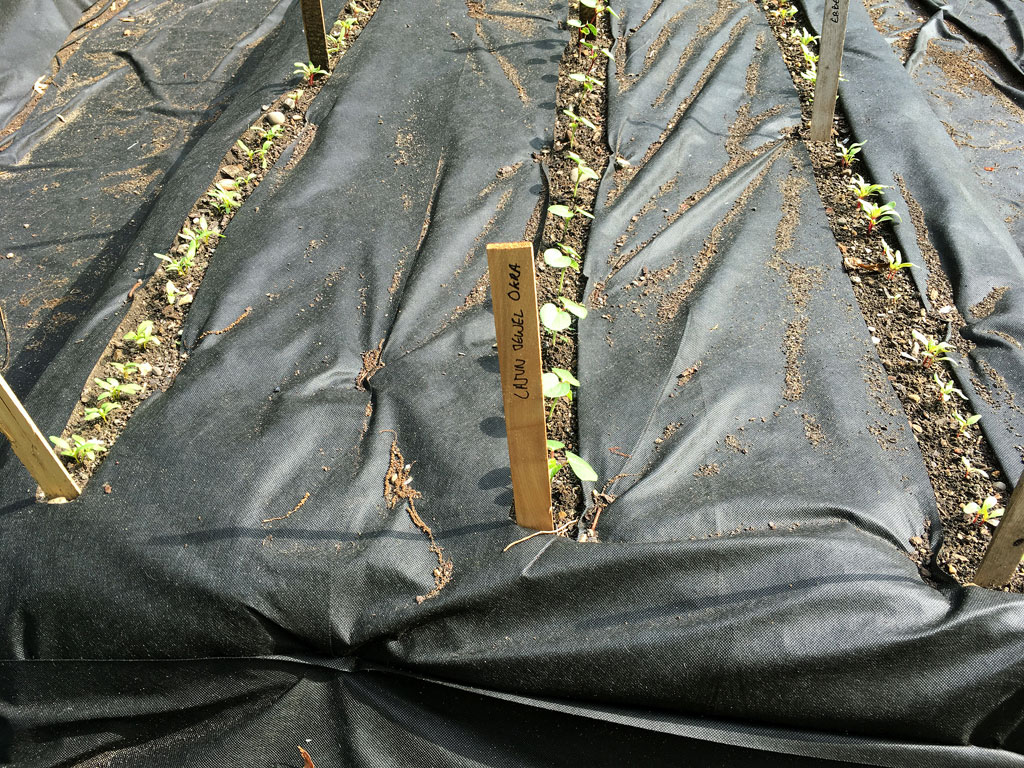 seeds went in later than usual, but thankfully, everything germinated very well and continued to thrive week by week. 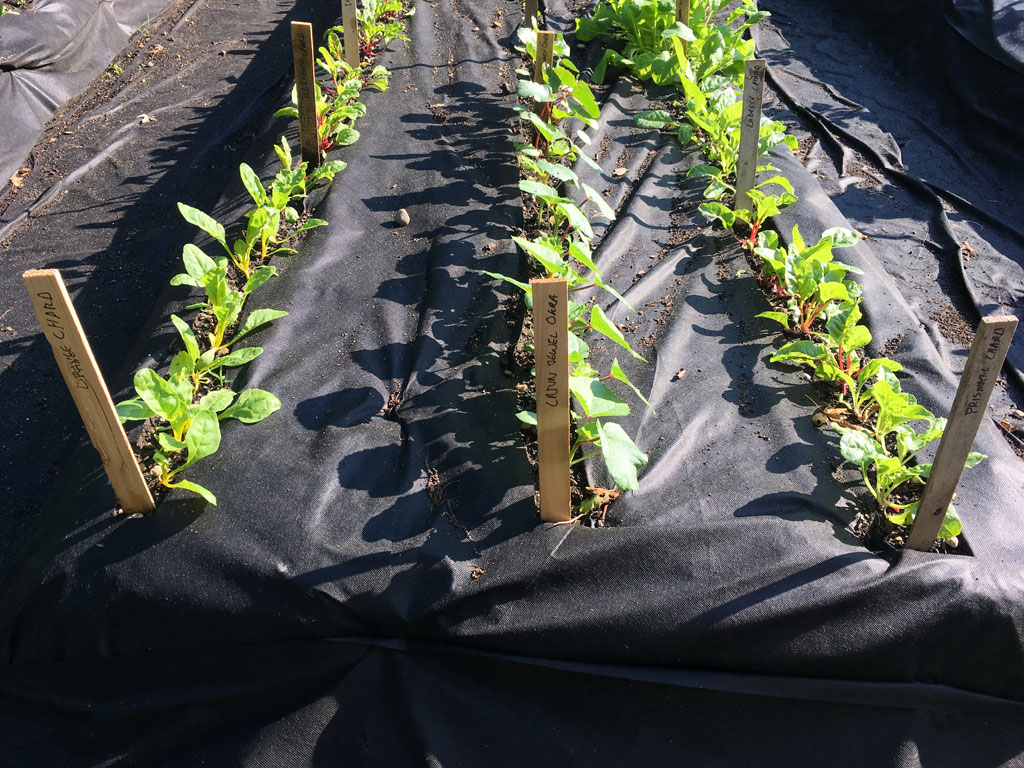 this was taken the day that i thinned all these greens, transplanting some of the thinnings to another area. 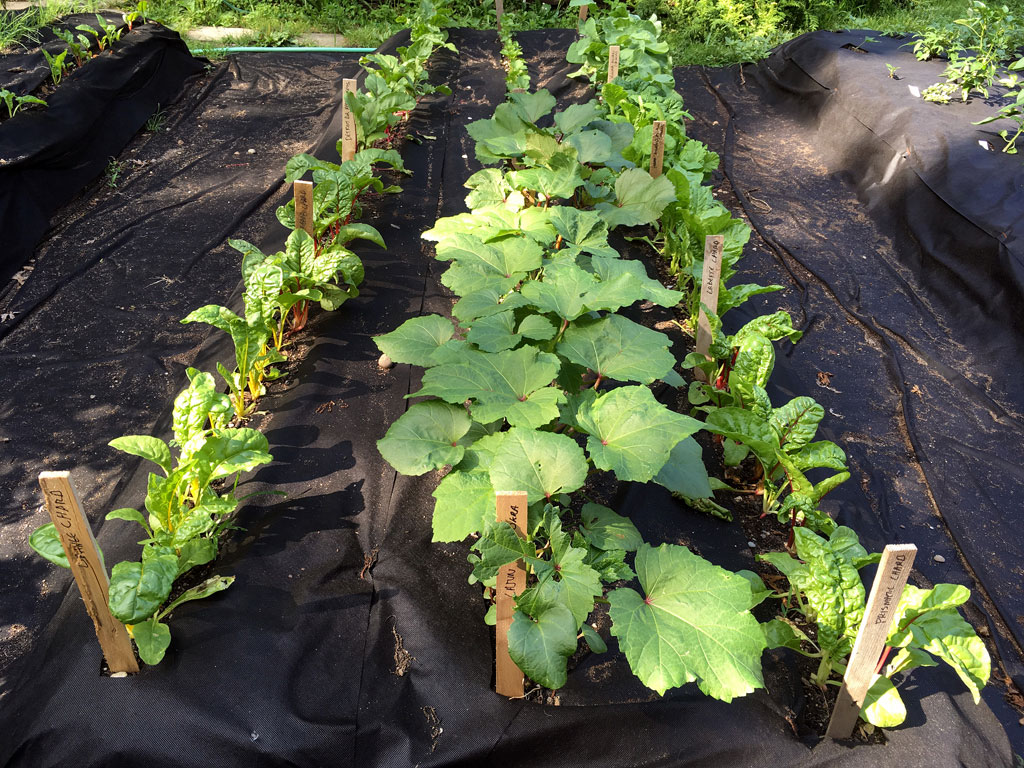 and just the other day, after trimming off bunches of leaves for lillian to take home. 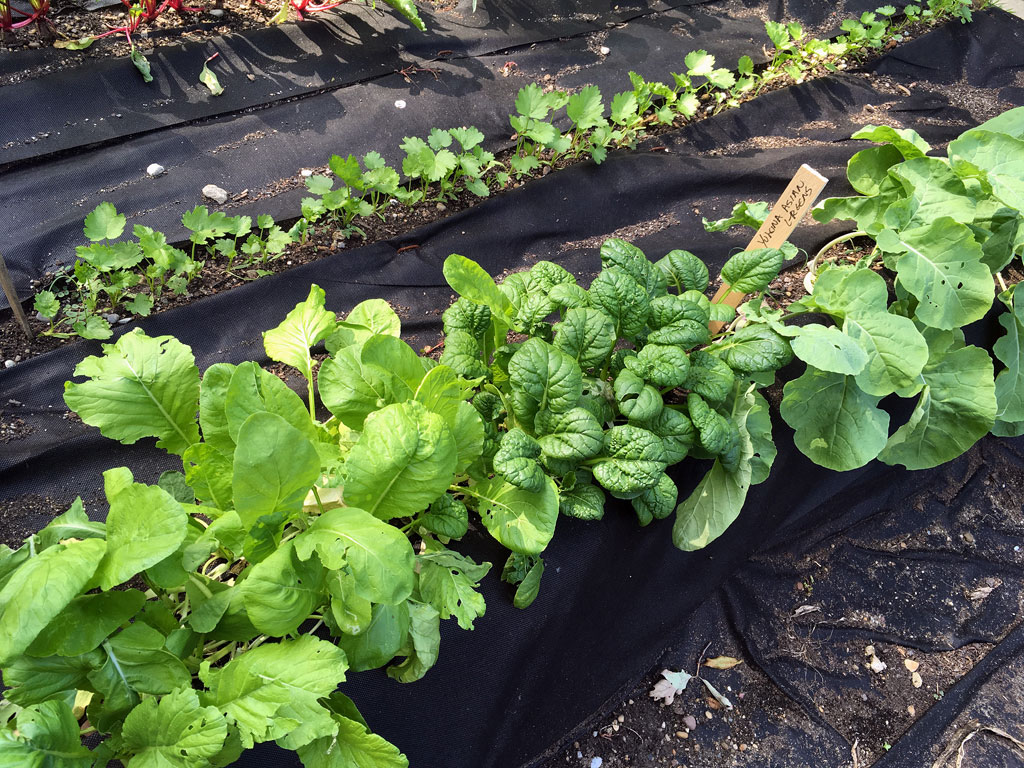 greens are my very favorite fresh garden food, so we planted a big variety of asian greens, chard, and beet greens, among other things. even the parsnips (second row back) germinated very well; we’ve had trouble growing them in previous years, but lucked out for once. i’m looking forward to harvesting parsnips in the late fall; they are hard to find in the stores where we live. 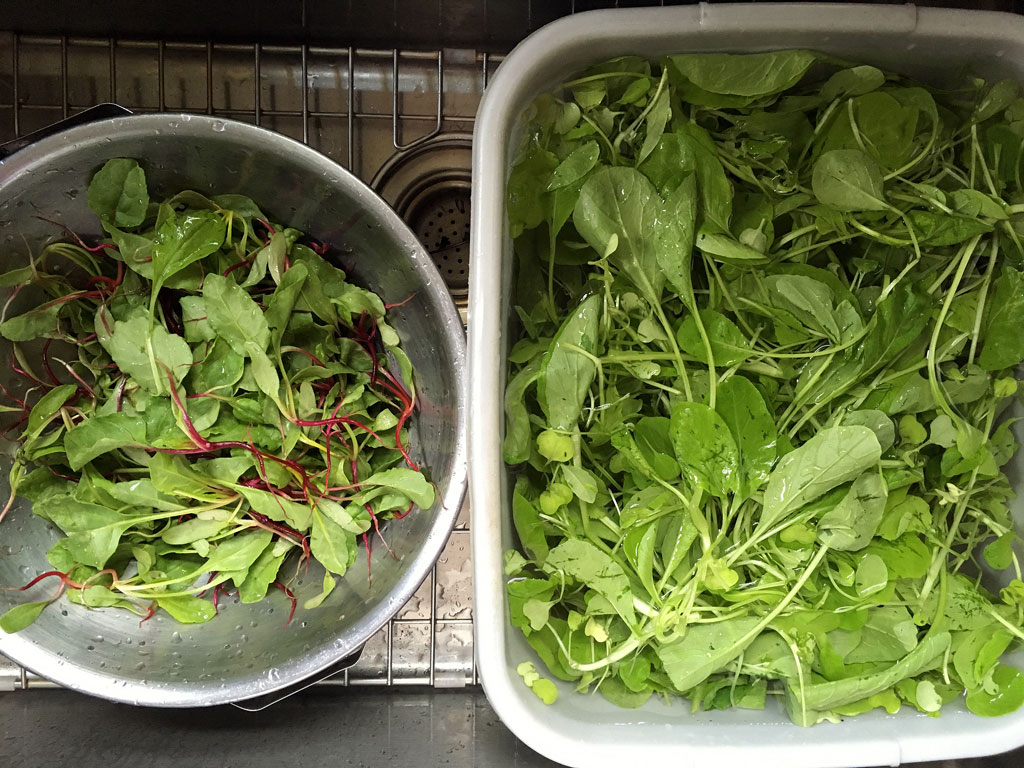 meanwhile, we’ve been eating very well from current offerings, first from the thinned seedlings (super nutritious!) and now from the hardier mature greens. above left are the chard thinnings i took out of the ground about ten days ago and the asian greens on the right. we made a huge salad with these and ate every last bite. 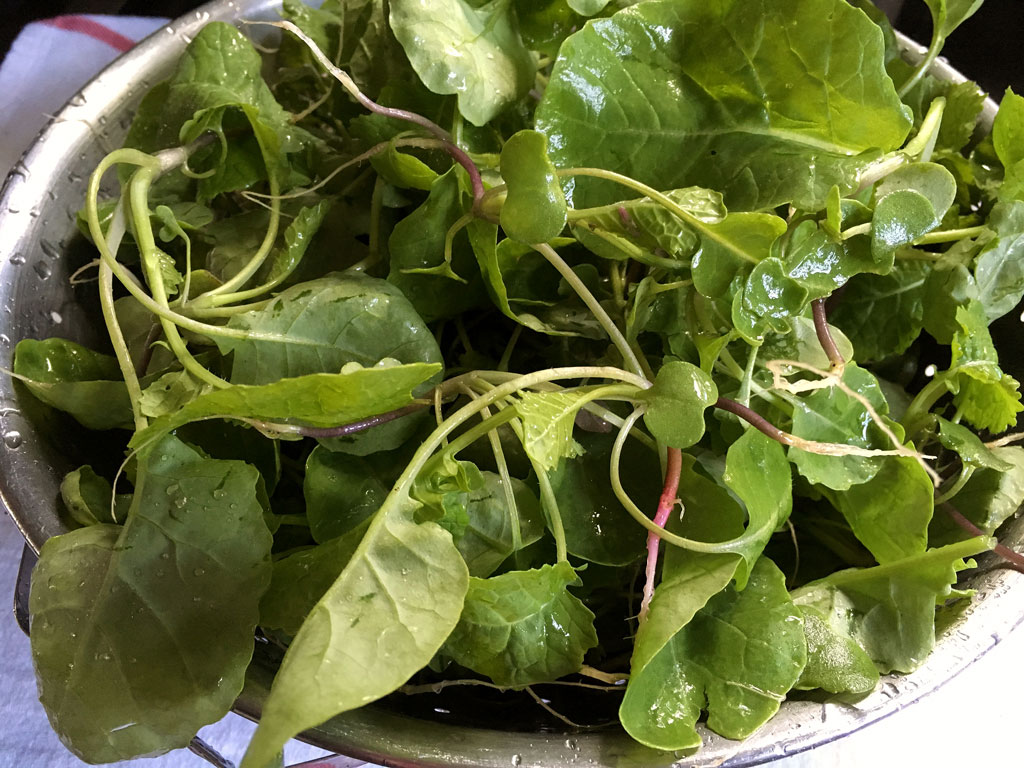 these are rutabaga seedlings that i thinned out and discovered are absolutely delicious both raw and cooked. i mean, REALLY delicious. i had thought they might be a bit “cabbagey” and not digestible, but they are quite the opposite—a little peppery and sweet and more delicate in texture than they appear. we can clip a few leaves at a time from each plant if we want to continue eating them. 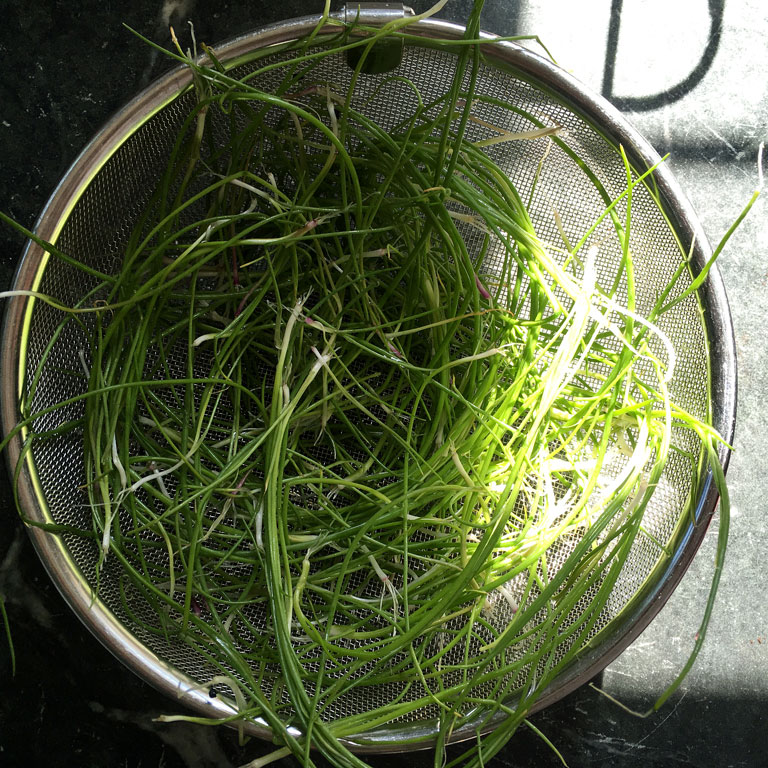 when i thinned the scallions, i just couldn’t bear to toss out the sprouts, so i washed them up and added them at the very end of a stir fry and boy oh boy, were they just the right touch! it’s wonderful to savor these once-in-a-season delights when we can. 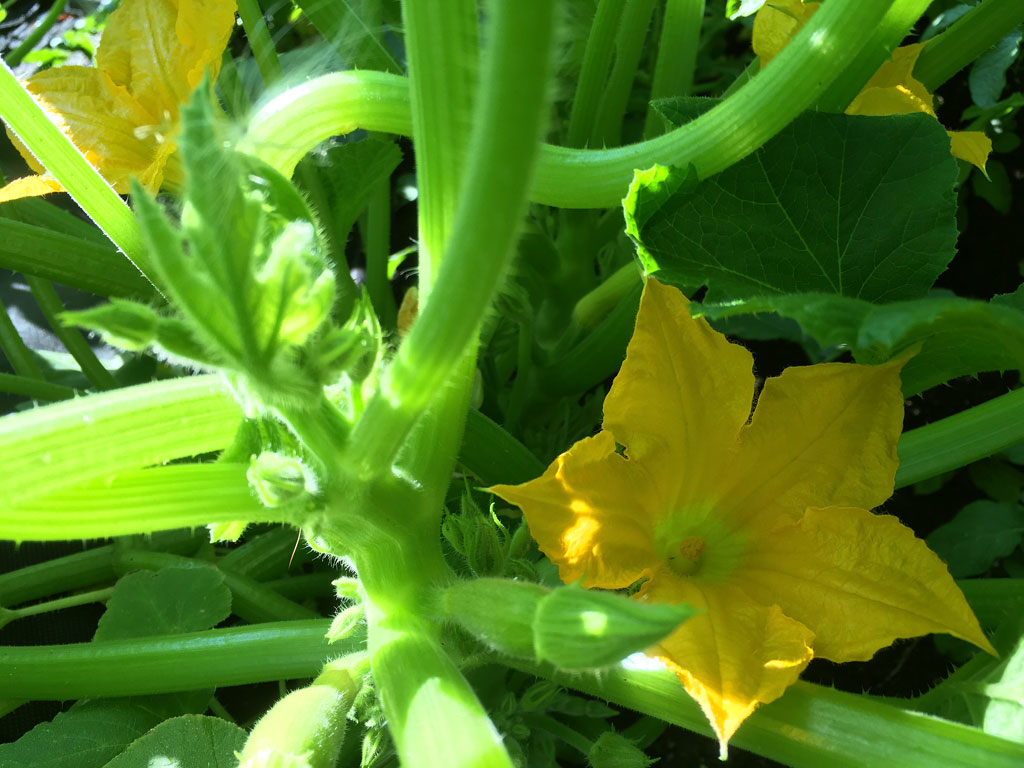 once the garden takes off it seems like just a moment before the plants are huge and bearing more substantial fruit. 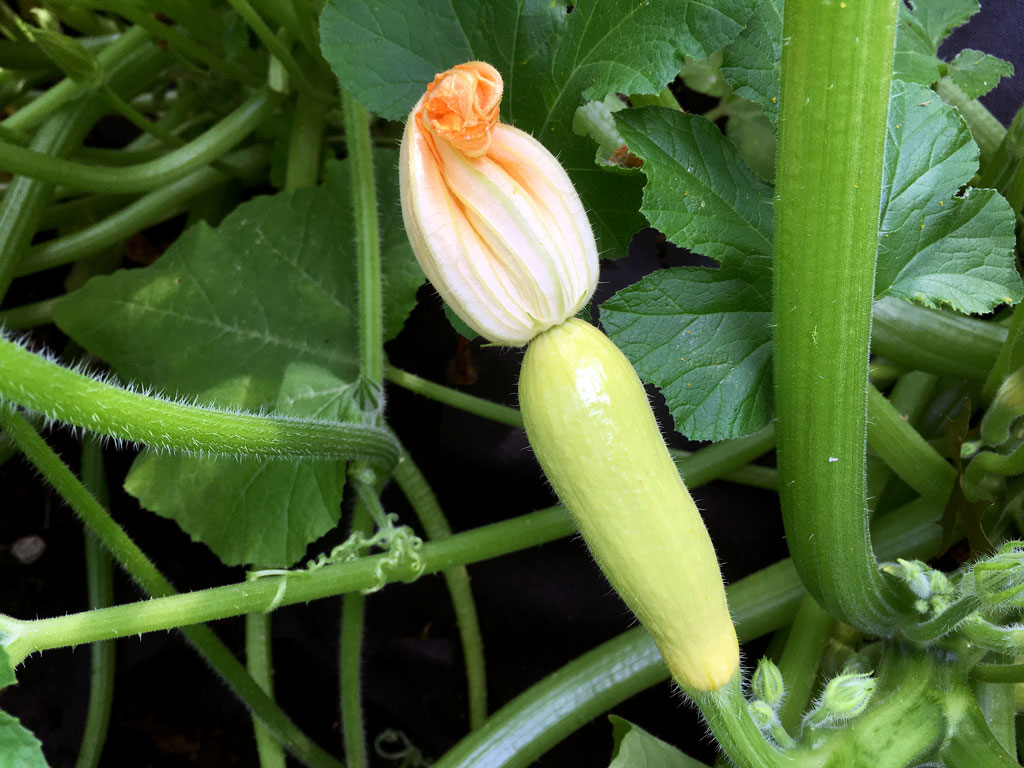 suddenly i need to get out there every single morning to check the squash plants; i pick most of them when they are quite small and most tender because A) i prefer eating them at that stage and B) i use up more of them that way. i only need the larger ones here and there and they are difficult to give away. 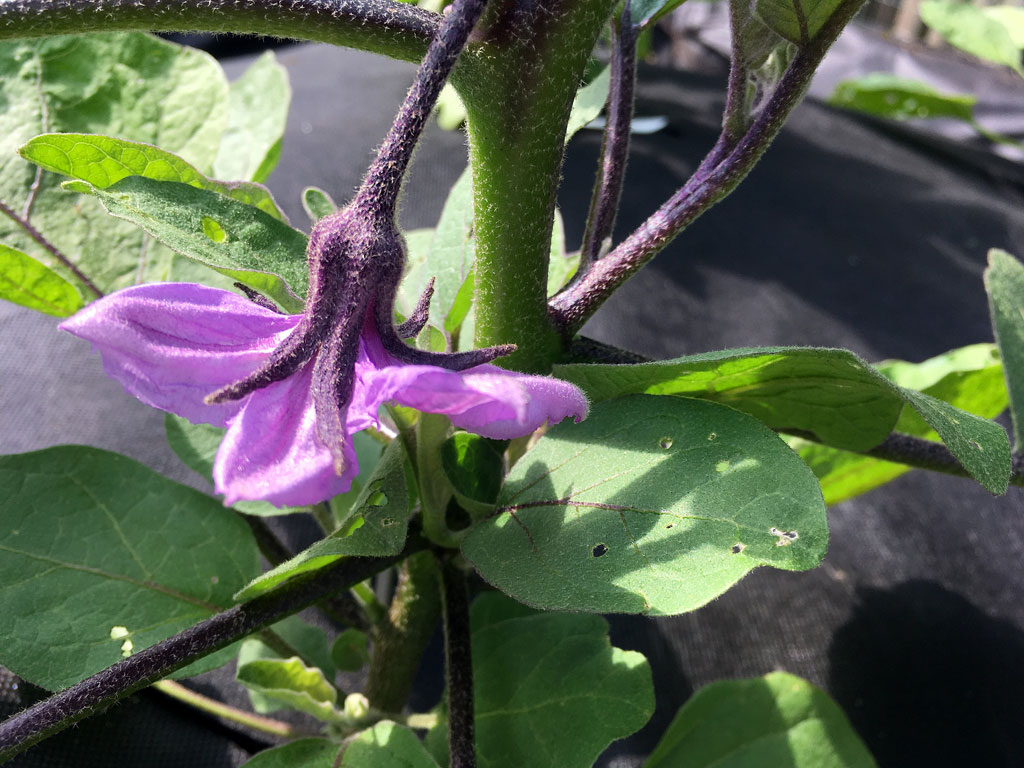 it’s the same situation with all the plants—from flower to fruit in just a few days, it seems. this year we are lucky that many of the veggies that go together well are ripening at the same time. 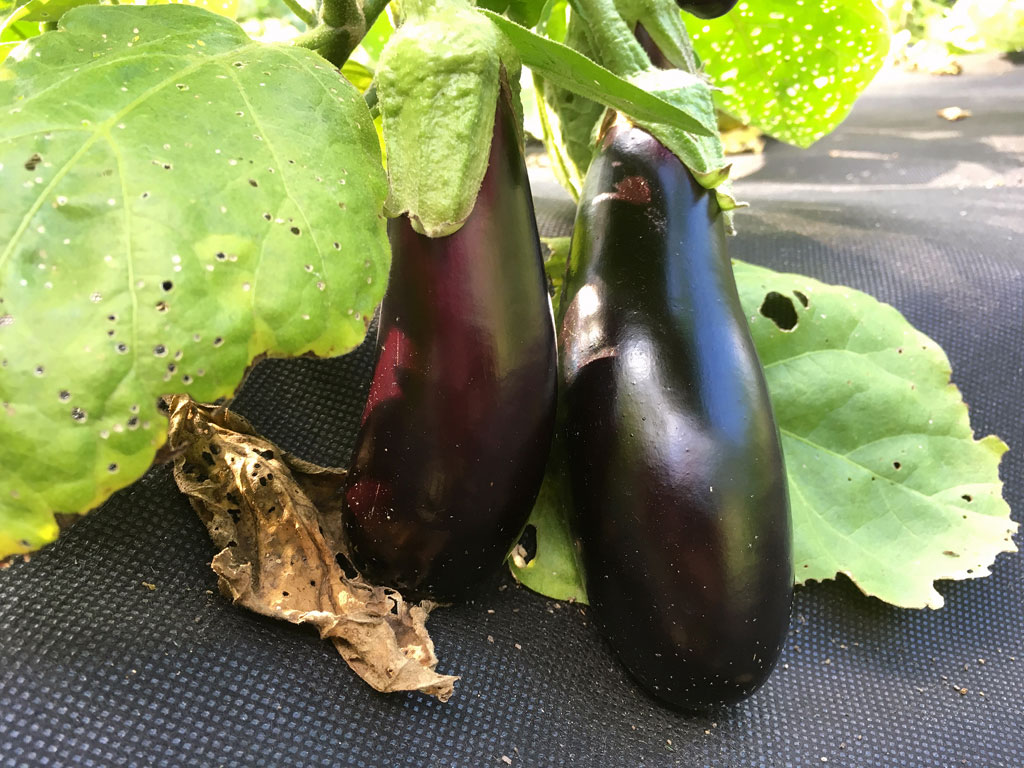 some years, the squash is ready way before the eggplant, but this year they came in at the same time, along with peppers and a few tomatoes. 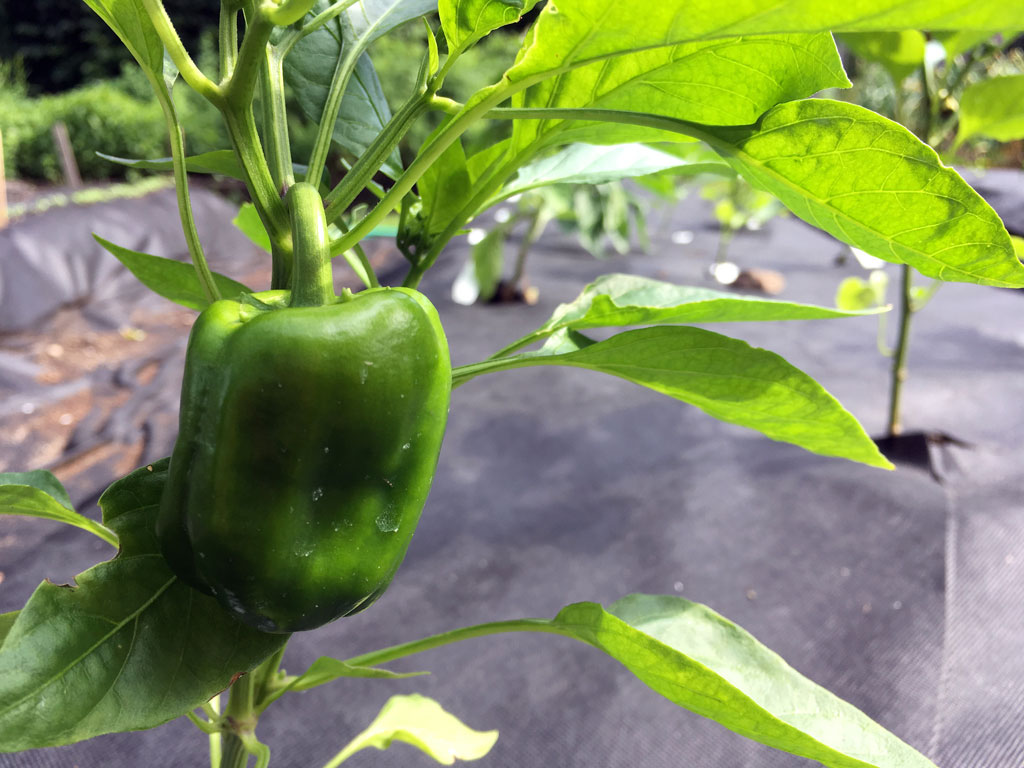 it’s really due to the circumstances around our planting—we bought our plants and got them in the ground before memorial day, but then the dog ran off and we got our seeds in kind of late. that gave the plants more time to mature. now that i know this timing works well for good eating, maybe we’ll stick to it in the future!

i picked this tomato yesterday and today, david picked a few more that are really ripe—when i look back to previous years on the blog, it looks like we are right on schedule for the first tomatoes. yay. i just wish some of our cherry types were ready. 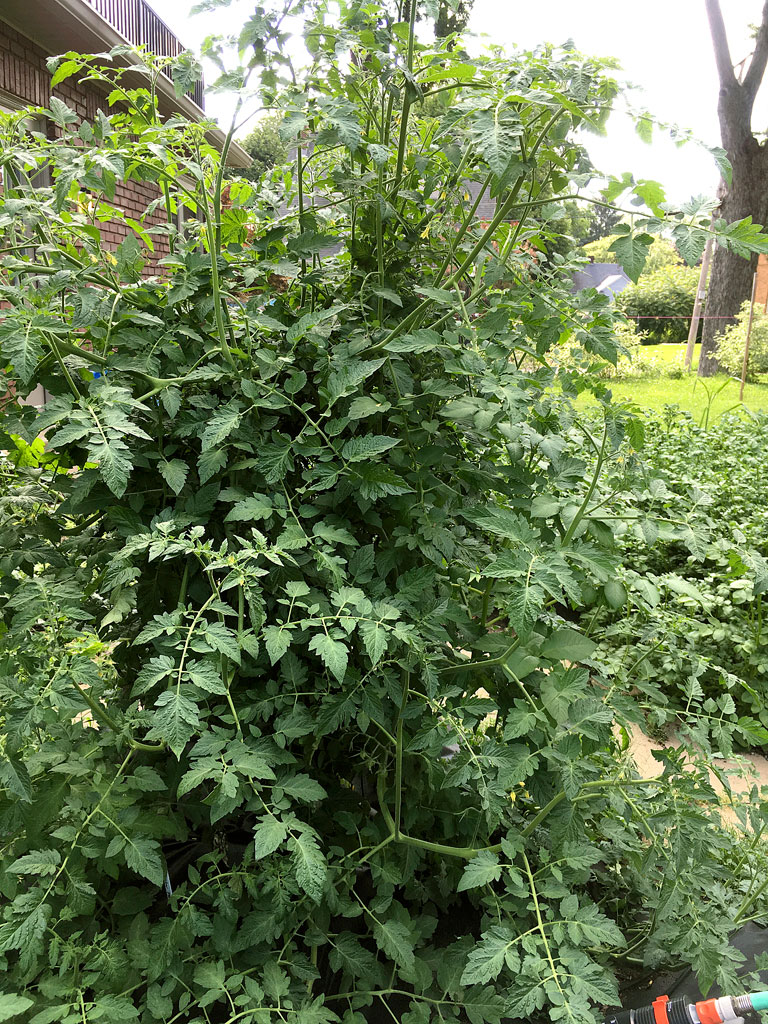 the plants are scary big but have few flowers or fruits yet. i think they suffered bit when we had some extreme temperature changes in june. maybe the delay bodes well for keeping them healthy a bit longer into the summer. 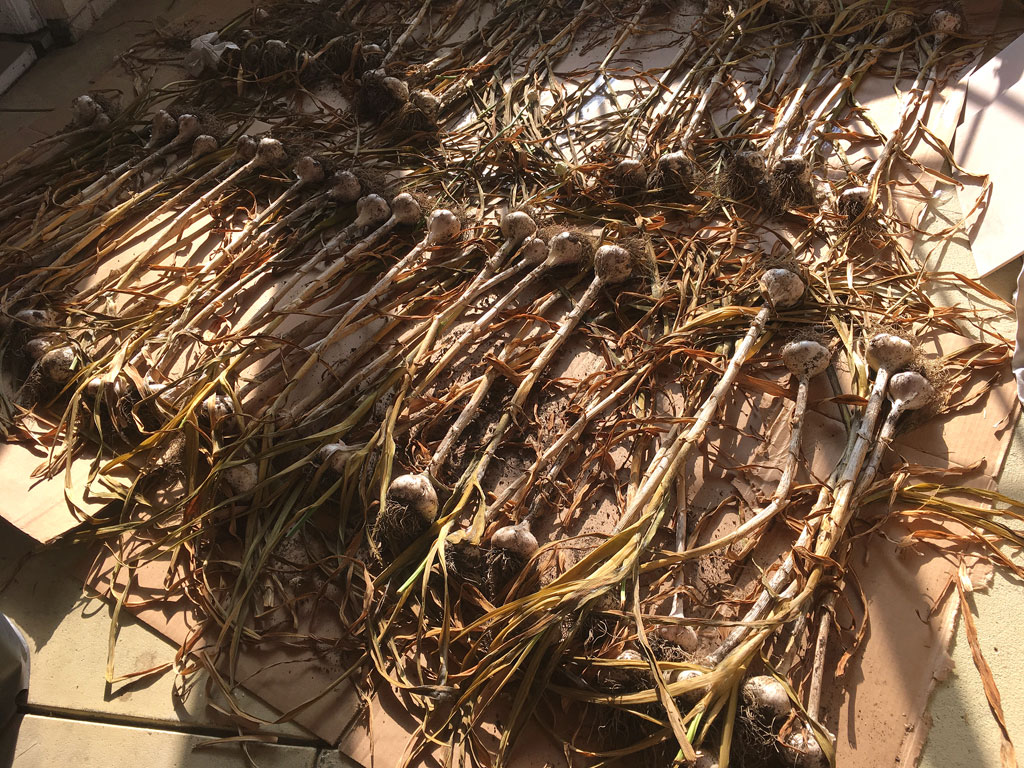 speaking of timing, our garlic matured REALLY early this year. i wasn’t expecting it to, since we didn’t have scapes until mid june (ours often come in mid to late may). and then it seemed as if i’d just cut the last of the scapes when david said the first bulbs were ready to be pulled. but none of that matters when the results are so grand—we ended up with about ninety heads, most of which measure between three and four inches in diameter. 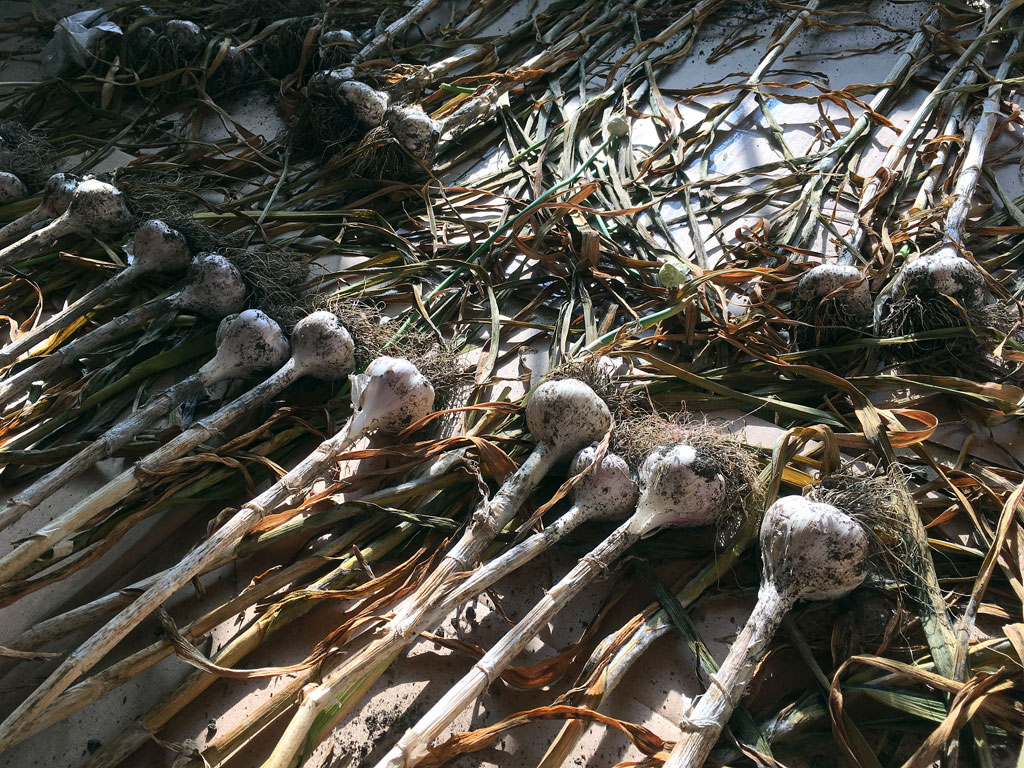 this is just about double what we harvested for the last two years and i’m thrilled; we always run out before winter ends. we planted a bunch of different types, but they get so jumbled that it’s the luck of the draw which ones we use at any given time. we’ll save out the biggest heads to use for seed garlic in october, as we’ve done for the past few years. i’m glad we’ve got lots this year because i like to gift some when i can. 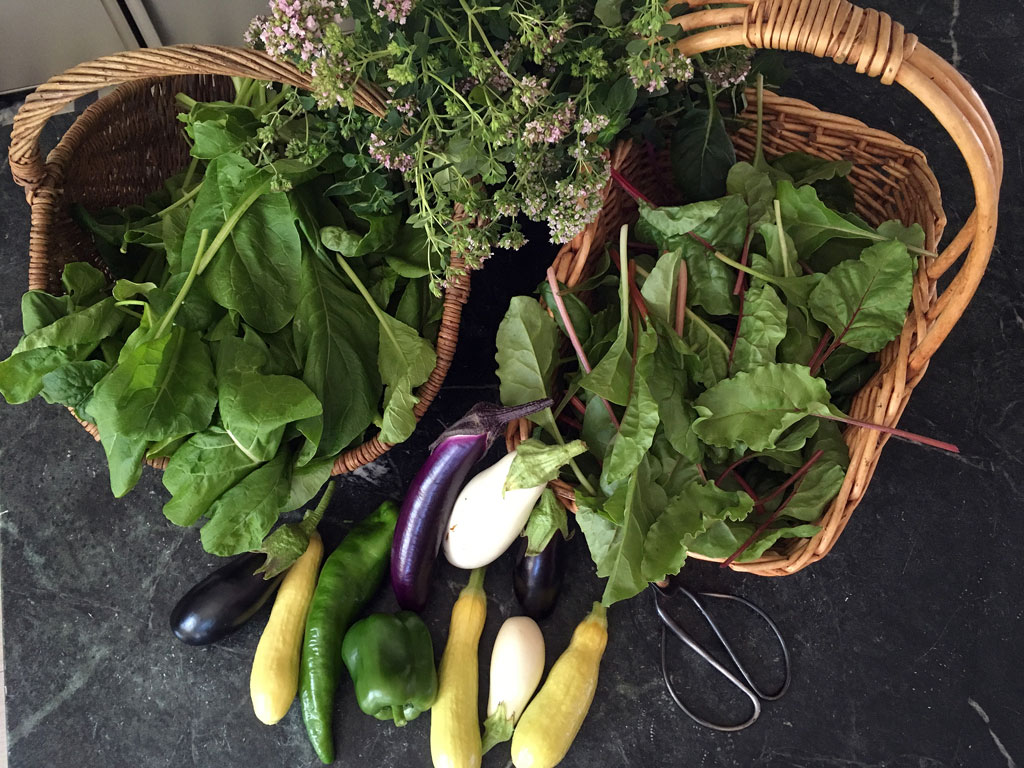 i can’t resist a still life when i have the chance. a beautiful garden haul deserves a nice photo though, i always think. green squash is decidedly absent so far—those seeds went in last and they’re not ready yet, but they seem to be growing well and i hope we’ll have some nice dark zucchini too. it’s just as well; we have an abundance of yellow ones already. 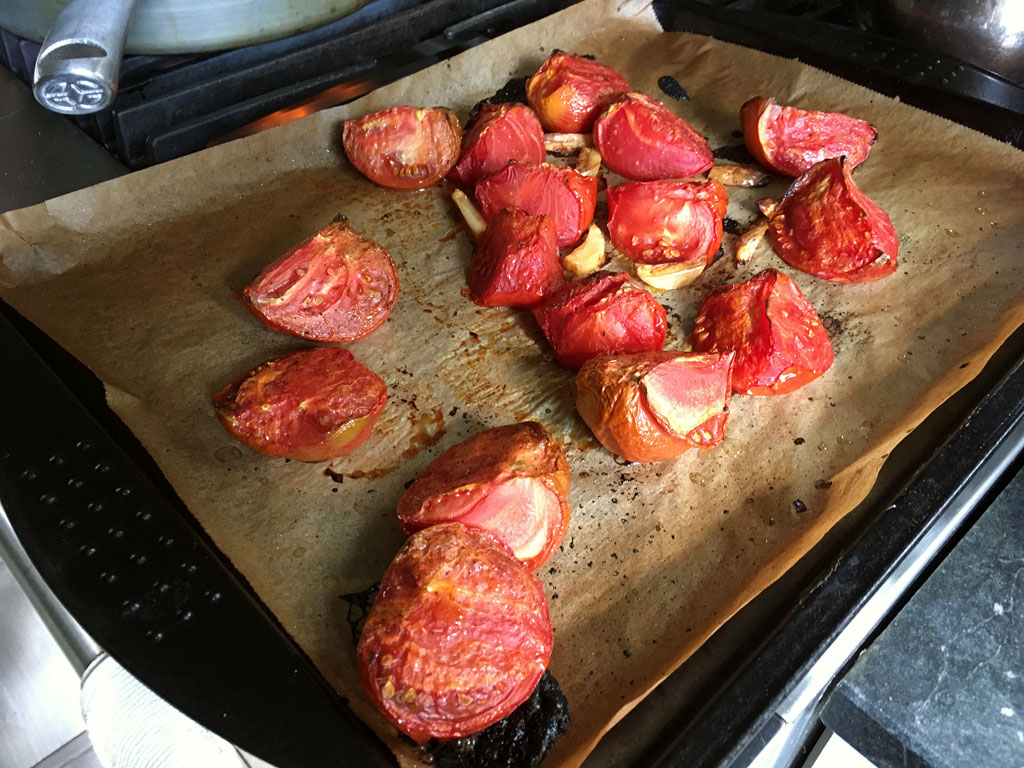 with the garlic ready and all the other beautiful goodies available at the same time, i was hungry to make a celebration dinner this past weekend. i roasted some farm tomatoes with the garlic and sautéed them with 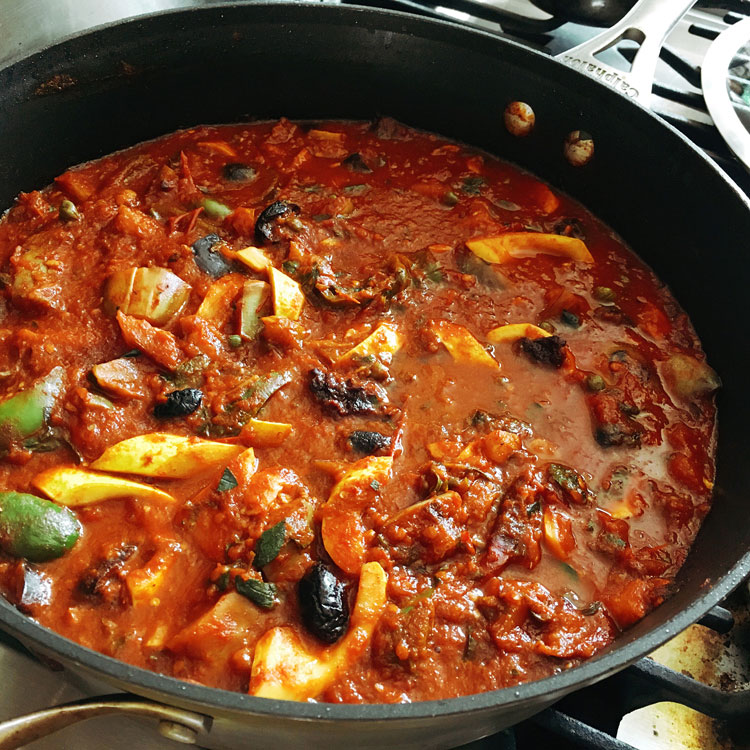 and we feasted on puttanesca, fresh from the garden. O.M.G., was it good. just thinking about it makes me drool all over again and dream of the leftovers we’ll eat tonight. 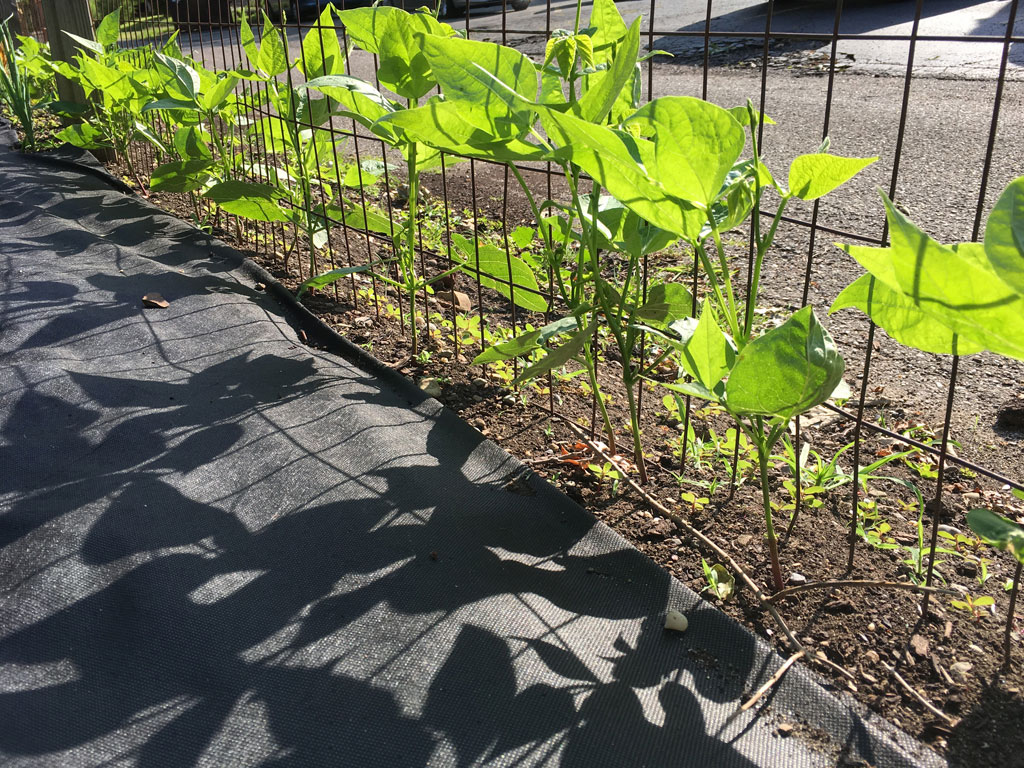 now don’t you for a minute think that i forgot to plant, or decided to pass on, green beans this year—i didn’t.  and anyway, barb wouldn’t let me get away with that. they went in slightly late but are catching up quickly; each day they cover the fence further, sending beautiful tendrils up into the air. 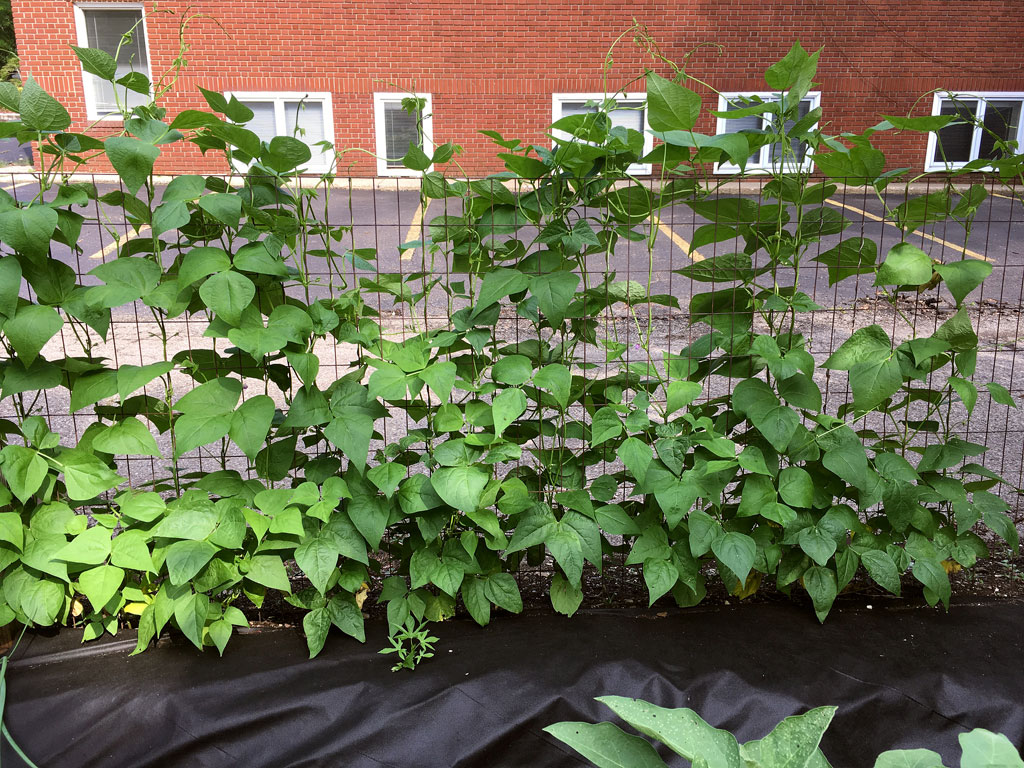 the type that i grow—mathilde or matilda—are climbers, but produce a long slender green bean with great flavor and even better, a heady scent—both the flowers and the fruit. when i open a bag of beans from the fridge, it is filled with the most wonderful (but elusive) fragrance.

last week, their deep purple flowers began to appear—green beans in the making! this visual perk is another reason i love this variety—a pretty back border for our garden and a bit of interest for passersby along our back street. no actual beans just yet, but by the time i get back from my weekend trip to nashville, we might have some beans to pick. this variety is a fabulous producer; if kept well-picked, they will produce heavily and as long into the season as you can stand it—only a killing frost will stop them. from my single row of about twelve feet, we will pick up to twenty pounds per week at the height of production. 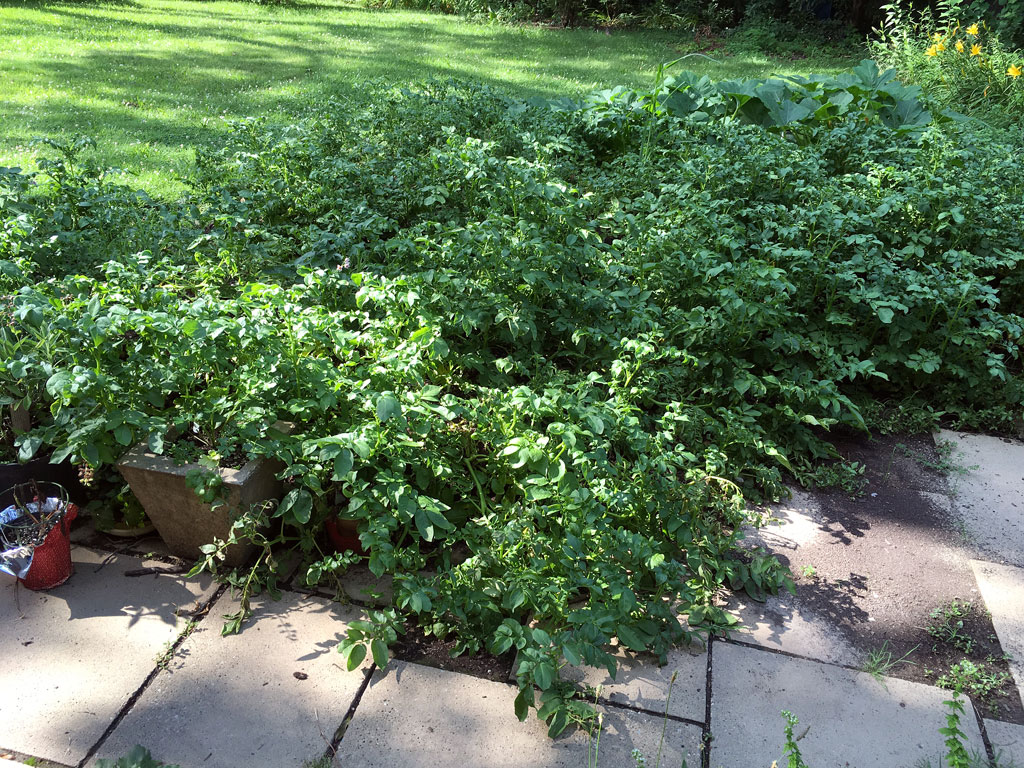 and finally i will show you our potato patches, which have spread to an almost unwieldy size, hopefully signaling a good potato harvest. last year we also had super healthy plants, but hardly any potatoes and some of them were not good, lacking the texture and flavor i enjoy. but we had experimented with a different planting strategy and this year we went back to good old dirt. they’ve started flowering as well; we’ll know what we’ve got in a few weeks when we burrow in to gather a few first baby potatoes. 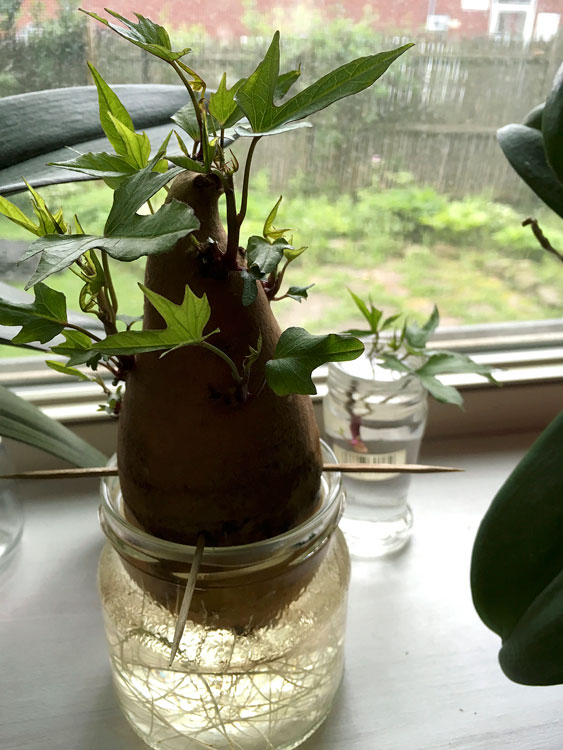 back in april, i started working on sweet potato starts using one of the last roots form last year’s harvest—i saved the biggest one for this purpose. i’d meant to start in march, but got waylaid when cardigan joined our household. despite being late, we certainly gleaned many healthy starts from this one potato. i’m not sure how many in all—it’s very hard to stop, once they begin springing from their mother root. i think we have at least a couple dozen plants, if not more. in fact, the last few starts are still in a jar on the counter and i need to get them in the ground. the frost usually comes pretty late in our season so we might still have time for them to mature . . .

speaking of wonder dog, i don’t mind having extras this year because we now have a third mouth to feed who happens to love sweet potatoes (which are very good for dogs)!

cardigan is already enjoying a variety of garden goodies, in fact. while initially she was very suspicious of vegetable chunks in her food, she just DEVOURS her veggies now. i cook a few small batches every week and spoon a different combination from the containers into her kibble for each meal; when i run low and they don’t appear in the quantity expected, she definitely notices and does not eat with her usual zest. i’ve created a veggie monster. funny, she does not take to fruits with the same zeal—sometimes i can get a few mashed blueberries past her lips, but that’s about it. blueberries are a start tho . . . 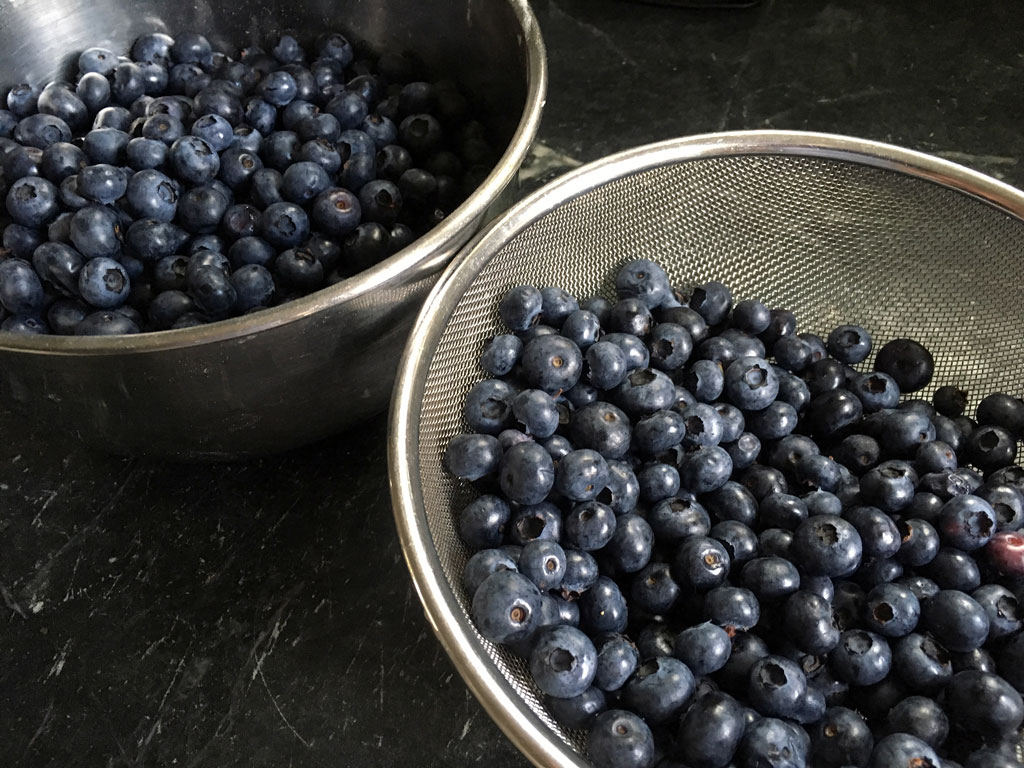 we don’t have our own blueberry bushes, but i’m hoping some day we can put some in. for now, we buy them from a local farm and july is the month! i’ve purchased a couple of large boxes, but because i still have some from last year in the freezer, i’m mostly baking with them this pie looks a bit homely, but man, was it good eating. i wish you could have tasted it!