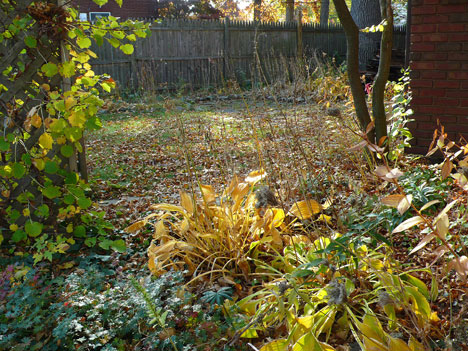 at the end of last week, almost caught up on work, i raised my head from the keyboard and realized that late fall is setting in and that i should spend the weekend getting some of the garden organized for winter. my friend michele, who makes all of those cute project bags i favor so much, has been urging and enabling me to plant garlic this year, which needs to go in during the fall.

my friend jeff told me that he always plants his during the full moon of october and since the moon was due to be full on saturday, i made sure to set aside that afternoon for planting. 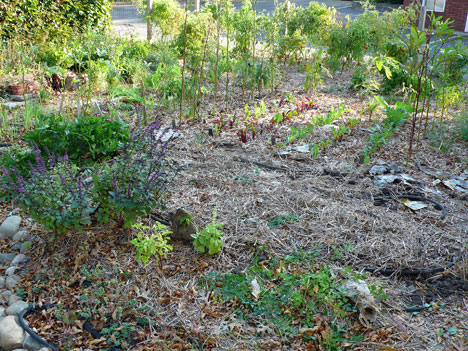 we were supposed to get rain that day, but instead, the sky remained sunny and the air was balmy—perfect for working outside (i’m a wimp about working in the dirt when it’s cold and damp, sigh). 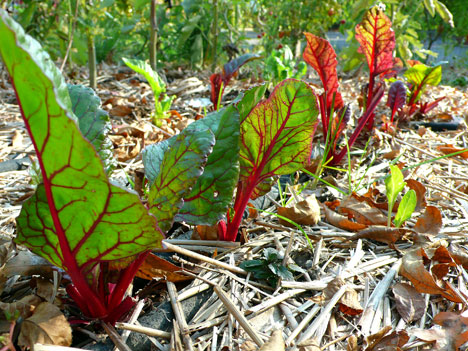 we still have a lot of food growing out there, despite a couple of light frosts. our garden is fairly well protected from the conditions that allow frost to do damage, so we won’t lose much until the harder frosts hit. and even then, we should be picking greens, scallions, and herbs into december, or even january. 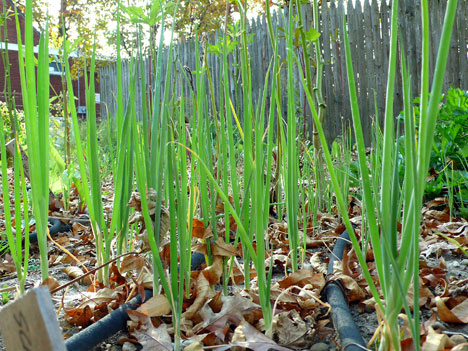 what is surprising though, is how many tomatoes i’m still taking in—it’s the end of october, and cold for heaven’s sake. but the weather has been more consistent now and they do appreciate that.

i’ve been picking a good-sized basketful every couple of days. they’re not as fully ripe or heavy with juice as the august tomatoes, but with a few days of indoor ripening, we are privileged to have wonderful tomato dishes for dinner several nights each week. 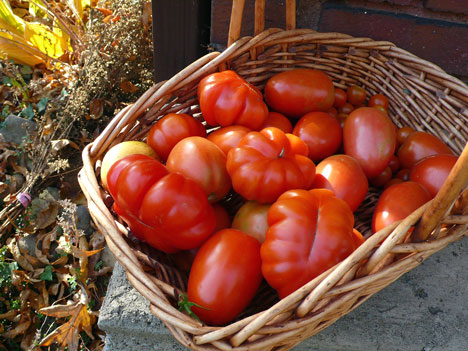 ditto for the cherry tomatoes—prolific as ever they were in the height of the summer. and delicious, too; i almost don’t know what to do with all of them (but posting photos for my friend gail to drool over is one way to put them to good use!) 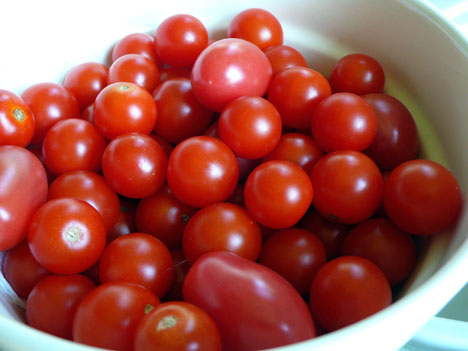 and in addition to that basket of tomatoes, i picked another one full of tiny eggplant and peppers for a curry dish later this week. 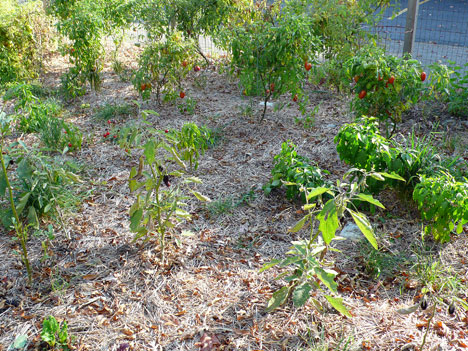 anyway, getting back to the garlic, before i could plant in the spot i wanted to use, i had to pull up some things to get the bed ready. this is the first year i’ve grown such a variety of root vegetables, and i didn’t plan their position in the garden as well as i could have. much as i wanted to leave the leeks and celeriac in the ground til after the hard frost, they were right in the way of where i wanted the garlic to go now (i have my reasons, haha; i’m trying to plan better for next year).

so i first set to work getting what was in the way out of the ground. 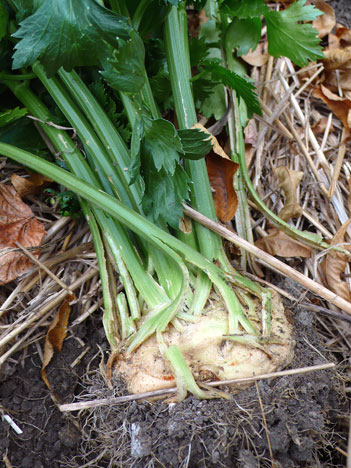 celeriac is fairly new to my garden; i grew it for the first time last year, when my friend kris gave me some starts in the spring. basically, you just plant it and ignore it all year (except for watering). you can start digging it up in the fall, but you don’t have to—it can stay in the ground all winter (and what better way to keep it?). kris harvested the last of hers in the spring and it was delicious. 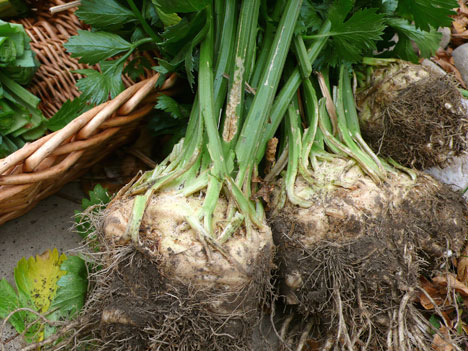 celeriac can be eaten raw or cooked and is a wonderful addition to soups, stews, roasts, stir fry, or grated for coleslaw. these bulbs are quite large; one is enough for a large pot of food. had half a dozen plants this year, which all grew to a better size than last year’s crop. i used one in the potato soup i made last night and the rest, i’ll keep in the fridge to use in other fall dishes that i’m making now for the freezer. 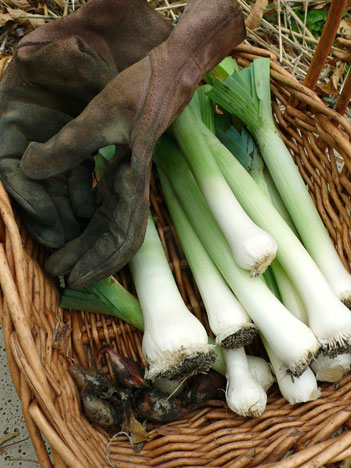 the same goes for the leeks—i planted a couple dozen sets in the spring and basically, forgot about them til fall. i’ve used some already, and i hated to pull the rest out all up at once, but i think they’ll keep well, at least long enough for me to use them up (i’m on a tear right now, while the vegetables are fresh, to cook dishes that can be frozen for later). 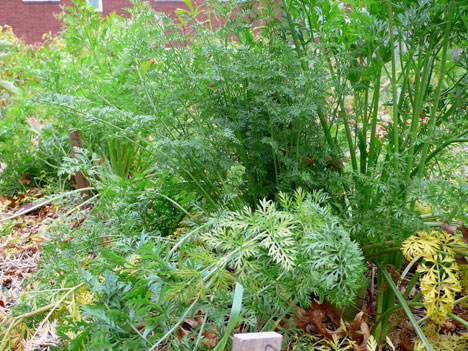 while i was picking stuff for cooking, i took a look at my parsnips to see how they were doing—i still can’t believe that i successfully grew parsnips from those tiny, dust-sized seeds. and it was surprisingly easy—just plant the seeds and let them grow undisturbed. 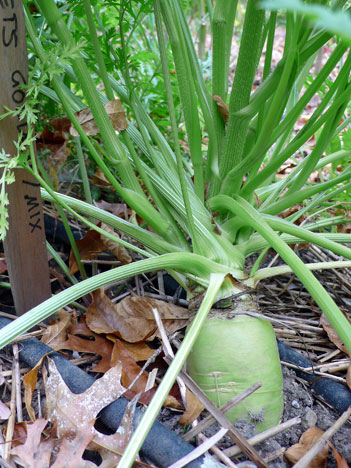 because the tops of a few roots were popping up out of the ground (i know now that next year, i should mound them with dirt or mulch throughout the summer), i pulled one up a couple of weeks back to measure the progress and was quite impressed with their size and diameter. gulp, these are the biggest parsnips i’ve ever seen—some are the diameter of a water bottle. 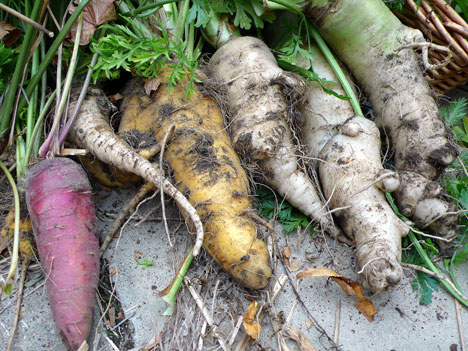 they taste good too, tender and sweet, not at all bitter.
and look—those are some carrots, haha. i planted carrot seeds but i didn’t think any really germinated; they look like little weeds for a long time after they come up. so i reseeded that row with okra. about halfway through august, i realized that i might have actual carrots growing here and there between the okra plants. and sure enough, i now have have some red, orange, purple, and white carrots. so i picked few of those for the kitchen, too. i want to make a big pan of roasted vegetables this week.

i know—i still haven’t talked about the garlic; see how easy it is to get sidetracked once i go out in the garden? it’s a black hole of neediness.

just kidding—if i didn’t love it, i wouldn’t let it to have its way with me like that. 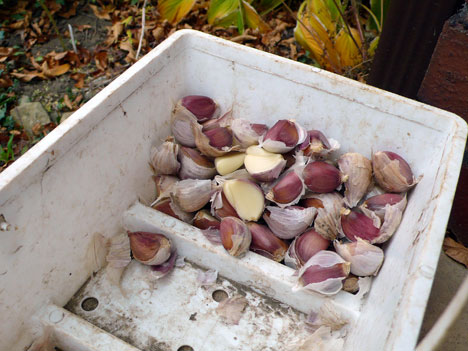 i broke up the garlic heads before i went outside, reserving the large, outside cloves for planting. the rest, i put in my garlic jar for use int the kitchen. since michele sent more than enough to make a good planting, i’ve been using it for cooking since i received it, and let me tell you, i’m hooked. fresh, home-grown garlic is like no other and next year, it will be MINE.

after pulling all the leeks and celeriac, i forked the compacted dirt well to lighten it up—our dirt gets heavy and clumpy after a whole summer of sitting under the mulch. i probably should have added something to the soil, but i forgot what michele told me about that (can i still add it on top of the planted bed?).

then i drew out some rows and planted the cloves about one or two inches deep, root side down. i made three rows and staggered them so they sit about six inches apart in each direction. 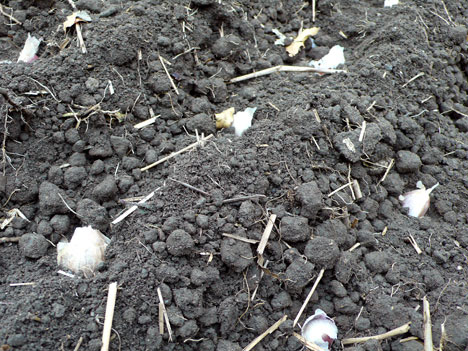 one of the things i’m worried about is not remembering exactly where i planted the rows, so i outlined the bed with the unused soaker hoses and made a few signs 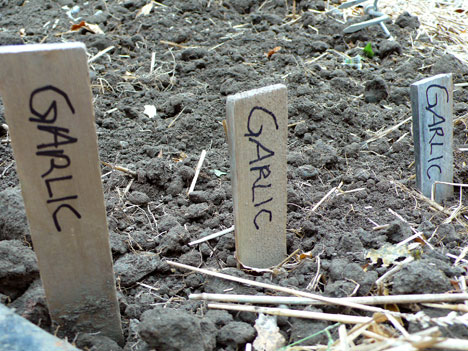 we’ll put up some stakes and string around it this week so it’s mapped out above ground. now, david will know what area to avoid when he’s tilling. this is why i wanted the garlic to be in a certain spot—i want to reserve a space for plants that should not be tilled under, like the oregano, garlic, and other perennial herbs, but i don’t want to make it inconvenient for david to work around. 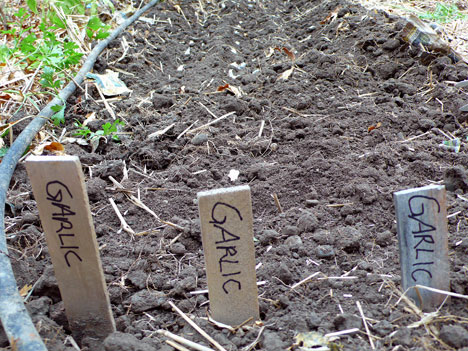 once i had them marked, i covered the rows with dirt. i planted fifty cloves and hopefully, we’ll get a nice crop out of that. this little section of the garden produced very well this year; the root vegetables seemed quite happy and grew to a good size in this spot, so i’m hoping for the best. 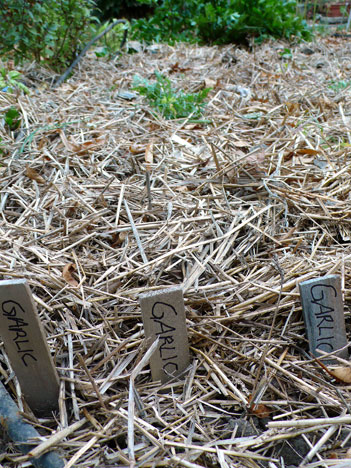 the final step was to grab some of the straw mulch, now beginning to break down, from the nearby garden path to spread over the top of the bed. that should make a nice blanket for the winter and we certainly don’t need it any more where it was.

haha, it looks like a little garlic graveyard, doesn’t it??

afterward, i went indoors and set to work in the kitchen, cleaning and storing the vegetables. yesterday i made soup and during this week, i’ll fix a couple of other dishes for the freezer. you probably have guessed by now that i have not new knitting to show today—between secret projects and garden work, there isn’t much left.

but next time i’ll have something, i promise.
for now, have a tomato . . . in fact, help yourself to a handful 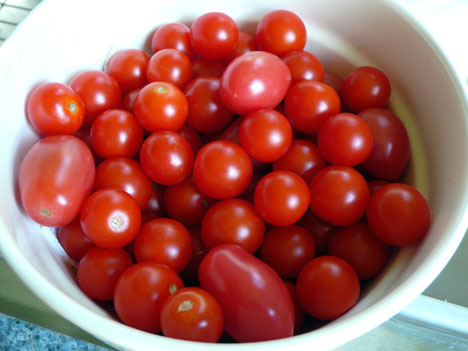