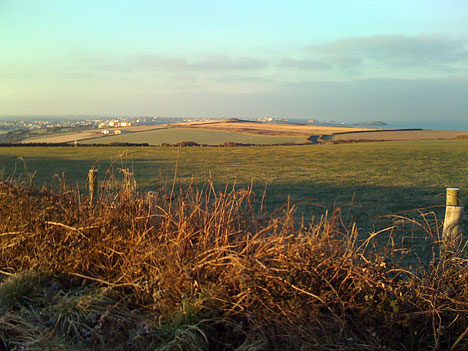 a very quick post here to share a few more photos from cornwall. this morning i went out again before classes began and this time, i took the road which winds up and away from the hotel, toward the next town and the airport, just to see where it went. 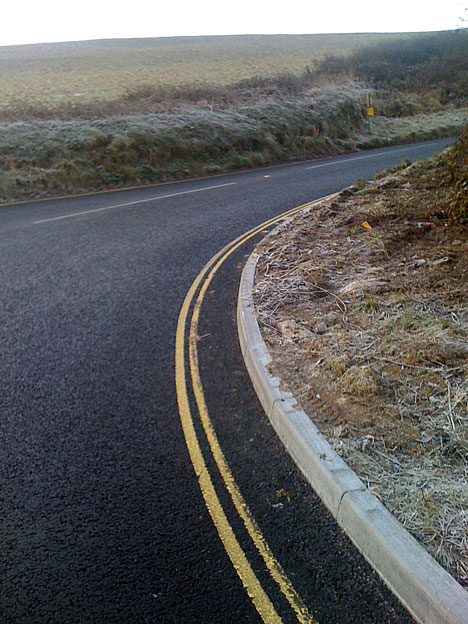 it’s a steep climb initially, a real butt-buster, but a good way to warm up and get my blood moving, first thing (as you can see, it was quite frosty this morning before and during sunrise . . .).

the climb is worth every step, though—when you get to the upper part of the hill, the skyline begins to reveal itself in full. 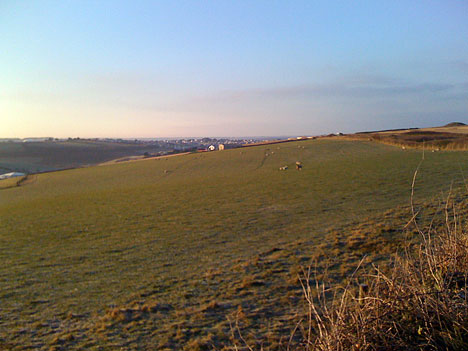 along the paved road, you don’t have a view of the sea, but on the other side, there is a wonderful panorama of local farm fields 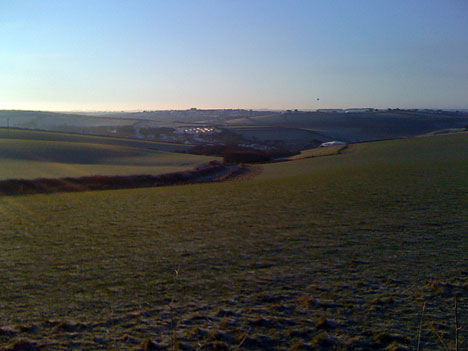 once you are at the top, the road undulates only slightly while winding back and forth along the perimeter of each farm. 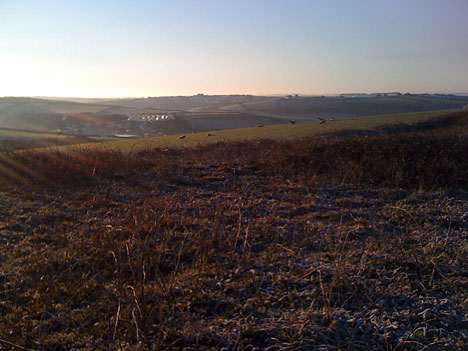 before long, some familiar forms presented themselves on the horizon and as i drew nearer, i could see a crowd of them in the near distance, enjoying the first warm rays of the rising sun. 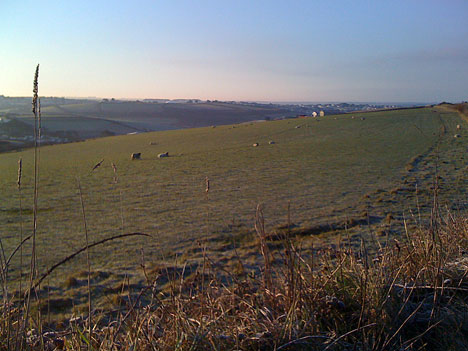 and then—wait for it—there they were, right in front of my eyes; a whole pack of mama sheep, with several obviously new additions tagging along close beside them. aren’t those little lambs just adorable??

i caught them just at the moment the sun was coming up behind them.

today turned out to be much more clear and warm eventually, but at this time of day, it was still very cold from the previous night. i walked fast to keep myself warm, but i could still feel an intense chill from the pavement beneath my shoes, which numbed my feet for a long while.

i walked a half hour in the outward direction and made it all the way to the next little town, which turned out to be directly above the area we walked to on the beach yesterday. 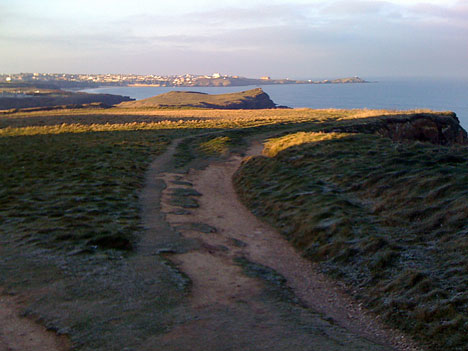 this path leads to the cliff edge where i can look down below and see the back side of the notched rock formations we stood in front of at the end of the beach saturday. 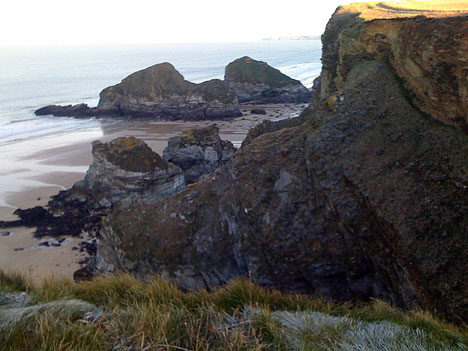 wow, it was really frosty, huh?? haha, it didn’t seem that way when i was out there taking pictures. 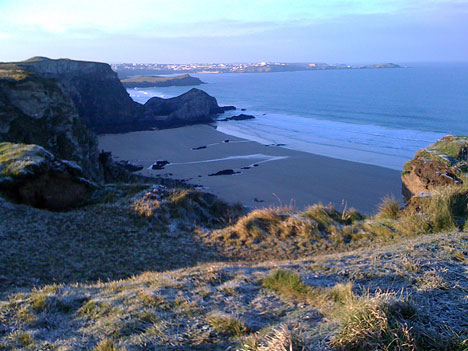 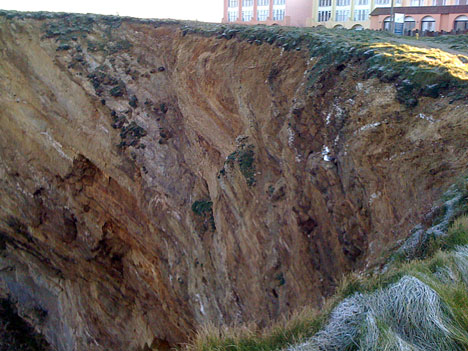 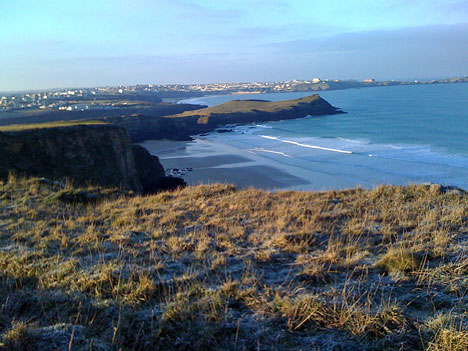 on the way back i took the more rugged path that follows the cliffs very closely to get the most of the sea view. it was a lot safer too—no cars whizzing past out there at the edge of the precipices.

the beach view was stunning from up there—that stream that runs out over the sand, though salty, was actually frozen this morning; that’s how cold it was—even the sea water froze!

what’s funny is that those white dots are birds and they are obviously congregating right in the middle of the freezing water; i wonder why? 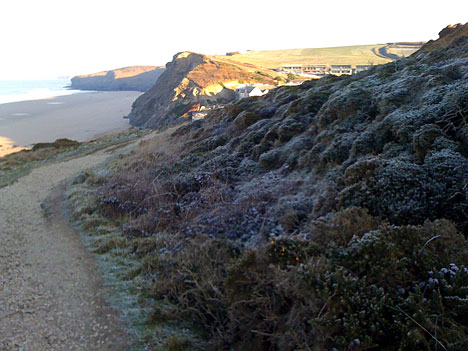 you can see that even during the final descent back to the hotel, there is heavy frost still on the ground—and that was after 9am. now, lots of you in north america will not find that unusual, but apparently it is quite out of the norm for the south of england.

i headed back inside very reluctantly, where it was nearly time to start classes. today we progressed into the the leg of the marie antoinette socks and everyone began to make noticeable progress. many aprticipants left today’s three hour session well past the heel. 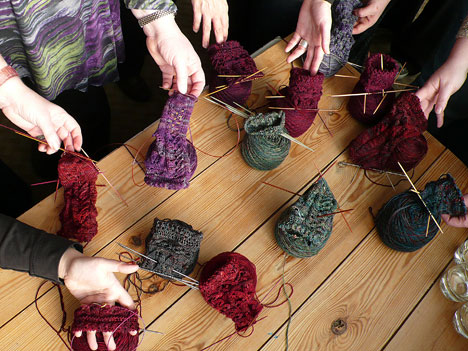 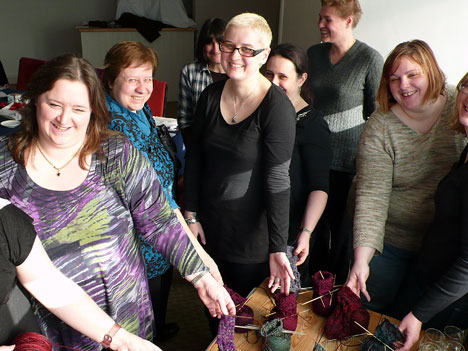 YAY!
that’s lilith from old maiden aunt, right in the middle; we may actually go to visit her at her dye studio, once we’re in scotland—i promise i’ll bring my camera along for that . . .

tomorrow is the last day of the retreat; my class will meet in the morning for a photography and photo editing session, where we’ll put our cameras and framing skills through their paces. i think we have the perfect setting for a wonderfully fun class to end the weekend.

in the afternoon, we head back to london to rest up and wait for david’s arrival. this time, i really mean it—you probably won’t hear from me for a couple of days. but i’ll be back, once we get to beautiful edinburgh. 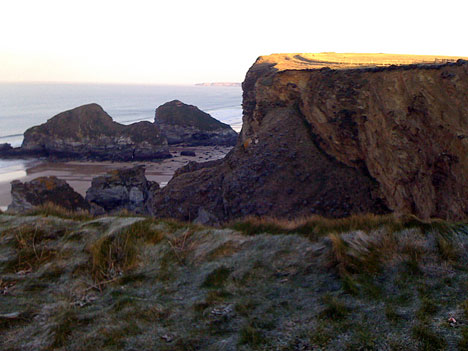 32 thoughts on “the high road”