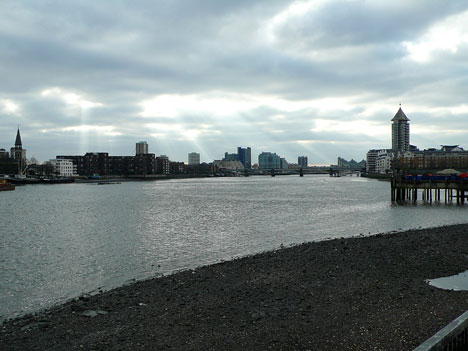 i’ve been taking long walks every day since i’ve been away, but especially since i got to london—it’s the most efficient way for me to get my exercise here. 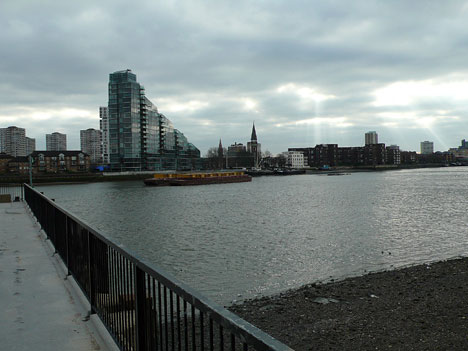 on friday, i finally found my way to the river from alice’s flat, after i misnavigated on thursday and ended up on a more inland route 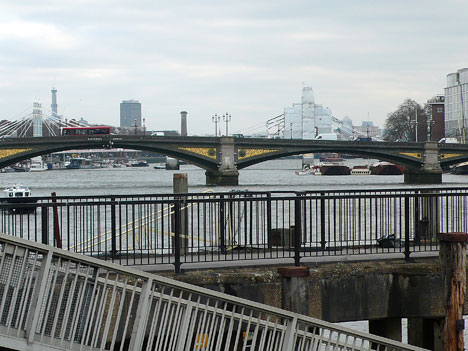 once i got on the right track, i had a wonderfully clear path along the thames from chelsea harbor to the battersea power station and beyond. 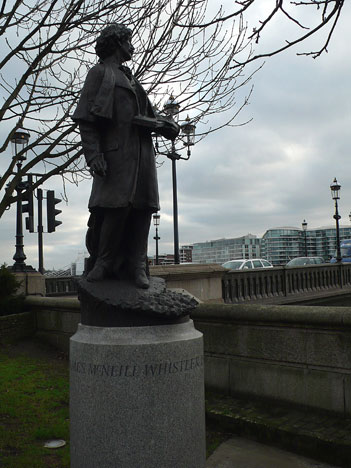 i stumbled upon this statue of james mcneill whistler, one of my favorite painters, tucked into a little parklet next to a bridge. 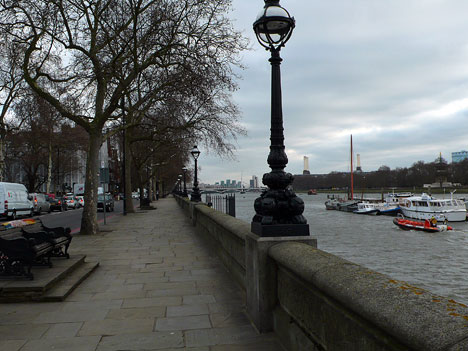 it was a very cold ramble—the wind was pretty fierce that day, but i buttoned up and walked faster in an effort to keep warm (still, the soles of my feet were actually numb in my mesh running shoes, haha). 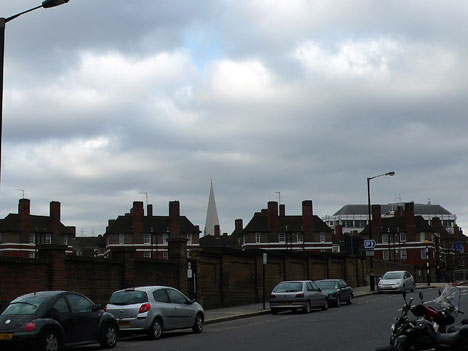 once off the river, i managed to get myself turned around and walked quite a distance out of my way before realizing i might not be headed back to alice’s house (i don’t mind getting lost; it’s easy enough to correct one’s way).

on that day however, there wasn’t too much leeway for wandering—we were headed to cornwall in the afternoon and had a train, then a plane to catch. once i piloted my way home and got my stuff organized, we departed for victoria station. 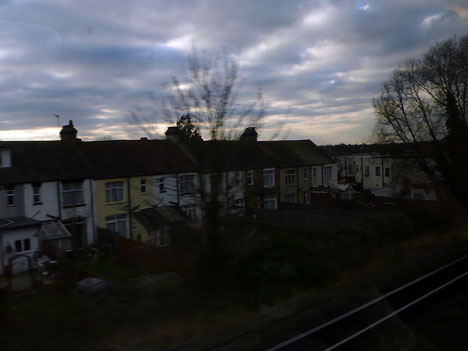 they’re mostly unrecognizable, but quite painterly and i thought you’d enjoy them.

i just love that one; i think it’s my favorite

this one too—they’re kind-of whistleresque, don’t you think? well, maybe not so much, haha. 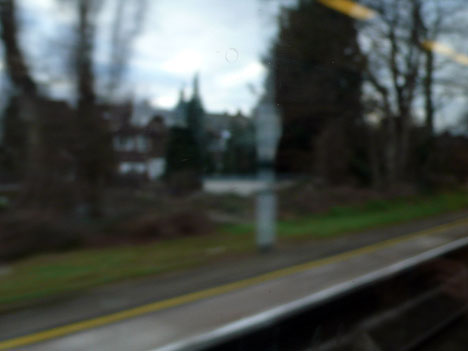 inside the train, we knitted while alice finalized some last minute details 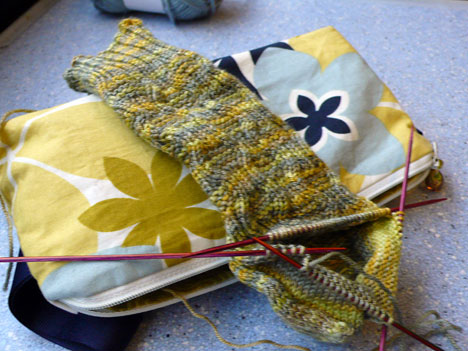 i pulled out my sock for the short trip and finished the gusset shaping. once we got to the airport, we received dire warnings from security officials at every turn about how our needles would be confiscated if we tried to get them on the plane, so i packed all the knitting i intended to do on the flight into my checked bag and snuck on only the sock. 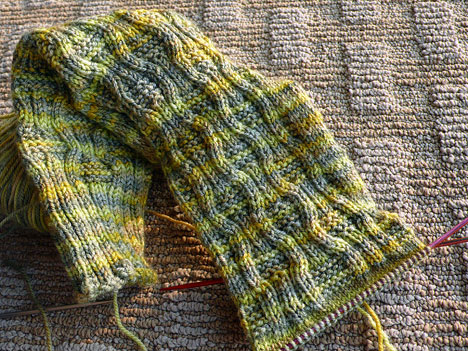 which turned out to be a good thing because i got a lot more of the foot completed during the flight. i’m on the toe shaping now; i may go home this weekend with a completed pair of roger socks—finally. 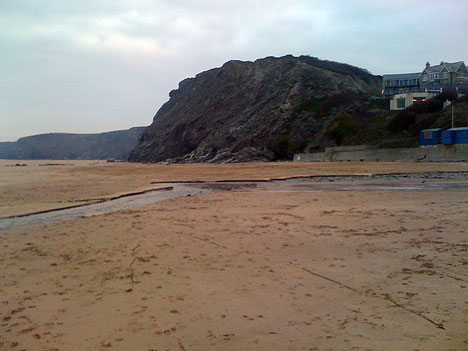 we arrived in cornwall after dark, so we couldn’t see the beach til we woke up on saturday morning, but WOW—what a beach it is and right outside the door of the hotel, too. 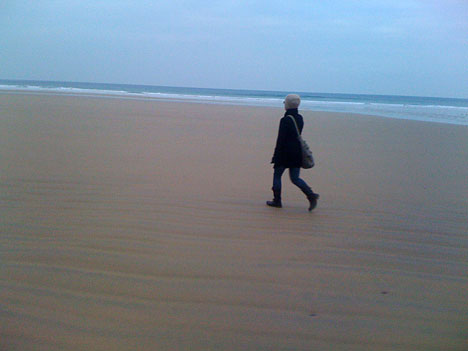 the tide was way out yesterday morning, so cookie and i went for a long walk after breakfast and before class. 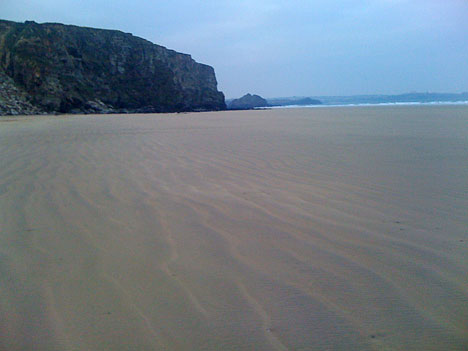 i had only my phone camera on me, but you can see that even with that, the view is spectacular.

we walked all the way down to that notch between the square cliff and that pointed rock formation to its right—the point where we’d have to climb over rocks to go further. the cliffs along the beach are the most gorgeous dark green colors.

about halfway there, we began to see these large, pointed rocks, covered with barnacles, rising up out of the beach. 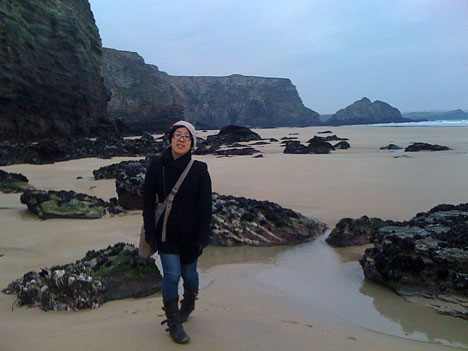 it was ridiculously cold, but we kept going anyway. we eventually got to the notch and found that there were taller rocks barring our way forward. it was time to go back and begin the day, anyhow . . . 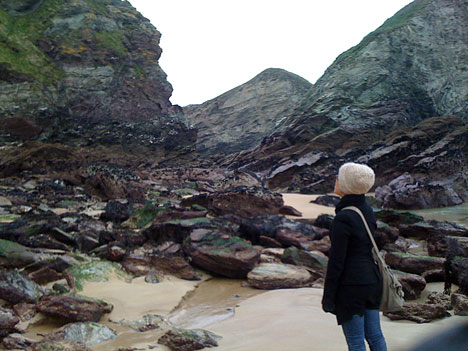 haha, that is we thought is was ridiculously cold, then we turned to head back to the hotel and faced the wind. let’s just say that on the way back, we did not stop or dally about, taking pictures. 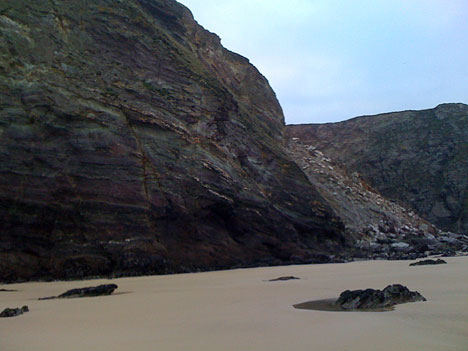 back at the hotel, it was almost time to start the teaching day. i had the unfortunate luck to score this room as my classroom for the day 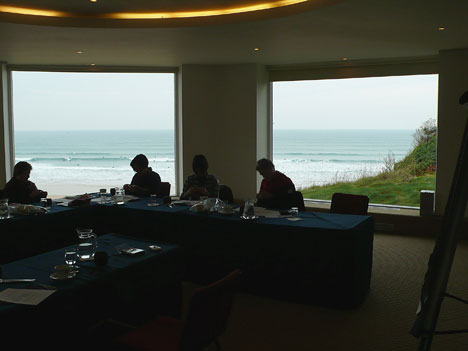 i know—completely distracting, isn’t it??
no worries, though—we made the best of it. 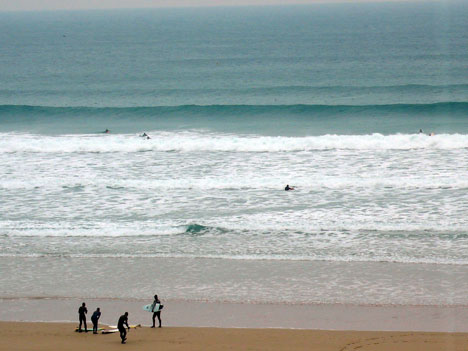 the beach outside the window is rife with surfers, trying to catch a decent wave. 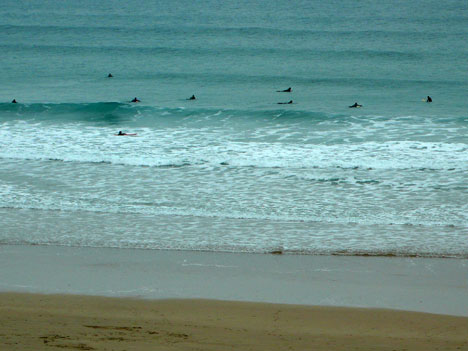 they look like ants on the water, don’t they? 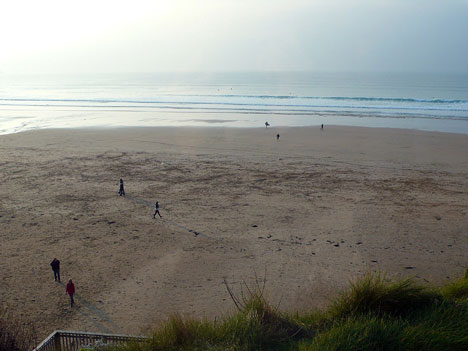 one thing i especially like about this beach is that it is busy all day with people walking, playing, surfing and enjoying the outdoors. 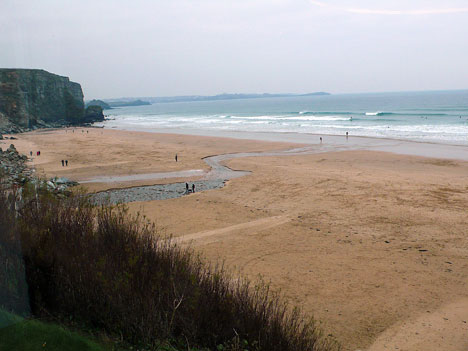 the changing light throughout the day makes for a constantly-evolving picture from our classrooom. 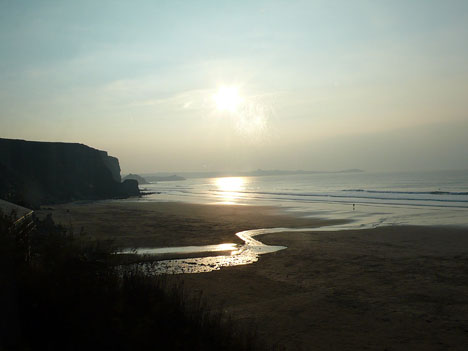 the beach faces directly west, so by late afternoon, we get the benefit of the sunset. 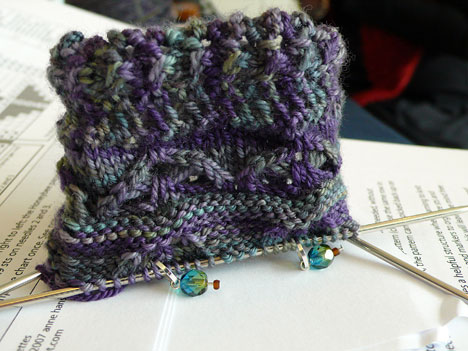 i’m teaching the marie antoinette project class here at the retreat. we’ve split the students into two groups and we meet each group for half a day each day. so everyone got a chance to spend time in this gorgeous room, knitting a sock yesterday.

today we’ll meet again to work further down the leg; some participants may even be ready to knit their sock heels. 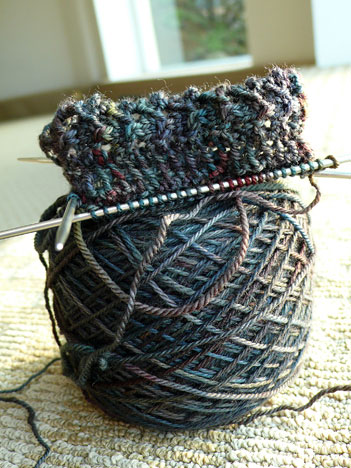 even i am knitting one of these socks—i don’t actually have a sample of the pattern any more, so i figured this was a good opportunity to get one started, at least. i’m using alice’s yarn for this one in a dark, gray/blue/plum colorway.

i don’t know if i’ll finish it, but i’ll try . . . it’s nice to have lots of time to tackle a project class like this, with two days to spread the work out. it gives everyone a chance to spend some focused time getting started and then to have some real knitting time while at the retreat. 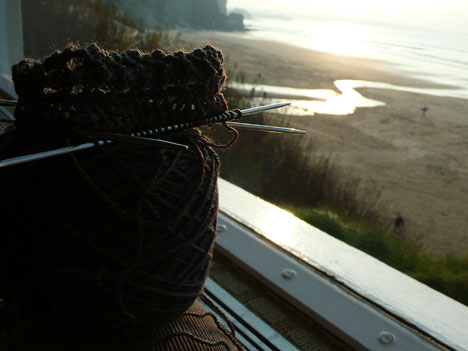 if i don’t finish the sock this weekend, i’ll finish it during some future marie class; it can be my new traveling sock. 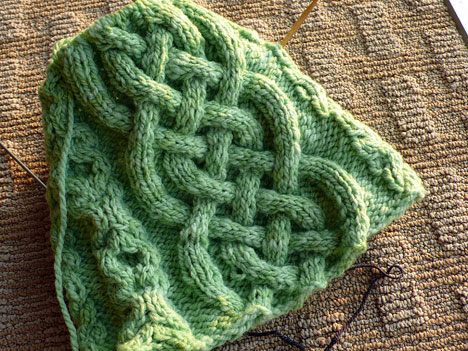 no pun intended but i’m also making goo headway on my green cabled toque in mountain meadow wools merino. mmmm, just what i need for walking out in that wind. just one more repeat and then to work the peak and i’m done.

it needs a wash to relax the cables a little, but i may start wearing it before that, heh—it’s been pretty cold throughout my UK travels and another good, warm, cushy hat is just the thing i could use. 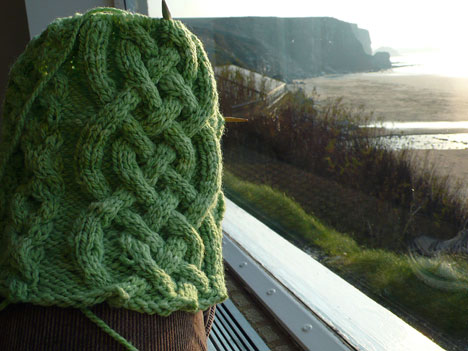 ok, time now for me to head to breakfast and start my day—next time you hear from me, david should have arrived and we’ll be on our way to scotland, i think!