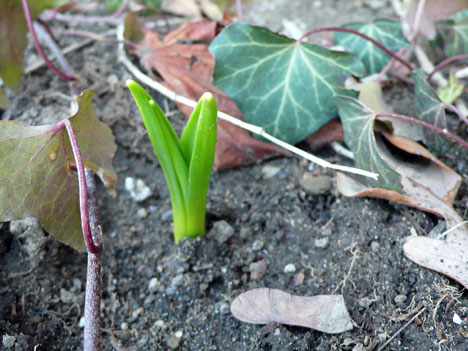 happy spring everyone and what a difference some nice weather makes, eh? the sun has been shining down on us the last few days, making everything feel a little cheerier. 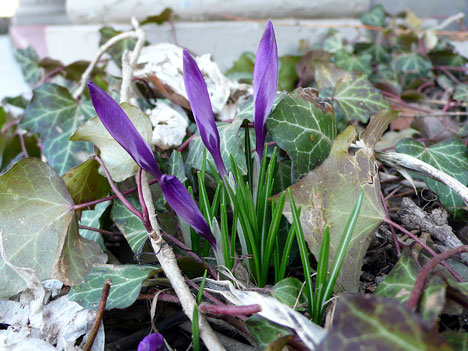 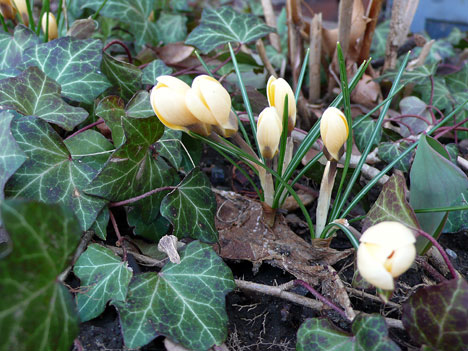 after a bit, when the sun comes over the house to the front, they warm up and open their petals, even more yellow inside than out. 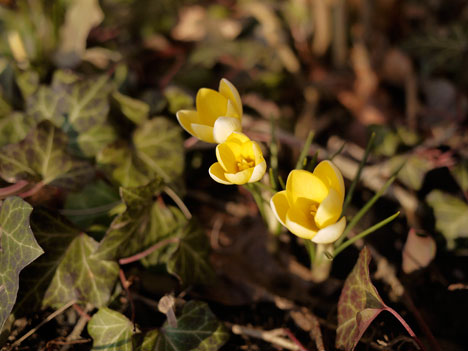 there’s always a surprise or two 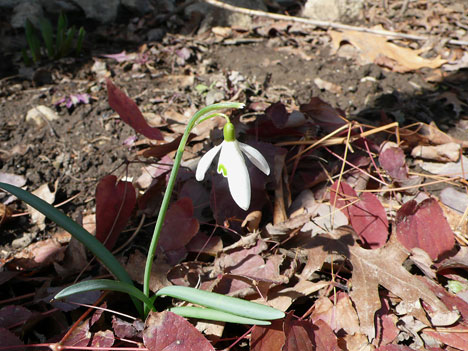 i’m not sure what this is, but we have just one of them each year . . . some kind of freesia or snowdrop, maybe? 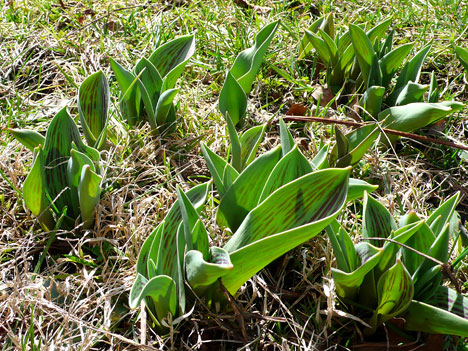 another surprise was how many tulips have poked up in just the last couple of days—the back yard is carpeted with them in patches and more are appearing every day. 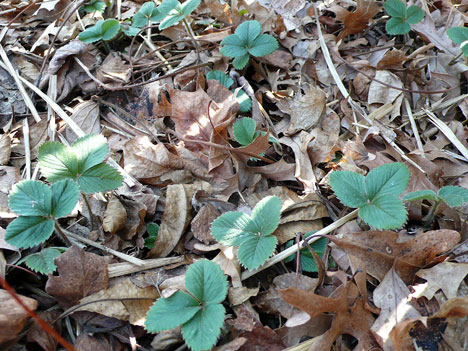 and holy cow—new strawberries plants a-plenty. fingers crossed we have some nice berries this year. it’s our third year and i’m hoping this is the one when the berries are truly sweet. they’ve always been plentiful, if a little underwhelming in flavor. 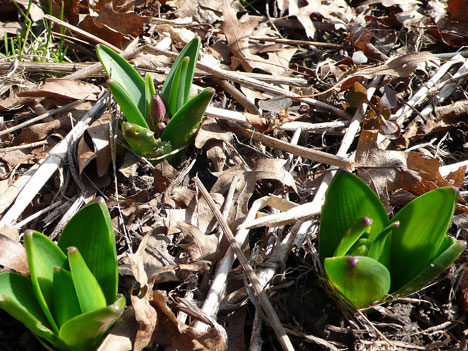 i thought the big hyacinths were coming up earlier in the week, but now i have proof—and something has already been nibbling at them, haha. hopefully it tasted bad and they won’t try each one. 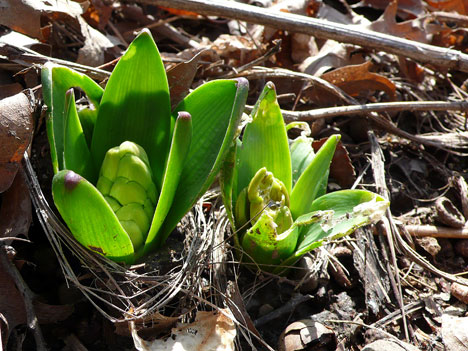 and the daffodils—i can’t believe they were mere shoots just a week ago. 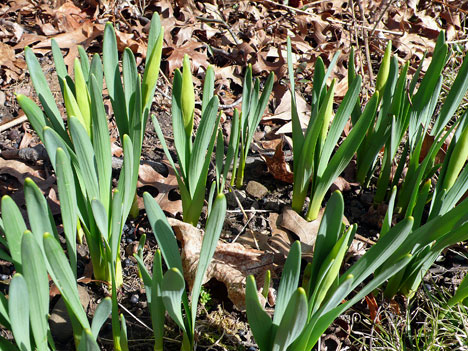 now they are sporting big fat buds. i hope i don’t miss them blooming (i’m leaving for the pacific northwest in nine days; i’m going to miss a lot). 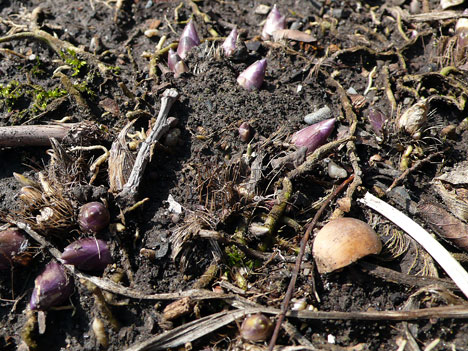 all the way in the back garden, where it’s cold and shady til later in the spring, a small rumblings of the ground waking up are starting to be heard. the hostas are poking tips out of the ground to test the waters and the lady’s mantle is emerging nearby as well 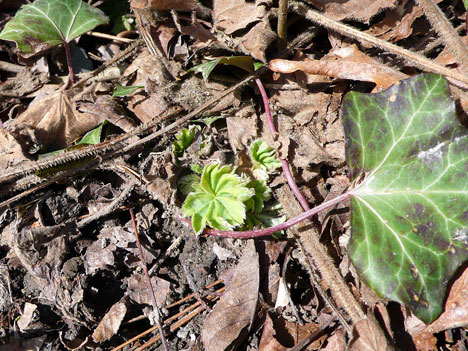 one not-so-nice surprise is that i think i lost my beloved hellebores (lenten rose), though i don’t know how—it just doesn’t seem to be coming back. curious, since it did so well last year after weathering its first winter. i’ll have to look for more of those plants and try again. 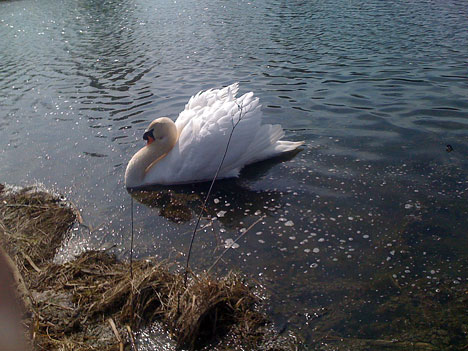 another reason for the return of my good mood is that i’ve been able to get out to ride my bike on a regular basis this week, instead of relying on the exercise bike indoors. i couldn’t be happier to leave the machine behind; i’m antsy to be out in the fresh air. 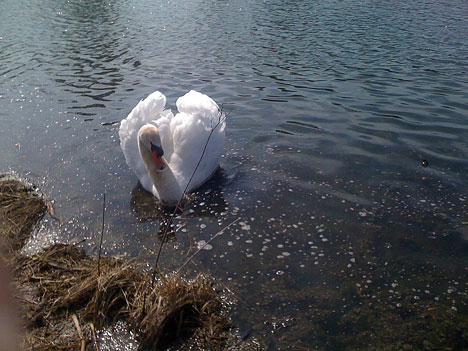 the other day it was in the mid 60s and very sunny, so i took the route that goes by the swan’s pond to see if they were out. yes, they were 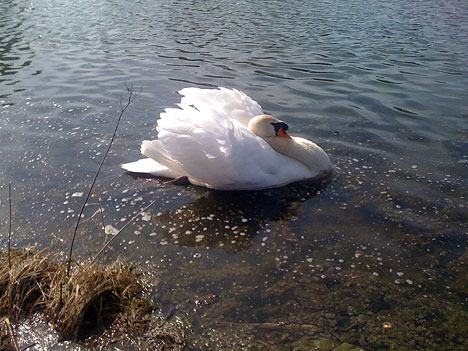 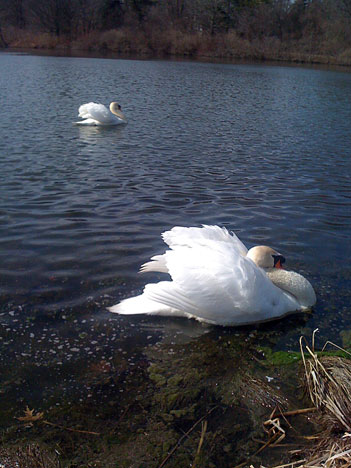 he swam right over when i pulled up on my bike and proceeded to parade back and forth, left to right, the whole time i stood there, haha, while the other one hung back.

it does my heart (and my brain) good to see so much new activity all of a sudden; it puts me in the mood to get organized. i’m actually looking forward to cleaning out my closet and getting some yarn put away this week as a treat for finishing some pattern work up. 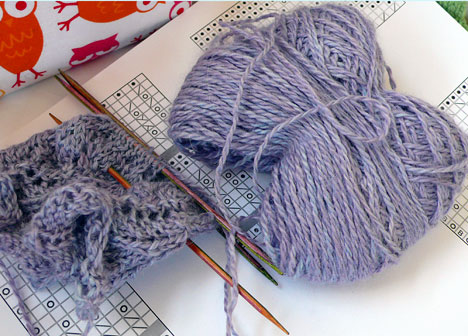 my sock camp class plan is done now; i just have to finish up some samples to bring along. i’m knitting those in leftover yarns from winter projects, such as this lovely slackford studio nimbus cloud, mmm. it brings back very fond memories of knitting the aria delicato scarf.

i’m starting to gather my travel knitting into little piles—why not, right? 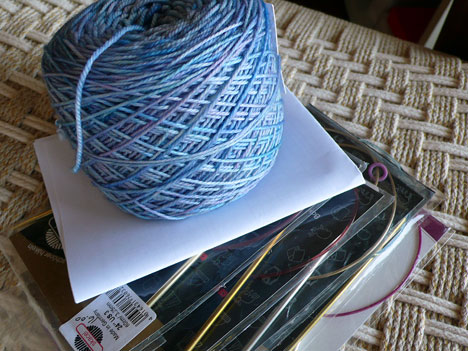 some extra lucent yarn in colorway lady slipper arrived from the woolen rabbit the other day and i wound it up, pulled some needles, and printed out a chart to knit a neckwarmer and scarf during my travels in april, to match the eliza mitts.

i’m working on a good-sized secret project which i mentioned was giving me fits last week. i could not get the same gauge in the project that i got in my swatches; very unusual for me.

well, i decided to trust my scientific method and just keep knitting to see if my gauge tightened up. miraculously, it has (even though i say it’s my scientific method, it always surprises me that it works, haha). anyway i’m very happy it did. the area near the start which is looser than it should be will have a knit-on trim, so i’m thinking that will tighten things up there as well. phew—crisis averted, i think . . . 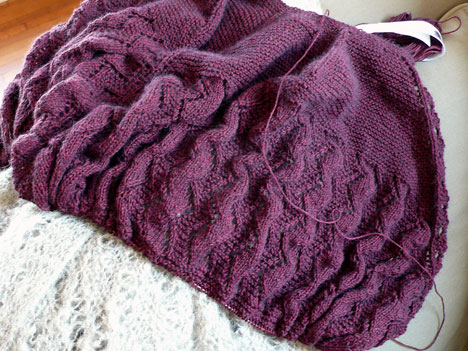 i’m on the very last rows of the crooked walking shawl—literally, i think i have just one and a half rows to go, but i got interrupted yesterday mid-row and have not been back since. 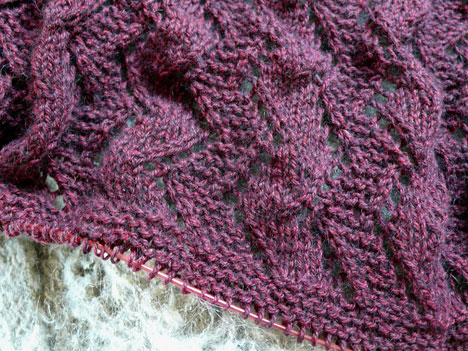 that is to be remedied as soon as i finish up here—i’m dying to block this baby and see how it turns out (i bet the yarn is going to be awesome once it’s washed). the pattern is written and with the test knitters and proofer now; it will be ready for release pretty soon. 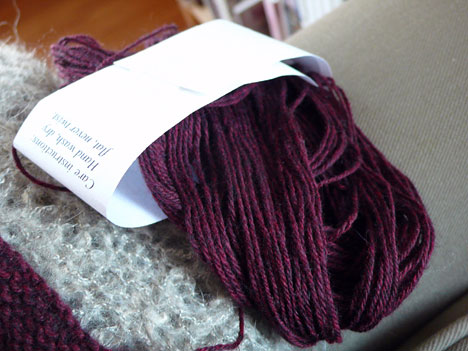 as you can see, i’ve used just about every bit of the second skein too; i’ll have just a few yards left when all is said and done.

yep, i’m looking forward to settling in and maybe chatting with cookie while i finish. in fact, that thought is getting might distracting—i think the time is now. waddaya say, are you about ready for some knitting too?