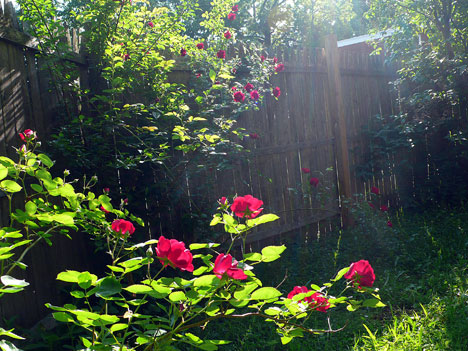 it’s june alright—the rambling roses are covered with vibrant blooms. red is not my color at all for clothing, but i’ve always liked it—after all, cherries and strawberries are red, what’s not to love? 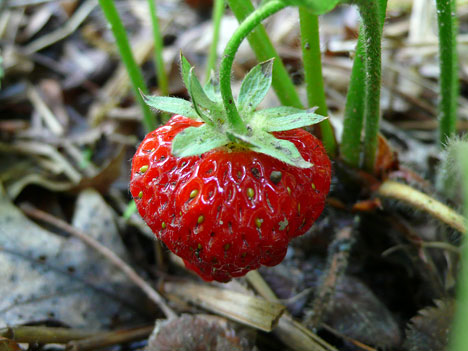 yes, our berries have begun to ripen; with any luck they’ll hold out til romi arrives on thursday night and we can all sit down to strawberry shortcake when she gets in. 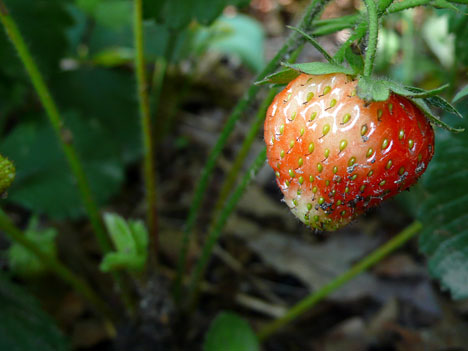 she’s traveling to ohio to attend TNNA with me and beckie. in an unusual breach of tradition, janel and cookie will not be joining us this year (pout) and so we won’t get to use the strawberries to celebrate janel’s birthday, like we did last year. 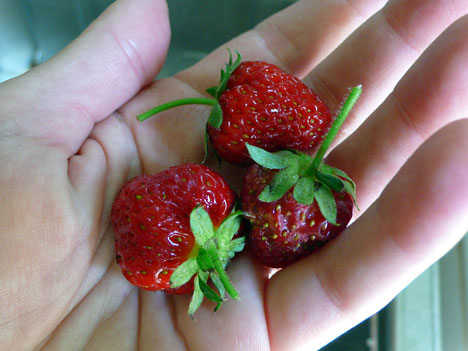 actually, i got a pretty good head start on that today, with these ripe ones i found while taking photos. mmmm. 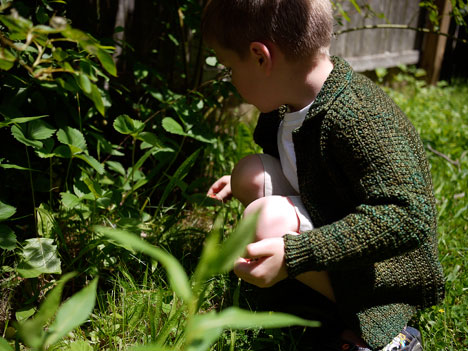 and later this afternoon, kian came over with beckie for a photo shoot and because he just loves to pick red things in my garden, i let him have run of the strawberry patch at the end our work. 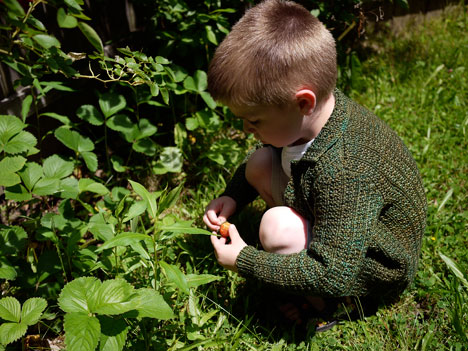 sure enough, he found found a bunch to eat as well (he’s not quite as fussy as i am that they be perfectly ripe). 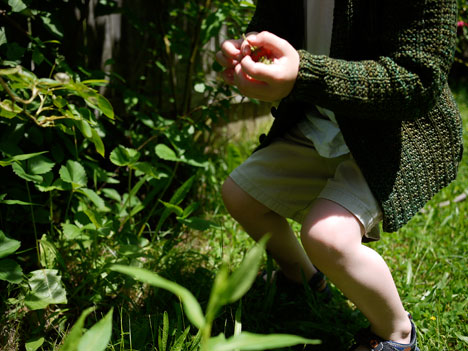 the weekend has been kind of a mixed bag—i got a bunch of stuff done that i didn’t expect to get to, which was great. on the other hand, several tasks which i thought would be done by now are still awaiting my attention. ahem. 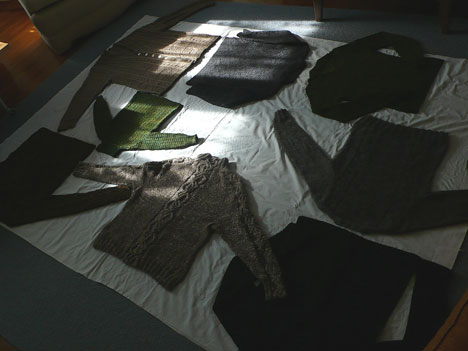 laundry is never high on my list of fun weekend activities, but i do enjoy the process of putting my woolens to bed for the summer. it takes just the right weather to get the job done efficiently and i’ve been keeping an eye out for the perfect days to do it. friday was breezy, dry, and sunny-warm, so i loaded up the first batch—neutrals and greens—ran them through the handwash cycle and laid them out on the living room floor with the porch doors flung open. they were dry by the evening, but i left them til saturday just to be sure. 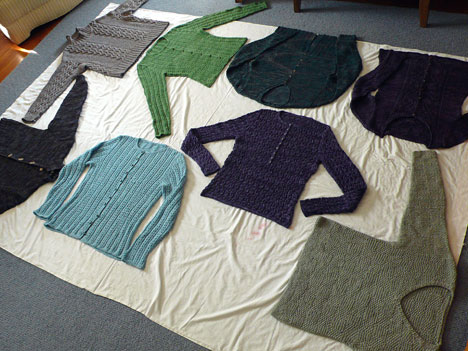 last night i did the blues and while it’s still breezy and warm, the air was a little muggier overnight, so they have a bit more drying to do; they’ll probably be ready to put away in the morning (i don’t like to leave them out too long right now because they’re also collecting pollen while they lay about. 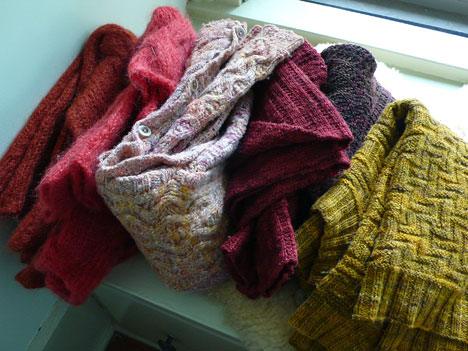 and finally, the reds are laying in wait for their turn. once those are done i can fold everything away in the cedar closet with lavender and patchouli sachets in between until fall . . .

so that job is well underway, even if i didn’t get as much yard work done this weekend as i thought i would. i’m going to have to squeeze that in over the next few evenings, i guess; we can’t let it go too much longer. 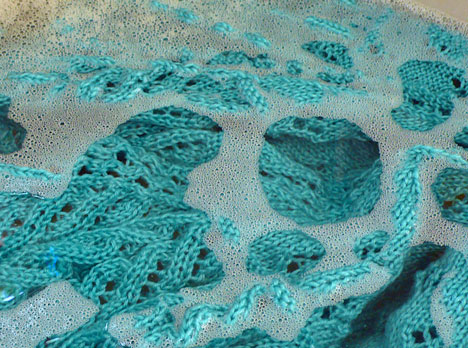 yesterday morning i went to knit at debby’s house and got so far along on one of my secret projects that i was able to finish it up last night while we watched TV (ok well, yeah, i did stay up til 3am to do it, haha).

today i soaked and blocked it AND i found out that it’s not really necessary to keep it a secret any longer, woo-hoo. 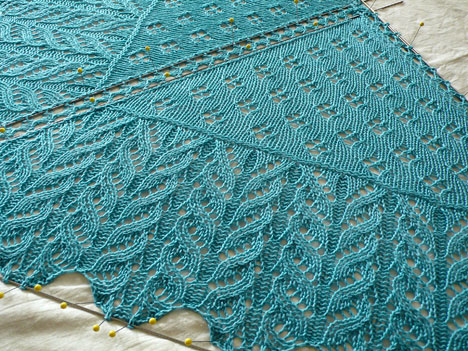 it’s a shawlette that will be part of the kollage feed your creativity series. knit up in kollage creamy (you know how i like that yarn), colorway turquoise sea. 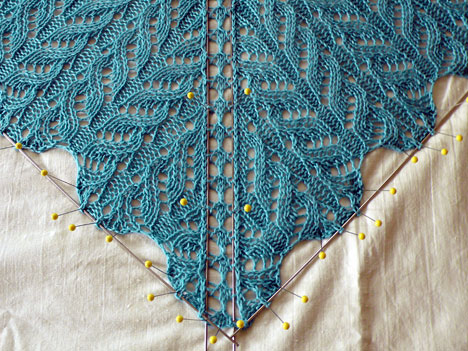 the kits for the series will arrive in yarn shops next july and similar to the leafprints shawlette, the pattern itself will be available from kollage through patternfish well before then (we’ll let you know when). 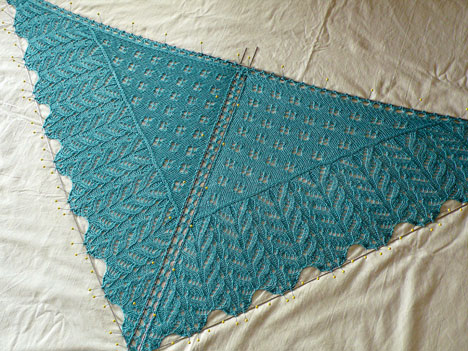 and, there’s the money shot for you. now i just have to write up the pattern (something else i meant to start this weekend which is now pushed to tomorrow’s schedule, sigh).

while i was puttering around in my workroom winding yarn yesterday, i came across a bobbin with some laceweight yarn on it that i spun at the retreat earlier this month and forgot to wash up. this is the yarn we made on the first day with some commercially processed polwarth. 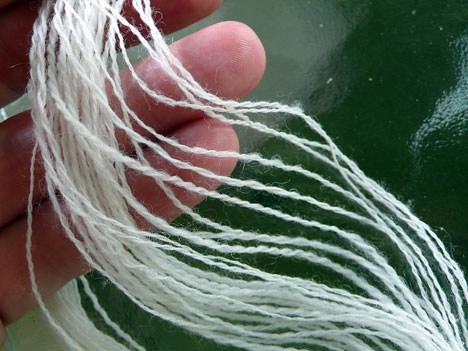 onto the skeiner it went—i have about 110 yards of true laceweight here; enough to make a pair of lace wristlets, such as elm leaves or something similar (hmmm, maybe something to match little iris, eh?). next it got a nice bath in warm soapy water and i hung it up to dry. 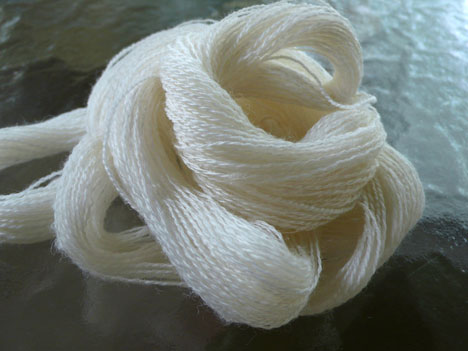 now it’s waiting for me to have a little free time.
(HAHAHAHA!) 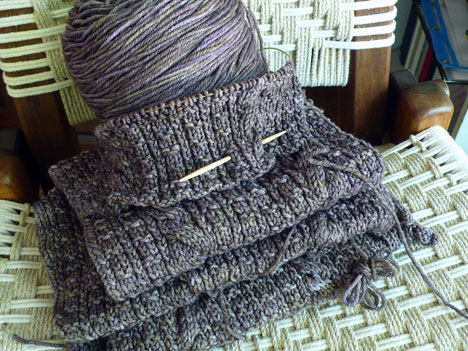 with a little focus, i added one more to my pile of finished cable-and-rib sweater pieces last evening. not wanting to sit back on my laurels, i immediately started another piece and got through the hem section to the point where i have to change needles. this puts me in a great position to take it along to TNNA, where i can work on it rather mindlessly while i visit with colleagues in the evenings. i may even be able to get it to the underarm or further that way by next week, who knows?

BTW, david has chosen a name for this sweater—rené. he says it just came to mind when he was looking at it. and since the pattern will include unisex sizing, i also like that the name has a female variant, renée.

ETA: david just told me that wikipedia says that the name rene means “reborn or born again”, which is perfect for this sweater, as it is a remake of his old, worn out version of the same design (see my christmas post for the full story). 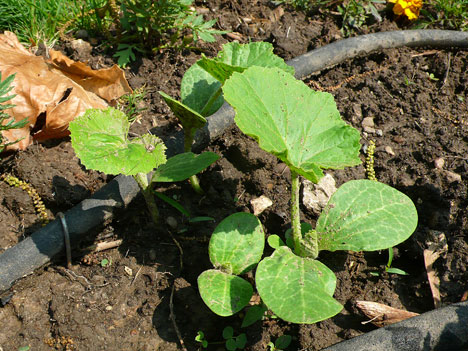 we wrapped up the weekend by working together in the garden for several hours in the late afternoon and evening today—time to get the mulch down before the weeds start to take hold in a serious way. 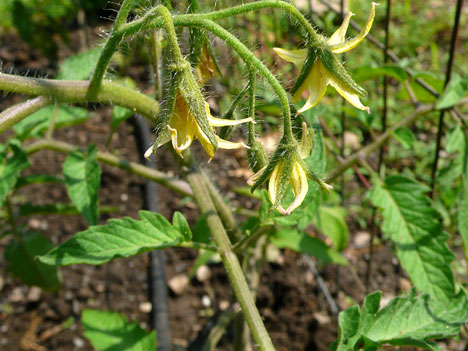 we also needed to get the tomato cages up before the plants get any bigger—they’ve been steadily growing since they went in but are now at that point where they are poised to increase in size geometrically. i pruned and david got the cages positioned first. 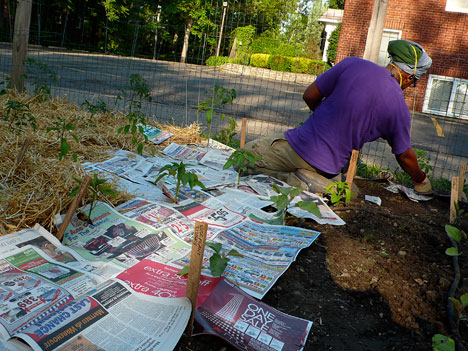 then he put down newspaper while i followed with a thick layer of straw. conditions were optimal for the job; the evening was cool and windless, while the ground was still damp from last night’s heavy rain. we worked steadily and got everything covered that we wanted to just as we ran out of straw. 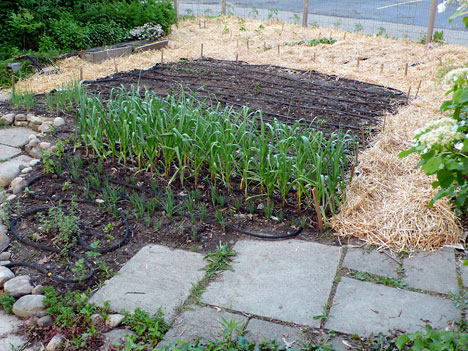 we need to do a few more rows where the carrots and parsnips are germinating, but they are so pokey that we’ll have to wait a bit to see exactly where they come up. and we still have to decide how to manage the potatoes—they need hilling throughout the season, so mulching probably won’t be a good strategy for them. in fact, once they get to a good size (and that happens quickly), they’ll form a canopy that will serve the same purpose, so no worries . . .

i also finally got my ornamental pots planted with a variety of colorful, shade-loving annuals, such as coleus, begonias, and impatiens. i’m all caught up on the planting as of now, but as i said earlier, don’t look too closely at the weeds i haven’t pulled yet . . .

and now it’s time to relax and have some knitting and TV, i think. tomorrow’s another day and i have my work cut out for me it seems. 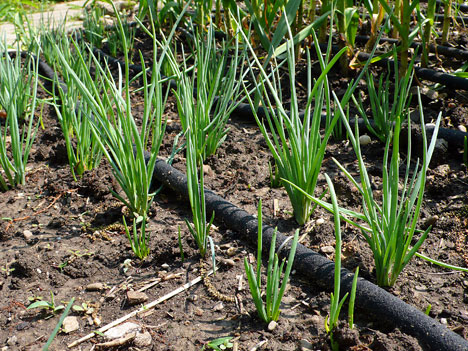 (ps: the shallots were decidedly victorious over the squirrels—so far, anyway)

28 thoughts on “the color of the week is RED”