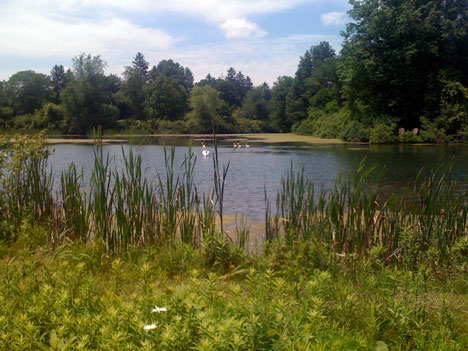 after a solid 7-10 days of rain, we finally had some beautiful summer weather yesterday and as i headed out on my bike, i decided check in with our swan family. they’d been keeping a low profile all during the previous week and i hadn’t been able to get good pictures from my vantage point on the roadside.

and even on my first pass by yesterday, they were not in sight, though i saw that two blue herons had taken up residence in the same water (and maybe that accounts for the hiding swans). but the second time i winged around, there they were, sailing along near the far side of the pond. 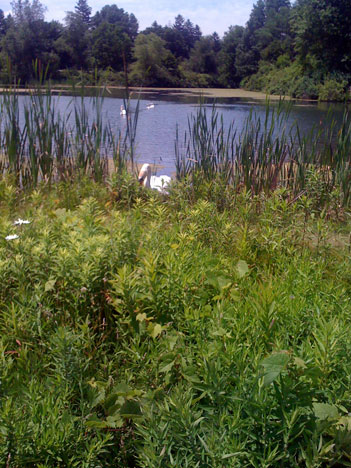 almost as soon as i stopped my bike, the daddy swan headed my way. i don’t know if you can count them all that well, but there are indeed, just four youngsters left in the family and the daddy seems even more protective now than he was when they were tiny. 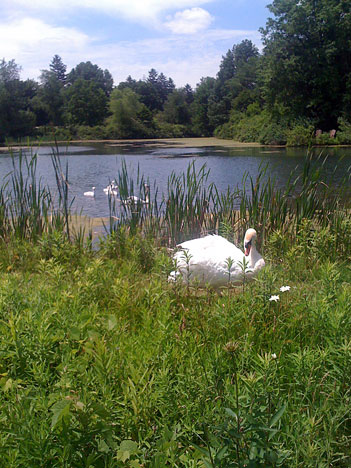 he set up a firm stance between me and the water’s edge as the rest of the family headed over (see, they really do want any food you might be throwing their way, but they don’t want any of the risk associated with it).

it’s not that easy to get in close anyway, now that the grasses, weeds, and wildflowers have grown up so much around the water. 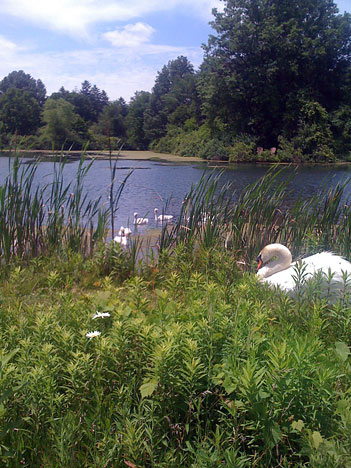 and there they are—this is about the best angle i could get on them from where i stood, but you can see how much they’ve grown since the last time i photographed them. 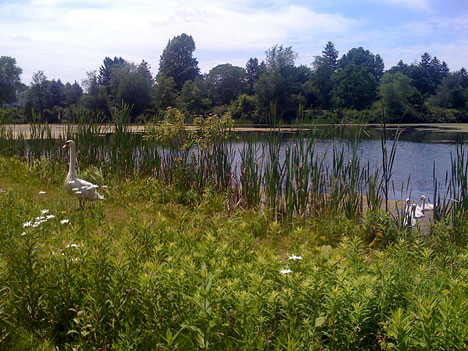 pretty soon, the mom came up on the bank too, leaving all the babes in the water alone (but under the circumstances, what could be safer?). she poked around for a few minutes and preened a bit, but then skedaddled right back to her brood.

i’m trying to keep up with this family during the summer because i’ve been sending a little photo journal to my nephew amad (AKA our favorite junior sock appreciator) every week or two, to keep him up to date on our life here in ohio. (i love writing to the kids; james and i used to do it when he was a boy and i still have all his letters, haha.) anyway, it’s a good way for amad to practice his writing and keyboard skills and he just LOVES getting email (we do both written and electronic).

since it wasn’t as sunny or warm as expected, i spent a lot of time this weekend catching up the bookkeeping and finishing a secret project, accomplishing quite a bit on both fronts. in fact, the secret project is off the needles, washed, blocked, and on it’s way to its destination, which means i am down to just two or three current projects (well, besides the second socks that are languishing, but they don’t really count, do they?). 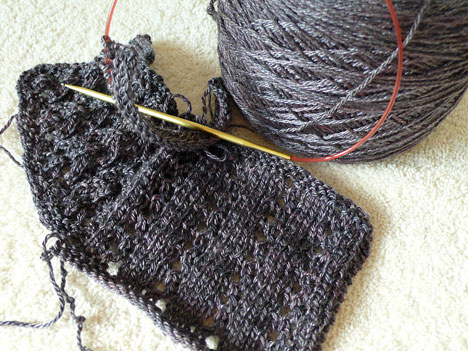 which means that last night, i felt very much ok with doing some more exploratory swatching for the sprossling redux (we have got to figure out what to call it!). right now, i’m just trying a bunch of stitch patterns to see which one looks best when washed and dried. i’m concentrating on smaller, openwork rib patterns with lots of soft elasticity, like the original fabric. but i’m wondering if i should consider a solid fabric rather than openwork for this “new” spross . . . hmm.

anyway, that’s sort of my treat right now—if i get a bunch of knitting done on my other two main projects, i allow myself knit a swatch in sea pearl.

my sweater progress stalled temporarily when i got so close to finishing that secret project; i just can’t stop when i’m so close to the finish on something. now that it’s done, i’ll be back on this front piece which only requires about two hours of work to finish, maybe. i’ve actually missed working on it—there’s something to be said for knitting along in worsted weight yarn, haha. 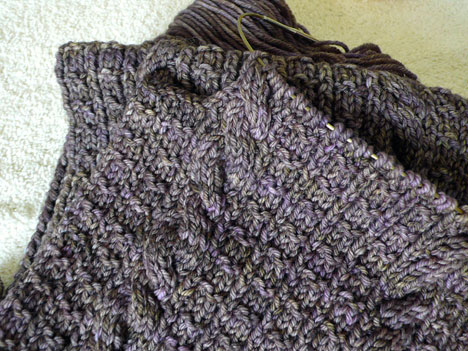 and i gotta say, this woolen rabbit grace is especially delicious—i love the way it glides through my hands, making beautiful stitches without any effort on my part.

i left off at the armhole shaping, just about at the point where i’ll need to start the neck shaping. once this piece is off the needles, i can cast on for the back, which is the last piece. 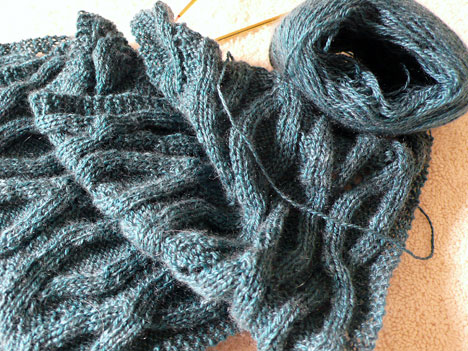 i’m not doing badly on the sweet georgia cashSilk scarf—i knit a couple more repeats in class yesterday afternoon and a couple here and there last week. i broke down and measured it this morning and it’s about 28 inches long. since this yarn grows almost 50 percent in the blocking, i could stop pretty soon, but i’m probably going to knit to the end of the skein—no point is having a little ball of leftovers, when the lusciousness could be around my neck. 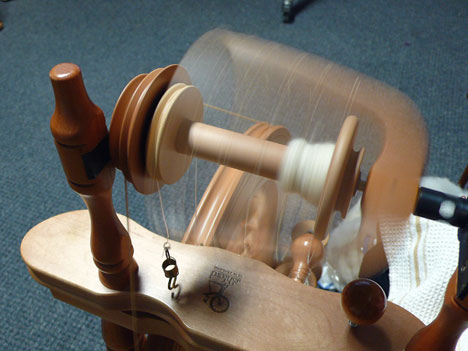 last night we had a change-up in the class schedule and the spinners piled into the house almost as soon as the knitters left. now, “spinning class” is one of the highlights of our week—it’s really more of a spinning free-for-all, for one thing, haha. though we do manage to get some learning accomplished as we go, it’s usually an accident. and since they appointed themselves the knitspot board of directors, it’s gotten even more hilarious and out of hand. 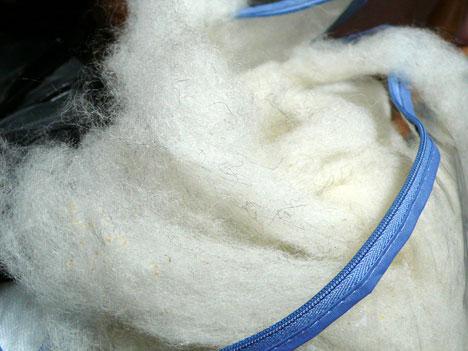 which isn’t to say that we don’t get any spinning done, not at all. in fact, we are all signed up for the tour de fleece, spinning on team superfleece. we actually didn’t discuss our goals for the tour, but maybe they’ll list theirs in comments. or you can follow us in the team superfleece ravelry thread.

barb, the most prolific and productive spinner in the room by far (she recently spun yarn for and knit up fingerless mitts for each of her seven high school girlfriends. we hate her.), is working through a batch of shetland that she bought at wooster last year. the fiber is really nice and soft, but unfortunately, chock full of VM, which we didn’t see when she bought it.

so barb is learning with this project to let go and not allow the rustic inclusions get to her. she is picking out the worst of it, but trying not sweat the small stuff—literally. 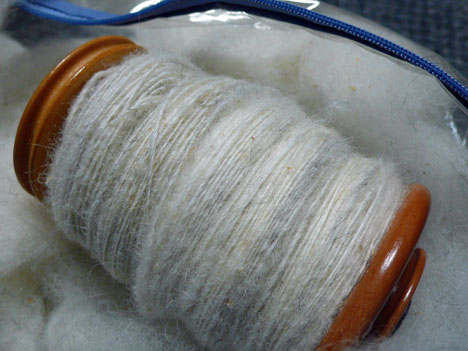 and she’s doing a fine job (really, this is a huge step for barb). we keep assuring her that a lot of the junk will fall out and that the rest will soften up and eventually disintegrate out of the yarn (it’s true, it will . . . some day). since this yarn most likely won’t be worn next to the skin anyway, it will be fine.

and anyway, just look at how beautiful it is—that glow. that’s the beauty of handspun farm fleece.

susan is still spinning the lorna’s laces “black purl” fiber that she’s been working on for some time, but she wants everyone to know that she’s almost done—for real! soon, she’ll have four bobbins of singles to ply up. 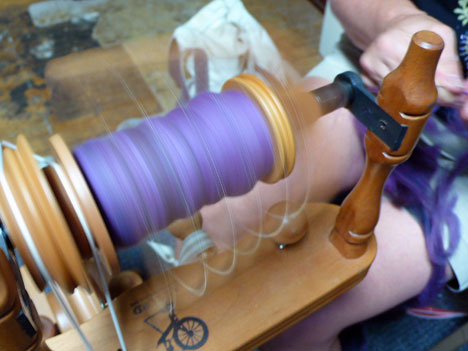 last night she was working through an especially light section of the fiber, which for the most part, is a very deep purply-charcoal. 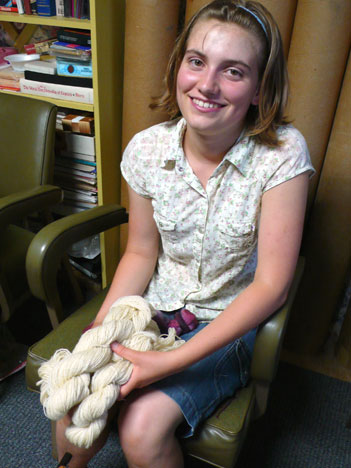 helena’s having a very busy summer, between babysitting, participating in a shakespeare production, and helping us out with the club, but she still managed to ply up three more skeins of white yarn this week, to add to the pile she’s building toward a sweater quantity. 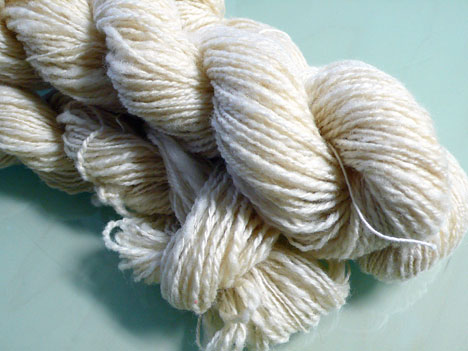 a lovely soft, DK yarn that she’s hoping kris will knit into a cabled sweater for fall/winter. although who knows, she might just tackle it herself—after a hiatus of several years from knitting, she took the plunge back in this week to knit with her small cousins and has cast on a stuffed cat project. we’ve all got our fingers crossed that it will stick. 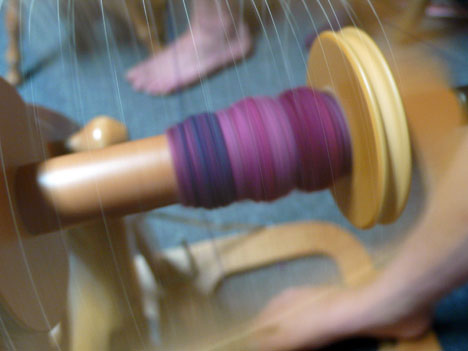 for a little change of pace, she decided to take a temporary break from the white fiber to spin up a bit of the dyed fiber that chris from briar rose gifted to her at wooster (chris, that was SO sweet of you!) 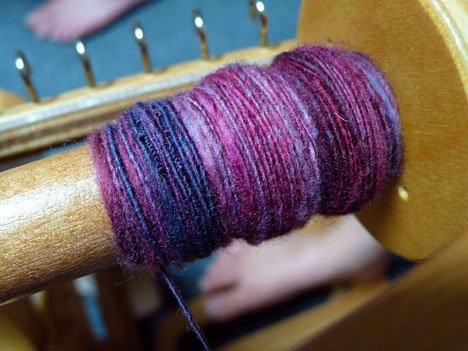 chris always keeps a big bowl of tiny-sized bumps in her booth; for a buck or two, you can try something new without committing too much. helena bought a big bump of BFL (briar rose BFL is exceptionally lovely to spin!) and when chris realized she was helena-from-the-blog, then she gave her some samples.

anyway, this one wasn’t labeled but we think it’s her cormo. she also got some polwarth and a bit of merino, too i think—all of it lovely.

well, this was helena’s first time with a color fiber and i think she fell just a little in love—i’m sure you know what i’m talking about. for all of us, it’s just so fun to watch, reminding us of our first spinning and how everything was new. sigh! 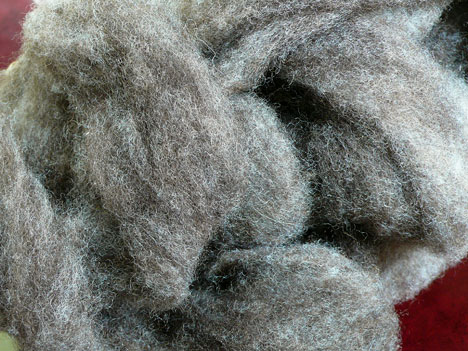 i continue to work away on my finn fleece that i purchased a couple of years ago at wooster with anne marie (hers has been spun up for a year). this fiber is extraordinarily difficult to photograph—the fuzziness of it disperses light all over the place and confuses the camera’s focus, so it doesn’t know where to look—i’ve yet to get a great picture to show you, but trust me, it’s nice fiber.

i’m working on a 3-ply DK yarn and i’m a little less than halfway through my fiber supply, which was under two pounds. 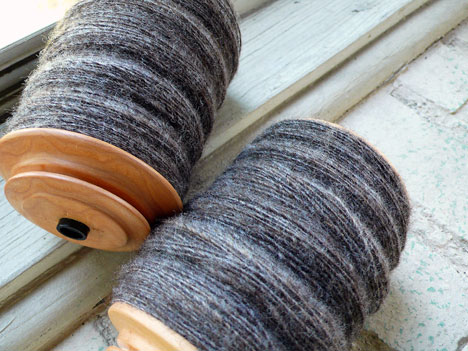 last night i finished filling my second large bobbin with a fairly thin singles. i honestly have no idea how much yarn this represents, but hopefully, a lot. because i don’t know that i have enough fiber to fill six of these, which might make enough 3-ply for a sweater.

no use speculating though, when i have no clue whatsoever.

my own goal for the tour de fleece is modest: to spin more frequently than usual (once a week), possibly a little each day. since our spinning class won’t be meeting again til august, i may even take my schacht up to our TV room to spin while actually WATCHING the bike races.

this would be a big change of pace for my spinning. normally i only knit while i watch TV of any kind and traditionally, my tour knitting of choice is a big lace edging project, finishing a little each night until it’s done. but this year, i don’t have a knitting TdF project—i didn’t manage to coordinate an edging event this year, so i may just do my spinning instead.

until the 12th that is, when i leave the country for the remainder of the tour (but who knows, maybe i’ll get some spinning time at knit nation).

ok, now i will share a little secret with you . . . just as with my knitting, i have a a spinning swatching project that i’m dying to start, but i’ve been withholding until i get further along on my finn fiber.

this is a cloud sampling of the grand champion coopworth fleece that i split with jocelyn at last year’s wooster festival. you can see that the fiber is simply gorgeous.i’m dying to spin up this sample chunk, but i’m using it as a carrot to get ahead on my finn (cuz that strategy worked so well in my knitting this week).

sigh. i was in my fiber closet last night with helena and about twelve items literally jumped off the shelf, wanting to be next. the avalanche made her laugh, but it made me groan . . . oy, i’m so behind.

ok, i gotta wrap this up now—david just came in with twenty pounds of blueberries from a local farm which he’s bagging up for our freezer. if i’m quick, i just might get a bowlful to shove in my mouth, mmm