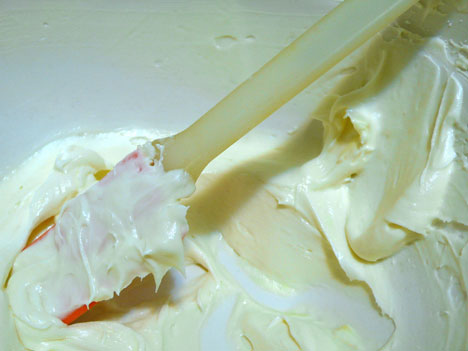 when debbie wrote following my last post that her husband had just baked a scrumptious version of carrot cake for her birthday which also included beets, i was sold—since we happen to have carrots AND beets that can be dug up fresh in just a few minutes, that tipped the scales for me.

saturday dawned sunny and brilliant after weeks of dreary, rainy weather here in ohio—not for us the snows of the east coast; at least, not this weekend (though i’m sure we’re due fort our share). i took a few hours off in the morning to knit with debby and susie, then headed back to my kitchen to cook my brains out til andrea arrived in the evening. 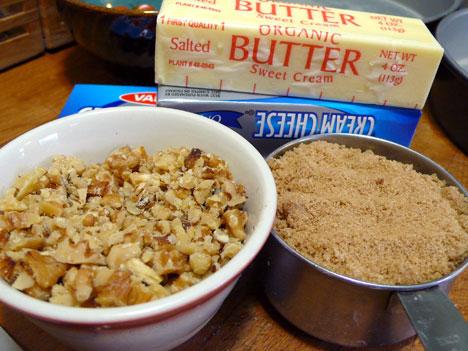 after digging up the carrots and beets i needed and scrubbing them clean, i grated, shopped, and stirred the ingredients into a nice thick batter—which was the oddest shade of pinky-red. i’m kicking myself that i don’t have a photo; it was actually kind of off-putting, but i had it all put together now, i wasn’t going to stop there. and i trusted gary’s recipe to steer me straight. 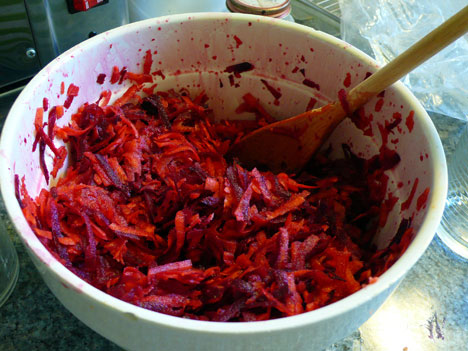 into the oven it went and i got busy with roasting vegetables while it baked.

we’d had a light frost the night before and we were expecting more, i know it’s time to get as much in from the garden as we can—hence the focus on cooking with root vegetables right now (plus, it’s finally cold enough to let the oven run for hours at a time without blasting us out of the house).

our potted plants and trees were moved onto the porches last week and the more tender plants are now inside.

some root vegetables can stay in the ground a little while longer, but i asked david to pile them high with the straw bedding that lay unused now between the garden rows. he worked out in the yard all afternoon while i cooked; we waved to each other once in a while through the kitchen window, hee-hee. 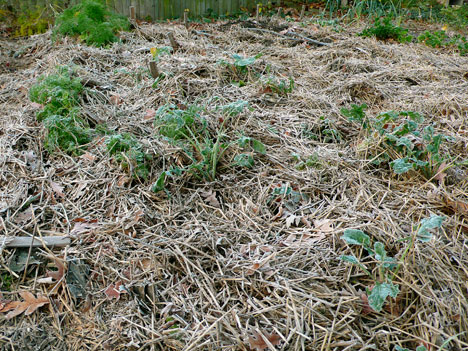 now the carrots, rutabaga, and potatoes lie under a cozy blanket of straw and if it does snow, that will be the eiderdown on top to insulate them further. i’m keeping them this way until we use them up. otherwise, i don’t really know how i’d store them. my plan is to cook as much of them for freezer storage as i can, hopefully before the hard freeze comes. 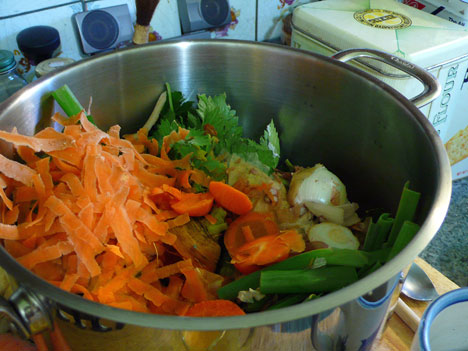 back in the kitchen, i peeled and chopped some more, this time in chunks to be roasted. the cleanings went into the stock pot; it’s an extra step that’s so easy, it has become automatic whenever i cook in quantity. we never lack for good vegetable stock this way.

i will confess that i spent way more time in the kitchen than i’d planned—all that cleaning of produce and prep work took hours longer than i thought. i was still cooking when andrea arrived around 7:30, but thankfully, down to the final details. 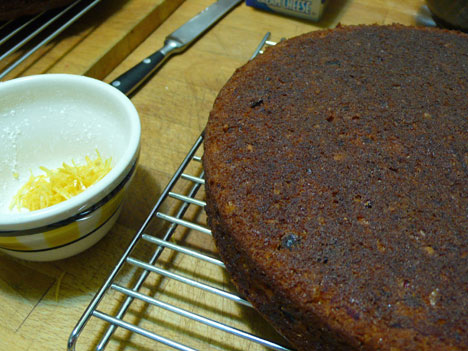 i was relieved to see that the cake layers came out of the oven the normal carrot cake color—kind of orangey-brown, phew. there were traces of grated red beet, but nothing of the bad valentine frosting color that was the original batter.

by the time i had dinner in the oven, the cake layers were cooled and it was time to frost—this is the perfect kitchen job to do while chatting with a friend and drinking the fine belgian beer she brought along—ask me how i know.

i wanted to try the candied lemon zest that was recommended in the recipe so i minced my lemon peel, dusted it with 10X sugar and set it aside to dry.

then i beat up the cream cheese frosting and put it all together. at that point, i kinda wished i had a photo of the chef’s original cake; he said to use walnut halves and candied pineapple which sounded very festive, but i was talking and chopped up the nuts without thinking, so mine probably looks a little less pretty. 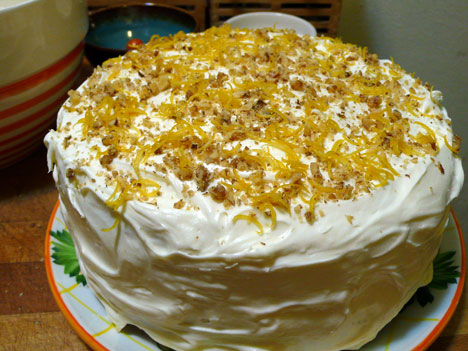 no worries; the taste is what matters, right?
and i was confident by now that it was going to be a good one. the cake was placed at the center of the dining table so we could admire and anticipate it while we ate dinner. 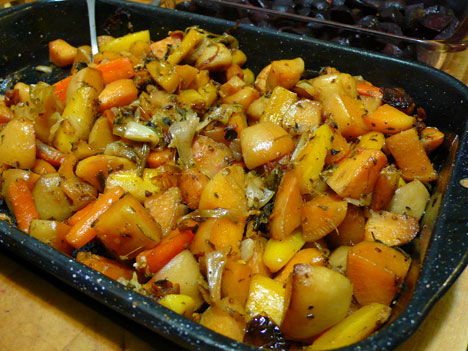 our dinner was really, really good, if i must say so myself. we had salmon with roasted root vegetables (carrots, rutabaga, leeks, onions, garlic, sweet potato) laced with herbs and good olive oil. 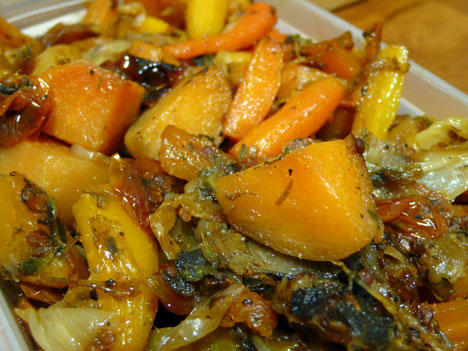 i don’t even think we need smellivision to translate that for us, do we?
and that isn’t yet the best part . . . we had roasted rosemary potatoes as well—also fresh dug that day. 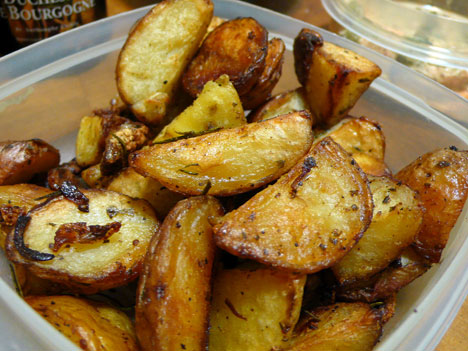 and i’m here to tell you—until you’ve eaten this dish, well, you just haven’t lived; it’s heaven on a plate.

because i had a fellow beet lover in the house, i indulged us once again by roasting up the last of the garden beets 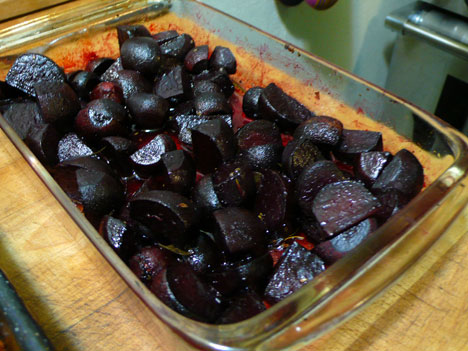 there was plenty of everything to eat with lots left over to freeze for a future meal. i’ll probably repeat the roasted veg dish a couple more times before thanksgiving.

it would have been really easy to go back for seconds and overeat a bit on all the goodness, except we had one more course to do that job with 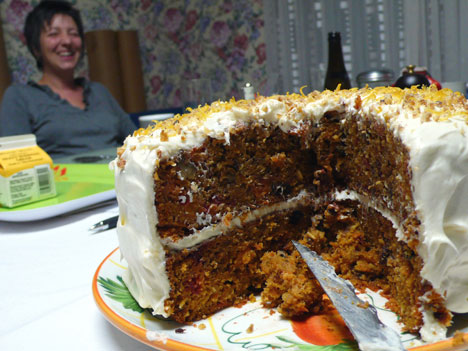 (andrea is cracking up because i’m so diligent about getting blog photos at every step of the way, but i really want debbie and gary to know how much i enjoyed and appreciated their recipe)

see what a nice color it turned out? this is also a mighty BIG cake—at least six inches high. that’s the other thing i varied from the written recipe—it called for three 8-inch pans, but i baked it into two 9-inch ones. it would be even taller if i’d done three layers. 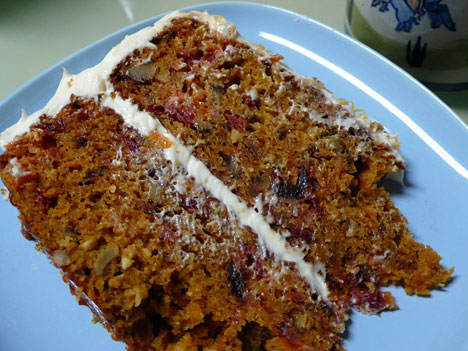 and holy moly—it was so good. it’s incredibly moist and not too sweet, with a nice complex blend of flavors. andrea and i loved it; she says it’s the best carrot cake she ever ate. david said he could still taste the beets; i guess you know how he felt about that. for me they were very faint and well, i like beets; to me they taste sweet. 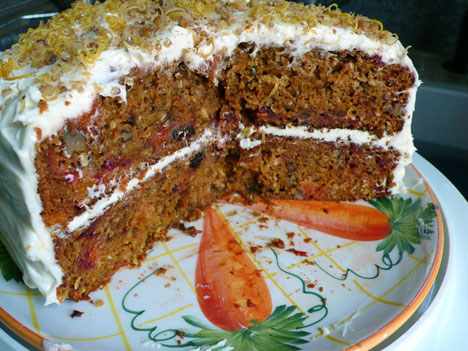 in the daylight this morning, it’s even better looking i think (and yes, i do have a carrot cake plate; how very martha of me! mine has a chip though, so that keeps things real for me) 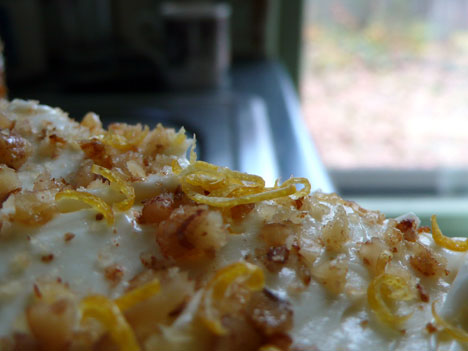 i can’t say enough about the brilliance of the candied lemon peel—so fresh and unexpected; just what the frosting needs. 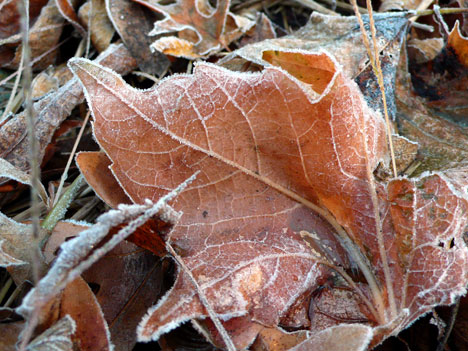 speaking of which, we woke up this morning to 25-degree temperatures; when the day got light, it was apparent that the world outside had acquired its own heavy layer of sparkly frosting. i grabbed the camera and took a walk in the garden before it all disappeared 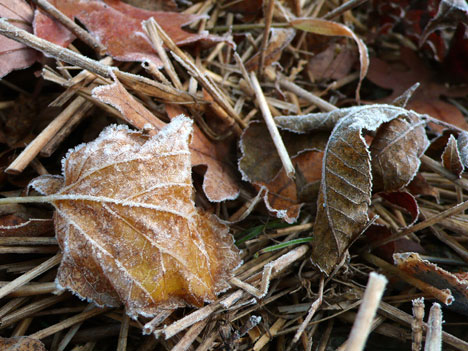 we’d had some light rain the evening before, just a smattering i think, but it was enough to gather in some places—like these pepper leaves 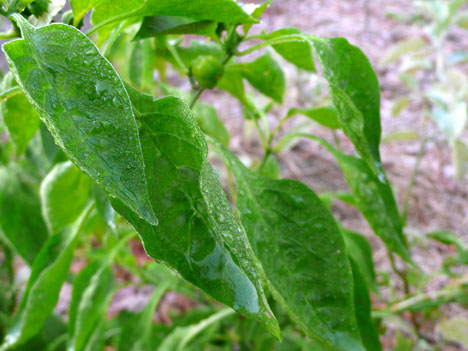 where it later froze in its tracks as it beaded up into drops and dripped from the edges. 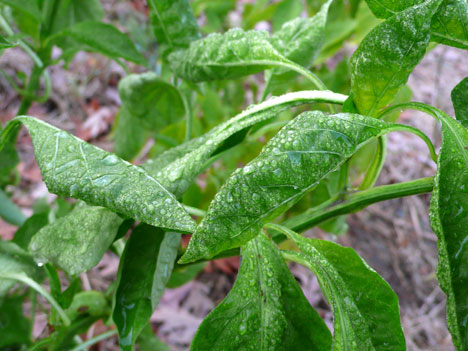 the rutabaga greens had a pretty allover surface frosting as well. 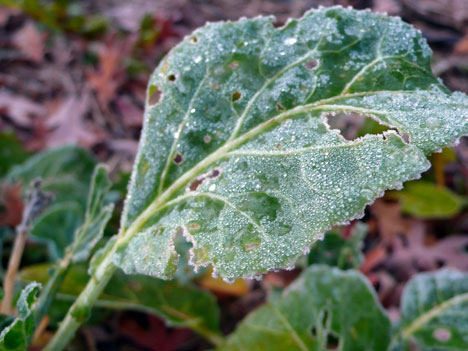 and good thing the garlic graveyard we created last monday 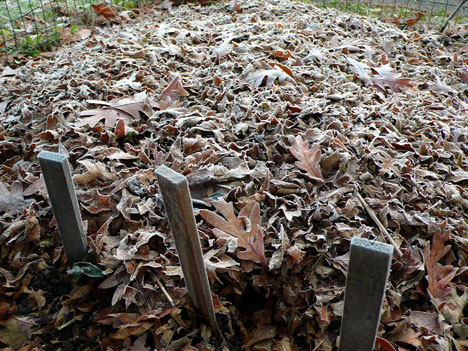 has a nice blanket of leaves on top. that part of the garden got hit most heavily; it was stunningly pretty and eerie looking. 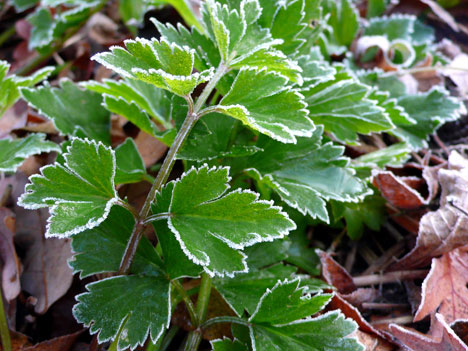 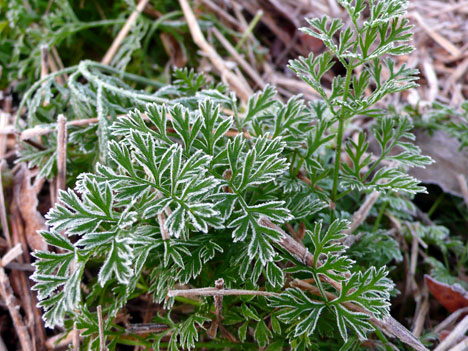 a bright white rim around every single little prong of each leaf. so precise and pretty against the dark green. it seems as if it should be more haphazard than that, doesn’t it?

brrr, it was cold, that’s all i know.

after lingering over shop talk and coffee, andrea took off for home and i set to work on some things around here. i had finished my susanna bandana shawlette; after a few last tweaks, it was finally off the needles.

i decided to block it this morning before doing anything else.

the rewritten pattern worked well, but we all ran out of yarn on the bindoff—NOT good. so i ripped back 8 rows and bound off there instead; this will provide 25 yards or so of “padding” in the yardage requirements. 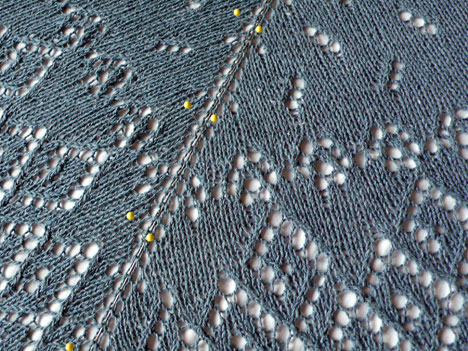 i love the yarn—kollage riveting—it is nice and soft to knit with and blocks out beautifully, with a genuine denim look.

i love it in the storm blue; what a great color. i’m convinced that it will look fab on david; i hope he’ll wear it. i know he’ll at least wear it for a photo shoot, so you’ll be seeing it then. 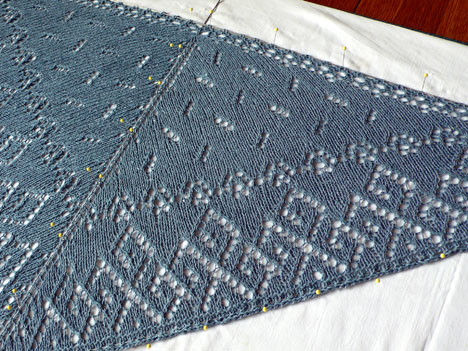 it’s not quite dry yet, but the surface feels nice—i’ll need to compare them side by side to know if it worked. 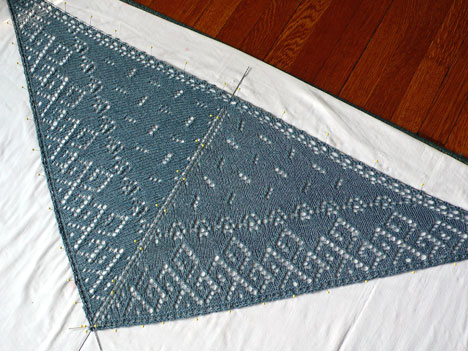 erica tells us that the pattern will become available on patternfish in november, after the kollage spring photo shoot is done. we’ll be sure to let you know when that happens.

i feel very satisfied with this project and i’m glad it’s now complete so i can move on to something new.

what that will be, i’m not sure of yet. i have a couple more secret projects to take care of before year’s end and i’d like to get another sweater on the needles. gift knitting season is nearly here, and i’ll need a few fun, quick-knitting patterns to be prepared.

i’ve got some ideas . . . which i need to finalize this week so i can get some projects on the needles and into travel bags before my next trip.

now to end this post, i have a very special announcement. our dear friend kat, who is one our dynamic moderators over in the fall in full color clubhouse, has just released a book on kindle. 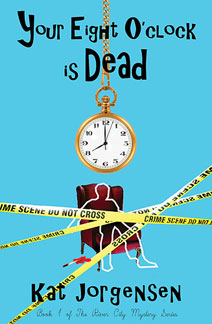 your eight o’clock is dead is just the first in a fun-filled series of mysteries that kat has planned. i haven’t started reading it yet (i’m still hoping kat will record an audiobook; hee-hee, she has a great voice), but kim tells me it’s hilarious, so i’m looking forward to it.

i’m just so happy for her that she published it—it is, ahem, the frosting on the cake of a very excellent weekend.

and with that i’ll say good night—you know what tomorrow is, right?
stay tuned; there will be pictures . . .