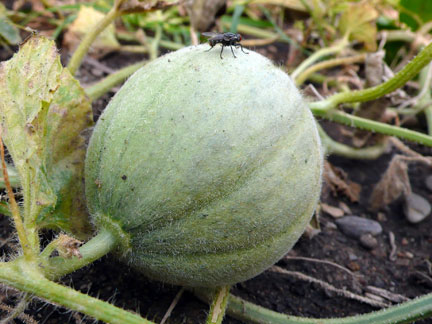 in the “everything is new again” department, we have canteloupe. if it doesn’t cook right on the vine (we’re having 90-degree afternoons this week), it could freeze in whatever drastic turn of weather could possible be coming next (and really, it could be anything this year).

everything out in the garden has a new crop coming on; you can see that there are plenty of dying-back vines, and yet there is new growth among them. i know you’ve seen all these same photos ALL summer long, but the light is so seriously gorgeous at this time of year i am helpless in the face of it. my finger just twitches to snap one shot after another. 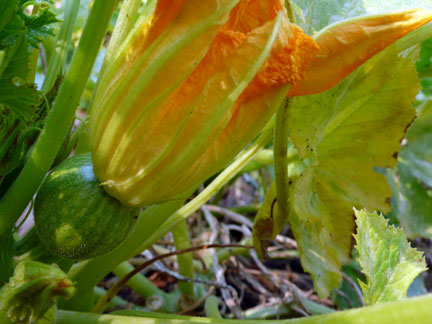 so i’ll try to sneak in just one a day (ok, it might be two on days with less knitting content. plus a closer. hehe, just kidding.).

and in the “everywhere i look, i see purple” department 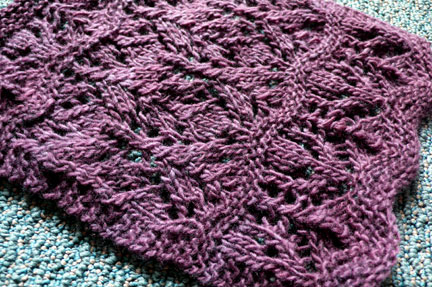 actually, it was not a good day for getting the best photo of the yarn color which is much deeper and blue-er, and certainly nothing like this 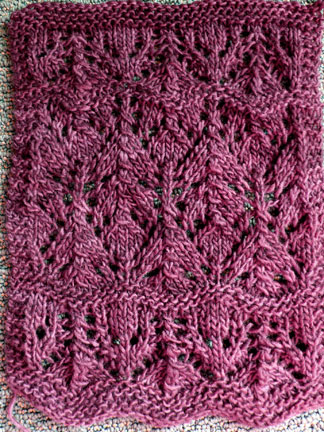 which i photoshopped as much as i dared and still ended up with maroon.
but we are just looking at stitch patterns today, and only two of them, too!

i like this combination a lot . . . it’s handsome; it has a stoutness in the patterns that i want in a cold-weather piece. i love the garter stitch borders; they add depth and framing to the stitches like a cozy house around them.
i would even hazard to say that this combination qualifies for manLace—i can totally see it thrown carelessly over and aran-and-kilt combination.

of course, that kind of daring can only be pulled off by the manliest of Men.

speaking of cozy, i don’t know if the photo translates this or not but the yarn is unbelievably soft; another reason why there should be garter—for the squish-me factor. it’s sort-of like malabrigo but with a bit of a felted surface that makes it even better. it feels like slightly fulled cashmere. if i could give you anything right now, it would be virtual-groping-and-fondle-vision

i think i’ll do three repeats of the thistle head stitch for the bottom borders, with the remainder of the wrap body in the thistle leaf stitch. simple and strong.

the eggplant says, “bite me”.

28 thoughts on “just swatch me”