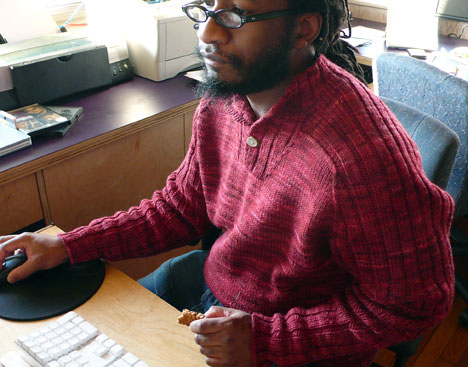 david’s new red christmas fatigue sweater, knit in briar rose charity, a 100% corriedale worsted weight yarn, colorway cranberry. i based the design on the EZ seamless hybrid, and plugged in my own detailing and numbers for a custom fit.

and of course we both have chris to thank for taking the time from her busy pre-christmas schedule to custom dye this luscious stuff into just the right shade of holiday cheer.
thank you chris! 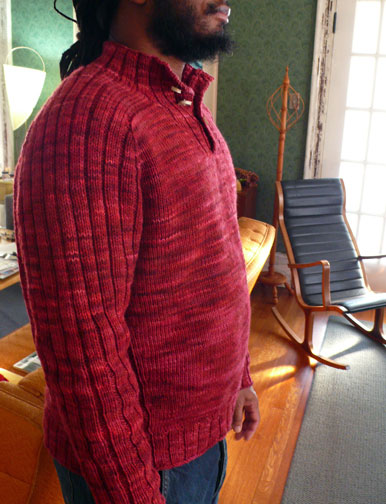 (see what i mean about the tapered body?)

i love knitting for david, and have been making sweaters for him ever since our first winter together, when i realized how much he craved and enjoyed handknits (never mind that silly boyfriend curse stuff; he will stick around if he loves you, whether you smother him with handknits or not). he seemed to ferret out whatever i had around my house that would fit, and then wear it every chance he got.

“well, the handknits are just better,” he’d say in a talkative moment. if pressed, he’d elaborate, explaining that the fit, particularly for socks, was simply not equaled by store-bought clothing.
my kinda guy, right?? 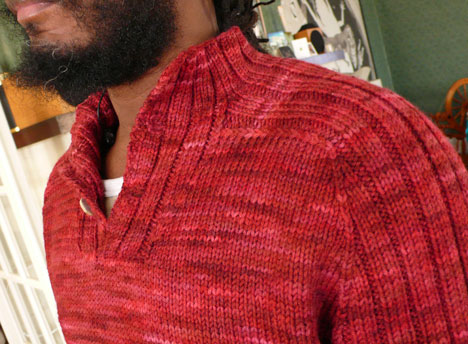 i wanted to make him a sweater for our very first christmas, but only came up with the idea about 10 days ahead of time, and still needed to purchase yarn for it. at that time, there were only a few yarn shops in NYC, so i had to send away to patternworks for what i wanted. it arrived only a couple of days before christmas, and i can’t knit that fast, so i wrapped up the yarn, needles and pattern and presented the box to david on christmas day.

i can’t even describe the horror on his face as he slowly pulled back the tissue surrounding the yarn. he tried hard to hide his shock as i beamed.
i explained the time issue and that i couldn’t make a christmas deadline, but would work on it in the new year. finally, with a quiet cough and great relief, he said, “oh—i thought my “gift” was that you were going to make me learn to knit.” i knew not to force the issue . . .

those materials became the old red sweater we have been laughing about this month, for which this new sweater is something of a replacement (i knew i was kidding myself about getting him to discard that old rag when he said the other night that it is his—ready for this??—after hours sweater. heh, yeah, i knew you would appreciate that one). 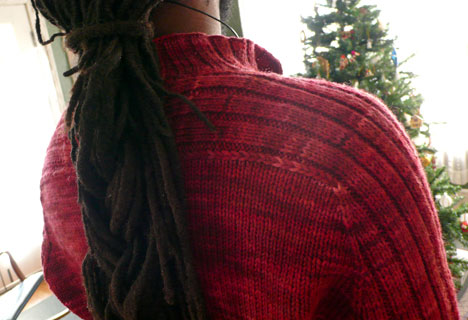 the next sweater i knit him was the cream cabled one that everyone so admired in this photoshoot, though it was not knit as a christmas gift. i worked on it all through the television coverage of the giro d’italia in may, 2000 (it was hotter than hades that year, i remember).

the yarn in that piece has an interesting story though. we had been shopping at patternworks (back when they still had that giant store up in poughkeepsie, a fun day trip from NYC); david was always willing to take me for a drive up there and we did so several times a year to stock up on supplies. most of the time he’s sit in a corner and listen to music or look at patterns, happy to give me all the time i needed to shop (usually all day . . .).

after we got home, he mentioned that he always wanted a fisherman-wool sweater, and i said, “oh too bad—when we were at patternworks i saw a 2-pound bundle of that wool in the sale bins; it would have been perfect, and it was the right amount too. oh, darn.”
and then i promptly put the thought out of my mind, assuming it would be gone by then.

a few days later he came home with the very bundle in his messenger bag. he’d called the store, asked them to locate the yarn in question, purchased it, and had it mailed to him at work.
ni-i-ice.
i agreed to marry him shortly after—i mean a non-knitting man who can hunt and forage yarn??
you don’t let that go. 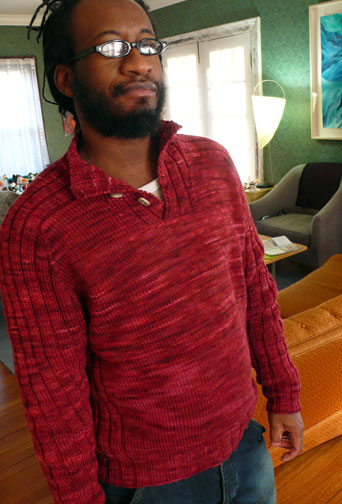 since then i have made him a sweater for nearly every christmas. in 2001 there was a moss-green cardigan knit from cashmere we bought in florence, italy while we were on a biking trip there in 1998. i had a plan to felt the sweater slightly when it was finished and i almost didn’t do it, but it wouldn’t have fit (the felting step would make it wider and shorter, and i had calculated the finished size accordingly). that idea was inspired by some DKNY felted cashmere pieces i saw in loehmann’s; why i was inspired by that craziness, i have no idea.
so, i took a deep breath and ran it through the wash. all was well . . . it fit perfectly afterward.
(i don’t think i’d try that one again though—too stressful a decision in the end).

then in 2002 there was a plum crewneck in a beautiful herringbone stitch that was a real challenge to incorporate the shaping into, but it turned out well and he loves it. 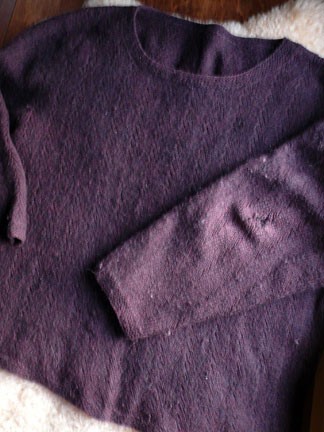 so much so that i’m afraid this one will soon go the way of the old donegal tweed sweater.

in 2003 he got a fairly plain gray crewneck . . . in a very subtle stitch pattern chosen by himself. it was a real yawn to knit, but he obviously gets a lot of use from it. 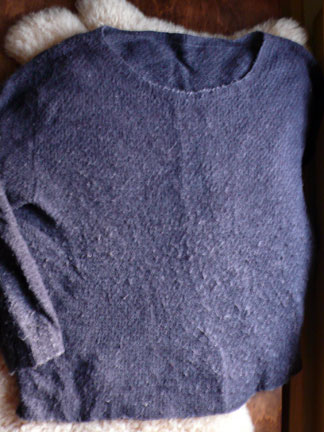 the yarn choice may have been unfortunate, being a tad too delicate for the job of housing a man that Works in his sweaters.
he inherited another sweater from me that year that i’d knit for myself in a rib which looked too small on the needles, and which i made bigger, only to find that, indeed much as i’d like to be, i am no arnold schwartzenegger, and i do not need a sweater that size either. 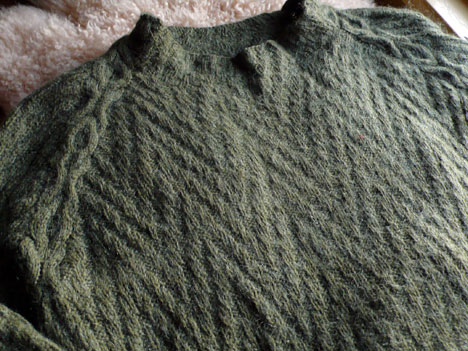 in the fall of 2004, he started leaving pictures ripped from jaeger yarn ads about the place for a certain zip-front cardigan with jeans jacket detailing. no elaboration on his part—just the photo. at first, i didn’t get the connection, so i tossed the picture back in the trash, but when they re-appeared, this time right at my spot on the coffee table, i got the hint. by then i’d learned to spin so i bought the book and used some chestnut alpaca/romney handspun to knit it up, completely in secret. he was totally taken aback when he opened it. in fact, he wore it last evening at our dinner party.

next time i make a zip-front, i will order a color-matched zipper from one of the wonderful internet sources that now exist, and which i know about thanks to the online knitting community i now belong to.

that was actually a big year for sweater knitting around here—i didn’t have a blog yet, i was out of work for 4 months in the winter, and i’d learnt to spin. YOU do the math.
here’s another one that materialized very quickly in the space of a week or so—nothing special in design but the yarn was landscapey and wonderfully variegated with all our favorite natural colors. 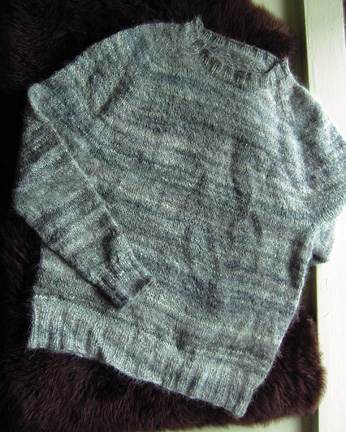 two years ago i made a real quickie after i’d finished all my christmas knitting with about six days to spare. i hadn’t planned on knitting david a sweater, but since i had time . . . 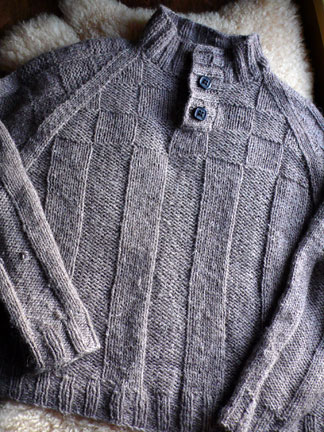 i’d seen this one in the rowan vintage knits book and though the yarn i had would not make gauge, i was able to adjust the ribbing to the gauge i was able to get, and from there it went very quickly.

shamefully, there was no christmas sweater last year . . . there was lace and a new pattern business, and actually neither of us got a new sweater all year.
i vowed that this year would be different, no matter how much lace there was to knit.

david does SO much to make sure i always have time for knitspot. he takes up slack all over the place and soothes the havoc that having an extra business wreaks on our “free time”.
i wanted so badly for this one gift to say how much i appreciate and love his thoughtful, generous, nurturing and encouragement of my work.

what better way than to say it with handknits? thank you david!

(ps: that makes eleven FOs for those who are counting; the zig zag mitts are also done so that makes TWELVE.) 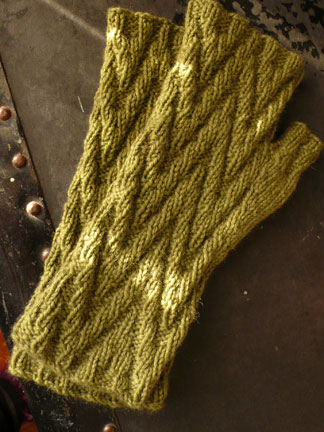 today, i am spending the whole day talking to my family, writing, listening to a book (bridge of sighs by richard russo), and knitting something for me. 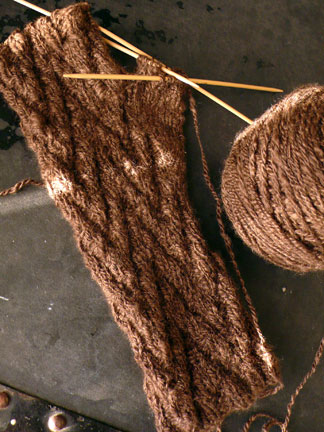 oh yes, and i believe there are a few things under the tree that need my attention . . . 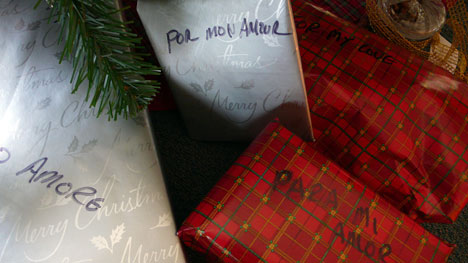 (he’s not big on gift tags, but i get the message)