several fun things to talk about today, so let’s get the latest FO out of the way
i finished the pavé hat which matches the mitts i’ve been working on

the earflaps will, of course, be optional and the pavé pattern goes right to the tippety top taking a wonky diagonal course where the decreases start. kinda like a bike might do when riding over cobblestones.

we are gonna knit a set in girly colors too, just to show what a difference the yarn makes (we’ll leave the earflaps off this time i think).

ok, so guess what knitspot??

we won! we reign victorious in the knitting war

i didn’t know there was going to be one overall winner . . . i thought we just had to win in our pairing. good thing i didn’t get in the habit of checking on the other warriors; hehe, i can’t take the pressure so i didn’t really scope any of them out until the end. instead, i relied on YOU for constant cheering-on and encouragement (i think you all know how instrumental good-natured peer pressure is around here).

anyway, get this: the benefactors also gave extra money to MSF for each of you who pledged to back me . . which DOUBLED their contribution—$90 dollars for each item i knit PLUS $90 for the group of supporters—that makes $180 to MSF.

BUT THAT’S NOT ALL—if i’m not mistaken, if you add in the pledges of each knitspot participant, that brings the grand total of what we ALL raised to . . . $1800 dollars!

knitspot readers rule. but you knew that, right?

ok, now here’s a fun contest to participate in over at mason-dixon knitting. i found it via wendy’s blog

ann and kay got to reminiscing about recipes and recipe boxes and they want us to share our own recipe boxes with them (go to their site to read the rules).

now you know i’m always talking about and showing you dishes that we eat in my family both for everyday and for special dinners. and often i am asked to post a recipe or email it to someone. i don’t post recipes because they tend to be rambling essays rather than the thing you’d really want, and the final results rely heavily on taste, intuition, and having seen grandma do it.

also, this is a knitting blog and the food i show is mainly for distraction.

truly, most of those dishes are ones that i learned to make on the job, standing next to mom or gram while they cooked and told me how to make it, or had me put it together while they looked on, often with their hands full, making a different dish. so there aren’t really recipes; instead there are guidelines i guess.

however, baking is a different story and there, you need a little more exactness—measurements and combinations of of ingredients are more important to the success of the finished product.

so we DO have recipes that we pass around for baking. my mom gave me her old recipe box when i moved into my first or second apartment and i started cooking a lot on my own 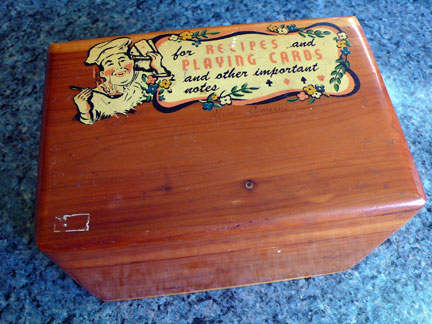 it is made of cedar and though it’s old, i can still catch a faint whiff of that aroma when i open it. it seems to have been purchased a souvenir from howe caverns, a tourist attraction and “natural geological wonder” located in central New York State.

i had to fill it myself, but i soon did, mostly with recipes i copied from her files.

mostly, i keep in here the kind of recipes that get passed from person to person—ones you would not find in a cookbook necessarily, but which end up being my go-to recipes.

i have lots of cookbooks 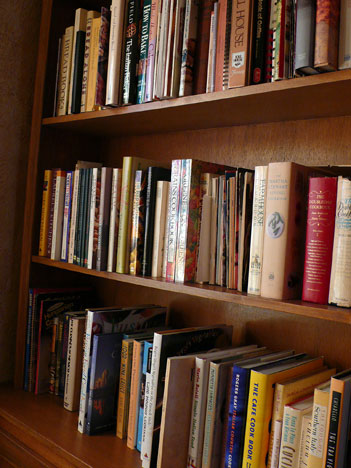 and i use those too, but more when i want to read about a particular regional style or learn a new dish that my family doesn’t make.

now, when my grandma died, i inherited her kitchen tools and these books where she kept some of her recipes 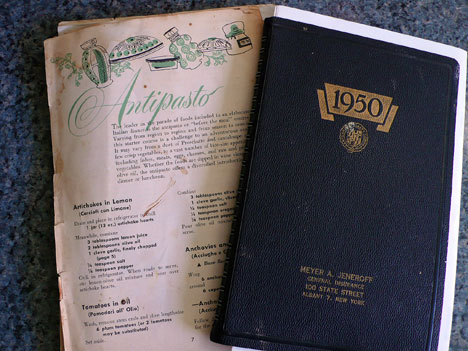 seriously, i think that printed recipe book served more as a folder for her own notes than to furnish her with instructions. because when you open it, you get this 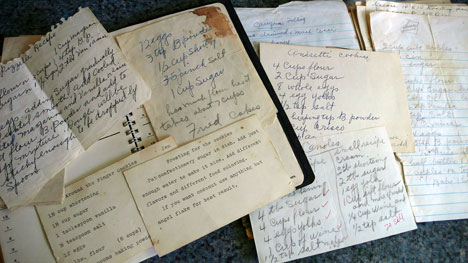 lots of handwritten documents, some of them even resembling actual recipes. hahaha!—most of them are just lists of ingredients with no accompanying instructions; often the list just trails off a bit at the end . . . you have to know how to put them together (sound like guidelines in another craft we’re familiar with?).

the most charming recipe in there is the one i’m going to share as the final part of my entry: 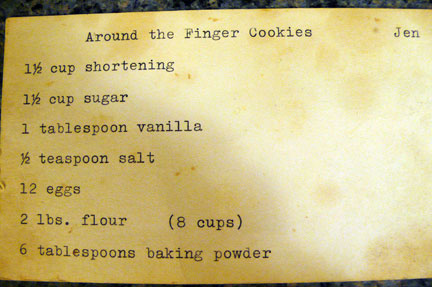 those are the ingredients, and here are the instructions (my favorite part) 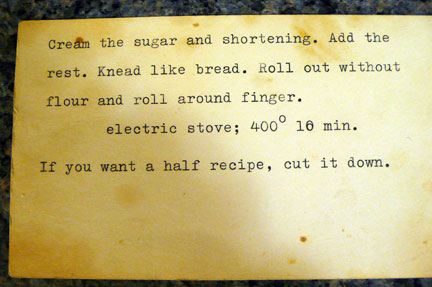 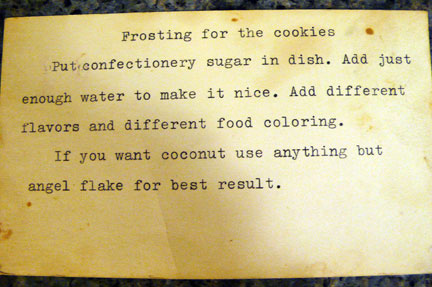 ok, so i’m going to run over and leave a comment and link on ann and kay’s site, then i’m off to knit and nurse the nasty cold i caught this week.