the best way to kick off summer around here has to be a trip to our regional sheep and wool—the great lakes fiber show, which is held every year over memorial day weekend. it’s a small event, but a good one, with a genuine flavor of the area in which we live.

the great lakes region is chock full of fiber producers—someone once told me that ohio has the largest output of alpaca fiber east of the rocky mountains; i’m not sure if that’s still the case, but it has to be close. it is also the biggest wool-producing state east of the mississippi river. in other words it is a knitter’s paradise, heh (i didn’t know all that when we moved here, so go figure).

candy, erica, and i got up early saturday and leaving buddy in david’s capable hands, we drove out to wooster  loaded with patterns to deliver to the knitting notions booth and the briar rose booth, where i had volunteered to help out during the day. 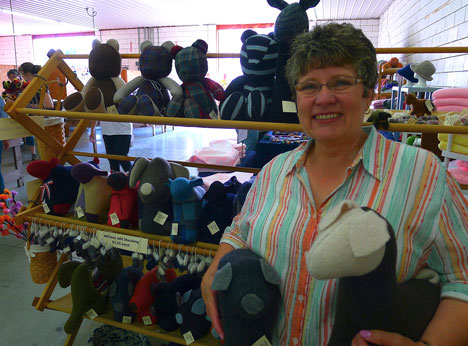 as we zoomed through the buildings on our first pass to get the patterns delivered, we couldn’t help stopping to say hello to kathy from kirkwood farms and get an early look at her delightful booth filled with felted critters; it’s one of my fair favorites for stocking up on gifts for kids and new moms. oh and i might have purchased a couple to put in the guest room upstairs (i’ll show you my fair takeaways in the next post). 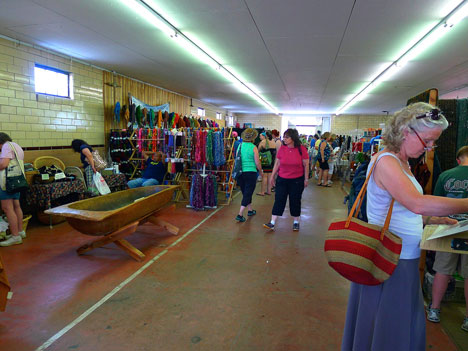 in addition to fiber producers, our area is home to a wealth of artisans who work in every imaginable related discipline, from dyeing and weaving to woodworking, pottery, and felting. 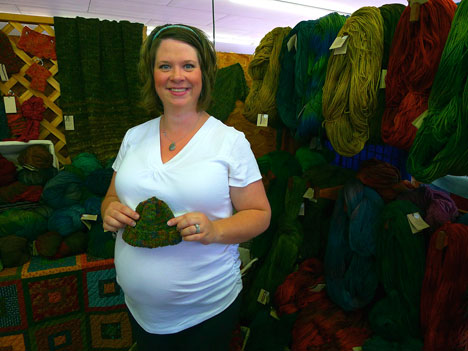 being mamas themselves, chris and catherine had each prepared a little gift for erica—an adorable hat from chris in nate’s sock yarn and from catherine, a little baby sweater in (i think!) classic merino sport and one in her organic cotton. 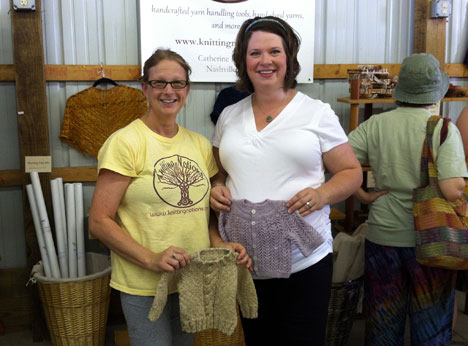 i love that catherine’s cardigan is a pretty, gray/lavender; the bulk of the gifts erica has received are boy-oriented and she thinks it will be a boy, but just in case, it’s nice to have a couple of girlier items, too.

can i just interject to say—look how baby knitspot has grown! i almost fell over when erica told me that the baby is already fifteen inches long. she looks great though, doesn’t she?

chris’s booth was hopping all day long and the hours just flew by—i know i saw more than a few readers there and was thrilled that so many stopped by to say hi, look at yarn, and ask for help picking out something to go with a pattern. i just love helping someone find the right yarn and color.

things really quieted down after 3 pm, so i took the opportunity to fit in a spin around the show floor before it was time to leave for the day. gorgeous fleeces at several booths gave me pause, but considering i have not yet spun the ones i purchased one, two, and three years ago, i was careful not to get sucked in (but there was one that i’m still drooling over . . .)

instead, i focused on enjoying fleeces on the hoof, by spending some time touring through the sheep barns and the alpaca tents outside. it was a hot, hot day out in the sun, believe me, but the animal and retail barns were surprisingly cooler. 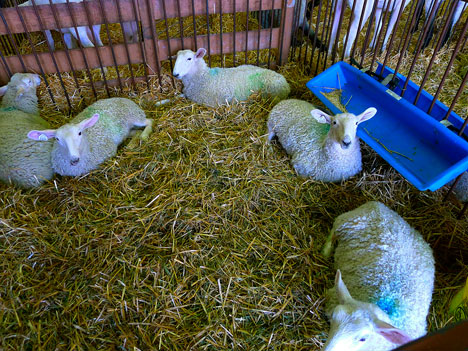 these border leicesters are sitting pretty while a devoted friend watches over them. thesis a popular breed in our region and a whole barn is devoted just to them. 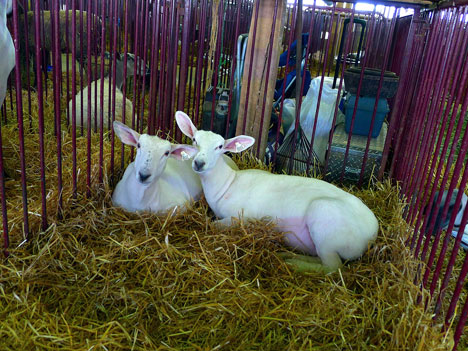 here are a pair that got sheared during the show—probably a good thing considering the heat this weekend.

hats off to the faithful dogs who stood guard, but made no startling noises that would upset the hushed atmosphere inside the barn.

the brown one was pretty shy but this spotted one was quite amenable to being photographed. 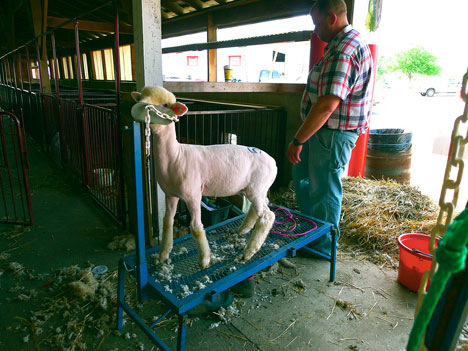 in the building at the end, a little dorset lamb was being sheared—she’s about three months old, despite being the size of many adult sheep of different breeds. yes, she’s big, but then again, look what she could grow into 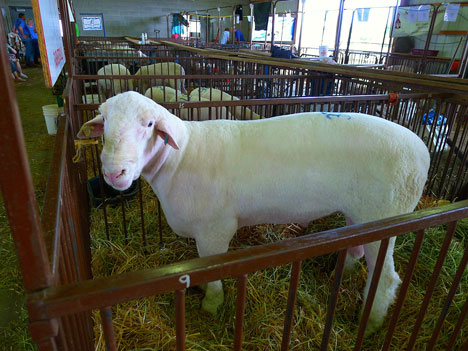 at first glance he looks like he belongs in the cattle family, not in the sheep barn, haha. or maybe he wants to be a pony when he grows up? 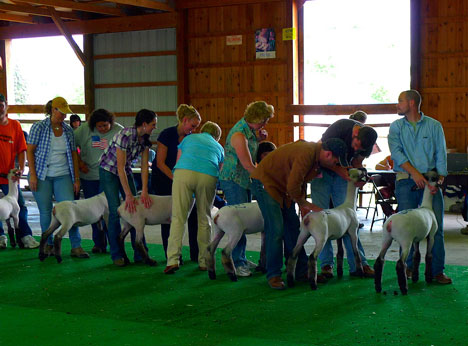 judging starts early and goes on all day and throughout the weekend. when i walked through, i believe they were looking at tunis ewes.

i spent a little more time walking around and wanted to ask a ton of questions, but the farmers seemed busy and i felt shy about bothering them. so i went to hunt down candy and erica instead—i suddenly realized i hadn’t seen much of them all day—hopefully a good sign.

turns out, they were done shopping and had found a nice place to sit and put their feet up out of the sun, with some company to chat with to boot. have i mentioned that people in ohio are super friendly?

we had a dinner date with chris’s family at the south market bistro, our favorite after-show place to eat. with an hour to kill, we decided that we should go ahead and settle in at our table with our knitting and a local beer or two.

it was a terrific meal—so good that i totally forgot to take pictures. 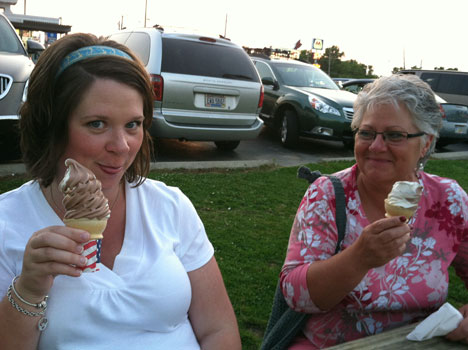 since i skipped dessert at the restaurant and erica had just a wee bit of ice cream, we thought it prudent to top off at the dalton dariette on the way home—a fiber show tradition and one of the few times i give in to ice cream (which agrees with my mouth, but not so much with my stomach). soft ice cream, mmmm.

we got home in time to sit around chatting and knitting a little, catching up with david at the end of the day. he and buddy had a nice quiet day at home—a little hot though.

he seems to like the felted dog bone and ball i bought for him to keep at our house (i just couldn’t resist). haha, the bone is a little too big for him to toss around, but i love that he’s using it as a body pillow instead. 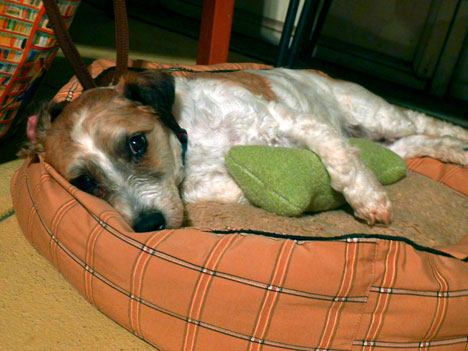 tomorrow, we’ll tell you all about the other cool finds (just a few, mostly non-wooly ones) we brought home, won’t we  buddy?

17 thoughts on “a day for showing off”