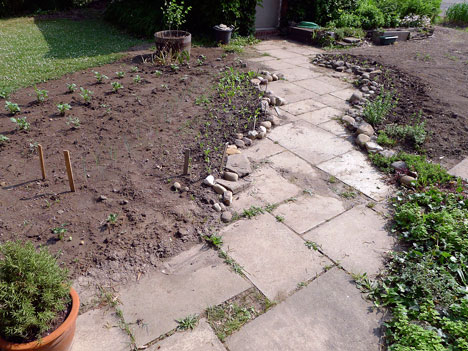 at the start of the memorial day weekend, i was pretty far behind on getting my garden in the ground. where normally i’d have it planted some time near mother’s day, this year, i traveled most of april and may, making it impossible to plant until now. on sunday evening i finally got out there to dig around; my goal was to turn this bare, ugly duckling into a swan by the end of the  long weekend. 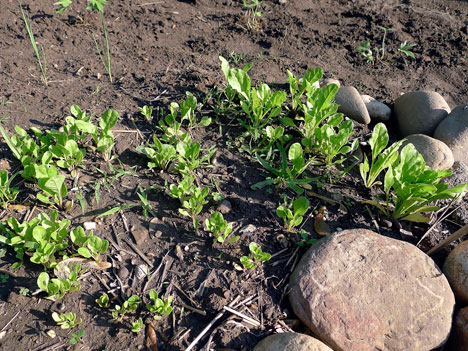 the chard i planted back in april was slow to get started, but once the ground warmed up and the sun got stronger in may, it took off. by the end of last week, it was getting mighty crowded in there, so my first task was to get the greens all thinned out and weeded.

MUCH better—now each plant has room to spread out a bit and is not competing for water with a bunch of other little plants. most of the thinned seedlings were stunted and those i discarded, but the ones that were strong and bigger than three inches, i transplanted across the walkway in the facing bed. 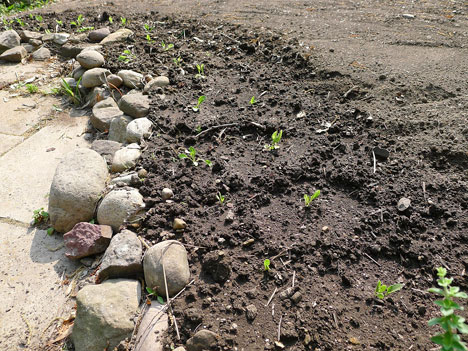 with any luck, they will take well and soon fill out both beds with a mix of green, red, and yellow foliage—my kind of cutting garden, haha.

by the time i got all that squared away it was getting dark, so i didn’t have time for much more. but the next morning i got up early and got right outside to tackle to big chores before the real heat set in—a scorcher was in the making.

we are really struggling with dry weather this summer—normally may is wet and chilly, but not this year. even when we get a “storm” it usually amounts to a lot of wind and ruckus, with just a smattering of rain. just on the other side of the ohio and new york borders there has been plenty, but we are in some sort of dry bermuda triangle here, especially in town where we live. when i dig down below the top inch or so, it’s all dusty-dry dirt underneath. david has been watering daily, but we could really use a week straight of steady rain . . .

that said, with the warm, sunny weather we’ve had all month, we can see visible differences in the plant height from one day to the next.

above are the potatoes we planted a couple weeks ago, the way they looked on sunday morning

and here they are on monday—taller and more branched, for sure. 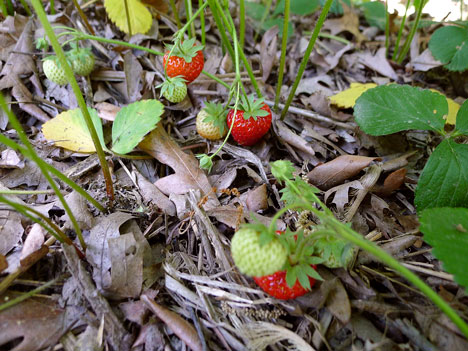 ripe berries, mmm. there were just a few that night; they were not quite red enough to pick and it was hard to see them with the camera 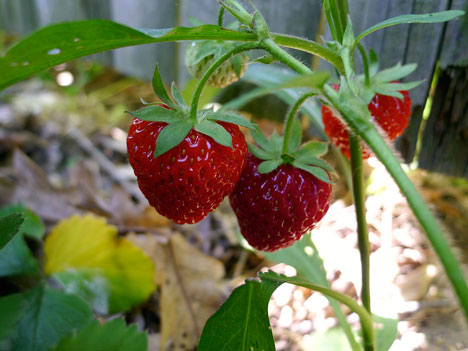 but i came back a couple of mornings later and was rewarded not only with enough berries to make a breakfast from them, but every one of them untouched by critters as well—a first, i think (but our victory probably won’t last long). 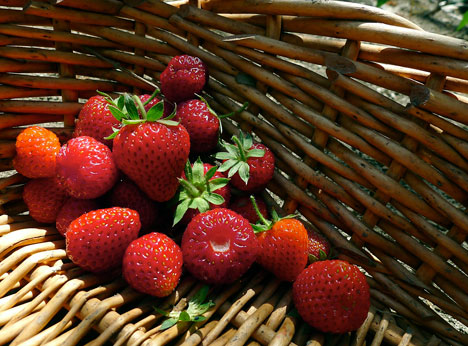 mmm, tasty when sliced into yogurt; i feel so lucky to have them, i don’t even care what they taste like. they are a bit sour, but warmed by the sun they are very juicy. if we could leave them on the plants longer, they might sugar up but our crawly friends would eat them first. 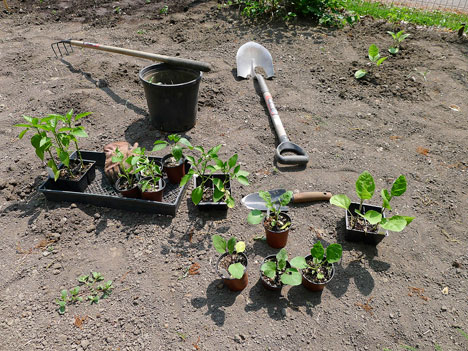 anyway . . . my main goal for monday morning was to get all the fruit-producing plants in the ground—tomatoes, peppers, eggplant, etc. but first, i needed to move the numerous rogue potato plants that had sprung up all over the area where these needed to go.

i don’t know how this happened; i thought we’d scoured the old potato patch for every last root, but apparently, a few remained in the ground. when david tilled the earth a few weeks ago, he must have chopped them up and turned them under, because about two dozen or more sprouted in the last few days.

i thought, why not try to transplant them and see what happens—what have i got to lose? if they don’t take, we’ll know soon and i can plant beets in their place instead. 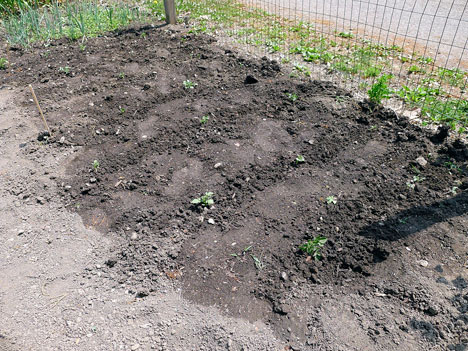 so now we have a whole ‘nuther potato patch at the back of the garden, near the onions and garlic. i planted green beans nearby too, as part of the companion planting plan.

after those were settled in, i worked on planting eggplant, peppers, and tomatoes. by now it was getting good and hot—it was due to hit the mid-90s in the afternoon, so i planned to knock off for a few hours at that time to rest and get out of the sun. 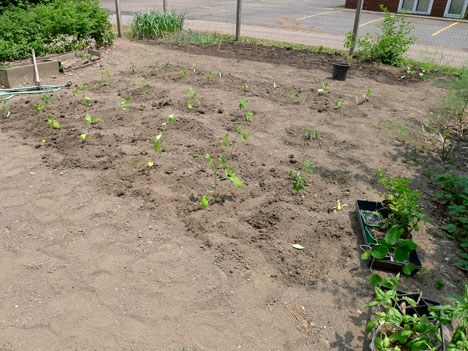 i managed to get all the fruit transplants in the ground by about 2pm; all that remains were the leaf and flower plants. 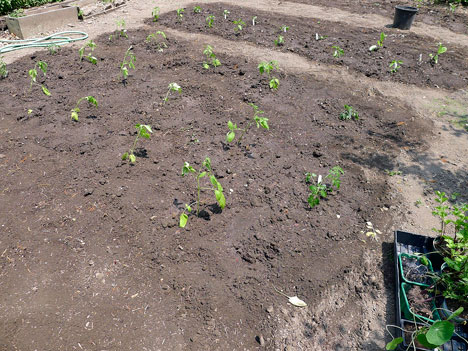 i watered everything down well and headed inside to eat something and shower—i was covered from head to foot with a dry, dusty layer of dirt, courtesy of the wind and lots of digging.

in the evening, i came back out to plant green beans, squash, more chard, beets, and some flowers to ward off insects—marigolds and nasturtiums. i put radish seeds in between the potatoes and squash as well and basil in between the tomatoes.

i would have liked to get some corn in there, just to try it, but there wasn’t room after all. haha, unless those potato transplants don’t take; maybe i could put the corn there. 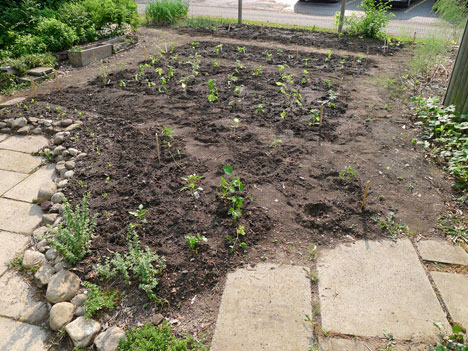 now it’s looking more like our garden (i’ve gone out there several times today just to look at it, haha). i love this next phase, when the plants grow and fill in, before the hard summer heat gets to them.

next we have to get our newspaper and straw mulch down, but i need the seeds to germinate first so we don’t cover them up. probably a week or so before we can do it. but it will be especially important this year if this dry weather continues—the mulch really helps to keep the ground damp and cool around the roots.

another thing i noticed on monday as i was putting those potato transplants in—garlic scapes had begun to appear. 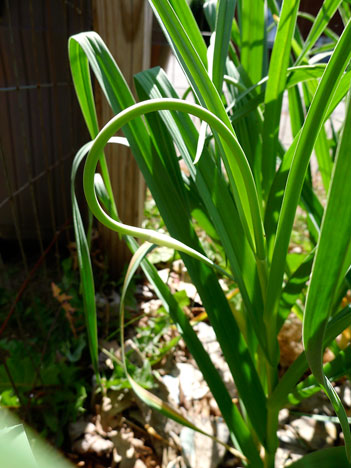 i love that they look like swan necks, so graceful. these begin to appear on locavore menus and in farmers markets right about now and will be available for a very short window through june (click here to read more about scopes) 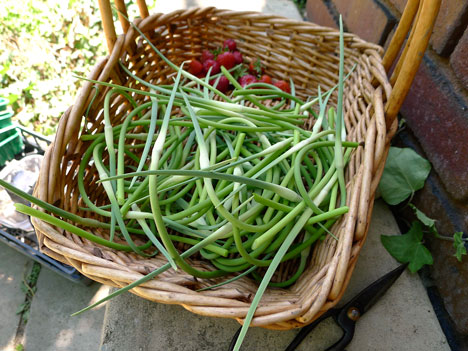 last year they came in a few at a time for a week or two in our garlic patch and we chopped them to scramble with eggs or added them to spring soup with chick peas, escarole, and green peas. but today i picked a whole basketful at once, one from nearly every plant—i’m thinking i might make a pesto (see link above for recipe) or search for other ideas. then again, that spring soup sounds amazing doesn’t it? and we haven’t eaten it since last year . . . hmm maybe i have enough here for several options. 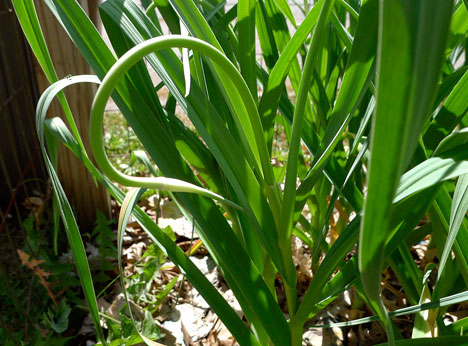 who knows, the way things are progressing out there, we might be eating other fresh greens sooner than we think. i’m looking forward to being home all summer this year to take full advantage of it. 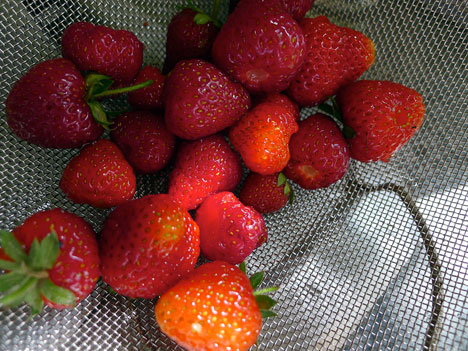 7 thoughts on “swans of the garden”