it was a really smart idea to concentrate on WIPs yesterday and not think about a new design for a bit. in fact, i think i’ll keep that agenda going for today too; it’s a refreshing break and good for my brain.

even though it was gorgeous outside yesterday, and i did spend some time out there riding my bike, i managed as well to get lots done on my two scarves in progress. 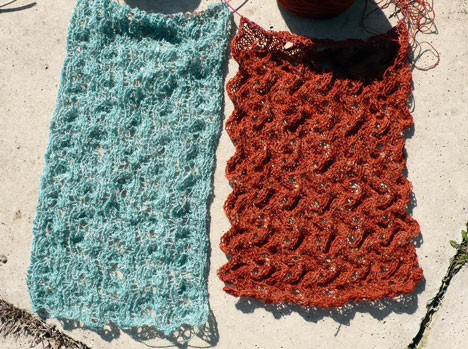 pear and trellis (left in fearless fibers alpaca lace) is just about at the halfway point, so it’s a downhill ride from here with that one. yay. (and thank you for your comments on its prettiness; its self-esteem has been assuaged).

and in the evening i worked on my other new scarf (right, in dicentra alpaca lace), and got that to about the one-third point (it’s hard to estimate size with these, since they contract so much and will change so drastically in the blocking). 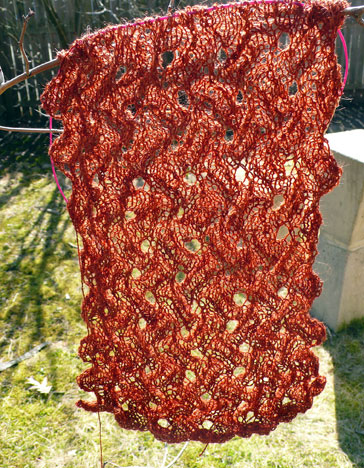 here it is with the light shining through; i think you get a better feel for the motif this way.
and what about that color?? in other photos it looks a lot more flat and i’ve been challenged to find a way to show off the incredible complexity of the color. it is a deep paprika with gorgeous highlights of copper and gold, which require some light to bring them to life. 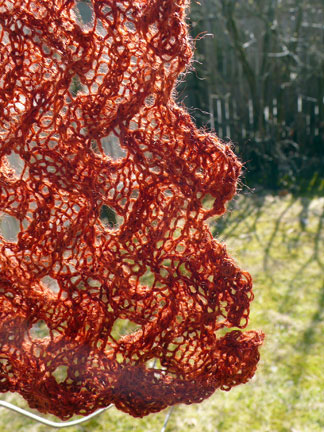 and today, we have light galore, so out to the yard we went.

kim (who is test-knitting one of these scarves with her own yarn) asked me where the name came from, so i told her that the repeating motif makes me think of alhambra, an architectural wonder situated in granada, in southern spain. it is a palace and former fortress that features a startling amount of elaborate arabesque (the south of spain was dominated by islamic culture until about 1500), both in its architecture and the art and carvings which cover its every surface (again, click on the word alhambra to be taken to the page of text and photos about the palace). why, even the water springing from the fountains forms a repeating motif. it’s spectacular.

arabesque, the defining art form of this structure, is described (in wikipedia) thusly:

The arabesque is an elaborative application of repeating geometric forms that often echo the forms of plants and animals. Arabesques are an element of Islamic art usually found decorating the walls of mosques. The choice of which geometric forms are to be used and how they are to be formatted is based upon the Islamic view of the world. To Muslims, these forms, taken together, constitute an infinite pattern that extends beyond the visible material world. To many in the Islamic world, they in fact symbolize the infinite, and therefore uncentralized, nature of the creation of the one God (Allah). Furthermore, the Islamic Arabesque artist conveys a definite spirituality without the iconography of Christian art.

The arabesque can also be equally thought of as both art and science, some say. The artwork is at the same time mathematically precise, aesthetically pleasing, and symbolic. So due to this duality of creation, they say, the artistic part of this equation can be further subdivided into both secular and religious artwork. However, for many Muslims there is no distinction; all forms of art, the natural world, mathematics and science are all creations of God and therefore are reflections of the same thing (God’s will expressed through His Creation). In other words, man can discover the geometric forms that constitute the Arabesque, but these forms always existed before as part of God’s creation.

(i drew excerpts here, but really it is so fascinating, it’s worth taking the trip over there to read the whole entry and follow some of the links.)

arabesque has everything—art, science, math, history—and so beautiful. it is SO me.
now, my humble little scarf hardly approaches the magnificence of actual islamic arabesque, 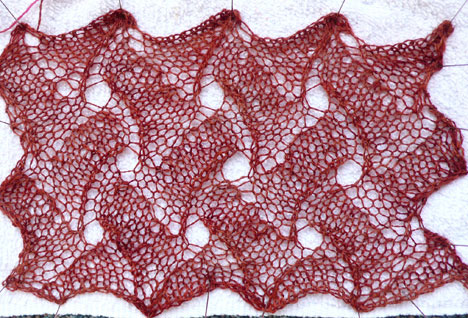 but a phrase which caught my eye in reading about the art form pleased me enough to give it a name which echoes of the real thing:

For most Muslims, the best artwork that can be created by man for use in the Mosque is artwork that displays the underlying order and unity of nature. The order and unity of the material world, they believe, is a mere ghostly approximation of the spiritual world (which for many Muslims is the place where the only true reality exists).

i love that idea that what we make and see around us is a “ghost” of something far greater and more beautiful. one might say a mere ghost, but i prefer to think of it not as less than, but as a not-quite-developed clue or hint that more is possible, and to strive for it is to be on the right path.

ok, maybe that’s a lot to read into my own work, but hey, it keeps my mind busy while i knit. otherwise, i might be getting into more trouble than i do. hehe.

and now, back here on earth, i also worked on my new sock last night 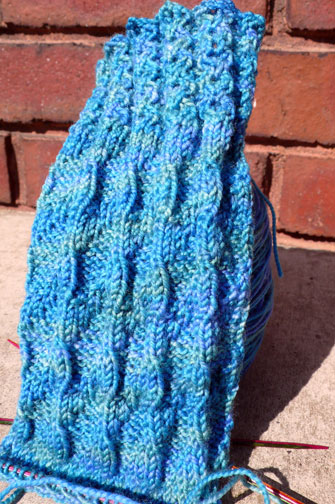 i finished the leg, and in fact, i actually knit past the point that was good for it and had to rip back. i generally like my socks a little longer and usually knit a 7 to 8-inch leg before starting the heel. after 6 inches i thought the proportions of this was were perfect, but i decided to knit longer just to see. and well, it looked a bit snake-ey.

since this is more of a summery sock, i ripped back to the point i already knew was right, and felt happier. sometimes, i just have to prove myself wrong to be totally pleased.

i tried a couple of different slip-stitch patterns for the heel and i have to say, i’m not thrilled with any one of them exactly. i wanted to use something with a pebbly texture, and i found a couple of options, but when knit up, the scale was teeny-tiny and the pebbly part felt, well, like actual pebbles. not good at the back of the heel. 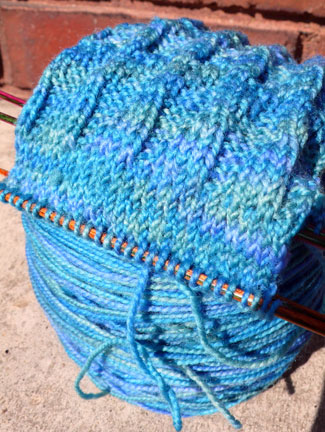 i then restarted a third (or maybe fourth time) with the eye of the partridge heel, which is cushiony, but a little wishy-washy in terms of the texture. hmm.
i left it that way at 4am, figuring i’d have another go at it tonight—maybe i won’t go with a slip-stitch pattern at all. there are some other textured patterns that are closer to what i’m thinking i want; they might not have the density of a slip-stitch pattern, but they are probably more dense than stockinette.

so you see?? once again knitting elevates me and then humbles me, all in the same twelve hours.

24 thoughts on “why alhambra?”