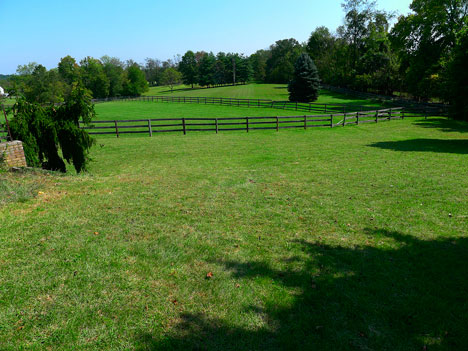 look at that—gorgeous green pasture and blue sky as far as the eye can see; who wouldn’t want to live here?

the car trip to maryland  on thursday was actually lovely—traffic was low, the weather was sparkling, and i listened to a book i really like. today begins my break between teaching gigs, so i thought i’d get us all caught up on the places i’ve been and the people i’ve met. 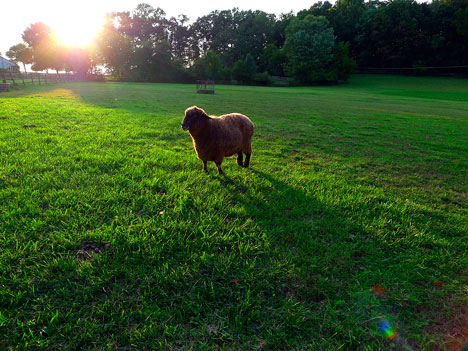 first stop was shalimar yarns and the farm-based studio where kristi johnson dyes up a storm of beautiful colors. i was surprised to see that nearly everyone who came to friday’s class was a returnee from the sweater fitness workshop we did in the spring; it was like a reunion. this crowd is a LOT of fun, too. 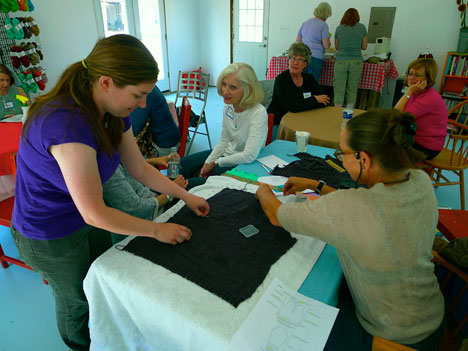 we gathered in the studio building for an all-day finishing series, where participants learned and practiced blocking, seaming, and garment add-ons—everything they need to finish off a sweater project like a pro. above, ashley prepares to steam block the back of her bel air sweater by pinning it out to the measurements in her schematic. 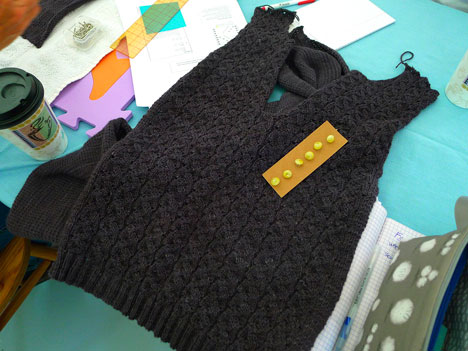 she brought along everything she needed and by day’s end, she was well into the seaming. and with those gorgeous yellow glass buttons from moving mud as incentive, who wouldn’t want to get to the final steps as quickly as possible? 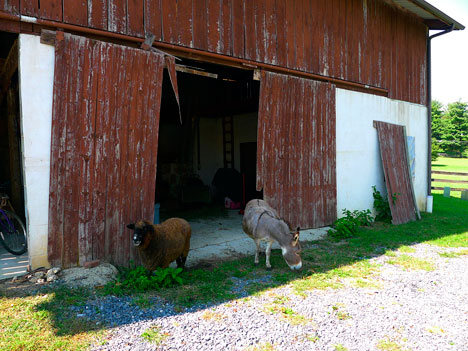 around lunchtime, i noticed that the sheep and the donkey were wandering out of the barn, probably wanting to know what the humans were up to—i couldn’t resist running out right in the middle of class to take a photo, haha. i knew you’d want me to . . . 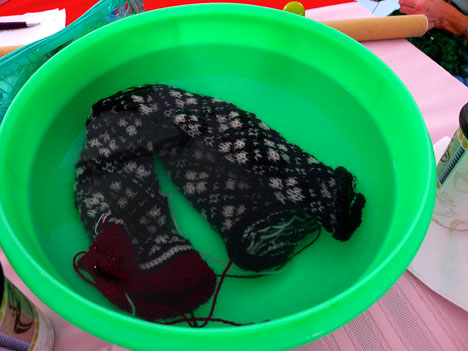 there was wet blocking too; several participants threw their accessory pieces or sweater parts into the wash water for a good soak before reshaping and blocking them to dry.

we even soaked and stretched a shawl on blocking wires, though to my dismay, i did not get photos of threading it onto the wires (we all pitched in to try our hands at it) 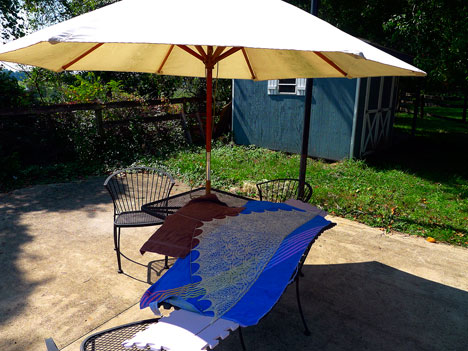 once it was pinned out though, i did get pictures—since it was white, we took the whole shebang (blocking boards and all) out to the patio to dry under the umbrella in the warm breeze. the fiber was so light, i don’t think it took even an hour. 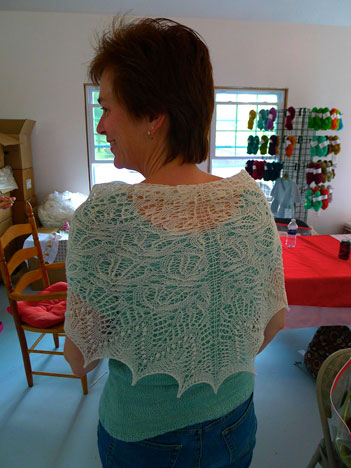 it dried in plenty of time for susan to model it 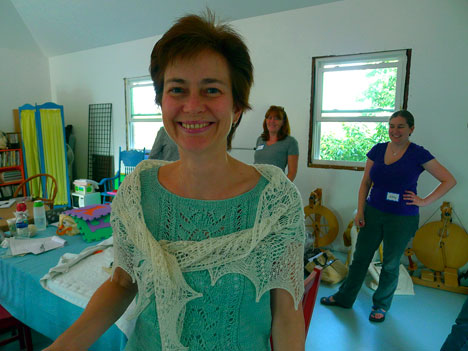 she was beaming at the results (in  previous iteration, it was too small and a bit distorted in shape). and well, doesn’t she look pretty in it?

by day’s end we had covered seaming and adding on button bands, buttonholes, pockets, and all manner of other finishing concerns. everyone went home full of new knowledge and excited to put those last beautiful touches on their own projects. 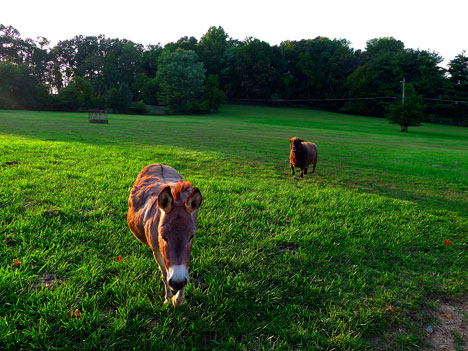 the sun was heading down for the treetops as we got ready to leave the farm for dinner and the light was so pretty i couldn’t resist stopping for  few photos. 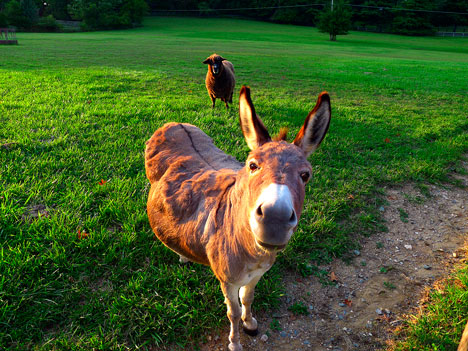 i find the donkey endlessly amusing—but i can’t ever remember their names! i think they have really commonplace names like clem and ron, but i know that’s not exactly right. sigh; one of these days i will become more thoughtful about these things . . . 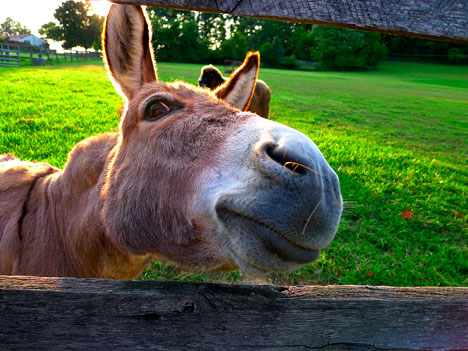 this one wants to come in for a kiss at every opportunity; he’s SO cute i almost gave in! 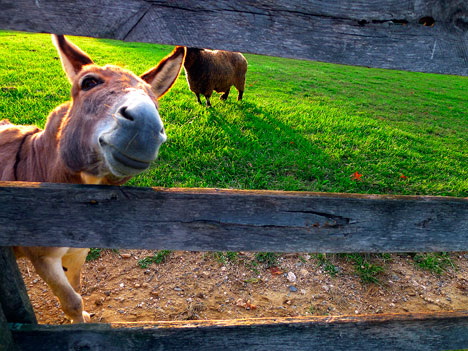 i managed to restrain myself, however . . . 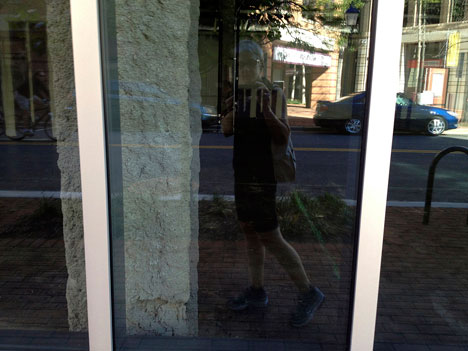 in a complete about-face, my next stop was alexandria, VA, which by comparison, is about the busiest spot i could find myself on a fall weekend. 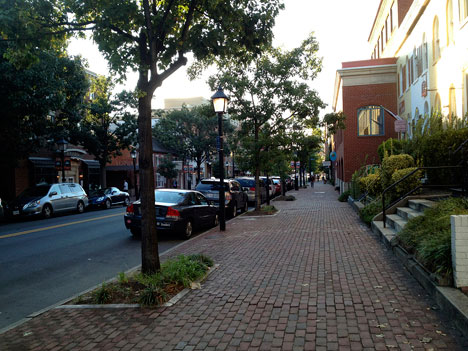 i’ve been staying right in the heart of old town, where i get to run in the mornings on charming, brick-lined sidewalks through quiet neighborhoods of tilting old townhouses—it is so east coast, it makes me a little homesick. 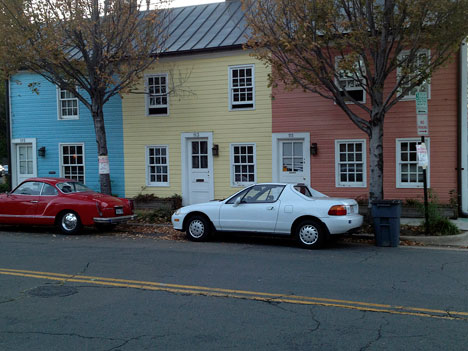 i could take pictures of houses all day here, haha, but i held myself to just a few; i didn’t want anyone to think i was being inappropriate. 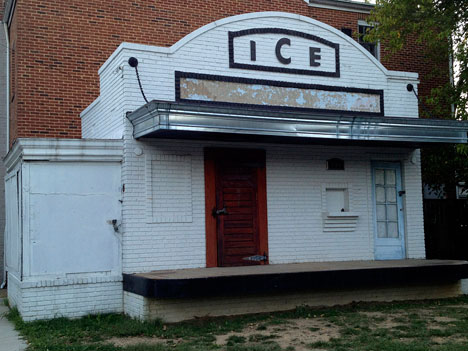 this is my favorite so far; if i lived there, i would use both doors every day. 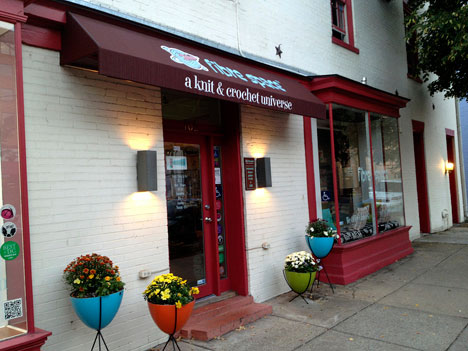 i was here, of course, to teach at fibre space, which has to be the busiest shop in the yarniverse. i am always floored by how many shoppers are in there at any one time—it’s simply amazing. 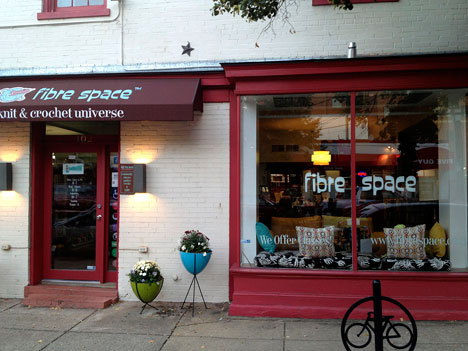 i took my photos when the shop was closed because once it opens, all thoughts of my camera seem to fly out of my head, haha. 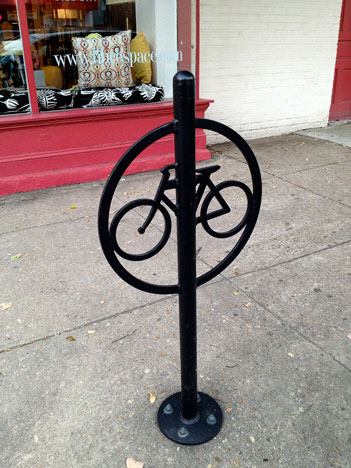 they even have a charming bike rack. 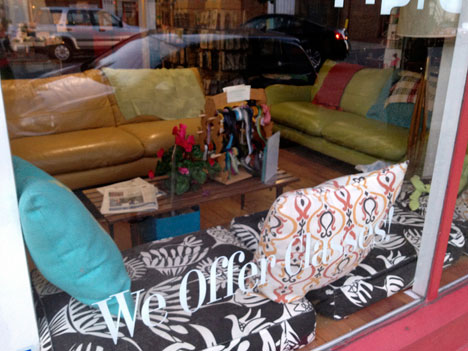 this is a shot of the famous knitting pit, which at any given hour is filled with knitters taking a break form the outside world to get in a few stitches while chatting with other customers. 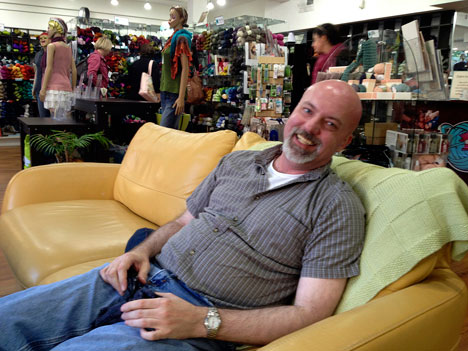 i did manage one photo inside the shop, when i saw rich, who was in my sock design class in may at the shop. we chatted for a bit and then he pulled off his shoes to show me these 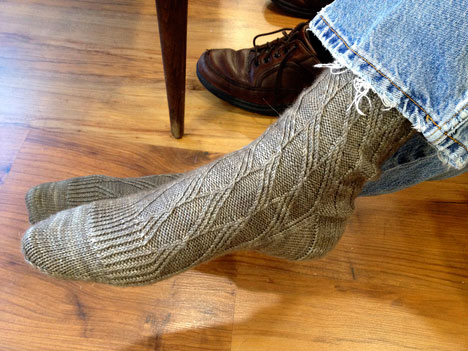 the socks he designed in class—aren’t they stunning? and they fit perfectly. beautiful job rich and thanks for sharing them.

luckily, they have a quiet upstairs teaching space away from the hubbub, where we had another finishing series on saturday and an advanced lace workshop on sunday, focusing on a twig and leaf shawl project.

i’m such a bad blogger; i didn’t even take one picture in class—thirty lashes with a yarn skein for me. but i think everyone had fun—we did some awesome blocking and had some real breakthroughs in the seaming and embellishments segments. i think everyone went home happy. it was also nice to see many returnees from the spring workshops; thank you everyone for another lovely event.

afterward, i took a nice walk and treated myself to a killer coffee at a local caffeinery. i thought about indulging here 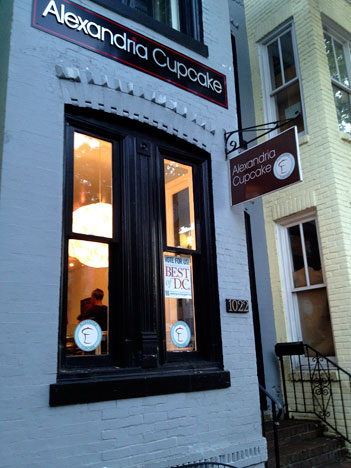 but decided a photo was enough. i’ve been staying away from sugary stuff for a while now and feeling good; i don’t think the time to break down is during a working trip, haha.

you might already have guessed that i’ve barely knit a stitch since i left home; i really haven’t had that much free time. the first two nights it was all i could do to catch up on sleep. byt last night i finally felt more rested, but ended up grazing the internet far too long instead of knitting, in a zombie hangover state.

my hazeline has been getting the most attention, probably because i can almost knit it in my sleep. i’ve worked on it during odd moments in classes and i’m almost done with section A. i don’t want to show it on the blog yet, for fear of spoiling someone who may not have received this month’s yarn yet.

well, it’s still early and i’m pretty much done here—i have time before checkout to go for a run and if i’m lucky, i’ll even get to check out this shop before i leave town 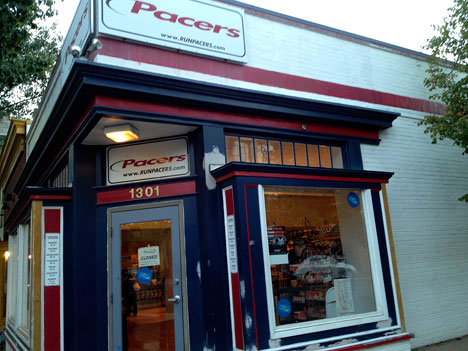 i’ve always wanted to go in but it’s been closed whenever i had free time during the last two trips. today could be the day.

next stop—pasadena to spend time with my dear nephew james and niece diana in their brand new home. they are so sweet to have me stay with them when they’ve just moved; i hope i can be helpful around the place this week . . .

35 thoughts on “town and country”