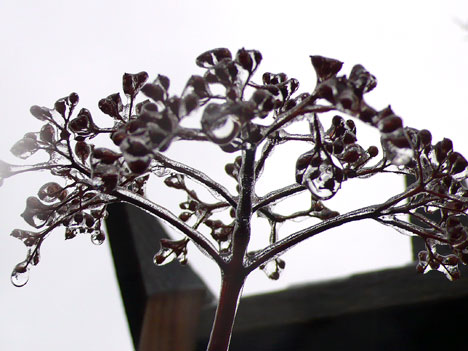 the weather outside is frightful.
where everyone just a little north, west, and east of us is getting nice fluffy snow, we’ve had a couple of days of pouring rain and ice, even when it’s several degrees below freezing. weird.
hopefully the temperatures will drop and it’ll turn to snow, if for no other reason than to brighten things up a bit. it really is as gray as it looks in that photo, ugh.

but good knitting weather.
i’am focusing entirely on david’s sweater for the time being. there’s very little excitement in actually showing you the row-by-row account, so i got out the man form to change things up a bit today. 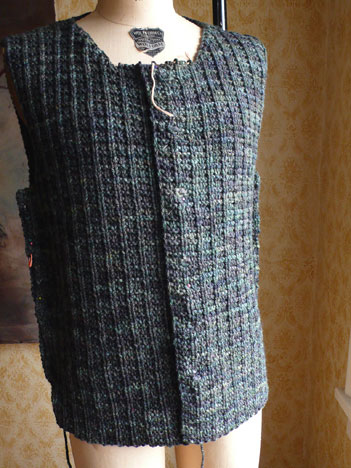 with the shoulders knit together, it was now possible to see what sort of fit we are talking about. this is the point in the project where i know if it’s a disaster that needs to be ripped back or not.

it looks pretty good; it’s hard to tell if it’s too long, but it’s a jacket so it should be longer than other things i’ve knit for him, right? and it’s the length he asked for (but sometimes he doesn’t know that he doesn’t want what he asked for).

it looks a little big on the form, but again, david is more well-endowed around the waist, and has a thicker neck and shoulder girdle than this guy. also, it’s a jacket; he’ll be wearing other clothes underneath. 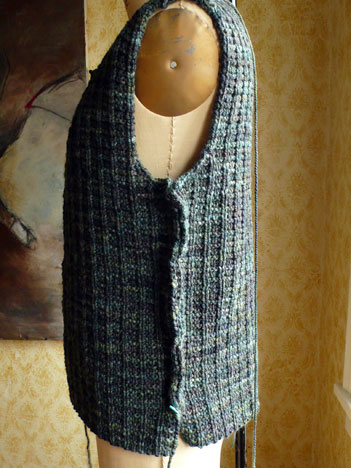 i’m really happy with the way the back hangs—the back can tend to bow out and up on a man’s sweater if it isn’t shaped correctly and this one seems nice and straight (it has just a bit of tapering in the body). 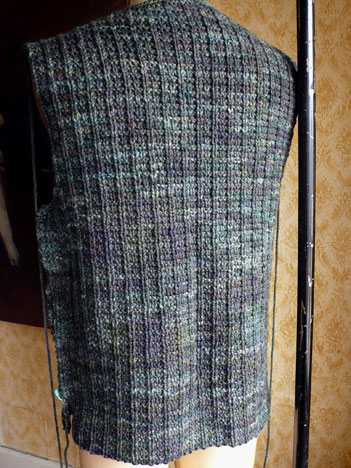 (again, picture a little bit bigger butt in there and i think it will be perfect)

i was also concerned about the armscye in the pattern; the depth of the armhole sounded a little short on paper (9.5 inches) for a jacket, but it agreed with other sweaters i’ve knit so i went with it. it’s awful if you add to that area only to find it’s too deep and bulky afterward. 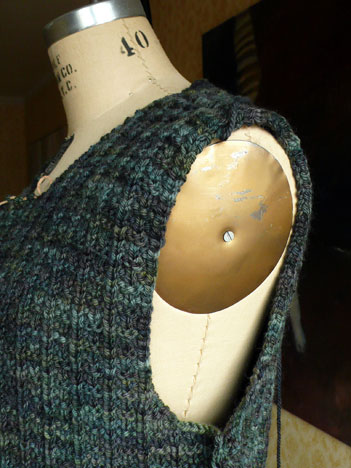 and whaddaya know—looks like there’s plenty of room there to fit an extra garment inside. it will pick up a bit when the sleeve is attached, too. 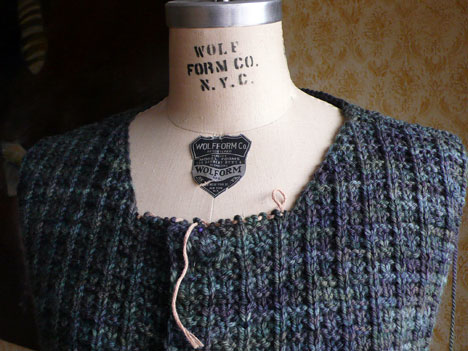 the necks of david’s sweater always scare me; he needs them to be big, and before the edgings or collars are added, they seem gargantuan. but i’m ignoring any nervousness about it.
A) i don’t have time and B) attaching the collar will pull it in some; probably just the right amount.

you’re probably scratching your heads and saying “why the heck doesn’t she just put it on david to find out for sure?”.
and the answer(s) would be A) he’s asleep/working/out and B) i’m scared.

i’m afraid if he sees it now, he’ll go away with this mental painting of it unfinished with loose edges. some little thing or other will catch his attention that will totally change once the piece is finished, and he will forever be wary of this jacket, that is isn’t right somehow.
(ok, this is a fear that was ingrained during my years as a tailor, where you have to do fittings with half-finished garments and somehow, for some clients, it diminishes the magic of the finished garment to have seen it in its naked reality, so to speak.)

thank heavens i can show you and you won’t judge.

ok, now, about those sleeves 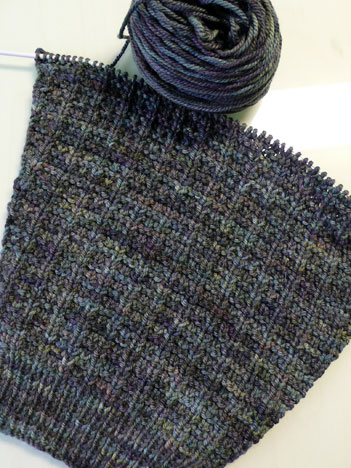 they are underway. this one would have been done by now if i hadn’t reknit the cuff three times times while i was getting started (eye roll).
first, i mistakenly cast on the wrong number of sts and knit 2.5 inches to the increase row, only to find that it didn’t work, because i had cast on the number of sts i should have AFTER that row. i contemplated leaving it as is, but then decided it looked a little big.
so i ripped out and did it over on the right number of beginning sts (4 less than last time), but when i did the increase row it looked awful in the bulky yarn and did not segue nicely to the fabric pattern. AND the cuff looked a little small for a jacket. ugh.
so i ripped back once more and cast on the number of stitches i wrongly cast on the first time
(4 more sts, which is the number i should have after the increase row) and knit it again. it looked great this time, and i was finally able to proceed with the sleeve.

today i should be able to finish that sleeve and start the second one; maybe even finish it if i don’t die of boredom (being faithful to one heavy project can be boring sometimes, right?). 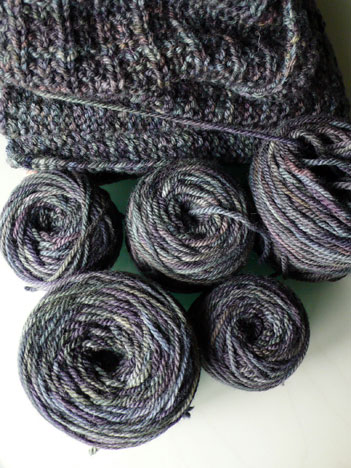 or run out of yarn.
this is what i have left from my original supply of three skeins of robusta.
i’m a little worried. i think i have enough for both sleeves and the collar, but i’m not sure. and i don’t think there’s enough for pockets. BUT chris is sending another skein, just in case (thank you chris!). i am so lucky there is one . . .

if i do get bored with the sleeve and just can’t knit another row, i can always do the collar, now that i have the shoulders together. in fact, it might be nice to get that done; i would actually be amenable to having david try it on if it had a collar.
maybe i’ll do that in between the two sleeves, and sew on the buttons while i’m at it.

i have no other interesting news today; the nephew sock is further along than yesterday thanks to some TV knitting, but not done yet.

oh, and remember the woodsmoke sock? 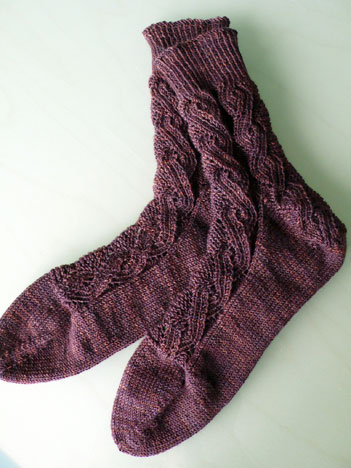 we’ll release that pattern this afternoon for anyone who’s been waiting for it.
don’t laugh, but i keep picturing myself all done with christmas knitting by monday (HAHAHAHA), and contentedly knitting one of these by the fireside.
nevermind that i already have a pair and that we don’t have a working fireplace—these just seem like christmas card knitting to me.

ok, now you can laugh.