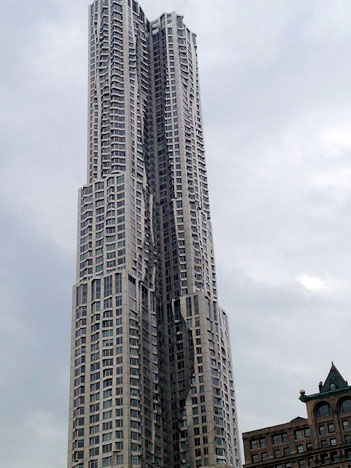 it’s a tall order to decide what is the most fun thing to do in new york city, but one strategy i return to time and again when setting out for adventure is to allow my feet to lead the way. there’s no better way to see my favorite city than to do it on foot. 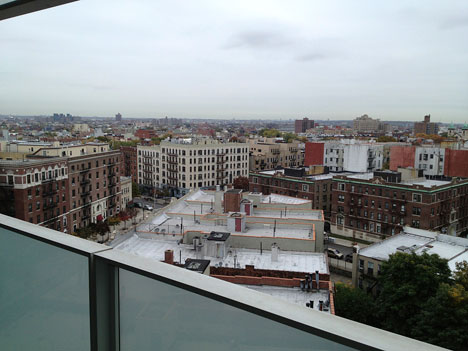 we arrived in brooklyn late on monday morning after meeting david, who stayed just a little while with us and then set off in the car for ohio. we stayed in the brooklyn home of a very generous friend, where we enjoyed a gorgeous view of the city’s most populated borough from every window of the apartment.

that afternoon we went for a long walk in prospect park, which is right outside the door of the building (how lucky are we??). prospect park is another project by designers frederick law olmsted and calvert vaux, who created  central park in manhattan and like that park, it is intended to be a large natural sanctuary where one can escape the noisy machinery of an industrious city.

unfortunately, my phone camera was full and i got no photos inside the park that day, so i’ll leave that up to your imagination. afterward, we met our friend mary fischer for dinner at al di la trattoria, brooklyn’s celebrated italian eatery. 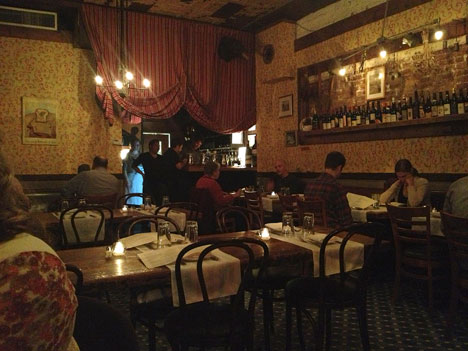 the cozy street-side dining room provides a warm atmosphere and efficient, friendly wait service along with luscious italian food—we enjoyed a delicious and relaxing dinner there.

we headed back to the apartment with every intention of knitting the night away, but found ourselves exhausted and nodding off almost as soon as we’d changed into our jammies—bummer. but what could we do? we hauled ourselves off to bed to get a good night’s sleep—we had a big day planned for tuesday.

sure enough, i was awake at the crack of dawn so i went running while kim got ready. after i got back, stretched, and showered, we set out. we walked from prospect heights, through carroll gardens and cobble hill to the promenade in brooklyn heights 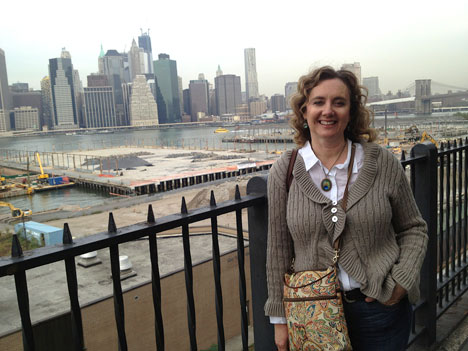 where we could then see a view of manhattan’s east side. 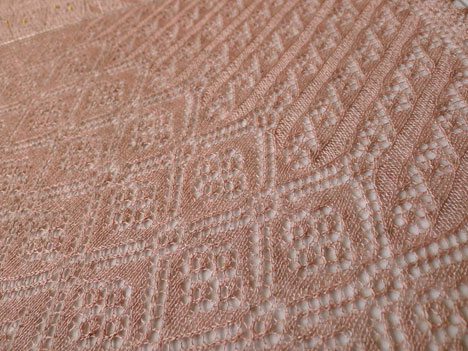 i don’t think i mentioned it earlier, but i did get my wasp and rose blocked before i left home 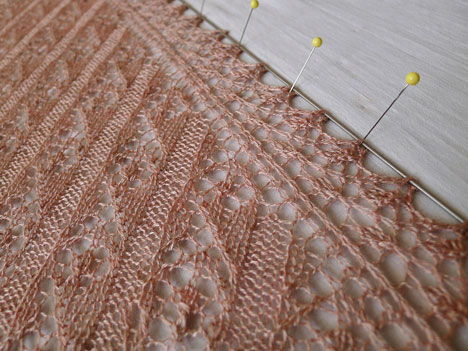 and i had it packed in my bag in case we had an opportunity to do some modeling shots during the course of our trip. 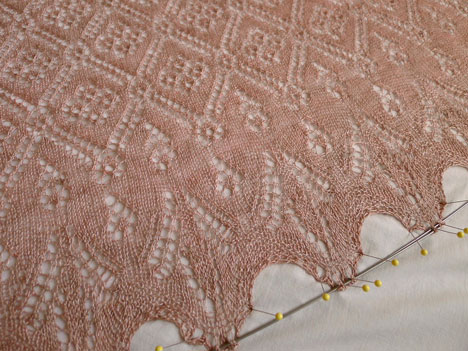 when we got to brooklyn and made our plans, we saw our opportunity; we could shoot photos on the apartment balcony and at various points in our walk—perfect! 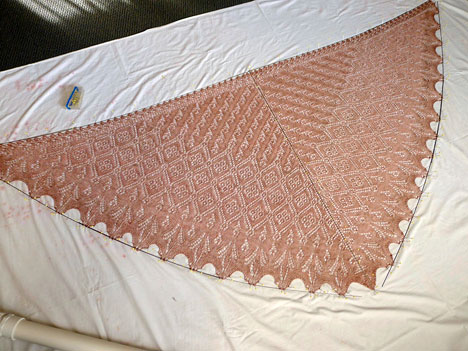 as kim put it, the contrast of the city and the lace or of manhattan and brooklyn is like the wasp and the rose—one is quick and sharp, the other is softer and gentler. 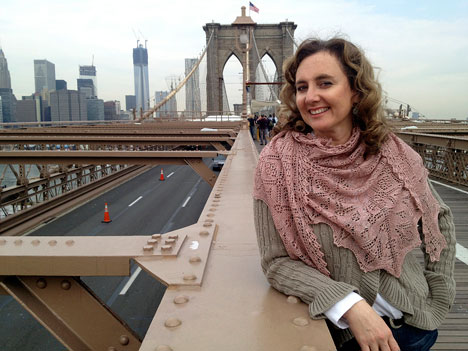 well the idea was completely successful; this is just a hint of the photos to come when we are ready to release the pattern (hopefully, when i get home next week and can show you vanessa’s sample as well!)

after walking over the bridge, we sat for a minute in city hall park, admiring the skyline of the financial district from below. then we set off to find some lunch—we were hungry. we walked up  through china town and nolita, then over to soho, where we found an empty table at fanelli cafe, where i’d eaten many a fine bowl of tomato soup during lunch hours when i worked downtown.

it was exactly ass i’d remembered and kim enjoyed it, too. while we ate it rained a bit outside and was still drizzling a bit when we emerged, so we decided to hop a train to our next destination—niketown on 57th street. 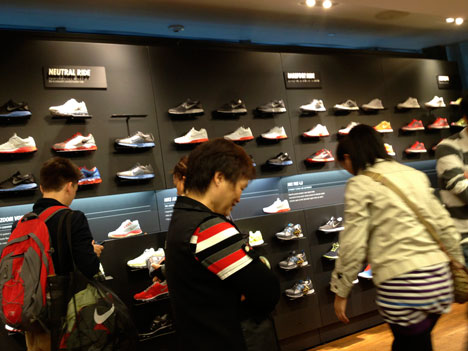 oh, i now—very commercial and touristy, but since we are both avid exercisers and in need of new sneakers, we didn’t care; we went anyway. and since we were actually there on an errand, we didn’t stay long but we both walked out with what we went for.

ever since last year, i was hoping i’d find some running shoes for winter that would keep my feet a little drier and therefore, warmer. i hadn’t found any such thing—which i really don’t get, since most runners go all year, but ok . . .. well, now nike has a new line of shoes with a shield that repels water—not exactly waterproof, but better than nothing, so i’m trying them. kim got trainers for the gym that we both liked.

as we crossed town to our next destination, we stopped along central park south to snap this beautiful photo of kim against the backdrop of the pond and  path below—i love this shot. 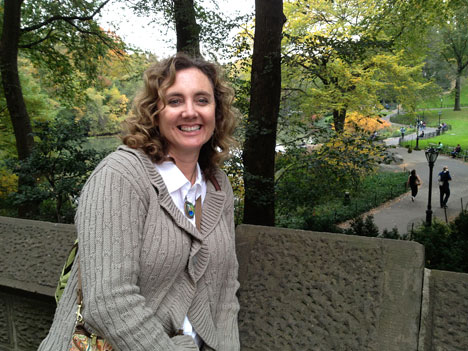 by then we had walked over ten miles and those of you who follow kim in our clubhouse MUST be wondering, when the heck are they gonna eat cake??? well, since there was a magnolia bakery right around the corner at bloomingdales, that was our next stop.

kim got the coconut layer cake and a red velvet cupcake. i got the devil’s food cake—which was so big that i had to eat it in three sittings over two days. had to.

after magnolia we walked twenty more blocks to the spot where i wanted to buy david’s present, which i won’t reveal—because that would spoil it—but suffice it to say that he will be very pleased.

we stopped for a break in bryant park behind the main branch of the new york city library, to eat a bit of our cake and rest our poor, overworked feet (note to self: brown bossy boots are awesome, but a bit heavy for walking very long distances).

we were very much looking forward to dinner with agnes and cathy, the awesome moderators of our ravelry knitspot mothership. we met them in the east village, where they took us to the redhead, a small pub/restaurant with a southern bent.

we talked and talked and snacked and ate—it was absolutely the best night. we reluctantly left them and headed home, which was an adventure with so many trains rerouted for track work. but we made it!

once again we were completely knackered and we had an early date in the morning, so we toddled off to bed almost as soon as we got in. 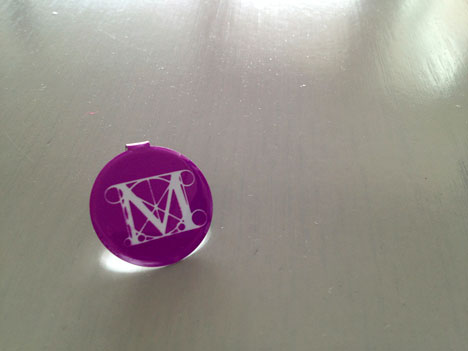 wednesday morning was kim’s last in NYC before heading home and we spent it at the metropolitan museum of art, along with megan and kat, on a private tour of the egyptology wing, with kat’s friend ellie, who has worked in the department for over thirty years. 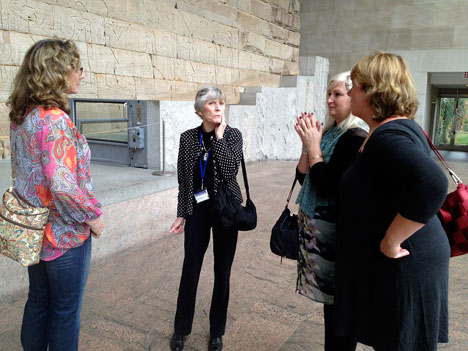 she is just lovely and so very knowledgable—i could have followed her around all year, listening to her speak! we saw some tombs and learned about how to read the heiroglyphs, then looked at other art and artifacts related to what we saw. 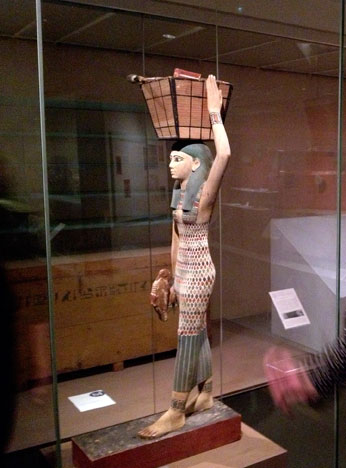 once again—how lucky are we?? this was the opportunity of a lifetime—for as many times as i have visited the met, i’ve never had a private escort; it was fascinating. i have gained a little more perspective on how to look at this incredible period of art in the future . . . 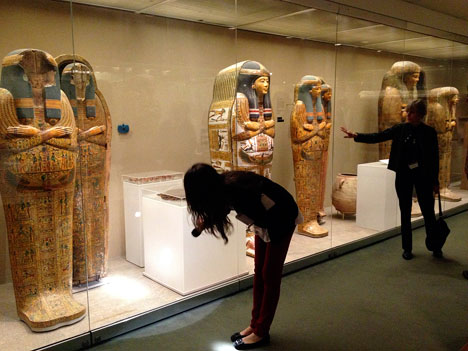 we could have stayed much longer, but unfortunately, kim and i had to take our leave at lunchtime; she was headed home already . . . awwww. 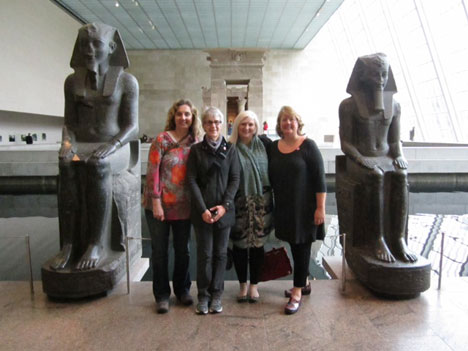 another brisk walk back to our brooklyn-bound subway. at the apartment, kim grabbed her bags and we said our goodbyes—we’ll see each other in the winter when i go west for TNNA.

by myself once again, i spent the rest of the afternoon putting together some blog posts to tide us over until the weekend (which i hope you are enjoying this very minute!).

i’m going to go now for a last run in the park and then pack up my own things to move into the city for the rest of the weekend, where i will be teaching classes through the weekend at the yarn co. there are still spots available in sunday’s sweater fitness class—come join us!

18 thoughts on “we heart new york”