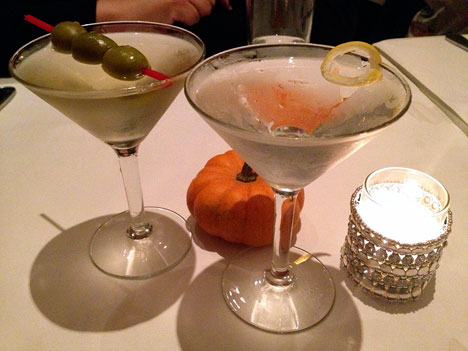 we had a lovely weekend at the yarn co in manhattan, where we were treated to great company and surrounded by walls of luxury yarns. we even got to attend a small party in the home of owners tavy, assaf, and romi ronen 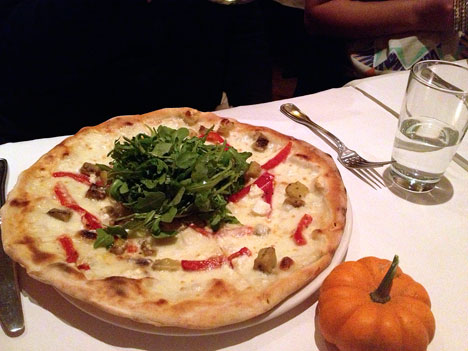 megan, kat, elizabeth, and i had a yummy dinner on saturday night together in the restaurant adjacent to our hotel.

after our last class however, we found ourselves holding cancelled plane tickets and watching one municipal resource after another close up tight in anticipation of the impending storm.
ruh-ro.

kat, who is from a coastal area and has a good head on her shoulders about these things, shot right into action and secured rooms. i moved to her hotel which was the absolute right thing to do—and it is here that i’ve been holed up ever since.

the first night, we just settled in to wait for the storm, which promptly slowed its pace as soon as the airports closed. 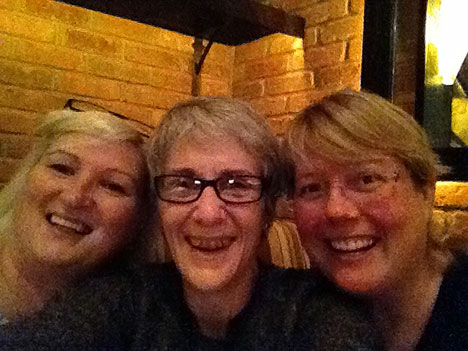 we are definitely having some fun together, but we also wish we could be home. at first we thought we’d wait it out for a couple of days and at least get a bunch of knitting done, but in reality, we’ve done less knitting and more checking of weather pattens and flights, which get moved to a new time every few hours, it seems. 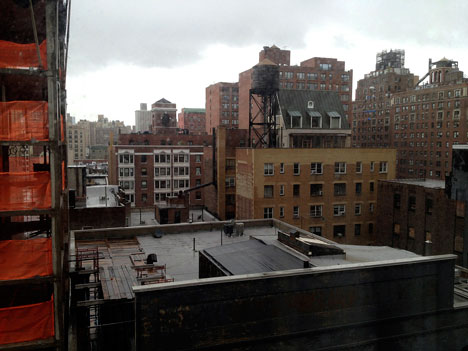 this is the view on monday from my hotel room, which faces northeast. that day, cathy invited us over to knit in the afternoon while we waited for the storm to begin.

now you might want to sit down for this next news—i finished a sock.
yes, i have actual knitting content AND an FO to show for my time there. 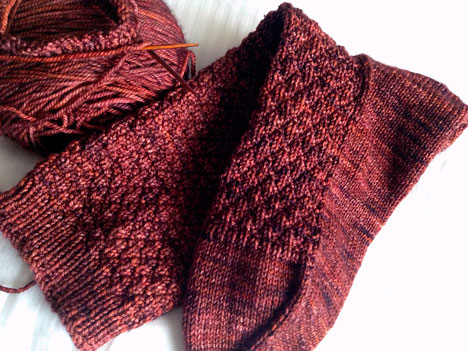 full disclosure—i’ve had this sign of four sock on the needles for ever. it’s been growing in the slowest possible manner in waiting rooms, at doctor’s appointments, and in the car since i can’t remember when. but now it’s done, yay. 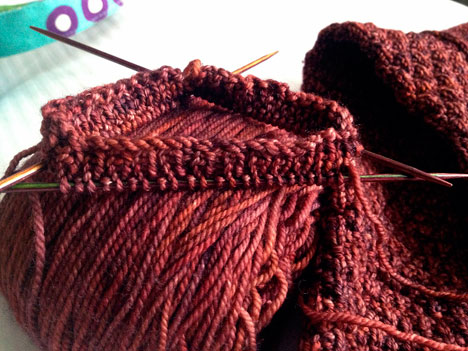 i even got started on  the second sock, david may actually be wearing these before he starts drawing on his social security . . .

these are knit with string theory caper sock, for which i have a deep affection. i’ve had this skein a long time and now i can’t remember the colorway name; i want to call it something like “fusion” but it also looks like it could be black cherry. 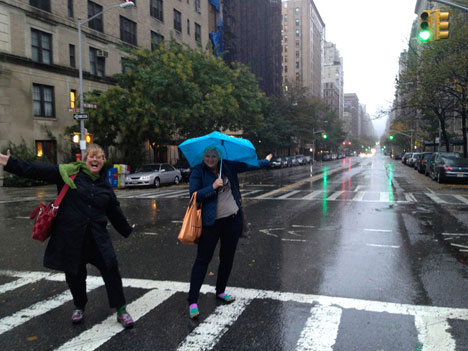 on the way back to the hotel from cathy’s, we marveled at the empty avenues of the city—this never happens except in a state of extreme emergency. but with all the bridges closed and  subways, buses, and most forms of transportation halted, it was a traffic ghost town. we had to be very careful because the cars that were out were speeding recklessly down the empty avenues. 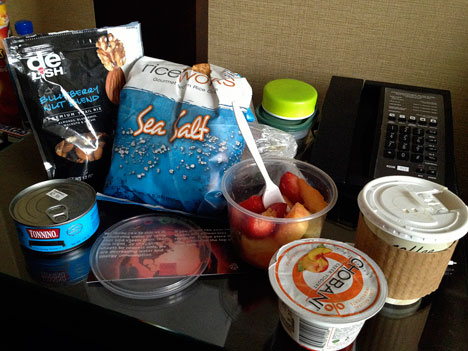 we stopped to pick up water and a few groceries to keep in our rooms—my little pantry was stocked with just about anything i’d need for a day or two, but we never really were without access to hot food from nearby delis and restaurants. 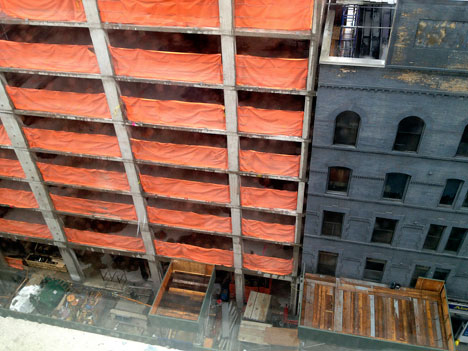 that night was actually rather frightful; we have a construction site just across the street and the wind blew down scaffolding, signage, and all manner of splintered debris, sending it flying. being outside meant putting oneself in danger of being hit with splintered spike of wood, sheet metal, or flying plywood. 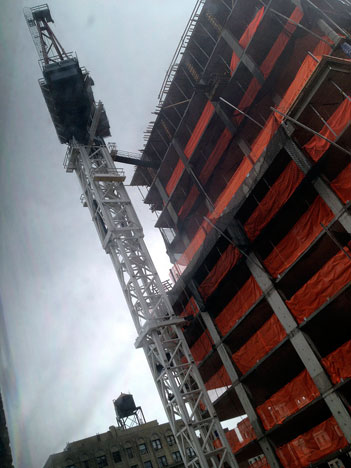 they moved the crane off of broadway and 77th street onto 77th street, where i could now see it from my window. i could only trust that with one crane coming down the other day, they secured this one very well. 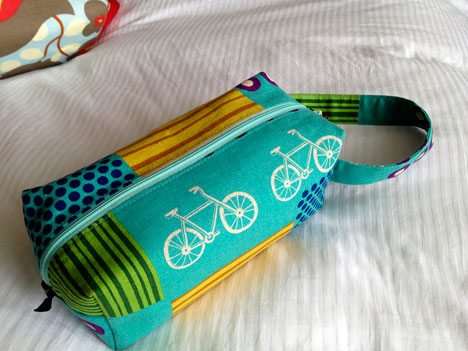 i spent the night knitting on my secret project and listening to an audiobook to keep my mind calm. the lights flickered a bit but did not go out; we lost internet and TV transmission (several networks had to stop broadcasting), and in the middle of the wee hours, the management came around and asked everyone NOT to use the elevators. all in all, not that bad. 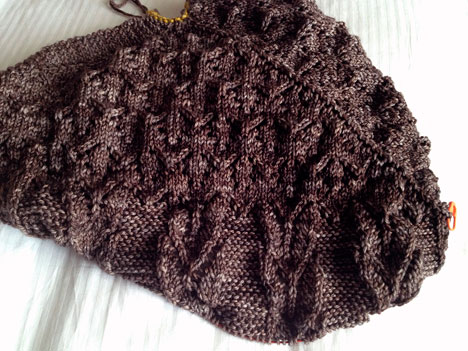 i’ve been working on my hazeline as well throughout the week—it’s almost done. i should be able to finish it up very soon.

the rain was not too bad here in the city and our area did not experience flooding. but the rest of the region was badly hit, as you all probably know. we are VERY lucky to have gotten through it with only travel delays to deal with. 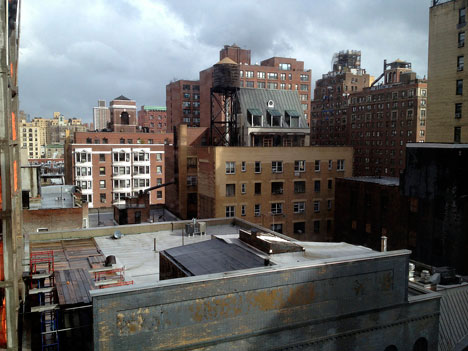 late monday afternoon, i even saw a very brief brightening of the sky and captured this sunny moment. 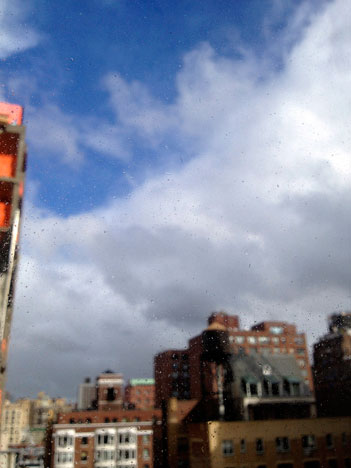 a very blue eye of the storm, we think it may have been. it lasted just a minute or two and then the whole thing clouded over again, but it was awesomely beautiful. 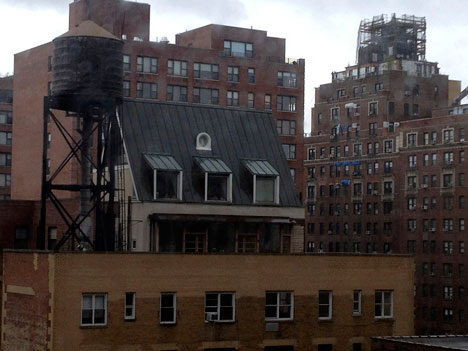 the skies continue to be overcast and there are snowstorms beginning outside the city now, but i have secured a rental car and will be leaving for home in a little while, if everything goes as expected. at this point, i can’t get out of NYC by airplane anytime before friday night. i’m trying to make my scheduled flight for san francisco from home tomorrow morning, by switching to car transportation. hopefully, the weather will hold and i can get there without too much trouble—wish me luck!