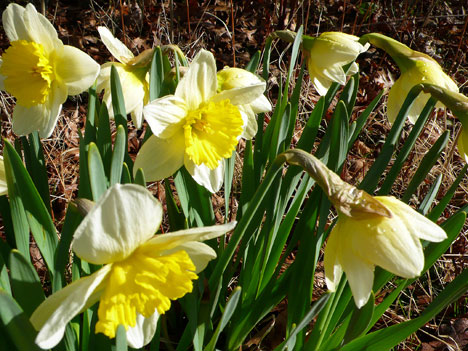 it’s been the craziest day for weather here, but the daffodils decided to open up anyway. i caught this photos during a brilliant few moments of sunshine, though you can see the raindrops clinging to them from an early morning shower. 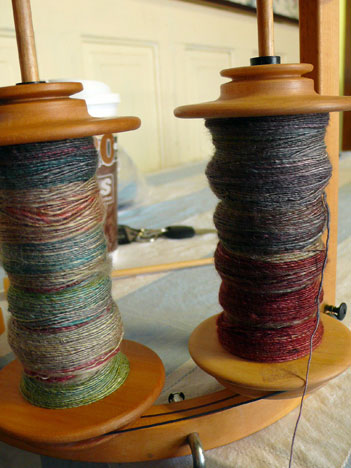 sundays are still for spinning and the gang arrived right on time at ten. linda has given up knitting for lent, which is wearing on her a bit, but she’s filling the void by spinning more. this week she spun up four ounces of creatively dyed wool/seacell/milk protein fiber (i don’t know what colorway it is, but if we’re really really nice to linda, she might leave it in the comments . . .). in class she worked on plying it 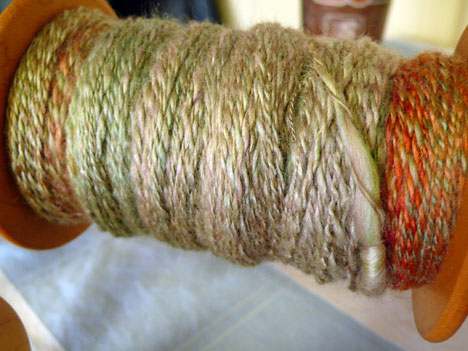 this was a challenging project for linda but i think she ended up with some beautiful yarn. and she has another four-ounce batch to match it.

i worked on my ongoing briar rose BFL project—the same 3-ply i’ve been working on all winter. the good news is, i’m almost done spinning that batch and i should be able to ply it up soon. i have dreams of it being enough to knit something substantial, like a vest.
after that, i have some alpaca that my friend debby brought me as a gift from the martha’s vineyard fiber farm which is burning a hole in my stash—i think i’ll spin that next.

anne marie showed up in her newest sweater, arianne. she actually had this finished a couple of weeks ago but i didn’t take pictures. 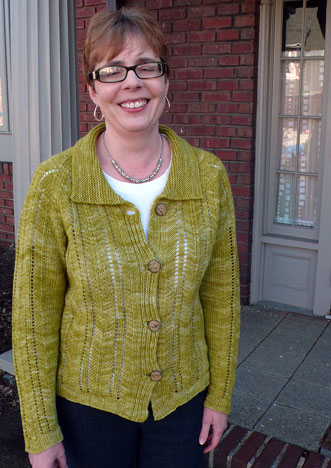 she bought this yarn from catherine when we went to the pittsburgh knit & crochet festival last month. this is catherine’s classic merino worsted in the pear colorway (same color i used to knit the lacewing shawl). anne marie knit this one right up when she got home from the show and now she has the perfect spring sweater. i’m so jealous.

i’ve been a blog slacker this weekend, i know (besides, time seemed to evaporate last week, no??). i’m trying to get patterns written, but i’ve been knitting some, too. 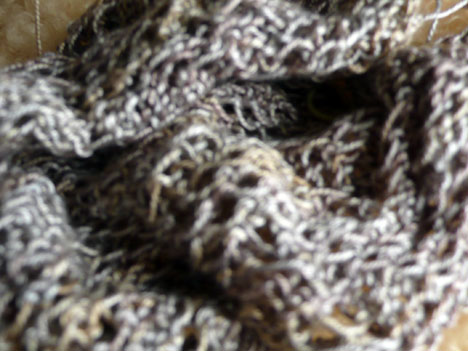 i got started on a secret project which needs to remain a mystery for a couple of weeks. i know you hate it when i do this, but the reason i mention it is that the color combination seems to be in the air—jocelyn is spinning up some fiber in the same colorway and so is kim (oooh, and while you’re at kim’s blog looking at the fiber, check out her awesome maplewing—how much do we love that mama mia colorway??). 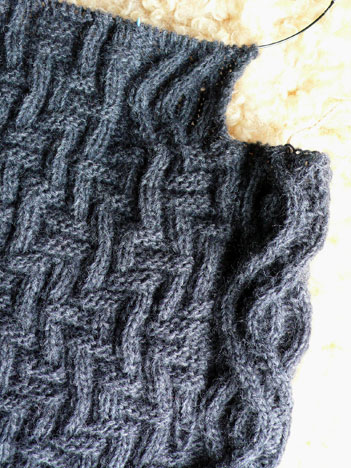 i made decision about what to do with my gray sweater and am working my way through the armhole/shoulder of the back—i used the same cable that i put along the side seam for the armhole trim.

and i’ve got the leg of bricker two knit—tonight i’ll add a heel and then i’ll be almost done. 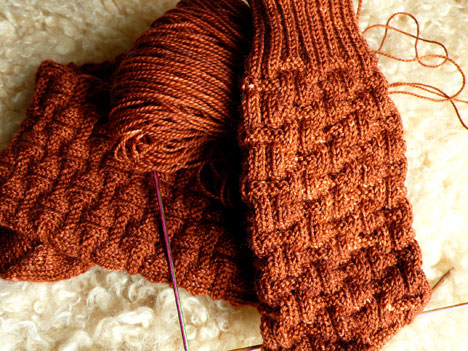 the pattern is all set to go now, thanks to our friend carol who test knit it so fast. i’m a little worried about my yarn supply—it’s going to be very close. this is often the case with david’s socks so i’m trying not to be too concerned, but it’ll be a nail biter—another reason i’m trying to get them as done as possible in the next couple of evenings. i really hope i don’t run out.

yesterday i put in a few hours at the stove for a cooking marathon—a big pot of soup, a fish sauce for pasta, and a casserole to fill the fridge for the week ahead. i wanted to cook a pan of curry as well, but all work stopped dead when i whacked a good-sized wedge out of the business end of my index finger on a can i was opening (beans for the soup). it was a gusher too—blood all over the kitchen. there i was trying to put pressure on the wound while scooping the last of the chopped zucchini into the sauce when i realized that the curry could probably wait til tuesday. sigh.

it doesn’t bleed now as long as i keep a tight bandage on it. and that first-aid cream with pain killer in it? it is, well, killer. miraculously, i can still knit as long as i don’t wear a brand of bandage with that sticky kind of adhesive and plastic—sticky and wool just don’t mix.

but i do have daffodils. 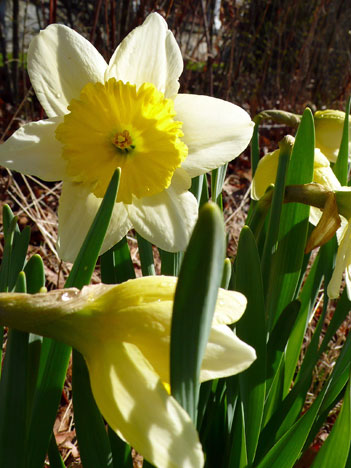 29 thoughts on “sunshine on a cloudy day”