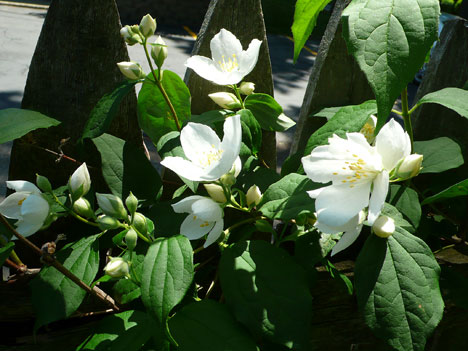 the mock orange bush is just beginning to bloom; i’ve been watching the buds for several days and finally, this morning, they were open. this is one of my favorite flowering shrubs—it gives off a heavenly scent i remember from childhood—we had a large one in the front yard at home.

ours has forced itself out of a tiny crevice between the huge oak tree and the back fence—it was just a slip of a thing when we moved in and now it is quite big with hundreds of blossoms each year. which i am highly allergic too, but i don’t care . . .

today we were back to our usual spinning class here and linda was finally well enough to attend, so we spent the whole time catching her up on the fiber show last weekend and the month’s news (she had pneumonia this month and couldn’t come to most of the classes). and well, spinning class just hasn’t been the same . . . 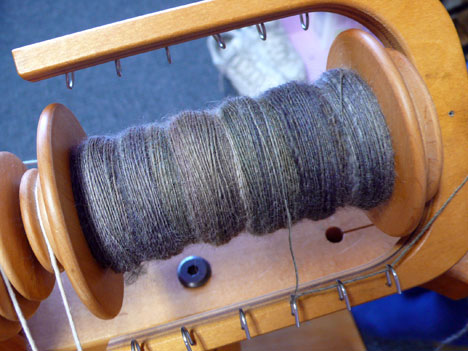 she’s working through a small bundle of briar rose BFL in a blend of grays with some plum and old rose mixed in. it’s going to be a 3-ply so she’s spinning fine and taking her time.

barb is also spinning some 3-ply from the same fiber for a sweater project, and brought some finished yarn with her but all my photos came out blurry and awful, so i’ll have to show that next time. 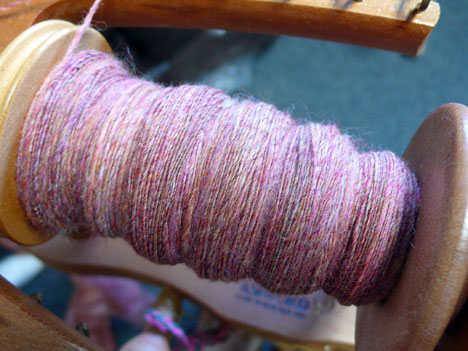 and i’m afraid i don’t know where she got this from, but maybe she’ll tell us in comments. anne marie is still working through a huge batch of dark brown coopworth, which she is spinning 2-ply for a sweater project.

we have been meeting in this class for a year now (already!), and i’m so impressed with everyone’s spinning. not just that they are making beautiful yarns and have gained such control over their tools and techniques, but that each one has knit with the yarn she made and has aspirations to knit ever-larger and more ambitious projects with handspun.

yesterday i was poking around in my “workroom” for something (it’s so hard to move in there right now, much less find anything) when i noticed the alpaca i plied two weeks ago still sitting on the bobbins in the lazy kate. i put it there “for a few days” to set the twist and forgot about it.

so i skeined the yarn up and put it on to soak while i wrote yesterday’s post, then hung it in the breeze on the porch 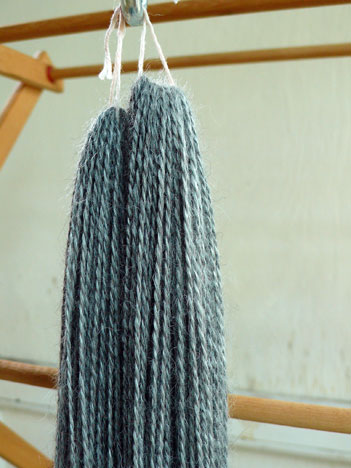 today it is nearly dry, so i brought it in for class show ‘n’ tell. this is a yarn that i truly thought i did not spin as well i could; i wasn’t patient enough to spin as fine as i thought it deserved, and i wasn’t all that careful about being consistent 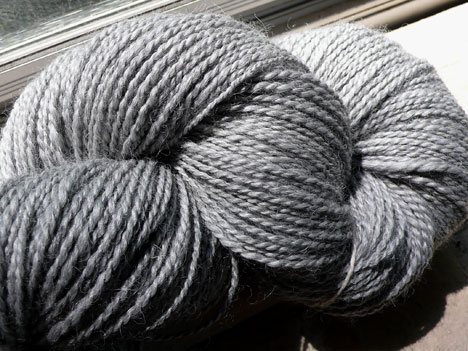 then, to make matters worse, i was sure i’d overplied it. but i soaked it anyway and when it came out of the bath it looked like it was hanging straight enough. 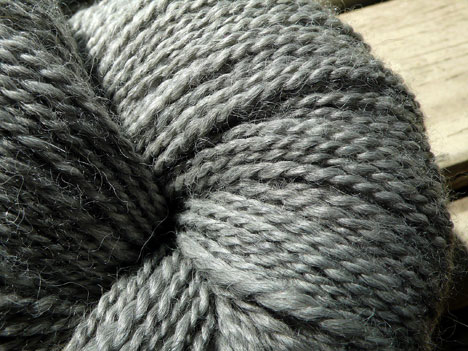 ok, that’s really all i have today—just a quick stop-off to update you on sunday spinning. it’s another gorgeous day out there so i think i’ll get outside.

i’ll leave you will a picture of the painted begonias, which wintered over indoors. we put them outside earlier this week and the new leaves are quickly unspooling into large wings splashed with color, a fitting image i think. 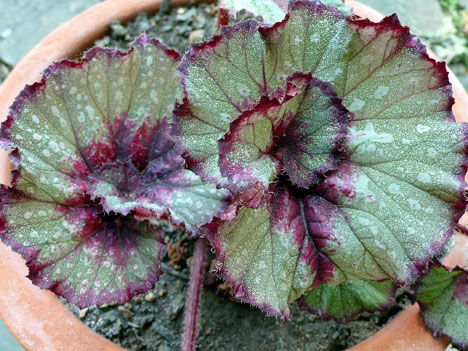