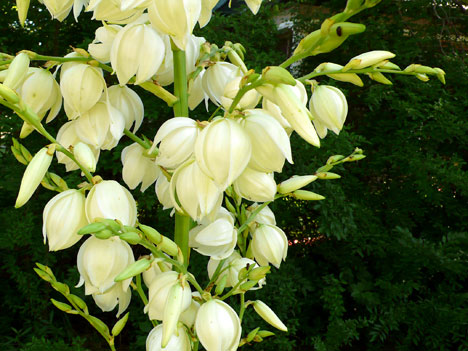 flowers popping out all over our yucca plant. our little patch of yucca has only produced flowers every other year til now (which is normal for them), so i’m thinking that these blooms belong to a propagated plant that has finally matured, and that we might now see blooms every year. 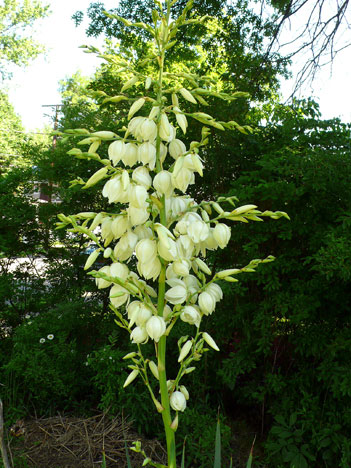 it’s always a surprise what will happen out in the yard—even after six years here, we are discovering new things about the plantings around our house. combined with our utter lack of planning for the decorative growing beds, it’s like getting a new present each season. 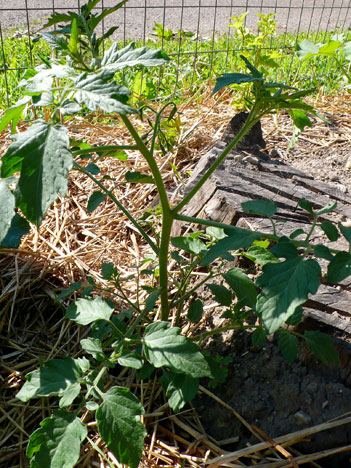 for instance, we always end up with a volunteer tomato plant or two and this year one chose to grow at the base of the old tree stump at the back of the vegetable garden. when i saw it come up there, i almost pulled it out, because surely it wouldn’t survive embedded in those weedy roots, right? but i left alone and it has already reached a nice little size. last year’s volunteer produced dozens of the biggest, nicest cocktail tomatoes i’ve ever seen, so who am i to judge? 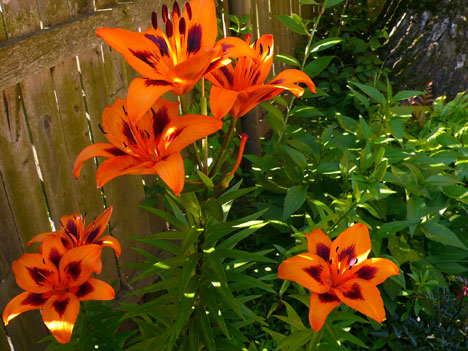 and now for an orange moment—roger sock patterns continue to go out the door at a nice clip and i’m SO so impressed with the number. a big thank you to each and every person who has purchased one for MS fundraising. if you want to know more, you can find out what all the excitement is about by clicking right here
.
thank you for your concerned notes about my problem lace the other day 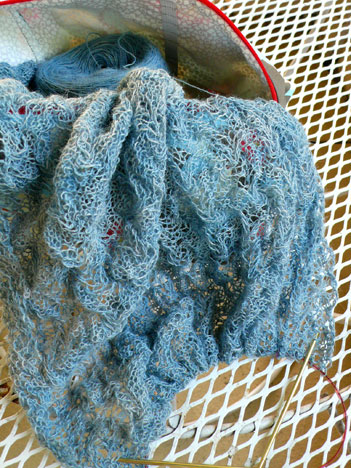 i left it alone for a couple of hours while we ate supper and took care of a few other things. when i finally sat back down with it, i fixed it 1-2-3, like it was nuthin’—i just needed to walk away from it and refresh my brain. i don’t even know what the problem was; as soon as i looked at it after the break, the fix was obvious and simple.
isn’t that just the way?

my last two evenings have been spent on working out a design for a new secret project, which i am partially struggling with (i’m totally excited about what i’ve got going on for the main portion, but having trouble finding the right stuff for the accent areas, arrghh).

this always makes me feel like i’m getting nothing done. when an idea needs marinating, there’s almost nothing that will push things along—it just takes time. so, late at night i’ve been working on socks just to feel like i’m accomplishing something. i also have a tendency to let my eye and mind wander to new ideas that seem more exciting than plugging away at problem solving.

in the “i KNOW i shouldn’t even go there” department, i’ve had this yarn for about a year now and have kept it at the front of my queue just waiting for my idea about it to completely pull together (like i was saying—sometimes it takes a while. hmm, but convenient that this one gelled when i’m stalled on the other one, eh??).
this is catherine’s classic merino superwash sock in colorway french marigold 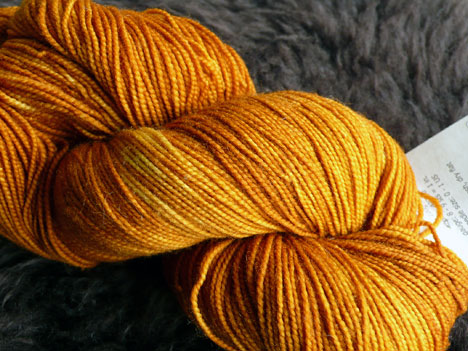 it has always wanted to be marigold socks, but i really didn’t know of any sts that might come close to expressing marigolds the way i visualized them in a sock. recently, i finally stumbled across what i think might be the right stitch pattern for it. and another stitch to go with it, yay.

so i did the naughty thing and wound the yarn. so far, that’s as far as i’ve allowed myself to go, but i won’t hold it against myself if tonight i fall down and knit a swatch (just a little one). it doesn’t hurt to have an extra sock on the needles, does it? but that’s it. seriously, i have other stuff to take care of.

i started my other regatta sock in the alternate colorway, a mix of neutrals 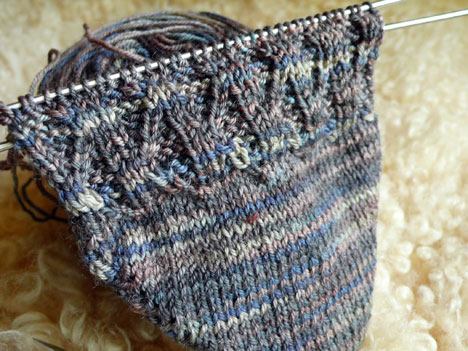 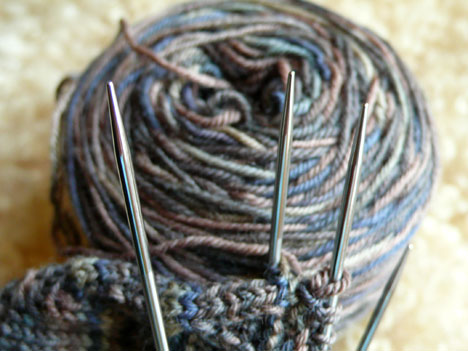 the needles continue to amaze me—we all know that the points are the talk of the town, but if you are a fan of very tiny needles, like these 2mm ones or smaller, i highly recommend them for their overall strength and beautiful stainless steel surface.

i like to use tiny needles now and again to work a heel or with a finer sock yarn, but everything i’ve had up to this point has either felt way too fragile (in the case of wood) or has become damaged with use 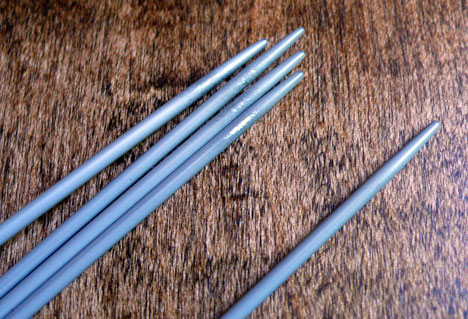 these metal ones that were my previous default for smaller-gauge knitting got scraped of their coating and bent in shape just from working two heels on them. okay, they are quite a bit less expensive, but if i go through several sets in a year, that adds up too. 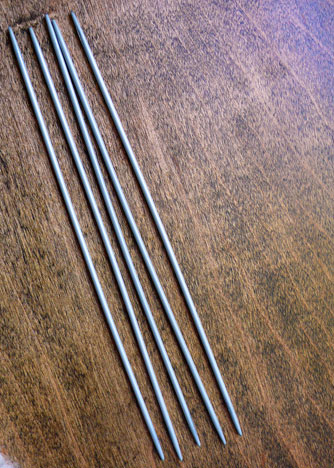 i prefer having tools that will last for years—i like my stuff broken in (but not bent).

we missed spinning class on sunday because it was father’s day, so last night we all packed our wheels off to anne marie’s house for a belated class, where we were joined by sam 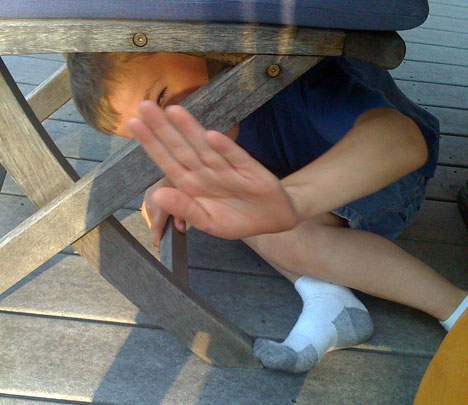 who otherwise would have had to come to my house, where we don’t have stuff a 7-year-old would enjoy so much (he thinks).

we had a great dinner with wine (not much, haha) and did some spinning for a couple of hours 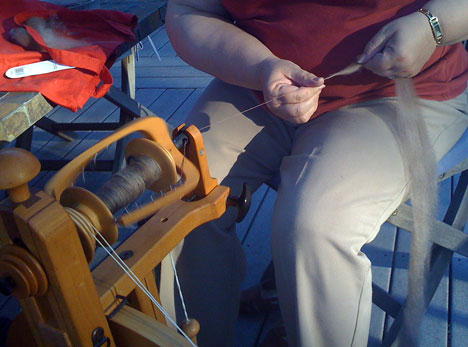 anne marie, linda, and i worked through a little more fiber while susan spent the whole evening on the inexplicably challenging task of winding yarn 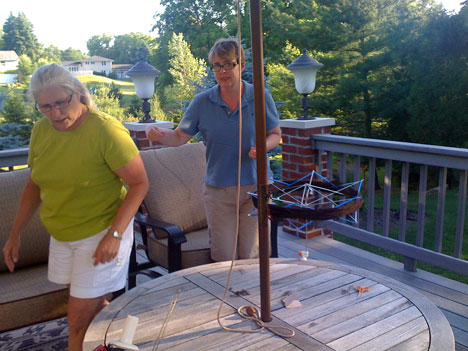 with anne marie on call to help out where needed (poor anne marie; i don’t think she even got ten yards of yarn spun). sam “helped” too as only a boy can at times like this 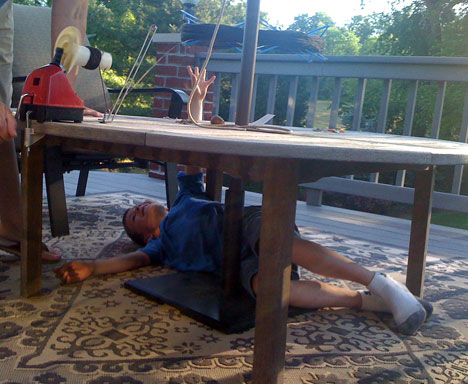 the under-the-table thing?? we have no idea what’s up with that—he’s not shy. 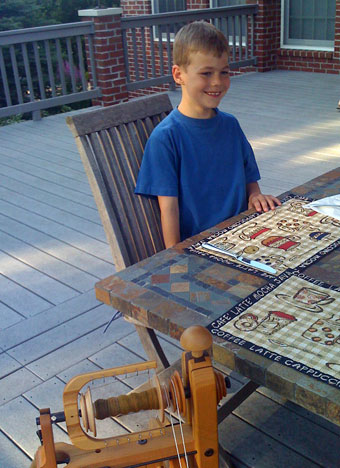 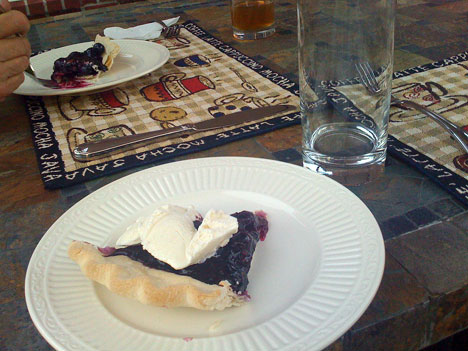 when the fresh blueberry pie was served. who could blame him?
after the pie we spun for just a little while longer and when the sun got low and the mosquitoes started drawing closer to the porch, we headed in to pack up and go. that was nice. 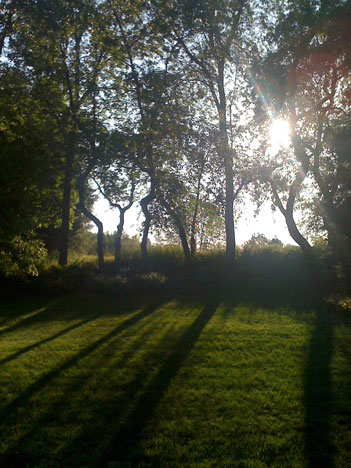 19 thoughts on “just walk away and let it be”