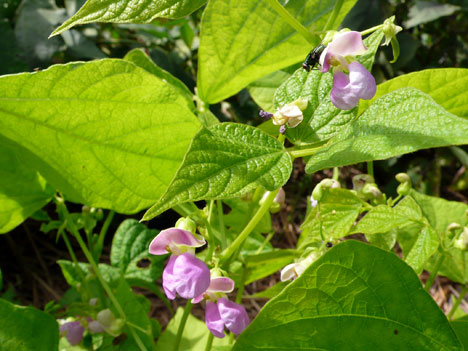 the green beans i planted just before i left for sock summit are flowering—if the weather holds out, we might have a little crop of fresh beans before any frost hits. if the weather holds—it’s chilly here and last night, the air was positively frosty after midnight (and it looks so springy in the photo, right?).

tomorrow it will be september—wow. it already feels more like october; we’re wearing long sleeves and sweaters in the evening. actually, it’s kinda nice that the calendar still says august, haha.

i had a great weekend, how about you?? i spent a lot of time knitting this weekend and it felt sooo good—just what i needed to right myself. my energy was really lagging all last week; it seemed to be taking forever to recover from traveling.

besides finishing up my gray maze sweater and the nightingale stole, i finished a little gift knit and started a wrap in the snuggly, luxurious road to china light sport yarn from the fibre company (compliments of kelbourne woolens). by spending most of my weekend knitting time on that, i managed to get the first half done and the second half started. 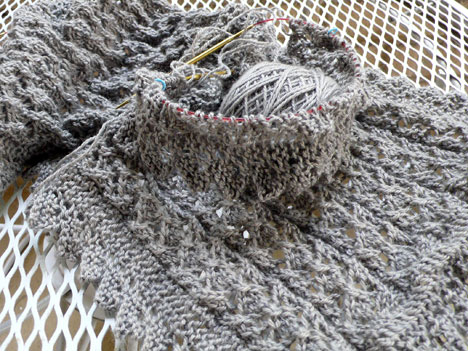 mmmm. this yarn is positively addictive—it’s a yak/camel/cashmere/alpaca/soy blend (which explains how easy it was to seclude myself with it all weekend) that has a halo of differently-dyed fiber so that it offers up a luminous, iridescent glow in the light. 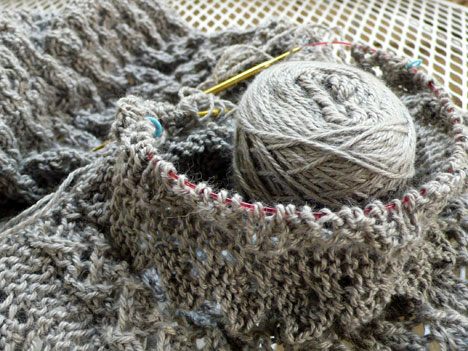 my colorway is grey pearl, which has a faint halo of blues and yellow-gold (and is, unfortunately, very difficult to photograph). but in some of the colorways the halo is quite distinct. karolyn, who test knit the piece, made hers in a gorgeous tomato red with tones of gold—just incredible. this will be a wonderful fall wrap and we’ll be showing you a lot more of it soon (it’s knitting up so fast i can hardly believe it).

i love the mix of stitches in this piece so much that we’ll also be knitting up a triangle shawl to coordinate in another fibre company yarn called canopy—a bamboo/alpaca/merino blend that is a little lighter-weight and drapier. i’m hoping to get that piece on the needles this week.

yesterday morning we met again for spinning class. not all that much new there—my bobbin is a little more full of very fine cashmere/silk singles

i am spinning this quite finely but it’s going a lot faster than i imagined it would—the chasing rainbows fiber is so beautifully prepared that it spins like a dream. i always forget what a pleasure it is to spin silk; it’s so smooth and pleasing in the hands . . . it feels even more luxurious in fiber form than in yarn.

what i didn’t do this weekend was work in the garden—note you haven’t see that for a while—and i probably should have. oh, i got some picking done (that’s pretty easy), but the beds could really use some cleanup and sorting. we had torrents of rain for a couple of days though, and i just didn’t feel like mucking around amongst the soggy mess. now that it’s dried out a bit, maybe i’ll get out there one day or evening this week. it just needs a couple of hours of attention—some dead-ish plants need pulling—i could use that space to transplant some okra 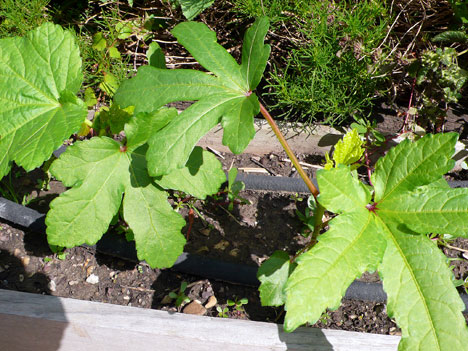 it’s funny—i transplanted the red okra into the ground before sock summit and those plants are doing only so-so, having been found yummy by insects. i had some extra little starts that i threw into the lettuce boxes just for somewhere to put them and those took off beautifully. so now they have outgrown the boxes and will need some ground space.

if i pull a couple of squash plants, that will make plenty of room—some of the squash has stopped producing, having fallen prey to powdery mildew or something, and some of it is still chugging away nicely 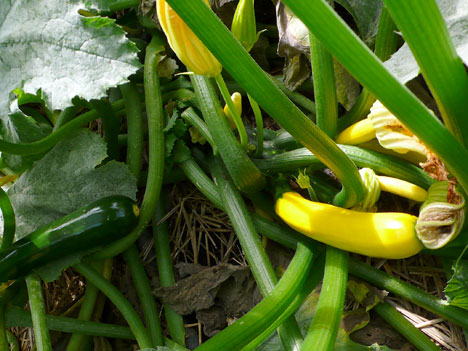 once i got the huge squashes cleared out, it took about a week for the plants to start putting out new squash but there they are—plentiful as ever. it’s nice though; since we had a little break form squash for a few weeks, i’m actually craving it again (and there are knitters to feed, hehe). 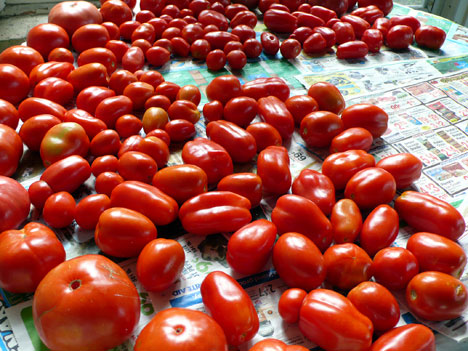 the tomatoes might be petering out now—while i picked several baskets at the beginning of the weekend, there were not all that many today (or, maybe the cool weather has just slowed things a bit). they might be taking a rest, or they might be retiring for the season—time will tell. at any rate, there are certainly a few plants that are done and need to be pulled. 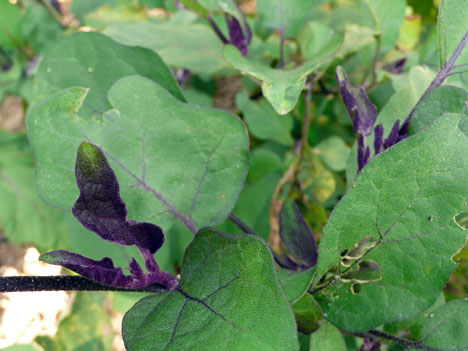 the eggplant are going through their usual late-august rejuvenation period—now that the japanese beetles are gone and and the air has cooled a bit, they are putting out voluptuous new leaves and flowers, free of holes from munching bugs. 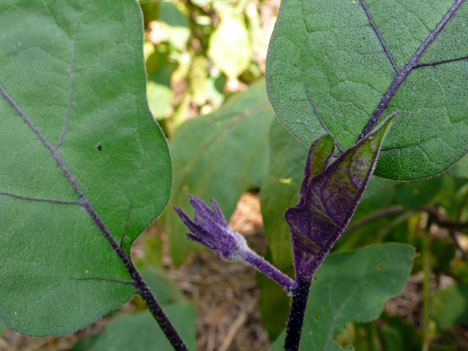 so we’re ending a little break where the fruit was kinda small and sparse, and i expect they’ll be back to regular production soon. i grew four types: these very dark purple indian ones that produce a long, narrow fruit with pointed ends which cooks very quickly (great for stir-frying); the miniature “fairy” type that grow fruit the size of eggs, literally, and have pretty, light pink buds 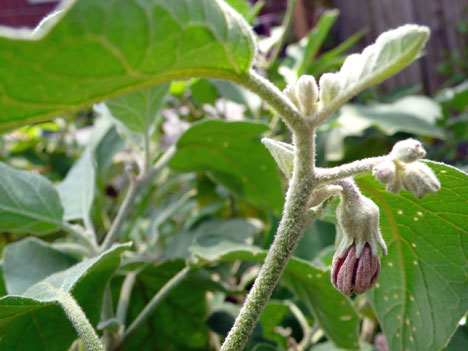 another miniature type that produces (excuse me, ladies) long, hard fruit with rounded ends. and then the regular large purple globe type. all are putting out leaves and buds like mad and a few flowered this morning 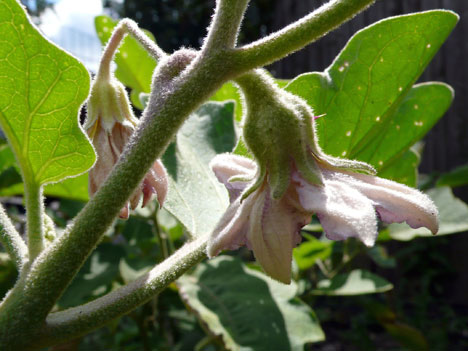 we should have an abundance of them in a week or two.
if the weather holds—i’m not kidding, it feels like it could frost before the middle of september this year. bummer—i love that we eat from the garden into october most years . . . on the other hand, the freezer is jam-packed with vegetables, so we have plenty in the event that the party ends early (but i’d so love to cook a dinner fresh from the garden for kim when she arrives on october 13th for a pre-rhinebeck visit . . .). 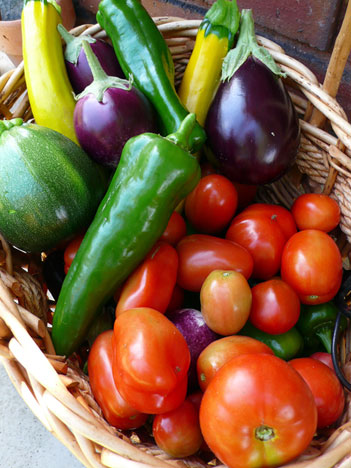 in the meantime, my most pressing garden concern shall be what to make for dinner tonight and will i have time/energy afterward to roast some more tomatoes and eggplant?