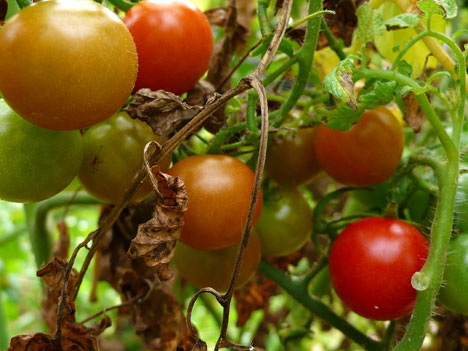 i can’t get over the resurgence of my cherry tomatoes—even as the very plants brown and die back, hundreds of them are popping out in plump bunches all over the vines, turning ripe on a daily basis (and they’re tasty, too). i’ve been gratefully gathering them by the bowlful because they are the one thing i’m a little short of at the close of this season. i dried two sheets of them this week and i think i can plan on getting a few more, at least. 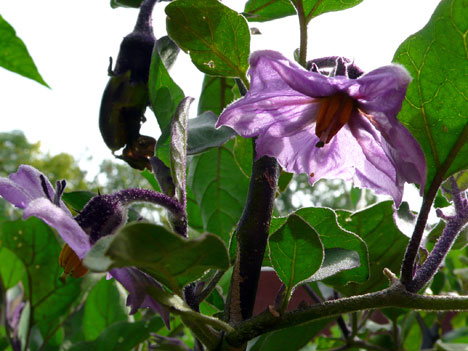 about ten days ago, my friend norma (one of my all-time favorite bloggers; i never miss reading her) wrote a wonderful series of posts, here, here, and here about the payoffs she derives from having a vegetable garden (ps; while you are there checking out her garden haul, please consider getting in on her raffle to benefit the red scarf project, a most worthy cause). 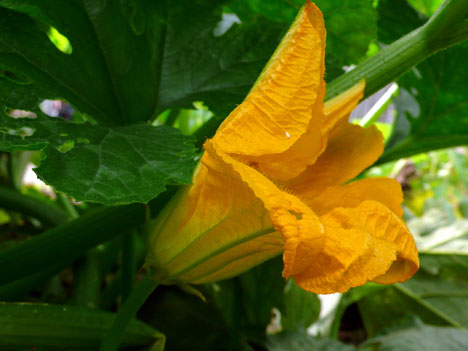 friday being the only sunny day we had all week, i thought it would be nice to stretch my back and take a walk in my own garden to see what i could plan on picking this weekend and snag some pictures of the early-autumn activity. 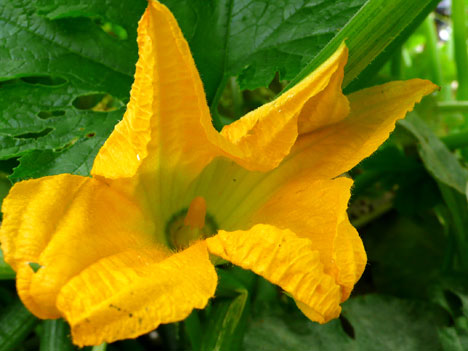 once i got out there, i suddenly saw my garden the way norma talked about hers, from an end-of-year perspective, and realized that it will all come to a close soon. not quite yet of course—because it’s not over til jack frost visits—but soon. i’m giving it about three weeks—that’s what i sorta feel in my bones.

from some angles the garden looks pretty sad right now 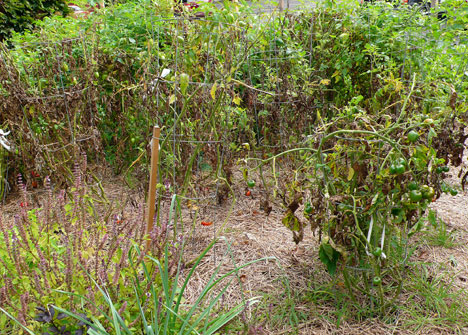 hahaha, that’s almost embarrassing—the corner closest to the back door has been hit a little harder with various insect damage, spotty fungus, and what have you, so we lost a few tomato plants by the end of august. but once you make your way inside, it still looks beautiful, at least to me 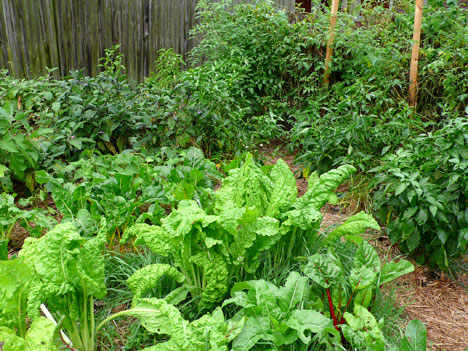 everything is still flowering profusely and producing regularly. i can’t cut the greens often enough and we’re still picking lots of squash—a first for us.
peppers, tomatoes, and eggplant always produce til the frost hits—we’ve just had so many more this year that we can’t think of another new thing to do with them.
i wish i had time every day to cook a fresh meal with it all. 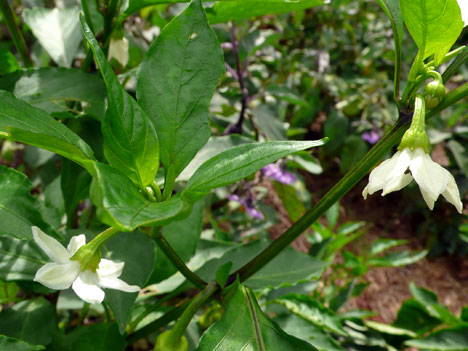 while i do miss the zingy taste of really fresh food during the winter, i’m never too sad about the garden’s yearly demise—i admit that by october, i’ve wearied of spending a couple hours each day dealing with tending plants and cooking heaps of vegetables.

the things i’ve put on hold throughout summer become more urgent and i’m happy to turn my attention to them once it starts getting chilly.

honestly, i haven’t dared count up yet how many of everything we’ve put up for winter from our garden, but our freezer sure is scary-full of food right now.

i know—there are a couple of spaces there, but i have plans for those. believe me, the uploading of the freezer is very carefully paced through the summer and fall. if we fill it too fast, we can’t find (or move!) anything til february and we haven’t treated ourselves to enough fresh food. too slow, we could get caught unawares by jack frost with a bare cupboard. it’s a process worthy of a statistician or public planner . . . or both. 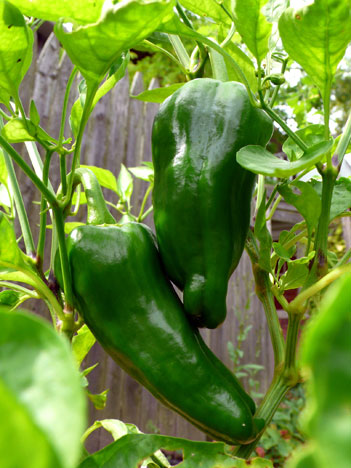 we’ve netted somewhere in the neighborhood of 36 quarts of tomatoes, 24 cups of tomato paste, 3 quart bags of dried cherry tomatoes (and counting), 20 bags of greens, 15 bags each of summer squash and eggplant, 6 quarts of ratatouille, a few curries, stuffed peppers, roasted peppers, tomato sauce, and other sundries i can’t remember. let’s just say . . . a lot. 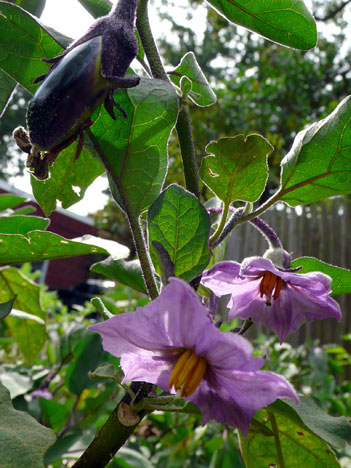 in fact the rain this week, after such a dry month, has resulted in all manner of acceleration. i skipped going out there for three days and on thursday i came inside with a big basket filled with squash, eggplant, and peppers, plus another one filled to the top with tomatoes.

it’s kind of stunningly wonderful to be overwhelmed with this plenty. our neighbors and our weekly knitters have all enjoyed it along with us (thank goodness) and continue to do so. 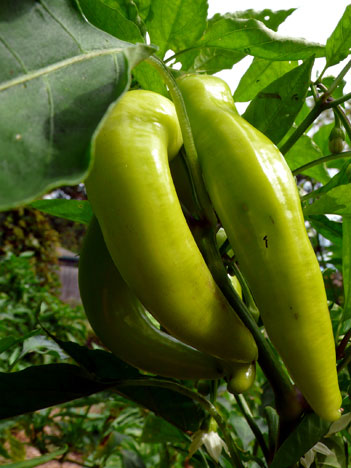 not everything was a grand success—our asparagus bed continues to be a big disappointment after three years of trying; we may need to start completely over next year. sigh.

we planted strawberries for the first time and got only a few, not-very-tasty berries. i heard that this is to be expected the first year, so i’m hoping next year will be better. the patch is filling out 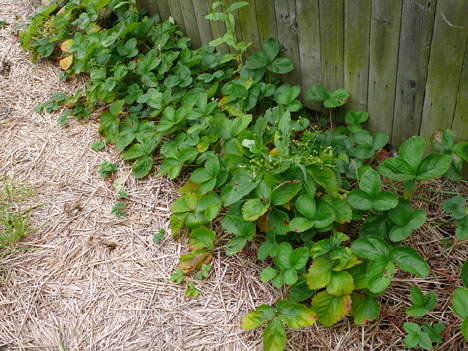 so we should get more berries. i’ve been keeping them trimmed back so they don’t invade the rest of the garden, but i AM allowing them to trail under the fence to take root in the back yard 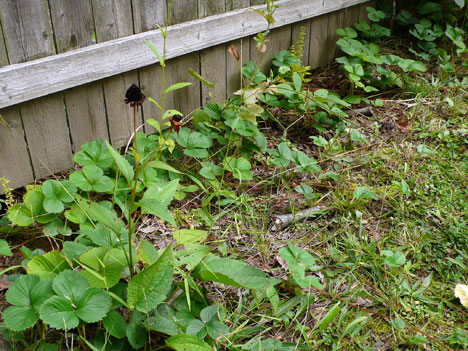 where the lawn is so pitiful. nothing would make me happier than having a strawberry field take root there to replace the “grass”.

my experiment with starting okra after july 1st resulted in almost nothing. only a few plants even made it after transplanting and those are just now producing maybe a couple of tiny okra

not even enough for a taste.

and then there are my zen greens, which i grow every year because they are so easy and tasty. they grew fine—bigger and better than ever—at the end of the greens patch, but starting in august, i encountered a problem with them that i never had before 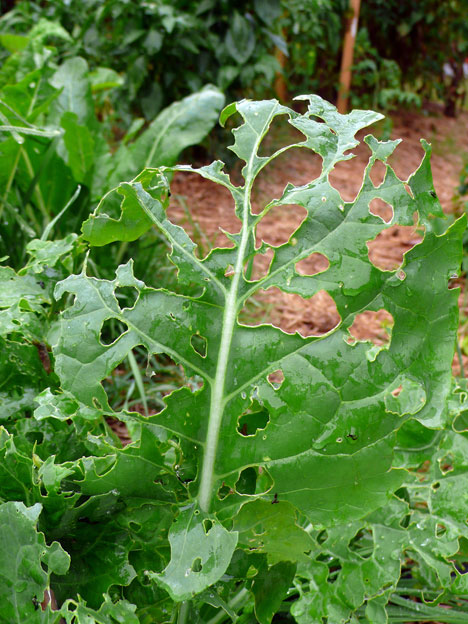 (lace is everywhere)
i couldn’t figure this one out for the longest time—only these particular plants were getting eaten—none of the swiss chard or other greens right next to them were affected. they do not have bugs anywhere on them—what could it be? and why only these greens?

well, today i got my answer to the first question, at least 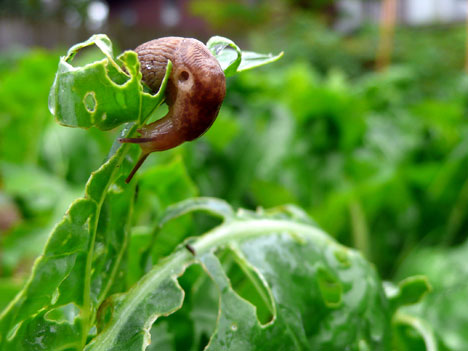 slugs—just look at him go. i still don’t know why they eat only these plants and none other, but i do know that next year, i’m putting down some coffee grounds (they supposedly hate caffeine) or some similar deterrent around the zen greens.

which brings me to the other incredible aspect of the garden—that, no matter what kind of year we have with it, good or bad, it offers a constant source of amusement and blog fodder for me, and hopefully, for you too.

from the delicacy of vegetable flowers, captured in their brief moments of ripest beauty 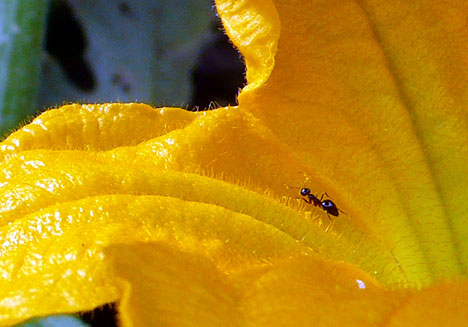 sometimes i see just one rare thing, but friday i saw so many—my interest was especially captured by the lemon (or lime) balm flowers i hadn’t noticed before. 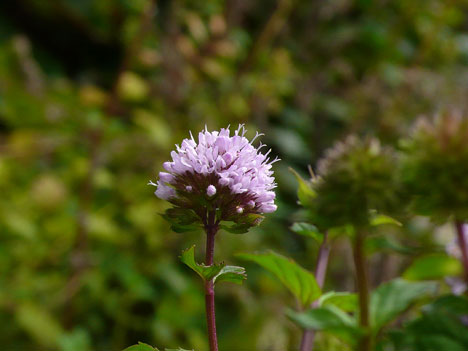 i don’t know how long they’ve been out, but they struck a nice chord there in the dye bed—pretty purply blooms surrounded by foliage going all gold and orange—a beautiful autumn palette. 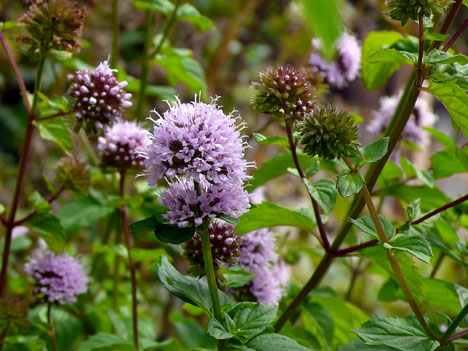 some of them haven’t opened yet and those look like raspberries or blackberries, sort-of. 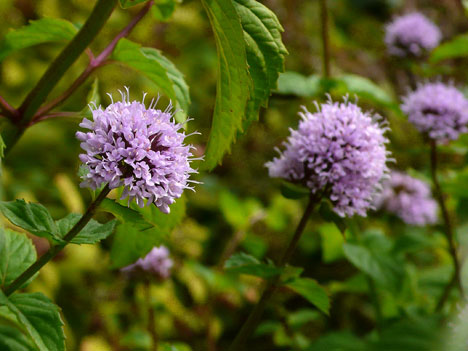 there i was snapping one picture after another (sometimes in the light, it’s hard to tell if the photo will be good, so i take a ton just to be sure), when a little visitor touched down nearby 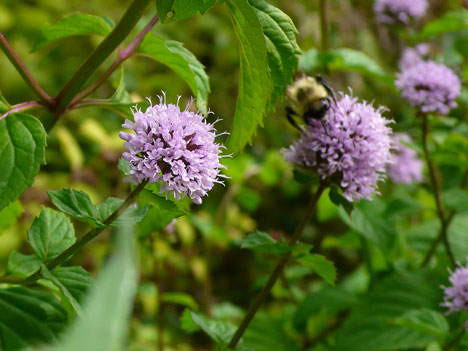 and for once, i got a fantastic series of bee photos. bees are really hard for me to capture, as they are constantly moving—even when they have settled in to collect, their bodies vibrate vigorously, creating a blur in the picture.

but yesterday there were a few magical moments—maybe a minute total, when i managed to get it right—watch this 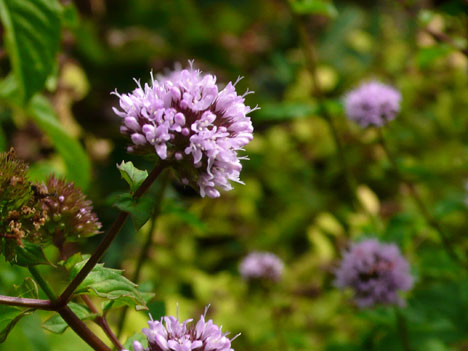 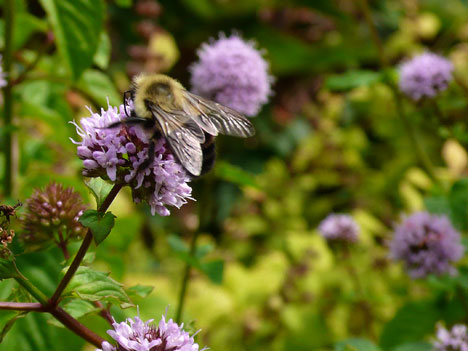 he moves a little, but stays right in front of me (he wants me to check out his butt) 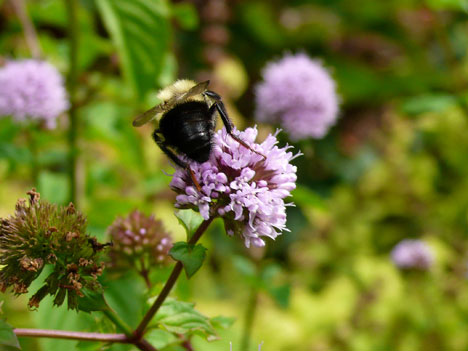 and flies off.
but wait—he doesn’t go far before selecting to visit another bloom nearby

look at him dig into that, smooshing his face deep into the middle—it’s kind-of intense . . . for a few minutes anyway, until a different flower captures his interest gotta get all over that one, too 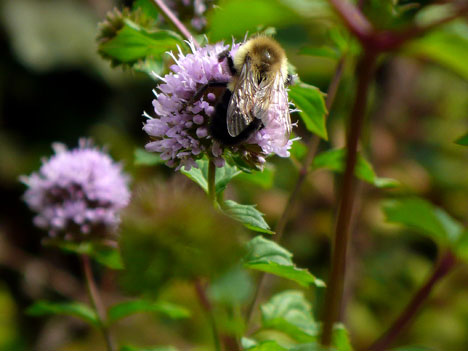 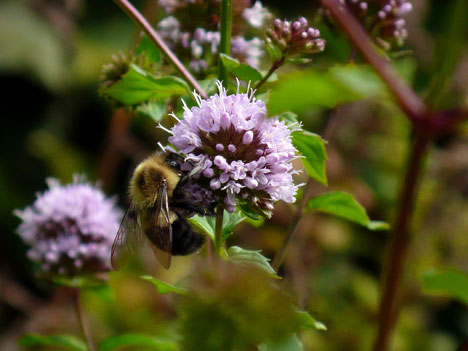 i finally decided to back off and leave him to his business—it was starting to feel a little invasive, heh. 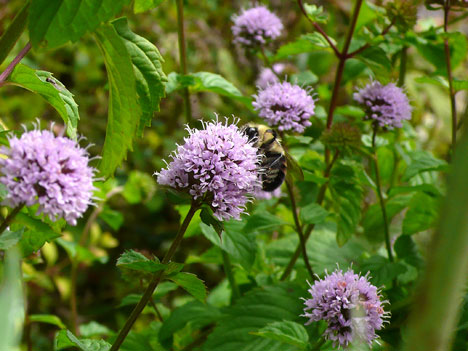 this won’t be the last garden post, but maybe the last long one. it’s hard to tell.
it’s that time of year when the chill in the air reminds me to turn more energy toward my work—soon everyone will be looking for new gift knits and items to ward off the cold and i must be ready with something to offer. knitting calls.

35 thoughts on “fall of the garden”