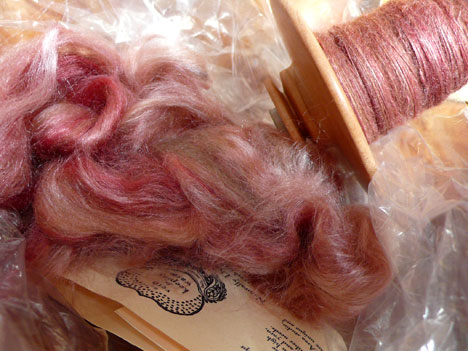 with the hope of finally finishing the singles i’ve been spinning from this AVFKW baby camel/silk top (colorway taboo), i was busy at the wheel by 9 am, a full hour before my class was due to arrive. i worked continuously for the next three hours, but alas, at the end there was a handful of the stuff still in the bag.

excruciating, isn’t it?
is it me, or does it feel like i’ve been working through this two-ounce packet of fiber forEVUH? (looks like i started spinning it on october 5th, so yeah, it has been a few months. oh, the shame of it)

any sane person would look at that last little bit of top and spend part of the afternoon finishing it up. but it will have to be plied, too and if i go down that path, it will be 7 pm before i know it, with nothing else accomplished today. so for the moment, the spinning will stay in its sunday morning time slot—there’s always next week. and with so little spinning left to do, i should be able to ply it up during that class as well.

like i said yesterday, this weekend is really about organizing myself to pick up where i left off on my WIPS. i feel as if all my prechristmas knitting is foreign to me, like a family of cousins i’ve been out of touch with—what should be familiar about them feels so very far in the distant past . . . 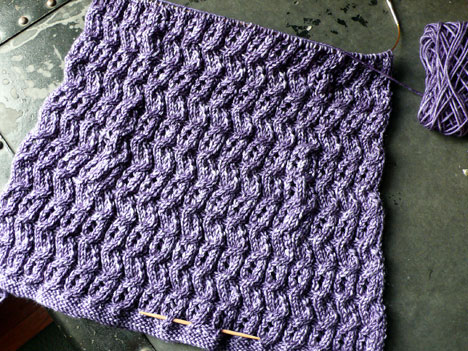 thanks to that low-key post holiday feeling all around the blog and store (and a week’s worth of yummy leftovers in the fridge), we were able to eat a leisurely meal and clean up before 7 pm last night.

after supper, i put on my current book and started back in on my henley sweater. i’m on a john irving jag right now, rereading (well, listening to) everything i read in high school and college, plus anything i hadn’t read in recent years (i missed a few during my 30s); i’m just sorry that my library doesn’t have more of his work in audiobook format. long, long books are great for sweater knitting—i’ve noticed that when i work on the pattern later, i remember details about the knitting and the writing more clearly because the two are paired together in my mind.

anyway, the last time i worked on this project was december 14th, when i had just started the fourth version of this piece—the first three tries resulted in lots of knitting with serious gauge issues that ended up being caused by a yarn flaw.

i’m happy to report that the fourth time seems to be the charm—everything is working out as it should and so far, i’ve not made any grave errors that require ripping back yet again. i think i’m over the hump. i should be able to get this piece knit to the underarms today and maybe even further (but i do have to start another secret project, so maybe i’ll pause at the underarms). i could very well have this sweater done before i leave for california, which would be awesome; david and i could do a couple of photo shoots on the beach (we still have to photograph sprössling, too). 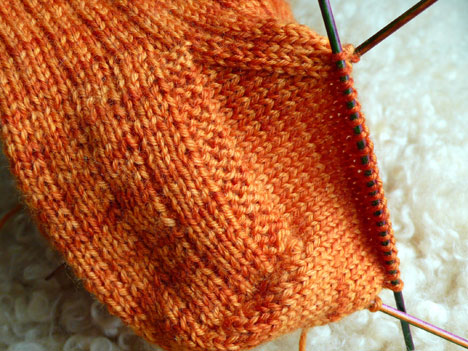 later last night, i worked on my gansey sock while we watched a swedish movie i liked a lot. i got through the heel and into the foot, which means it will be done in no time. now that i’m past that point, i can put the final touches on the pattern and send it for proofreading.

i promised the other day to continue the yarn parade and today’s featured dyer is beata, of hedgehog fibres in ireland.

beata and i got to chatting on ravelry one day—i had been drooling over the examples of her dyeing i’d seen and she offered to send me some yarn. when i went to take a look in her shop, i was blown away by her colors and her fiber selection. laughingly, i told her to just pick something and surprise me—i was pretty sure anything would be gorgeous and perfect for any knitspot project.

well last week, just before christmas, a rather large packet arrived in the mail, which, upon opening, revealed a wondrous selection of splendiferous yarn and fiber. i’ve been drooling over it ever since (it’s sitting on the stairs so i can appreciate it every time i walk by; i can’t bear to put it away yet). and of course, i’m dying to show it to you.

fair warning though—you might want to lean back and loosen a few buttons before scrolling further . . . are you ready? 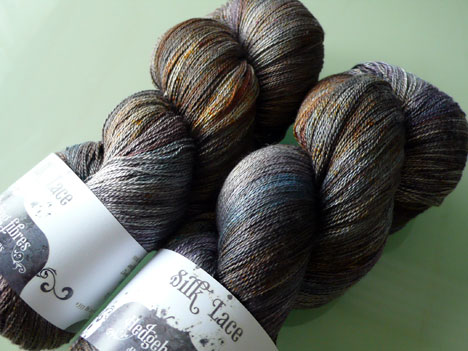 first up, her silk lace in the hurricane colorway. this is the color that originally sucked me in when i saw urkigurki knitting it into an autumn arbor stole. those beautiful rainy-day grays and bruised plums will always be a favorite with me. 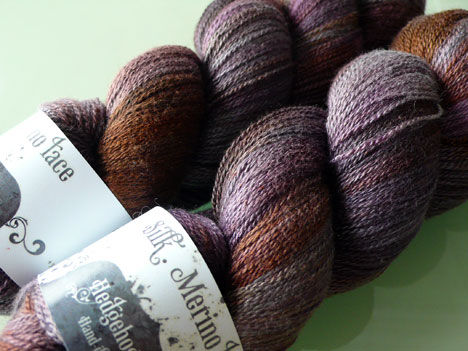 and if a hurricane doesn’t rock your boat, how about this silk/merino lace in thunder? can you see a dilemma developing already?

oh, but that’s not all . . . hang on to your seat, because next, there is pure cashmere lace in colorway opaline 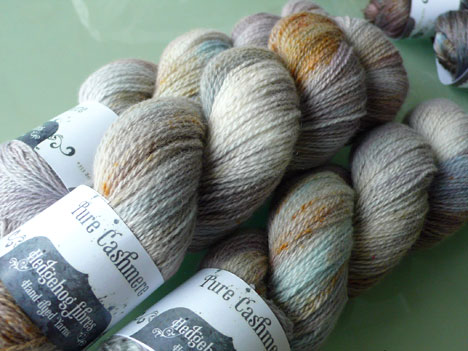 honestly, i did not imagine it could get better after the merino/silk, but opals are my favorite gem and cashmere is pret-ty, pret-ty high on my list of favorite fibers. these three skeins are simply ethereal.

ok, deep breath—let’s take a break for a sec (but just a sec).

because, well, beata does spinning fiber too, and since this is spinning sunday

here we have three packets of her silk merino spinning fiber in tulips (front), gemstone (back left), and old song (back right).

how about that, eh? can i get you a glass of water or a fan??
BTW, i’ve used mostly ravelry links because beata’s etsy shop is a little low at the moment (understandably), though i’m sure it gets updated pretty frequently.

i have yet more yarn to show you next time and a sock to release this week AND we have a special fun promotion for you to participate in—check the next post, coming right up . . .

(david seems to have found a further use for his first knitted christmas sweater, which he literally wore to death—he’s recycled it now into a draft dodger for the door of the TV room, hee-hee!)

17 thoughts on “feet back on the ground”