That shawl you’ve started looks lovely. Is it your own pattern? I’ve noticed that you seem to knit a lot of shawls. Do you actually wear them a lot? I’ve knit only 1 shawl so far, but I’ve never worn it. I’d like to wear it, but I guess I just never find the right situation. 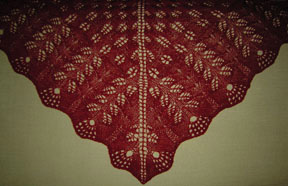 now it is later, and i want to make a sample and write a real pattern. i’m so glad i chose this yarn; it’s as soft as a cloud and the color is gorgeous. it will be interesting to see how the different yarn changes the piece. and, i may digress from the original and just do one allover stitch with a small lace edging. i don’t know yet!

since i am at home about 90% of the time, i actually DO wear some of my shawls; especially this year with keeping the heat down (ditto for fingerless mitts). i keep one in my office and one in the TV room. i am not, however, one of those admirable people who wear them with such flair as outerwear, even to the supermarket or LYS.

i need to be a little philosopical for the next couple of posts, as i ‘ve been kind of torn about not knitting sweaters this year (it’s dangerous for me to sit and think, as i did this morning). some years i get more into sweaters and other years, it’s shawls. this year, obviously, it’s been the latter. why do i love knitting them so much?

i don’t knit shawls primarily for functional use, though they ARE incredibly versatile. to me they are the perfect balance between function and true art, both in the making, and the result. they are the knitting of my soul, whether fascinatingly lacy or sturdy, humble garter stitch. . to knit one is to become involved completely in creating beauty; you knit one stitch after another, and this delicate lovliness falls from your hands. amazing.

i enjoy giving them as gifts and have made several as wedding veils. this winter, it is true, i am on quite a tear with making shawls. over time, i have probably made more than a dozen of them. they are excellent gifts for “life events”, such as weddings, new babies, landmark birthdays, or serious surgery. one of my life projects is to knit a shawl for each of my brother’s seven children and my goddaughter (i have three done).

and maybe after that, i’ll knit a shawl to cover the earth . . . hahahahaha!
i think maybe it is like my grandma making one afghan after another; so many, that even she lost count.

now i have two sitting here that need to be stretched this weekend. one is the japanese feather stole that i completed last weekend. the other is one i finished last summer, and of course it has a story! 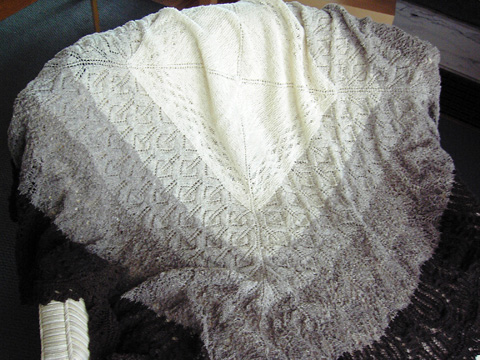 i started this piece about 5 years ago, when we were working out of town and living in a hotel for 10 months. i made several pieces in that hotel! this is knit with morehouse merino lace-weight, in all their natural shades. the idea i had was to design a shawl that progressed from cream at the center to the darkest chocolate at the edges, using motifs that represented the four seasons. the center pattern is seafoam for snow in winter, the second pattern is candle flame 2, which reminds me of buds in spring, the third pattern is maple leaf, for the leafy summertime canopy, and the fourth pattern is frost flowers, for the lacy plant skeletons seen in late autumn.

i got about two-thirds of the way through it, and put it aside because i was on the third shading and had changed patterns, but did not like the new pattern. i had to find and decide on, a new stitch pattern to continue, and i could not make a decision.
i pulled the project out from time to time to think on it, but did not come up with a solution til last year. i finished in january 2005, and at that point, it had 1200+ stitches around the perimeter on a 40-inch circular needle.

i needed to knit on a border, which meant i had more than 2400 rows of border lace to do; 2 rows of edging for each perimeter stitch, plus extra rows to turn the corner). can you spell B-O-R-I-N-G? i got about 10 inches done, and put it aside. then in july, i decided that each evening while i watched the Tour de France (did i ever say that we are big cycling fans and bike riders?), i would knit on my border. mind you, it was HOT last summer. having a shawl on my lap all evening was a challenge, but if Lance could do his bit, i would do mine. and he DID (ya gotta love that guy)! and so did i.

and today, nine months later, it is blocking day! i was woman enough to finish it last july, but i was NOT going to block it in the summer. the humidity here is high, and it would have taken a week to dry.

of course, the real magic of making a shawl, is that you never actually know what you have until you get it off the needles. and then it’s too late to cahnge anything; if you aren’t happy, you might as well just leave it alone and knit another one.
and there are a few things i might have done differently with this; maybe it could be a little smaller (whoa, it’s 60 inches already, unstretched!), or maybe i could have proportioned the patterns better, but overall i am very happy with the outcome. when i see it in this photo, my inner critic is quieted. 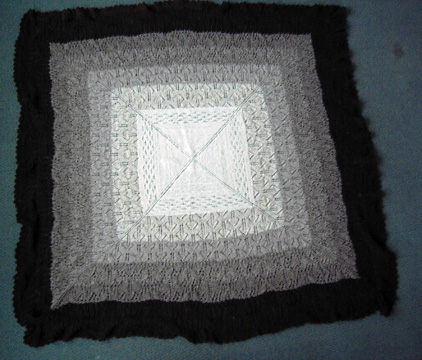 always at this moment i think, wow; it it so much more than i ever dreamed or intended it would be. it is surely magic at work, and not these hands that result in this.

so now is the time! the house is dry, dry, dry, and the light is beautiful. i better get to it.

One thought on “objet d’arte”