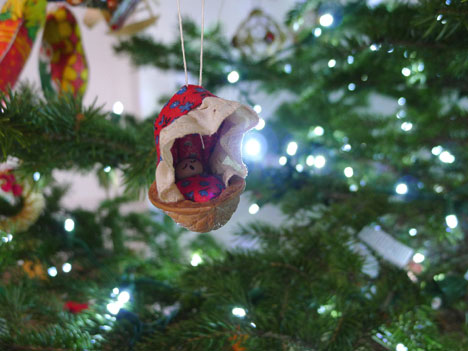 has everyone been having a nice holiday? here in ohio, santa has been very good to us indeed, bringing us family and good food and a bit of distraction from our usual busy pace.

micah is entranced with this ornament of a little baby snuggled inside a nutshell. he’s informed me several times that it doesn’t need to be on the tree; he knows a better spot for it (probably safe inside his pocket, haha). this is actually one of my oldest ornaments, handmade by someone special and gifted to me when i was about twenty years old. i’m torn—i want to give it to him to take home, but even MORE, i want to look forward to seeing him enjoy its magic it each year when he visits; i think that’s important too. i remember that growing up, it was fun to know that when we visited this aunt or that godmother, our nana or grandma, there were special fascinating items we looked forward to seeing each time as part of their homes. 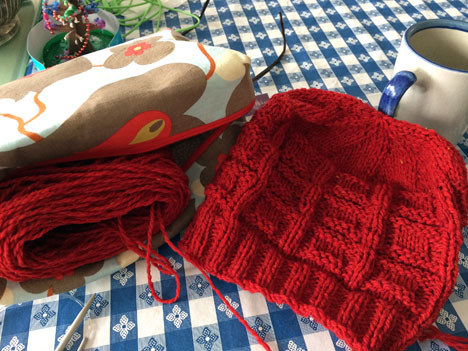 christmas day was a bit dark and damp, a good day to stay in to cook, knit, and enjoy each other’s company. amad and i were up very early as usual (we are always the first two out of bed). i had started my last two christmas knitting projects just the night before, using our december club yarn and pattern (the pattern is exclusive to our FIFC 2013 club, but you can still join as an eBook member here or here). well, i didn’t get much further than row three before my eyes began to close and i had to go to bed. so up early christmas morn; we made ourselves some tea and coffee to sip while i knit and amad played on his tablet.

by ten o’clock i had the first cap done and was started on the second. when i was about halfway through it though, i had to take a break to get dinner started—we had a bunch of cooking to do! we’d postponed our feast of fishes from christmas eve (as is traditional) to christmas day, when we could take things at a more leisurely pace. i had cooked the calamari sauce the night before and put the bacala in its marinade while nan made tiramisu. i still needed to prepare smelts for frying, bake the marinated bacala, made our salad of oranges, anchovies, garlic, and pepper, and cook some pasta.

i knit a few rows here and there throughout the afternoon, while the pots bubbled or when there was a lull. 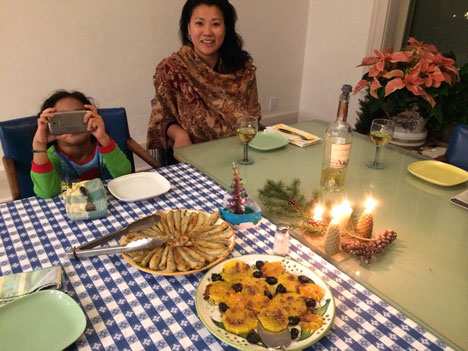 soon it was time to eat—first the appetizer of pan-fried smelts with our slide. i honestly thought that amad and micah would be much more hesitant about eating these foods which were foreign to them, but boy-oho-boy was i wrong

they fell upon their plates like they’d never seen food before, exclaiming the whole time and fighting over the last little fish and orange slice. i suddenly felt myself channeling my grandpa who used to chuckle out loud while watching us eat. 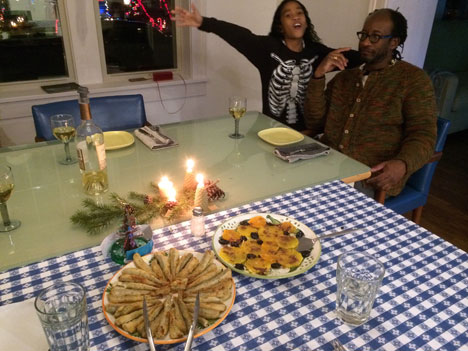 (amad is currently into photo bombing; we have to watch him like a hawk whenever the camera is out)

i was worried they had filed up so much on those dishes, there wouldn’t be room for the pasta with calamari sauce, but i was proved wrong again—they emptied their bowls and even ate dessert a little later. wow. 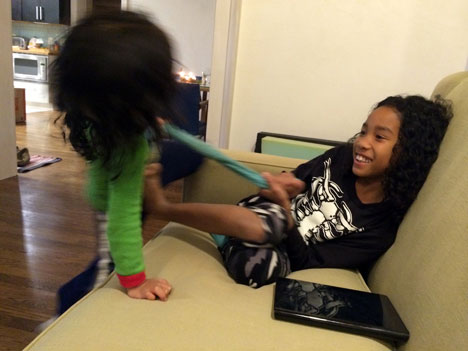 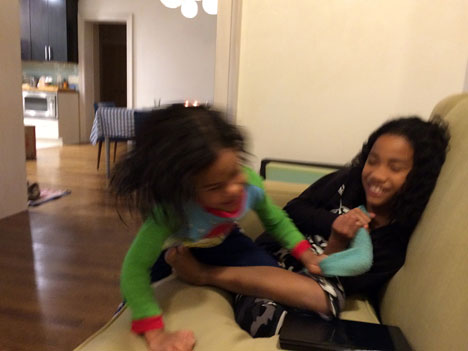 a little after-dinner ninja fighting so the food could settle before we opened gifts, gave me some time to work the last decrease rows on the second hat.

i finished up while we drank our coffee, just in time for the opening of presents. (stop laughing—i know you’ve gifted mitts without thumbs before and little cowls that were still warm from your hands!)

next came an hour or so of insanity while presents were distributed and unwrapped. the boys weren’t expecting anything because their big gift was a trip to ohio, but i had a few things for them, like fun swag i’d collected from races and a couple of backpacks filled with race t-shirts (seriously, they love those trophy shirts). 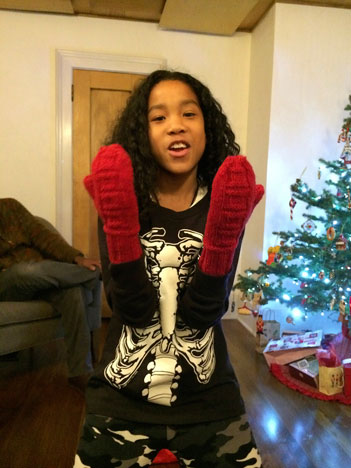 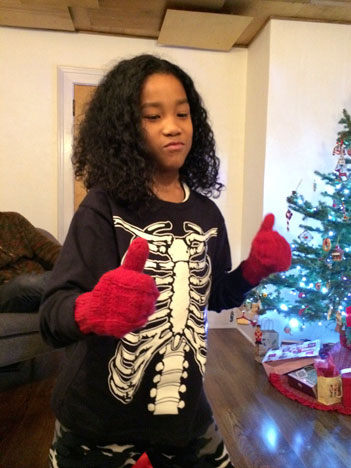 the hats and mittens were a huge hit—they don’t really need these in las vegas, but they do need them here. much better for playing in the snow than fingerless mitts. 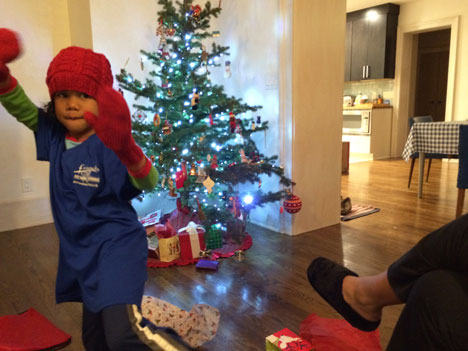 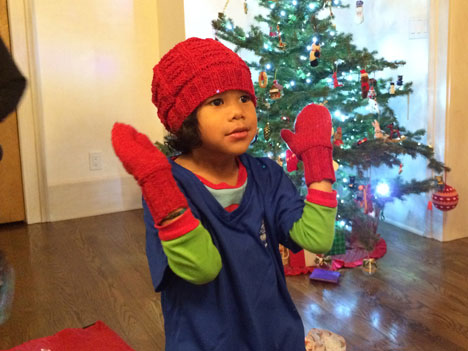 and everything fit great, with a little room to grow as well. so they can wear them next year when they visit! 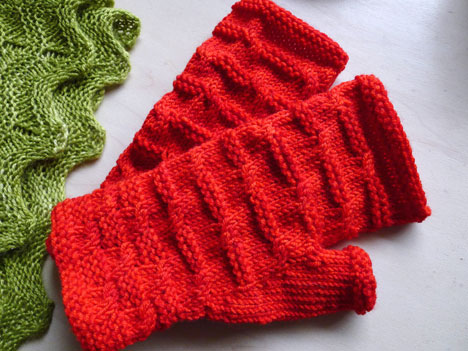 once those gifts were done, i got back to work on the bocce mitts and hat, a set to coordinate with our baci scarf or cowl. i really like how the mitts came out; now to knit a blue pair to go with the blue bocce hat i knit earlier this week. i have to weight my leftovers to see if i have enough for the mitts; if not, i may ask anne marie to send hers. 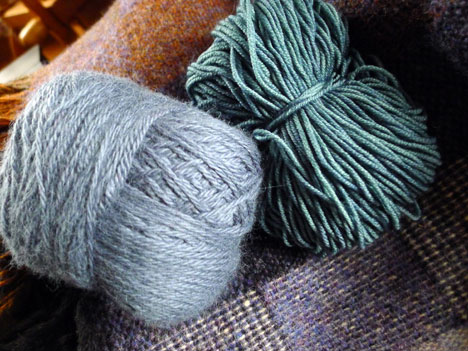 alternatively (and probably more conveniently) i was thinking of using this shibui alpaca yarn, which actually is a much better match than it looks in the photo, though a different texture. it might be nice (and certainly educational) to see how the mitts knit up in an alternate yarn. decisions, decisions . . . 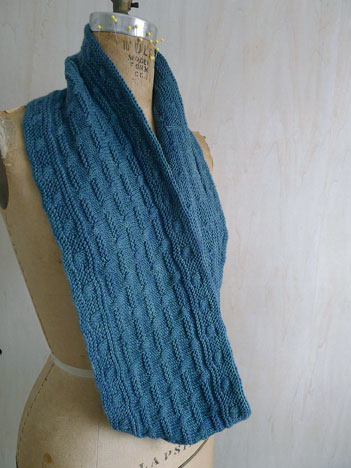 speaking of the baci scholarship fundraiser pattern, i have an update on our goal, which is to match last year’s scholarship of $3500. we are about two-thirds of the way there, with a total so far of about $2200. we have a few days to go and there are a couple of ways you can help, even if you’ve already purchased a pattern or kit or even if you can’t spend money yourself.

please tell a friend (or two or three!), mention it at knit group or your new year’s eve gathering, put it on your facebook page, tweet it, tumblr it, or instagram it—feel free to grab a copy of the pattern photo from our product or blog page and post it with your recommendation.

tell friends that if they purchase a pattern we give the entire sale price to the red scarf scholarship fund and if they purchase a kit, we give MORE. we would love for a miracle to help us reach this goal. thank you everyone for your contributions. 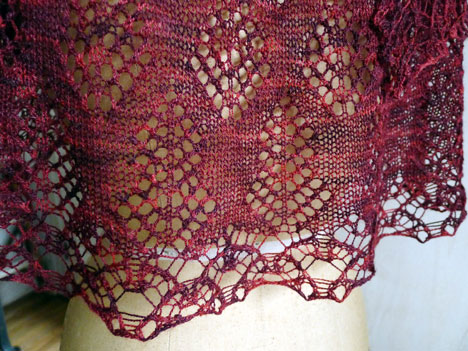 in these last few days of the year, i’ve got to get some secret project work done as well as the hat and mitts pattern written up so it can go to proofreading. our first new release of the new year, maybe? hmm no, i think that will actually be one of the new shawls i was telling you about last time.

but first, we are enjoying the end of our visit with nan and the boys—they’ll go home the day after new year’s and we’re spending these last couple of days getting a new year’s even celebrations together (nan will cook thai food, MMM-mm). yesterday we shopped at our local asian market and took a trip to the apple orchard swell, giving uncle david an afternoon of peace and quiet (he took a nap, haha). 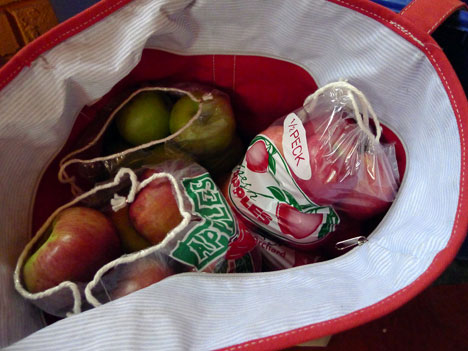 and there was also ample opportunity on that fine, spring-like day for photos 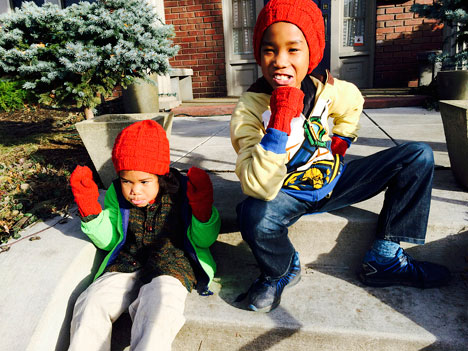 i think we were doing incredible hulk on the left and spider man on the right.

it will be much too quiet here after they leave; i can barely think about it.

i’ll be back soon, probably new year’s eve or new year’s day—i’ve got a stack of books on the corner of my desk that is staring me in the eye, begging to be written about. i’m thinking they are part of my new years resolution and trying to find just the right way to honor them. 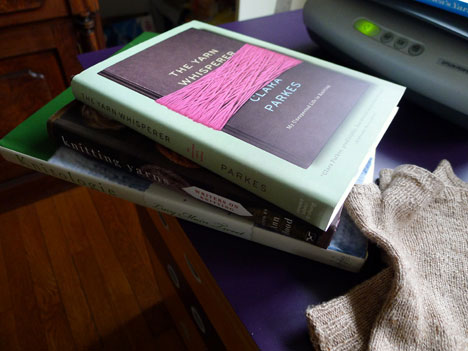 and now we are off to the akron museum of art for the afternoon; i can’t wait!